Cats are endlessly fascinating, and we have the facts to prove it! Check out 39 fun cat facts and read on to learn more about each.

1. Cats meow for their humans, not other cats

Domesticated cats have evolved alongside humans long enough to know that certain sounds and tones will get us to do as they please. Cats will communicate with different meows to get us to feed them, comfort them, and even adopt them.

2. A group of cats is called a clowder or a glaring

You can also refer to a group of cats as a clutter. A group of wild or feral cats is called dowt (or dout) and destruction. Best of all, a group of kittens is a kindle.

If your cat does possess the gene, it will only come to fruition between 3-6 months of age; a kitten any younger will not react to catnip, one way or the other.

4. Research suggests that a cat’s purr has the power to self-heal

One of the most precious cat facts we’ve learned: The purr isn’t just for when your cat is happy—purring helps cats to cope with illness and stress, and the vibrations may help an injured cat’s bones heal.

5. People with cat allergies aren’t allergic to fur, but rather a protein found in a cat’s saliva, urine, and dander

The protein is called Fel d 1. Non-neutered male cats typically produce more of it than females and neutered males. The Balinese and Siberian breeds are also thought to produce less Fel d 1.

6. There’s a reason dogs look up to you and cats treat you as an equal

Cats have been domesticated for a much shorter time than dogs (a difference of 5,000+ years). Simply put, cats have not evolved long enough as domesticated pets to realize that you are their “owner”.

7. Your cat brings you prey as an act of kindness

When a mother cat kills dinner for her family, she offers it to them wholeheartedly, and does not eat it herself. Likewise, your cat considers you part of her family and would rather offer you her killing than consume it on her own.

8. Your cat’s love of boxes satisfies an animal instinct

Cats seek out boxes and enclosed spaces that offer cover for their predatory hunting instincts, as well as to hide to avoid becoming prey—an instinct passed down by their wild ancestors.

9. Cats don’t see in black and white—but they are somewhat colorblind

Cats see colors on a limited spectrum; research suggests that they are red-green colorblind, and mostly see the world in blues, greys, and yellows. However, they can see in a mere one-sixth of the light that the average human requires to see clearly.

10. Cats need to scratch on things

Scratching is part of a cat’s nature. Cats scratch not only to sharpen their claws, but to stretch specific muscles in their back and shoulder area that they cannot otherwise reach through normal stretching.

11. A 1-year-old kitten is developmentally equivalent to a 15-year-old human

The age-old formula to that you should multiply your cat’s age by seven to convert it into human years is incorrect. Cats do the majority of their “aging” in the first two years of their lives.

12. (Most) cats are lactose intolerant

Get your cat facts straight: Cats are only equipped to digest dairy when they are very young. Even then, they are only meant to drink the milk produced by their own species.

13. Cats instinctively know to use the litter box

To avoid being eaten or attacked by predators, ancestral cats had to cover up their tracks and hide their waste to mask their scent. They gravitated toward soft dirt or sand, since their granular consistency made it easier to bury their waste. (And now a self-cleaning litter box will do that for them!)

Your cat’s whiskers contain an abundance of nerve endings and are more deeply rooted than the rest of his hair. This makes them ideal for helping your cat perceive what’s ahead as he charges nose-first into unchartered territory.

One of the tabby’s most distinctive features—the “M” shape on the forehead—has been the subject of folklore for thousands of years, from the ancient Egyptians to the birth of Jesus, and more.

16. Black cats as Halloween symbols is rooted in ancient tradition

On Samhain (the Gaelic festival that was the precursor to modern Halloween), it was believed that a large black cat with a white spot on its chest would bless any house that left a saucer of milk out for it to drink, and curse those houses that didn’t.

17. Your cat has a third eyelid

Your cat’s third eyelid functions as a shield for his cornea. Scientists also think that humans once had a third eyelid: Through the course of evolution, it was reduced to the tiny pink fold of tissue in the corner of your eye.

18. Cats are imitating snakes when they hiss

Snakes are seen as some of the most fearsome predators in the animal kingdom. Just like snakes, cats hiss to sound intimidating and to try to scare away whatever is threatening them.

Instead, she is crepuscular, or most active around dusk and dawn. House cats have learned to find a compromise between their humans’ daytime activity and nighttime solitude. This is also why your cat is more likely to beg for food around dawn and dusk.

20. How long cats lives largely depends on their environment

One of the more sobering cat facts: Indoor-only cats have a typical lifespan of 12 to 20 years; on the other hand, outdoor-only cats typically live for 3 to 10 years.

The 2018 study also showed that left-pawed and ambilateral (or using both paws equally) animals tend to show stronger fear responses. It’s one of those cat facts you may or may not have use for.

22. Cats almost always land on their feet due to their impressive “righting” reflex

Cats also survive falls of a great distance because they reach terminal velocity—the speed at which the downward force of gravity is matched by the upward push of wind resistance, resulting in a constant speed—much sooner than large animals and people.

23. Their pee smells so bad because cats originated in the desert

Cats have very concentrated urine. Cats originated from the desert and evolved to absorb a large amount of water from their urine to maintain their hydration.

24. Cats are more likely to “knead” if they were separated from their mothers as young kittens

Nursing kittens stimulate their mother’s milk production by kneading on her. So if a kitten is bottle-fed by humans from the time of his birth, he may not be as likely to “make muffins” later on.

25. Cats can hear better than humans and some dog breeds

Cats hear higher frequencies than humans do (we can hear up to 20 kilohertz, dogs hear up to 40 kilohertz, and cats hear up to 60 kilohertz). This doesn’t explain why pets are often afraid of loud noises, though—that is likely psychological in nature.

26. Cats knock objects over and off edges to test for hidden prey

Your cat’s instincts tell her that a paperweight or knick-knack could turn out to be a mouse. Her poking paw would send it scurrying, giving her a good game (and possibly a good lunch).

27. Cats like to eat grass because their wild ancestors did

In digesting the leafy contents of their prey’s stomach for generations, it’s likely that wild felines passed on a tendency to want to consume plants to their offspring.

28. An entire ancient Egyptian city was founded to worship the feline deity Bastet

Cats certainly got the royal treatment in ancient Egypt. About 80,000 feline burials were discovered in 1888 in a tomb in Middle Egypt. Cats were even buried with provisions like milk and mice in the form of a royal offering.

Polydactyl cats have extra toes on one or more of their paws. Hemingway received one in the 1930s, and collected them at his home in the Key West until his death. Today, close to 50 polydactyl cats roam the Hemingway Home estate.

The chromosome linked to coloring in cats is the X chromosome; therefore, female cats (XX) have two sets of genetic information that can determine their coat color. Two X chromosomes are needed to create the black and orange coat that is found on tortie cats and (when mixed with white) calico cats.

On the other hand, only about 1 in 5 orange tabby cats is female. As we learned before, the chromosome linked to coloring in cats is the X chromosome. Because females possess two Xs and males possess XY, male cats only need the orange gene from their mothers to become a ginger—making them much more likely to carry on the trait.

Cats possess a chemoreceptor in their taste buds that prevents them from tasting sweetness. This is why your cat isn’t all that interested in your sugary treats, fruit, and other sweet-tasting foods.

33. Kittens can be born with a temporary “fever coat”

Fever or high stress during a feline pregnancy can sometimes produce a temporary effect on kittens known as “fever coat,” or fur that is a silver-type color, rather than a color that would arise through their genetics.

34. Cats involuntarily open their mouths after smelling something

This is called the flehmen response: Your cat is analyzing a new or strange smell—but instead of doing so through the nostrils, he is “scent-sucking” through the roof of his mouth.

35. A litter of kittens can have two or more fathers

It’s called superfecundation and occurs when a female mates with two or more males, resulting in the fertilization of two or more ova from the same cycle from separate acts of conception.

36. Cats try to bury their food for the same reason they bury their poop

It’s to “cover their tracks.” Cats’ wild ancestors avoided detection by predators by masking their scent and tracks, usually through digging and burying their waste or leftover food.

37. Your cat likes to chase lasers because movement excites the prey drive

They also like to chase lasers because they’re honed to hunt and chase small prey in low-light conditions.

38. Cats may be attracted to catnip and silver vine as mosquito repellents

A recent study concluded that cats have instinctually “anointed” themselves with silver vine and catnip to help protect themselves against mosquito bites for hundreds of years.

We know that cats dream because cats, like humans, experience rapid eye movement (REM) sleep. Cats can also be simultaneously asleep and awake, with their sense of smell and hearing remaining active during most of their sleep. 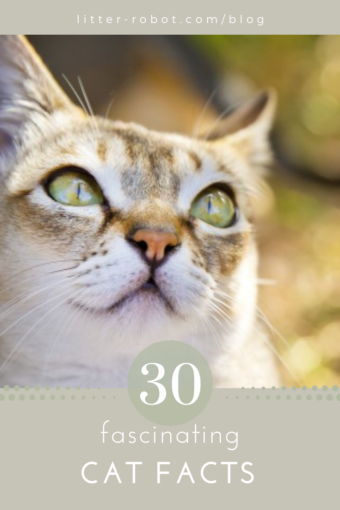