How Smart Are Cats?

Ask someone “How smart are cats?” and you’ll probably get varying answers: The feline lover will glow with pride, offering up countless anecdotes demonstrating their furbaby’s unmistakable intelligence. Anyone else, well… they’re more likely to point out that cats achieve a tremendous amount of satisfaction from sitting in a box. So, who is correct?

How smart are cats? What science tells us

While there are entire labs dedicated to studying canine cognition, few studies have been conducted relating cats’ behaviors and their overall brain physiology. Kristyn Vitale Shreve, a cat cognition and behavior research fellow at Oregon State University, explains in a PBS article that “there’s this perception of cats being untrainable or maybe hard to work with. Cats display a lot of individual variation and have distinct personalities, which make it hard for researchers to understand them.”

How smart are cats compared to dogs?

Ah, the age-old debate. In late 2017, a study published in Frontiers in Neuroanatomy offered findings based on the gray matter found in animals’ liquified brains (the bodies of which were donated post-mortem, of course). It turns out that dogs have twice as many neurons as cats—530 million in the cortex on average compared with 250 million, respectively. (Humans, on the other hand, have around 16 billion neurons.)

Before you go breaking into a chorus of “dogs rule, cats drool,” consider that scientists caution against comparing the intelligence between two species based on gray matter alone.

Brian Hare, the founder and director of Duke University Canine Cognition Center, states that “asking which species is smarter is like asking if a hammer is a better tool than a screwdriver. Each tool is designed for a specific problem, so of course it depends on the problem we are trying to solve.”

What this boils down to is an obvious but sly truth: Different species are intelligent in different ways. Therefore, the intelligence of cats and dogs must be viewed on a spectrum of problem-solving skills most critical to their respective survival and reproduction. Cats, for example, excel at hunting, while dogs, pack animals, prevail in social training.

How smart are cats? They can tell time

This little boast applies to many animals, though. A 2018 study in Nature Neuroscience published the findings that “a previously unknown set of neurons turn on like a clock when an animal is waiting.”

Waiting For You Clock GIF from Waitingforyou GIFs

The researchers focused on the medial entorhinal cortex, an area located in the brain’s temporal lobe that is associated with memory and navigation. Northwestern University details that the team “set up an experiment called the virtual ‘door stop’ task. In the experiment, a mouse runs on a physical treadmill in a virtual reality environment. The mouse learns to run down a hallway to a door that is located about halfway down the track. After six seconds, the door opens, allowing the mouse to continue down the hallway to receive its reward.”

Eventually the researchers made the door invisible in the virtual reality scene. Surprisingly, the mouse still knew where the now-invisible “door” was located based on the floor’s changing textures. The mouse also waited six seconds at the “door” before abruptly racing down the track to collect its reward. This behavior, according to the team, displays that animals use an internal sense of time to solve tasks.

So—now you can feel even guiltier about leaving your cat home alone all day!

How smart are cats? It may depend on the breed

Just as distinct personality traits run in cats, certain breeds are more recognized for their intelligence. It’s no coincidence that these breeds also tend to be more sociable and interactive with their humans. In no particular order, here are some of the most intelligent cat breeds:

Of course, that’s not to say your domestic shorthair isn’t as smart as one of these breeds. Every cat is wonderfully unique, and must be appreciated for their distinct qualities. Although there aren’t enough studies to qualify general feline intelligence, one undeniable truth points toward how smart cats are: They’ve managed to completely manipulate us humans! 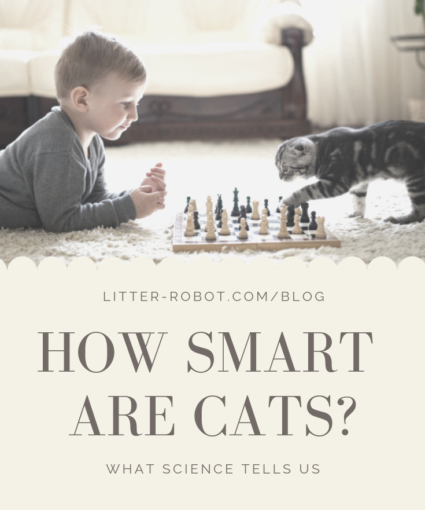