While we’re a few days away from the glitz and glamour of the Academy Awards, we decided to start our own viewing party early—with Oscar-winning movies featuring cats, of course! From Gone with the Wind to last year’s Best Picture winner The Shape of Water, we’ve rounded up 20 films to “purruse” this weekend. (Fair warning: Not all of the cats in these Oscar-winning movies have happy endings.)

The Civil War epic following the story of Scarlett O’Hara and Rhett Butler clocks in at 3 hours, 58 minutes. Sadly, cats only comprise a couple minutes of the film. One ironic cameo includes a shot of the sundial outside the Twelve Oaks plantation, which reads “Do not squander time. That is the stuff life is made of.” In front of the sundial, two cats are sleeping in the shade.

Cat, Holly Golightly’s (played by Audrey Hepburn) orange tabby, is seen throughout this film based on Truman Capote’s famous novella. Cat plays a significant role, at least in terms of symbolizing Holly’s free spirit and transformation throughout the movie. Keep watching for him, all the way to the unforgettable final scene.

In this mafia masterpiece’s famous opening scene, Don Corleone sits and strokes his grey tabby cat as he listens to requests for favors on his daughter’s wedding day. Fun fact: The cat was not actually scripted in the scene. The feline was running around the studio that day, and director Francis Ford Coppola randomly placed him in Marlon Brando’s lap before shooting.

We love Ripley’s orange tabby Jonesy so much, we’ve already featured him in not one, but two blog posts! As the faithful spaceship companion and lucky survivor of a horrifying alien attack, of course he’s worth mentioning a third time. Fun fact: There was a German Shepherd on set to get Jonesy to hiss in certain scenes.

Molly and Sam (played by Demi Moore and Patrick Swayze, respectively) are madly in love—then Sam is murdered. As Sam’s ghost lingers, trying to figure out why he was killed, Molly and her tabby cat Floyd continue on in somber existence. Floyd can see Sam’s ghost, eventually even aiding him by (inadvertently) chasing off one of the killers!

One could argue that the cat belonging to Buffalo Bill’s first victim gives detective Clarice Starling a big clue in this classic psychological thriller. The cat’s meowing draws Clarice toward the victim’s closet, setting off a chain of events that would eventually lead to catching the serial murderer. Hannibal Lecter, who needs ya?

You’re probably asking: Men in Black won an Oscar? Indeed, it did… for Best Makeup, anyway. We’ll take it as a chance to brag about orange tabby Orion, who literally holds the key to the galaxy around his neck. Orion is so devoted to his murdered owner that he follows him all the way to the morgue. Makes you wonder if your cat would be so loyal…

In one of the few Oscar-winning movies on our list that could be considered light-hearted, Shakespeare observes a young boy actor on the streets enticing a black cat over with live mice. The boy remarks that he prefers plays which are violent—and not moments later, we hear the cat screech in outrage. Perhaps Shakespeare took this to heart?

A black cat also cameos in a small but notable role in this sci-fi game-changer of a film. While on a mission, Neo (Keanu Reeves) happens to see the black cat walk by a doorway. A second later, he sees the same black cat walk by the same doorway. Talk about déjà vu—or, in this case, a tipoff that there has been a glitch in the Matrix.

The first film in Peter Jackson’s epic fantasy trilogy contains an early scene where the hobbits have just arrived at the Prancing Pony, clearly distressed after being chased by Ringwraiths. Sadly, they’re not greeted with much comfort: Not only is Gandalf the wizard missing, but a long-haired black cat unhelpfully judges them from the inn’s table.

As the first of the animated Oscar-winning movies on our list, The Incredibles sets the stage for cat lovers early on. Mr. Incredible is on his way to a robbery when a little old lady begs him to rescue her orange tabby stuck in a tree. The superhero drops everything to shake the cat free (begrudgingly, on the cat’s part), who lands safely in her little old lady’s arms.

This crime thriller from the Coen brothers features a few minor cat scenes. Two involve a particularly milk-thirsty orange tabby that seems to live in a hotel. Another involves Sheriff Ed Tom Bell (Tommy Lee Jones) visiting his uncle, whose home is overrun with cats. The old man describes the cats as “either half-wild or outlaws.”

Avoid this film if you only like your cats to have happy endings. As with Stieg Larsson’s hit novel, the story includes a stray feline that makes himself at home with journalist Mikael (Daniel Craig) while the latter investigates an old missing person’s case. Unfortunately, the cat becomes a victim of the killer Mikael seeks.

This animated film about a young scientist, his inflatable robot, and other friends also features Mochi, a Japanese bobtail cat. Mochi can be seen throughout the movie, from following around his stress-eating owner and being blamed for the noise of the others’ antics, to contentedly residing in the arms of the big inflatable robot.

Wes Anderson’s comedy-drama about a hotel concierge and his lobby boy includes an ill-fated silver Persian cat. The cat finds himself in the company of many impressive figures, played by the likes of Ralph Fiennes, Jeff Goldblum, Adrien Brody, and Willem Dafoe. Sadly, the kitty ends up sailing out a hotel window to his doom.

Many a villain requires a feline sidekick. Case in point, the return of Bond villain Ernst Stavro Blofeld (played by Christoph Waltz) and his white Angora cat. This time around, the cat is actually quite cuddly with Bond, despite the 007 agent being strapped to a chair and about to be tortured. Perhaps it was the cat’s way of offering a bit of comfort?

All around, one of our favorite animated Oscar-winning movies is Inside Out. And, one of our favorite scenes is the end credits where we see the emotions revealed inside a grey tabby cat’s mind. The five “inside” kitties embodying joy, sadness, fear, anger, and disgust hilariously mill around, occasionally coughing up hairballs and making the cat’s circuits go haywire.

This delightful, colorful animated movie tells the story of a boy named Coco visiting his relatives in the land of the dead. Coco’s grandmother’s spirit animal Pepita is a majestic winged tiger in the land of the dead—but when she crosses over to the world of the living, she is a petite grey tabby. It’s just as we figured: Within every kitty lives a mighty jungle cat!

The biopic of Winston Churchill as Prime Minister in the midst of World War Two includes many truthful facets of Churchill’s life—including the fact that he was a devoted cat lover. Throughout his life, he owned several orange tabbies. In the film, we in fact see an orange tabby in Churchill’s bedroom with him.

Finally, the 2018 Best Picture winner from Guillermo del Toro depicts the relationship between a janitor named Elisa and an amphibious creature at a top secret research facility in the 1960s. Elisa’s neighbor Giles (Richard Jenkins) owns many cats… one of which unfortunately falls victim to the Amphibian Man’s appetite.

We hope you’ll enjoy binging these Oscar-winning movies featuring cats as much as we plan to! 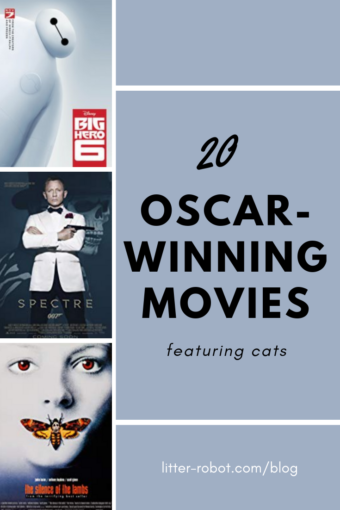