Got a thing for grey cats? So do we—after all, they’re soft, sleek, and stunning. In the feline world, “grey” and “blue” are often interchangeable. You’ll find grey/blue coloration within almost any breed, but today we’re highlighting some of the best-known grey cat breeds! 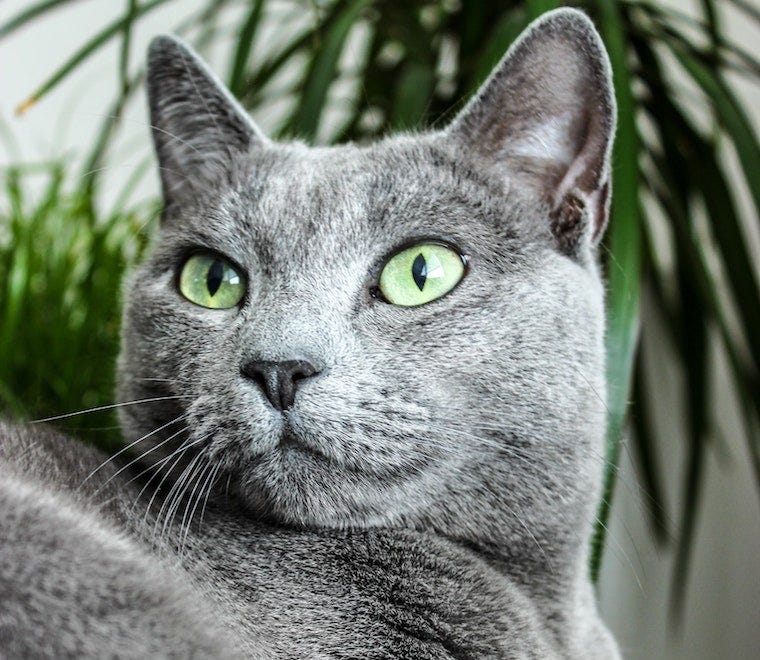 The Russian Blue cat is long, slender, and muscular. They sport a blue-grey double coat that is plush and silky to the touch, making them appear somewhat larger than they are. As kittens, their eyes are yellow; with age, they become a vivid green.

This cat is playful yet reserved—they will often take to one person and resist strangers and new environments. They’re very nitpicky about hygiene and having a clean litter box. In fact, they may not even enter the litter box if it is dirty. (This is where a self-cleaning litter box comes in handy!) The Russian Blue is known for their love of food and may face obesity if allowed to eat as much as they want.

The Russian Blue is believed to have originated in Russia; indeed, the breed’s warm, thick coat suggests that they were long accustomed to surviving in a cold climate. According to some legends, the Russian Blue was at one time the target of hunters, who likened their luxuriant fur to the fur of seals. 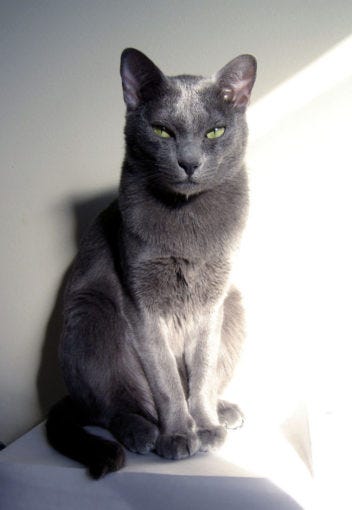 The Korat cat is one of the oldest and naturally purest breeds found today. They have blue-grey fur tipped in silver, which gives them a phosphorous-like glow. Their eyes start out blue, gradually changing to amber and finally bright green. They are small to medium in size, but also muscular.

The Korat is a social, attention-seeking cat. They love to cuddle, play, and bond with their family. They generally get along with other animals, but may become jealous if another pet receives too much attention. 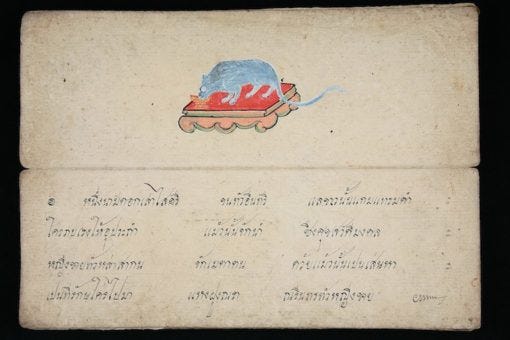 These cats originated in Thailand, making their first illustrated appearance in a tamra maew, a Thai book of cat poems, written between the 14th and 18th centuries. Since then, the Korat has held a cherished place in Thai culture as a prosperity, health, and good luck charm. They are a relatively rare find in American households. 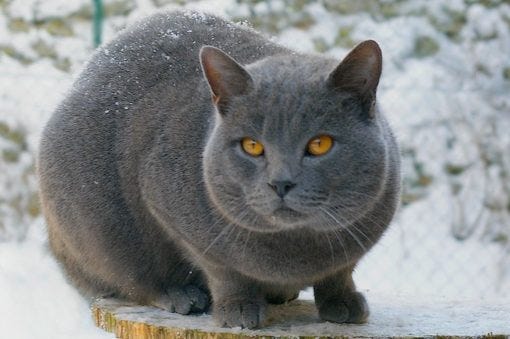 The Chartreux is often described as looking like a “potato on toothpicks” because of their robust body and thin legs. Their blue-grey coat is dense and water-repellant. They are well-muscled and energetic, living up to their reputation in French literature as fine mousers.

They are born hunters, but also good-tempered, loyal, and quiet. This cat is playful, fun-loving, and may enjoy a game of fetch. They’re even known to become familiar with their name and respond when called.

The Chartreux is said to have been bred by monks in the order’s head monastery, Grande Chartreuse, in the French Alps. These cats were supposedly trained to have quiet voices so as not to interrupt meditation (this hasn’t been verified, however). 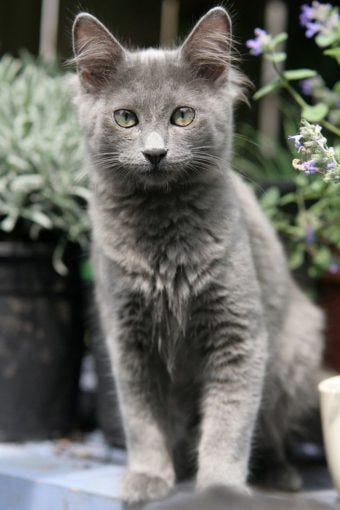 The Nebelung is often compared to the Russian Blue with their dense blue-grey coat and bright green eyes—however, the Nebelung’s fur is semi-long and accented by silver-tipped guard hairs. They are as graceful and muscular as their shorter-haired counterparts.

They are mild-tempered, soft-spoken cats that are also affectionate and playful. This cat is a devoted and loyal companion, but won’t interfere with every aspect of their family’s life. They are shy around strangers.

The Nebelung is an American cat breed, having originated when a black Domestic Shorthair mated with a Russian Blue. The breeder chose the name Nebelung, which means “creatures of the mist” in German, due to the breed’s unique appearance. 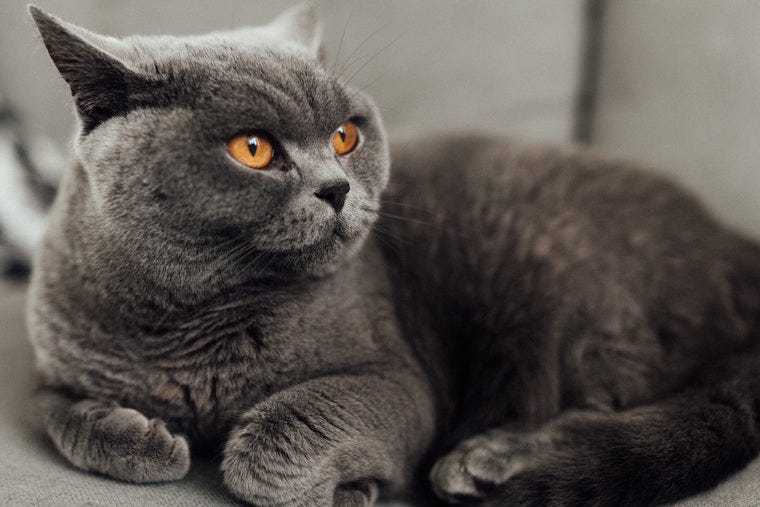 The British Shorthair, once called the British Blue, has a crisp, plush coat, dense and waterproof, over a compact, cobby body. They are medium to large in size, with a massive, round head atop a short, thick neck. They are sometimes known as the bulldog of the feline world. The British Shorthair is best known for being blue-grey in color, but may be bred in other shades.

Although quiet and initially hesitant, this cat will warm to people once they become familiar with them and will bond closely with human family members. They are particularly good with children, showing patience, affection, and easy adaptation to changes in the home.

The British Shorthair is considered the first official showcat. Until the late 19th century, they were a mere average domestic cat, commonly called a moggy in Britain. Over time, the Shorthair came to be regarded as more than just a working cat, and, per PetMD, began to be welcomed into the home to “share the warmth of the hearth with the family proper.” 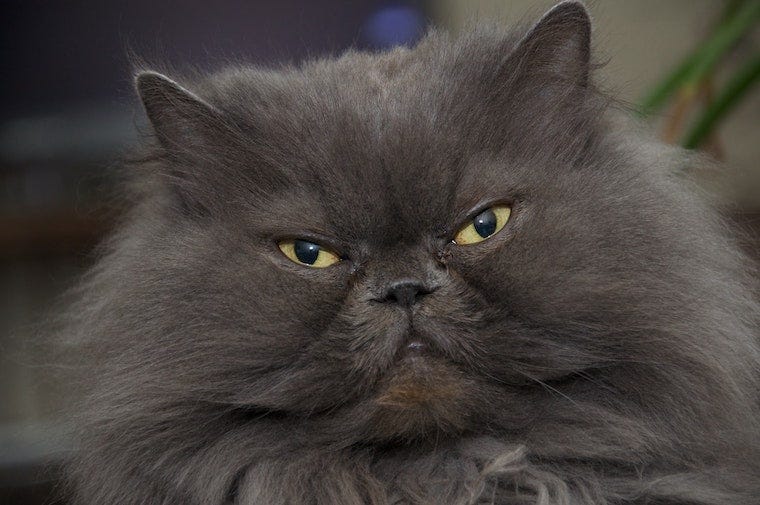 While Persian cats are typically famous for their silky white coats, they do come in a variety of other colors—including the Blue Persian, a perfectly handsome grey kitty. This very old breed is thought to have originated from Turkish Angora cats crossed with other long-haired cats from Persia, Afghanistan, Burma, China, and Russia. The Persian won over an Italian nobleman in the 1600s. He brought them to Europe where they went on to become Queen Victoria’s favorite.

Persians have been called “furniture with fur” because of their long periods of inactivity. These cats have a sweet, gentle nature and prefer a calm atmosphere. While they are happy to be groomed and petted, they aren’t generally interested in playing games or chasing toys. However, as with any pet, it’s important to try to engage your Persian in some playtime exercise every day. 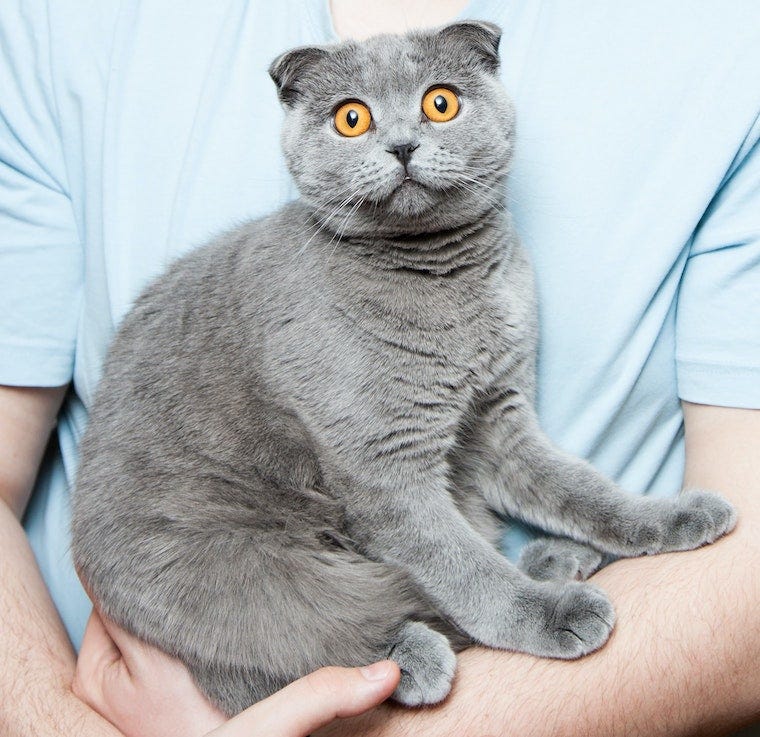 Scottish Folds have plush, dense fur that can be either short or long—and often grey. These sweet, chill cats have a sturdy body covered with padding. Scottish Folds are one of the most popular breeds in America and Europe. They are typically happy with a sweet disposition. The Scottish Fold is known for sitting up like a human, affectionately coined “the Buddha sit.”

Every Scottish Fold cat alive today can trace his or her ancestry back to a barn cat named Susie. In Scotland in 1961, a shepherd named William Ross found Susie, a longhaired white female with distinct folded ears. Susie was bred with various other breeds like Persians, American Shorthairs, and Exotic Shorthairs to achieve the sweet, round look of Scottish Folds today.

Fun fact: All Scottish Fold kittens are born with straight ears; 18 to 24 days after birth, their ears will fold in about 50% of the litter. 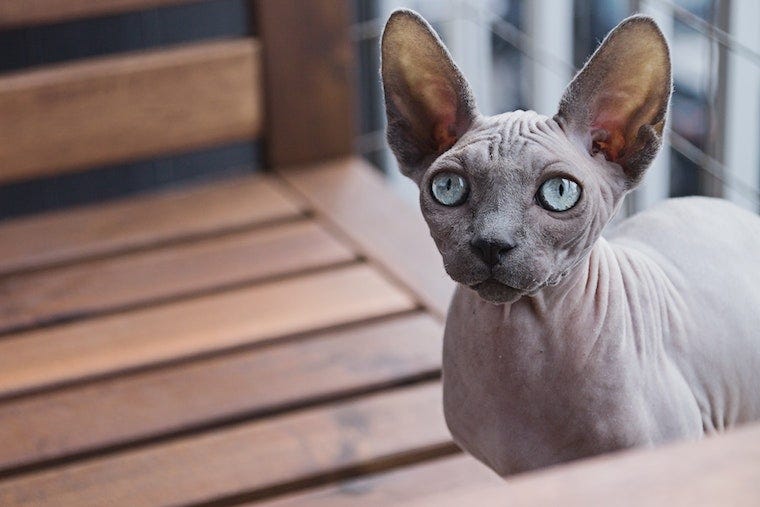 The popular Sphynx cat is typically hairless, but may have a fine down on their body. Many Sphynx will have grey skin or grey down, and still require regular bathing. If hairless cats like the Sphynx are not wiped down or sponge-bathed weekly, they may feel sticky to the touch and develop skin problems.

How did this breed get its name? In 1966 Ontario, Canada, a black and white cat gave birth to a wrinkled hairless kitten. The owner named this kitten Prune, which was eventually bred to other cats in an attempt to create more hairless kittens. Hairlessness is a recessive gene, so some of the kittens were born with hair and some were not. The first kittens were called Canadian Hairless Cats. People began referring to them as Sphynx cats due to their resemblance to the ancient Egyptian cat sculpture, the Sphinx. And despite their stoic appearance, the Sphynx cat is known for her highly social, attention-loving, and inquisitive personality. 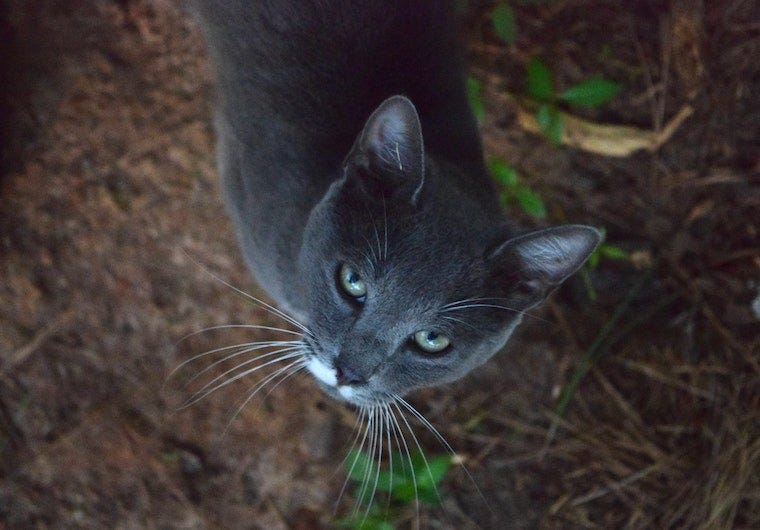 Domestic Shorthair cats—also known as moggy cats, mutts, or mixed breed cats—refer to any shorthair non-pedigreed cat. Domestic Shorthairs are the most common cat in the United States, accounting for around 90–95% of their number. They come in any size, shape, coat pattern, or color—including grey!

For instance, a Domestic Shorthair can be solid grey, a grey tabby (striped, spotted, and swirled), a grey colorpoint, or a grey tuxedo (bi-color).

Grey commonly arises in a plethora of other cat breeds, including the following: 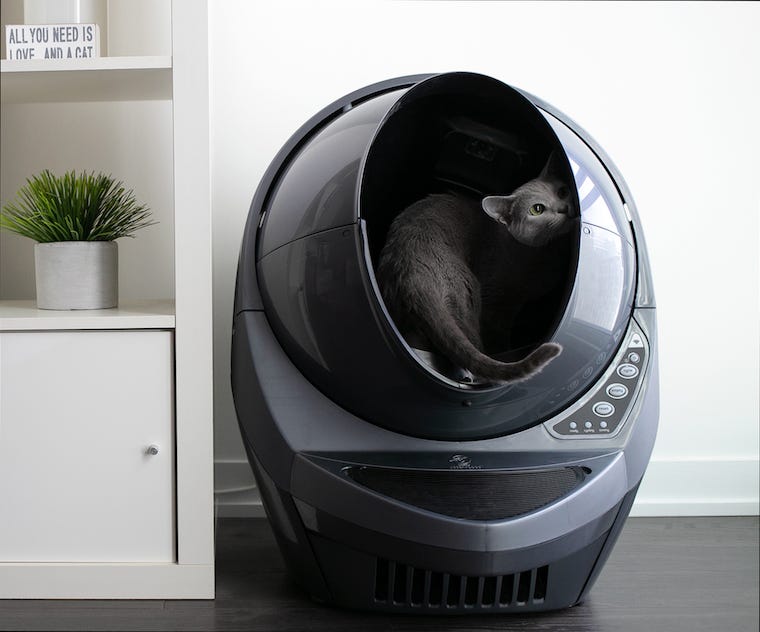 The only thing cooler than adopting a kitty belonging to one of these grey cat breeds? Watching that kitty use the self-cleaning Litter-Robot—available in Grey, naturally! The art of camouflage has never looked so clean.

Whether or not you have a preference among the grey cat breeds, we can all appreciate the beauty and unique spirit they bring to the feline world.