Are Lilies Poisonous to Cats? Absolutely

Each year around the Easter holidays, lilies find their way into numerous American households. Unbeknownst to many pet parents, most species of the lily pose an extreme threat to a certain four-legged friend in the home. Are lilies poisonous to cats? Absolutely.

Why are lilies poisonous to cats?

As Litter-Robot resident veterinarian Dr. Justine Lee points out in her post about the top 10 poisons that land cats in the emergency vet, cats are at a higher risk of poisoning because they have an altered liver metabolism.

Ingesting as little as two petals or leaves can result in severe, potentially irreversible acute kidney failure in your cat.

Depending on the genus, the toxic principles of lilies include insoluble calcium oxalates; lycorine and other alkaloids; cardenolides (convallarin and others); saponins, and more.

Which lilies ARE and are NOT poisonous to cats?

When a cat ingests part of a lily, the severity of poisoning varies greatly from genus (sub-family) to genus. Lily plants that are the most toxic to cats belong to the Lilium genus (which includes Easter lilies, tiger lilies, and Asiatic lilies) and the Hemerocallis genus (which includes daylilies). Part of what makes these plants such a problem is that they’re commonly found in florist bouquets—as they tend to be fragrant, inexpensive, and long-lasting.

There are other species of lily that are poisonous to cats, as well. In general, avoid bringing the following plants into the house:

Unfortunately, symptoms may not manifest in a cat for 1 or 2 days—at which point it may be too late to successfully treat. If you have a lily plant in the house and notice any of the following symptoms in your cat, seek treatment immediately:

What to do if your cat has been poisoned

Even with aggressive medical treatment, cats may die within 2 to 3 days of lily ingestion. If you think your cat was poisoned, call your veterinarian, emergency animal clinic, or the ASPCA Animal Poison Control Center (888-426-4435) immediately for life-saving advice.

Don’t forget: You can’t induce vomiting in cats at home safely, so an emergency vet visit is a must!

The emergency vet will take blood and urine tests to evaluate kidney function. If the cat only recently ingested the plant, the vet may induce vomiting through activated charcoal given orally. In order to prevent dehydration and the kidneys shutting down, the cat will be given fluids intravenously for 1 to 2 days. The vet will monitor kidney function and urine output. If no urine is produced, it may be a sign that treatment was unsuccessful.

Are lilies poisonous to other animals?

Other household plants to beware of

Lilies may be the most common culprit behind feline poisonings, but other household plants can also pose a threat to cats. These include:

Visit ASPCA’s list of plants that are toxic and non-toxic to cats to learn more. 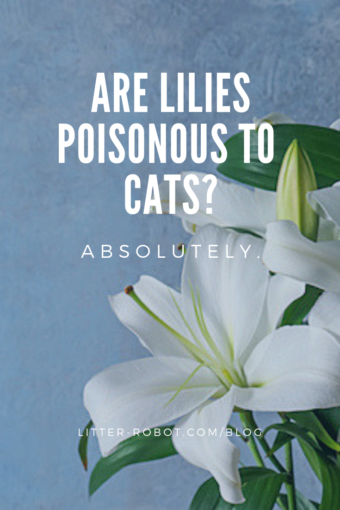