Video: Top 10 Poisons That Land Cats in the Emergency Vet

Did you know that March 17-23, 2019 is National Poison Prevention Week? It’s a week dedicated to making both two-legged and four-legged safe from dangerous chemicals and poisons that are commonly found in our households. As a veterinary emergency critical care specialist, I want to help spread the word to help prevent any pet poisonings. That’s because I see a poisoning case come into the emergency vet... Every. Single. Day. Not only is it dangerous to your cat, but it can be costly for you too!

Now, don’t get me wrong. Most cat parents are meticulous about cat-proofing the house. But even the most well-intentioned cat owner may accidentally drop a pill or bring a flower bouquet into the home, as they don’t always know what the top dangers are to cats.

What the ASPCA says

The ASPCA Animal Poison Control Center (APCC), the only non-profit poison control center in the world, released their top 10 poisons affecting dogs and cats. While 90% of their calls involve dogs (as cats often have discriminating palates!), 10% comprise cats. Thanks to a cat’s curious nature, they are often more likely to investigate new items and get themselves into trouble. (You know the saying: Curiosity killed the cat, but satisfaction brought him back!)

Thankfully, cats are typically fastidious eaters—in other words, they don’t gorge and eat massive amounts of things the way dogs do. (After all, dogs do eat their own poop, unlike dignified cats!) So we rarely see food or chocolate poisoning in cats. What’s important to note is that because cats have an altered liver metabolism, they are at higher risk of poisoning as compared to dogs. While something may be “non-toxic” to a dog, it often can be very poisonous or deadly to a cat. There are also unique species differences—many lilies are not poisonous to dogs, but can be deadly to our feline family members.

So, what toxins do we have to be careful of around our cats? The top 10 poisons bringing cats to the emergency vet that I see include:

While cats are naturally carnivores, they seem to enjoy munching on greenery. If you own a cat, however, that means keeping houseplants out of reach. More importantly, it means keeping bouquets out of the house. Why? Because some cut flowers or plants can be deadly to cats. Of all plants, lilies—specifically ones like Tiger, Day, Asiatic, Easter, and Japanese Show (Lilium and Hemerocallis spp.)—are extremely toxic. These are commonly found in florist bouquets, as the flowers are fragrant, inexpensive, and long-lasting. Very small ingestions of two or three petals or leaves—or even pollen licked off a cat’s coat—can result in severe, potentially irreversible acute kidney failure. Note that not all lilies are equally poisonous or dangerous. To be safe, check with the ASPCA before bringing any plants home. Another safer option: Grow some catnip or wheatgrass for them instead.

While most household cleaners (e.g., surface cleaners) are safe, some are much more dangerous to cats, including laundry detergent, drain cleaners, concentrated toilet bowl cleaners, rust removers, and lime-away products. If accidentally licked or ingested by a cat, it can cause severe profuse drooling, chemical burns to the mouth and esophagus, difficulty breathing, and vomiting. When in doubt, make sure to wipe up any excess liquid or residue, and keep your cat out of the room while you are cleaning! Also consider the hazards of garden products: If you let your cat go outside, he or she may be exposed to fertilizers or other chemicals that can cause vomiting, diarrhea, or even more severe neurologic signs. To be safe, keep your cat indoors or these gardening products out of reach.

These are common flea and tick medications that you can find at your veterinary clinic or at the local pet store (e.g., Hartz™, Sergeants™). These typically contain high concentrations of a chemical derived from the Chrysanthemum flower. While very safe in dogs, pyrethrins or pyrethroids are highly toxic to cats. Accidental poisoning in cats typically occurs when pet owners apply dog insecticides to their cats, or when cats lick the medications off dogs. Lesson to learn? Always read the fine print, and never apply a “small dog” flea and tick medication to a “big cat” without consulting your veterinarian first! If cats are exposed to concentrated insecticides, it can result in severe tremors, seizures, hyperthermia, and death when untreated. If you do accidentally apply it onto your cat, you’ll want to bathe it off with a liquid dish soap (used for washing dishes in the sink, like Dawn™) and get to a veterinarian immediately.

Surprisingly, one of the top 5 feline toxins is a human antidepressant medication called Effexor™. Other common antidepressants include brands such as Prozac™, Zoloft™, and Cymbalta™—all which can be quite poisonous to cats. For some unusual reason, cats seem to be drawn to the smell or flavor of Effexor™, making it appealing to them. While most cats are difficult to pill, they electively eat this one on their own! Unfortunately, antidepressants can be quite dangerous when ingested, and result in signs of lethargy, vomiting, tremors, seizures, hyperthermia, and diarrhea. When in doubt, keep all human medications out of reach of your cat.

When in doubt, never give a pain medication to your cat without consulting a veterinarian or the ASPCA. Common, over-the-counter, non-steroidal anti-inflammatories (NSAIDS) include drugs such as aspirin, naproxen, and ibuprofen; while we use this commonly in humans, even ½ a pill can be potentially fatal to a cat. If ingested, NSAIDS can result in stomach ulcers and severe acute kidney failure. Acetaminophen, commonly known as Tylenol, is also dangerous to your cat. One Tylenol can kill a cat as a result of severe poisoning, because cats can’t metabolize it; they end up having difficulty breathing, blue gums, a racing heart rate, anemia, and rarely liver failure. Thankfully, your emergency vet will have an antidote for acetaminophen poisoning.

As an emergency critical care veterinary specialist, I don’t believe in using mouse and rat poison in any household containing pets. There are several types with different active ingredients in them. Common ones contain bromethalin or cholecalciferol. Bromethalin has a very narrow margin of safety and can result in tremors, walking drunk, and seizures. Cholecalciferol causes elevated calcium levels and can result in secondary acute kidney failure. When in doubt, keep these poisons out of reach and consider using more humane traps instead.

If your cat bites into the plastic of a glow stick or glow jewelry, a poisonous bitter chemical leaks out. You typically don’t need to go to the vet for this one, but can treat it on your own. If ingested, your cat will foam and froth at the mouth, so it’s important to flush that bitter chemical out of his mouth. Offer him milk or canned tuna water. Then turn off the lights and make sure your cat isn’t glowing. If your cat is glowing, bathe it off with a liquid dish soap like Dawn; otherwise, if it’s on your cat’s fur, your cat is going to groom it off and become poisoned again.

As a veterinarian, I may prescribe certain medications for your dog or cat that are safe at the correct dosage. However, if your cat gets into a larger amount or the whole container, it can be dangerous. Keep veterinary medications out of reach just as you would human medications.

When it comes to an accidental pet poisoning, it’s always safer and less expensive when you seek treatment immediately. If you think your cat was poisoned, call your veterinarian or The ASPCA Animal Poison Control Center (888-426-4435) immediately for life-saving advice. Keep in mind that you can’t induce vomiting in cats at home safely, so most of the time, an emergency vet visit is a must!

Better yet, now that you’ve seen the most common accidental poisons for cats, go cat-proof to keep our four-legged feline friends safe! 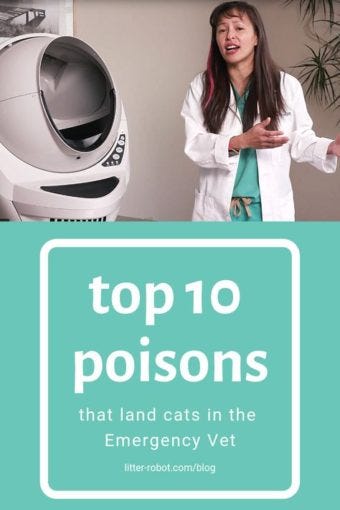