When you combine striking green eyes, a luscious blue coat, and a loving yet shy personality, you get the Russian Blue cat. These elegant felines are great family-friendly cats that will wow strangers with their unique look. You might look at these cool cats and wonder if they are judging you. (And you might be right!)

The Russian Blue cat is playful, loving, and loyal. They want to be with their family but are happy to spend time alone. These cats do enjoy their independence, but they can be affectionate and energetic when they feel comfortable. They’re sometimes described as “dog-like” because of their playful energy and ability to tolerate other animals and children.

The Russian Blue is a great pet to care for if you are looking to adopt your first cat. They are typically low-maintenance and adapt easily to changing environments, making them ideal for people who live in apartments.

Overview of a Russian Blue cat 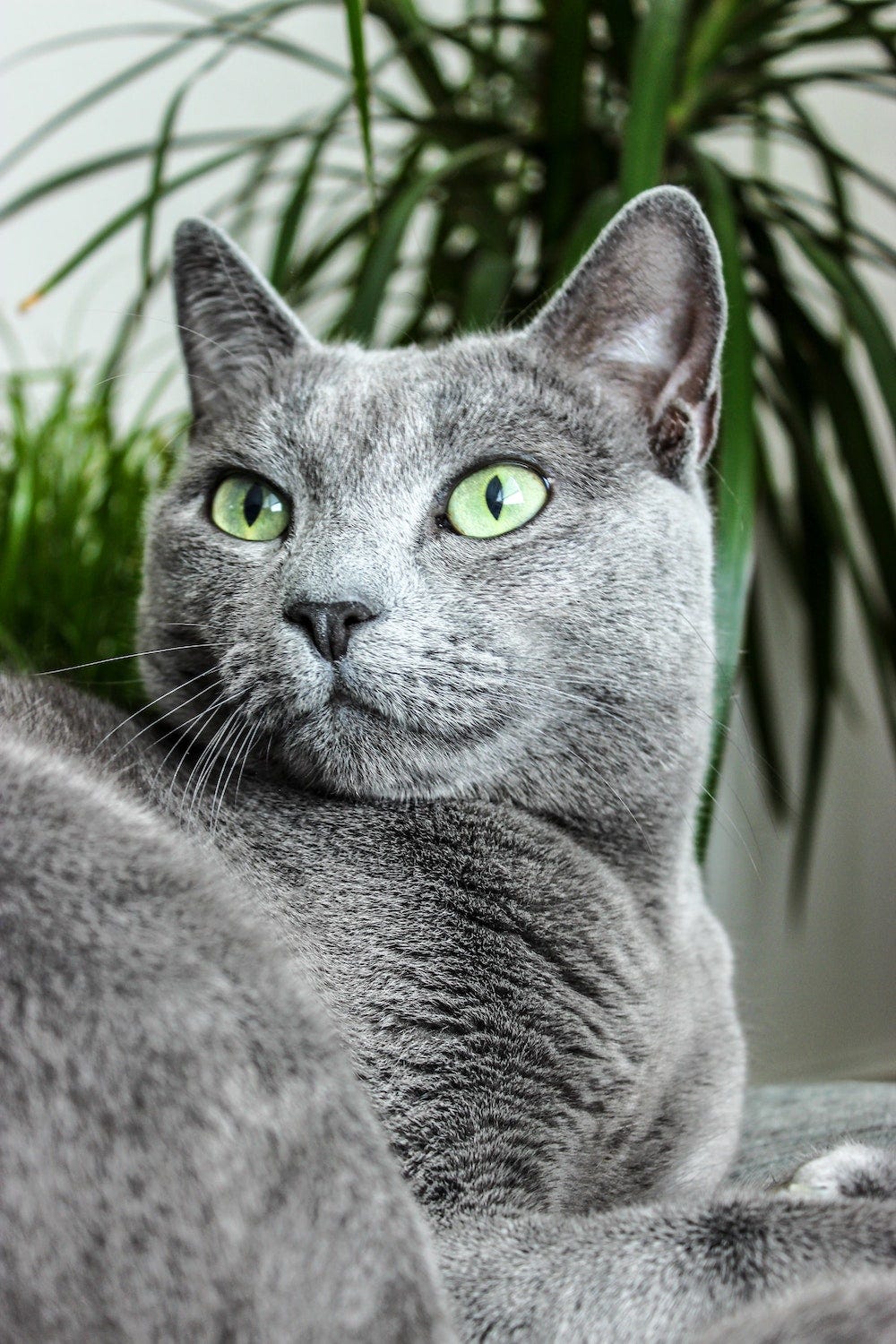 The Russian Blue is a small- to medium-sized cat that is extremely recognizable. They have a shimmery blue-grey coat with stunning green eyes. They are both independent and loving, giving them a dynamic that’s perfect for first-time pet parents.

Russian Blues typically weigh between 6 and 12 pounds, with females averaging slightly smaller than males. They are fine-boned with a slim frame that is graceful and flexible. They move quickly and quietly.

Russian Blue cats are long and slender felines. From nose to tail tip, they can be up to 24 inches long (yes, 2 whole feet) and 10 inches tall. This gives them a very slinky appearance, and if you catch them moving out of the corner of your eye, you might think you’re seeing shadows in motion.

Their short, plush double coat is arguably one of the most defining features of the Russian Blue.

The coat is blue (grey) with silver-tipped guard hair that causes a shimmery appearance. These coats were made to withstand harsh winters and difficult weather, so they can adapt to many environments.

Vivid green eyes are the other distinctive feature of the Russian Blue. Kittens are born with bright blue eyes; over the first few months of life, their eye color changes from blue to golden yellow, and finishes off as green. While these colors are relatively short-lived, it’s entrancing to watch the change unfold.

Russian Blues were able to withstand centuries of harsh winters in Northern Russia. Now that they’ve found their way to safe, warm homes, they are here to stay. And for many years with you, they will!

A healthy and well-cared-for Russian Blue cat can live for 15 years or more. With good exercise, proper nutrition, and lots of affection (and annual vet visits), your Russian Blue can be around for the long haul.

History of the Russian Blue cat 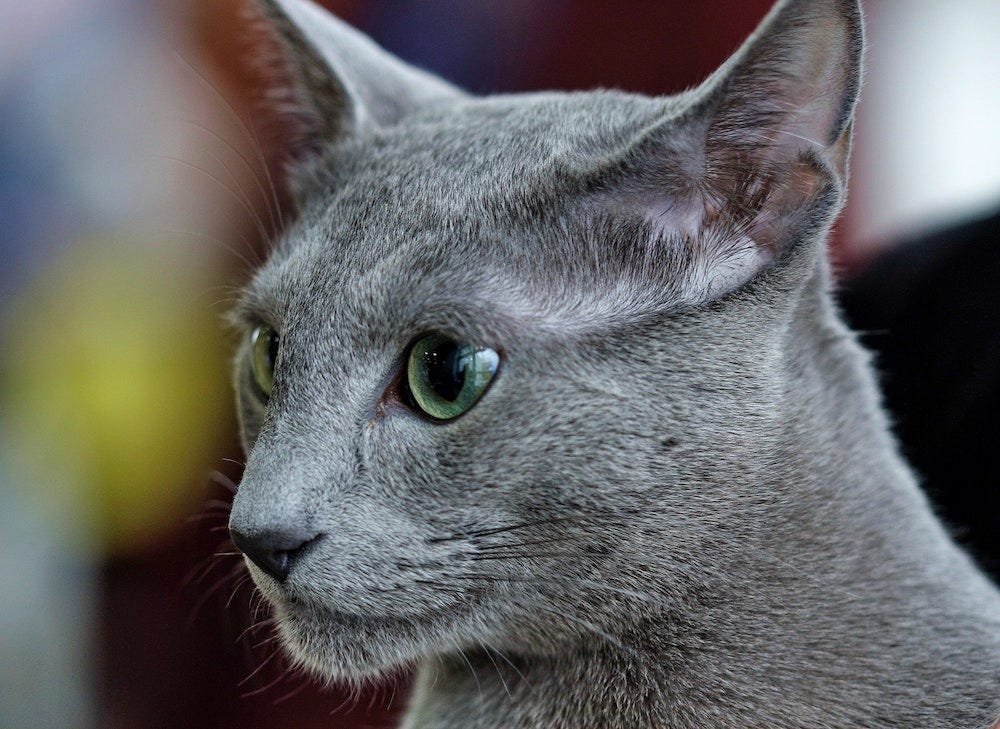 No one is exactly sure where the Russian Blue cat originated, but there are some theories floating about. The most prominent one is that they sailed to Great Britain on ships with the British from the Russian White Sea port town of Archangel Isles, or Arkhangelsk, in the 1800s.

There are many accounts that claim blue shorthair cats are a naturally occurring breed and not a product of breeder intervention in Russia. This theory is widely accepted because their dense, plush coats do well in harsh Russian weather.

Originally, the Russian Blue was presented as the Archangel cat at the Crystal Palace cat show in London, England. In the 1880s, the Russian Blue competed as a shorthair cat, even though there were distinct differences in other shorthair cat coats. They rarely won in their first cat shows, as round and plump cats were all the rage at the time. Still, they persevered.

Like other cats, the Russian Blue almost met their fate during World War II. It wasn’t until they came to the United States in the early 1900s that breeders began to uphold and promote the breed. Now, they are well-loved by many families and are recognized in all North American cat associations.

The Russian Blue is tall, long, and slender. They have a long tail that is similar in length to their body. Their legs are also long but rather thin, with small paws. This helps make them nimble and quick during playtime.

They are often mistaken for the Korat, the Chartreux, and the British Shorthair, but make no mistake—they are very much their own breed.

They have bright, wide-set eyes, with slightly pointed ears set far apart on their head. The Russian Blue is attentive and careful. They will likely be alert to what you are doing at any given point of the day.

While no cats are truly hypoallergenic, Russian Blues are considered one of the less allergenic cat breeds available. If you are allergic to cats, but aren’t bothered by minimal allergy symptoms or are willing to take allergy medicine more often than not—the Russian Blue should be on your list. 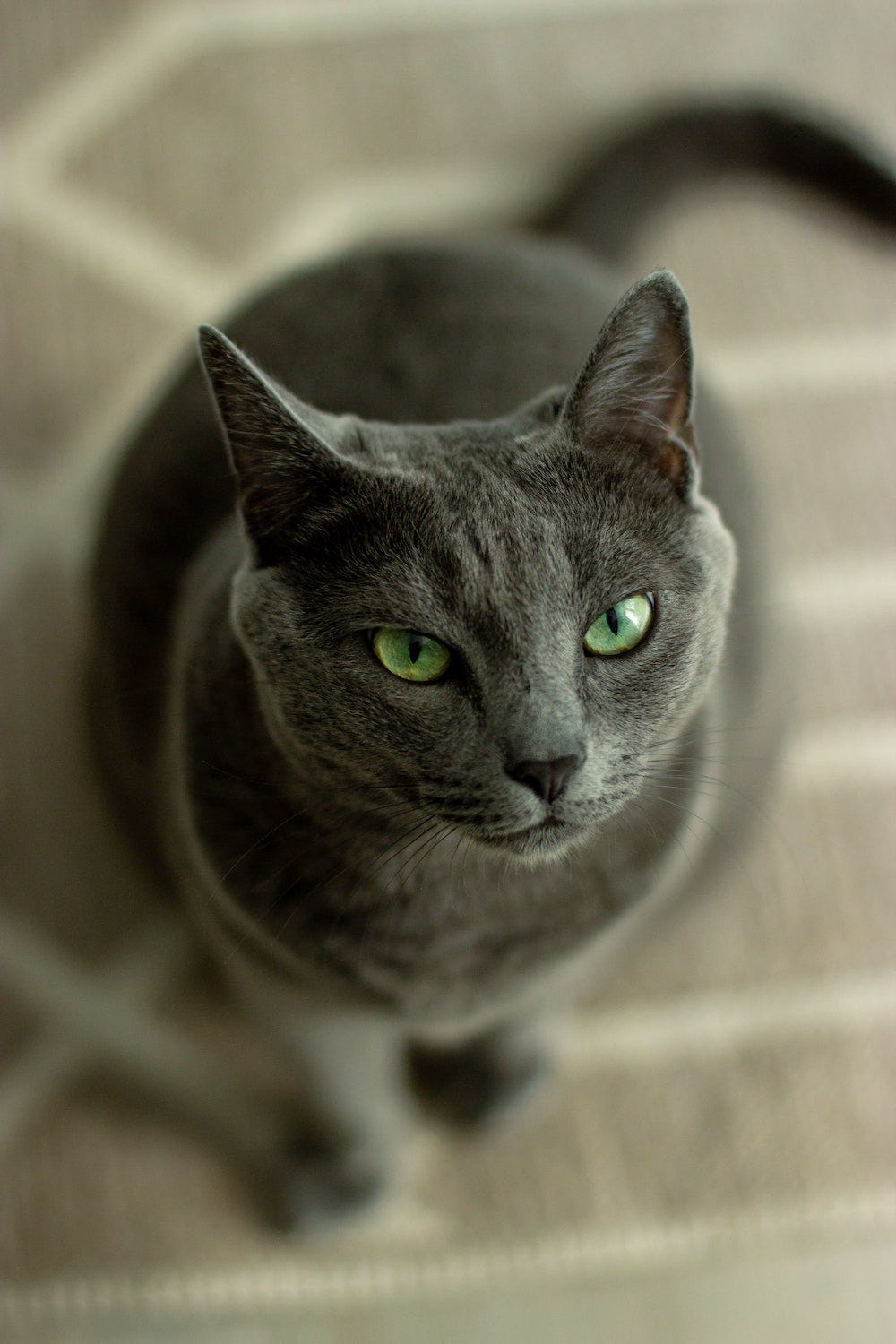 If you’re looking for a gentle and playful cat that doesn’t mind being cuddled but values their independence, this is the kitty for you. The Russian Blue is loyal to their family but somewhat shy around strangers.

Russian Blues might not be the first cat to jump onto a random visitor’s lap, but that doesn’t mean they won’t be happy to cuddle up next to their trusted humans. If you’re home, they may follow you around. If you leave, they will find ways to entertain themselves. Luckily, these cats don’t get overly lonely when their humans are gone.

Your Russian Blue will want to play, especially if you’re involved in the playing. They could chase a toy around for hours if their human was the one pulling the string!

Taking care of your Russian Blue should be no problem, even if you are a first-time cat parent. They are very dependent on keeping to a familiar schedule and dislike changes in the daily routine. They will let you know when it’s time to nap and if you’re late to their mealtimes.

Having plenty of toys and stimulating games can keep your highly intelligent Russian Blue occupied. 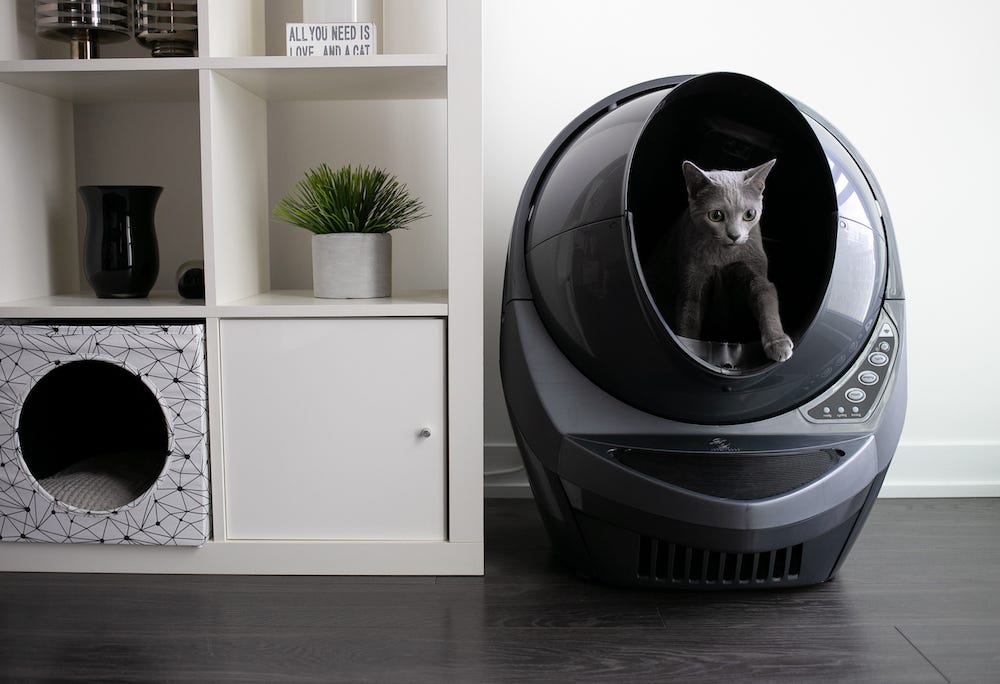 Russian Blues also require a top-notch litter box, and if it’s not up to their standards, they won’t use it. If this is the case with your Russian Blue and you aren’t able to clean the litter box after every use, consider using Litter-Robot. This automatic, self-cleaning litter box provides your Russian Blue a clean bed of litter every time, which means they can use the bathroom without leaving dirty tracks throughout your house.

Grooming your Russian Blue will be a low-maintenance task. They have short, dense coats that only need weekly grooming to collect loose fur. They will need their nails trimmed regularly, as well.

With a lifespan of 15+ years, you can assume your Russian Blue will be a happy and healthy individual. There aren’t any known genetically linked disorders for the Russian Blue.

However, they can develop progressive retinal atrophy (PRA), which deteriorates photoreceptor cells and can lead to blindness. They are also prone to UTIs and bladder stones. Be sure to take your Russian Blue to the vet at least annually for check-ups.

Additionally, you should watch your Russian Blue’s weight because obesity can be an issue. The Russian Blue is laid-back, so too many treats and prolonged inactivity can prove harmful. Healthy cat food and plenty of playing is a great way to support their health.

The Russian Blue is genuinely an ideal cat to call a family member, whether you are new to cats or have loved them for years and years. They provide their families with unconditional love, loyalty, and memories. They will become your best friend and want to spend unlimited time with you and your loved ones.

If you can provide ample playtime, proper nutrition, a clean litter box, plenty of toys, and lots and lots of love, a Russian Blue will be happy in your home. They are a great kitty with a lot to offer to those who earn their respect. 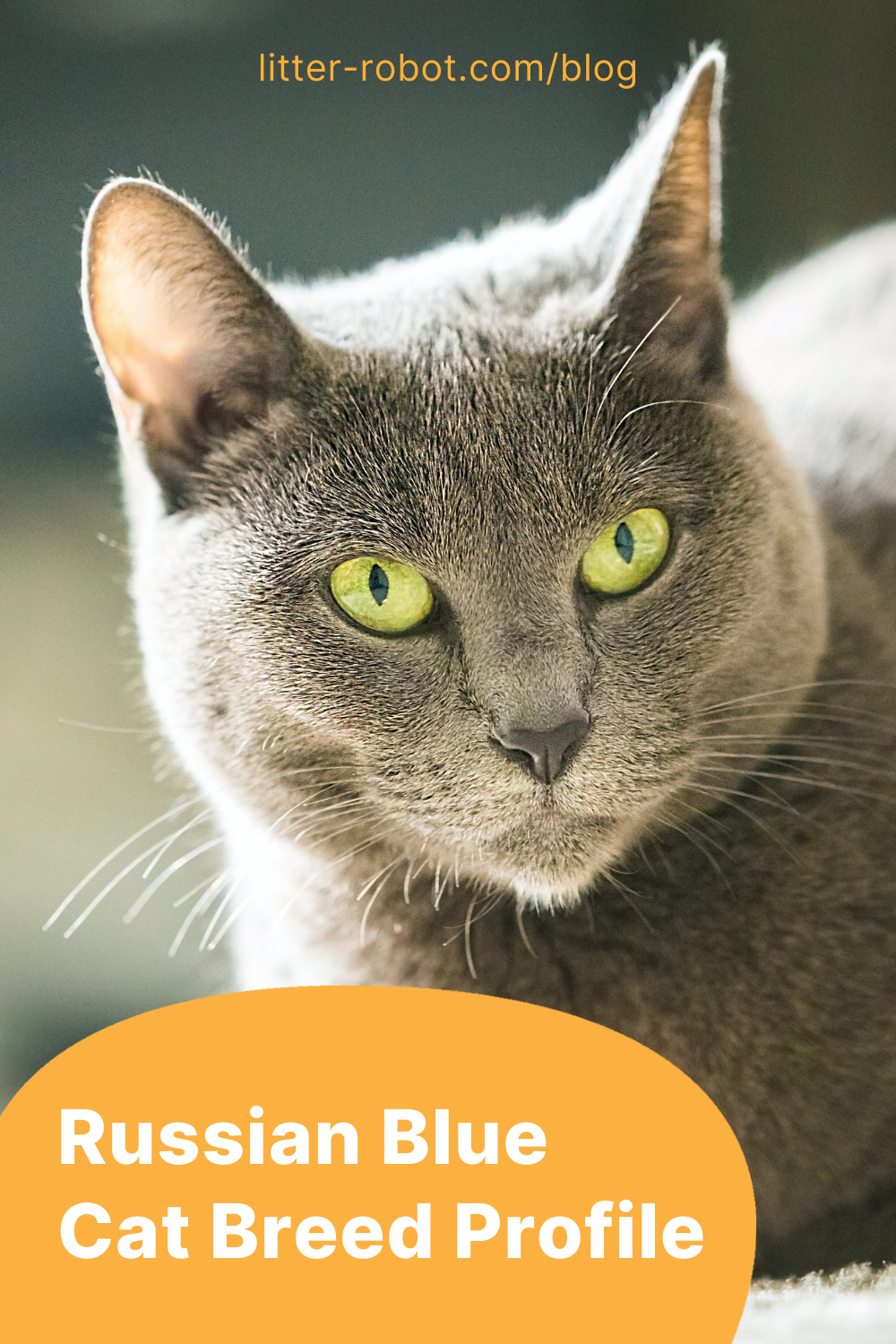