You won’t let a little thing like a timezone deter you from the rarest and most joyous of occasions. This Saturday, you’re going to rise with your cat at 3 a.m. and watch the Royal Wedding! 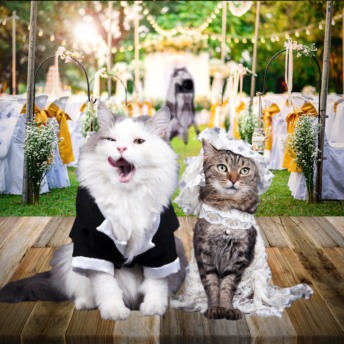 As one of the millions of heart-eyed viewers tuning in from around the world, you might also be mourning the recent loss of the Queen’s last royal corgi. Dogs, and corgis in particular as of late, have been a staple among the British Royal Family for centuries. In fact, the King Charles Spaniel breed was, you guessed it, popularized by King Charles II. Kings and queens, dukes and duchesses, and princes and princesses alike were often joined by their canine companions in official family portraits.

But where, pray tell, are all the royal cats?

Don’t despair, cat lovers. Our feline friends have gotten their share of the royal treatment, perhaps even more so than dogs when you consider their ancient history. These seemingly underrated purrinces and purrincesses have spanned epochs and cultures. Journey back 5,000 years and see for yourself!

Cats in ancient Egypt were a step beyond royal—they were straight up deities! (No wonder our kitties today act so entitled.) As far back as 3200 BC, an entire Egyptian city was founded just to worship the feline deity Bastet. The goddess Mafdet was often depicted with the head of a lion, house-cat, or cheetah, and was therefore capable of defending against venomous animals such as snakes and scorpions.

Ta-Miu was cat to Crown Prince Thutmose, the eldest son of Pharaoh Amenhotep III and Queen Tiye. After her death, she was mummified and buried in a decorated sarcophagus. And Ta-Miu wasn’t the only one—about 80,000 feline burials were discovered in 1888 in a tomb in Middle Egypt. Cats were even buried with provisions like milk and mice in the form of a royal offering. How thoughtful!

Did you know that there used to be a Siamese kingdom? What is now part of Thailand, the Ayutthaya Kingdom (1351-1767 AD) was home to Siamese monks who wrote and illustrated a book about their love of the temple cats! Tamra Maew (which sounds suspiciously like “Meow” to us) was translated as The Cat-Book Poems. Since then, cats have been of royal interest in the land, with King Prajadhipok, the seventh monarch of the Siamese Chakri dynasty, even featuring a Siamese cat in his coronation festivities in 1926.

In 10th-century Japan, cats were so revered that only members of nobility could own them. Felines were kept in pagodas, often used to guard priceless manuscripts. Furthermore, the Chinese Song dynasty (960-1279 AD) also favored cats as pets.

The Motherland calls to cats! The great Winter Palace in St. Petersburg has employed cats as pest control since Empress Elisabeth Petrovna in 1745. But it was Catherine II the Great (r. 1762-1796) who elevated felines to their rightfully royal status in Russia. Her personal favorite was the regal Russian Blue cat, a breed she gave to ambassadors as gifts for other sovereigns (reportedly including the British Royal Family). The Russian Blues had the run of the upper palace, while the cats on pest duty below were promoted to guard status, complete with salaries and additional food rations!

The British Royal Family of late seems partial to canines, but that was not always the case. Queen Victoria (r. 1837-1901) allowed her children to have cats as pets, while Queen Alexandra (queen mother 1910-1925) was officially photographed with a pet kitten.

Beyond royal pets, cats have played an important role as “Chief Mouser” to the Cabinet Office, or the official resident cat of the Prime Minister of the UK, since the 1920s.

We don’t practice royalty in America (although some reality television stars seem to think otherwise), but we’d be remiss if we didn’t mention Abraham Lincoln’s cats. The 16th president fed his beloved Tabby with a gold fork at White House dinners, and claimed his other cat Dixie was smarter than his whole cabinet. First Lady Mary Todd reportedly said cats were her husband's only hobby.

The other notably cat-friendly president was Calvin Coolidge, who had at least four cats at the White House. On the night that his cat Tiger ran away from home, Coolidge sent his Secret Service agent to WCAP radio to broadcast an appeal for help to listeners—and it worked!

The history of royal cats is indeed far-reaching and colorful. Now you can impress your family, friends, and cats with these cool facts when you all tune in to the Royal Wedding!