Should you leave your cat home alone for the holidays?

The holidays are just around the corner. Maybe, like many cat parents, your holiday plans include some travel. If that's the case, it's important to make sure the feline members of your family don't get the short end of the feather wand.

Many people make the mistake of thinking that their kitties will be OK if left by themselves over the weekend, or sometimes even longer. Actually, this is not true! Not only are disruptions in their routine and being left alone upsetting to cats, the risk of something cat-astrophic happening while you are away is simply too big to ignore.

I hate to admit it, but I learned this the hard way. Many years ago (before my brain was fully formed), I left my cat alone for the weekend. I filled up the food and water bowls, set out a second litter box, and assumed that he would be fine. Then, when I came home, I realized that we had accidentally locked him in the bedroom when we left!!! He was without food or a litter box for two days, and the only water he had access to was from the toilet bowl (eew!).

I felt terrible and never did it again.

Even though cats put on an air of independence, it's really just an act! They need us, and it's not safe or fair to leave them home alone.

1. The Unexpected Can Happen

Burglars and fires and power outages, oh my! Things can—and do—happen, and they can dramatically affect your cat's safety. If your home were burglarized or caught fire, your cat could escape...or worse! And even though power outages are (usually) resolved fairly quickly, they can lead to other issues. Furnace malfunctions or other problems could make Kitty pretty miserable.

The reality is that if anything happened while you were gone, your kitty would be on his own to protect himself, and he simply doesn't have the skills to get himself out of every situation without human help.

2. You Could Be Delayed

Travel is unpredictable, especially in the winter. Flights are delayed or cancelled, and storms make driving dangerous. There is always a chance that you will not be able to return home exactly when you planned. If you've arranged for a pet sitter to take care of your cat, you'll be sure that his needs will be met, even if your trip takes a few days longer than you expected.

3. Your Cat Could Get Sick or Hurt

No matter how lazy he usually is, your cat is not going to just lay around and do nothing until you return. Even the sleepiest kitty is occasionally overcome by the urge to explore. You've probably cat-proofed your house, but there is still potential for mischief! Kitty could knock something over and injure himself or squeeze into a small space that he can't get out of...you get the picture. If he got himself into some kind of predicament and had to wait several days before you returned to rescue him, it could be too late.

There is also the danger of medical issues arising while no one is around to notice. Many health problems are much easier to deal with if they are caught and treated early. Daily interaction with your kitty (either with you or someone you trust to care for him) is vital to catch the early warning signs!

Even if nothing disastrous happened while you were away, being left alone for extended periods of time is still upsetting for your cat. Cats are creatures of habit, and changes in their routines can cause anxiety. After all, it's not like a cat can look at the calendar and remind himself that his family will be home in two days. All he knows is that he's all alone.

Even if your cat isn't a "lap cat," he will still notice your absence. A pet sitter will be able to provide companionship, interaction, and a routine that's as close as possible to what Kitty is used to when you're home. If he's used to being fed on a certain schedule and having his litter box freshened up at a certain time, he'll be much happier if those things don't change.

And speaking of the litter box...Getting a house sitter or pet sitter will be a little easier if you have a litter box that cleans itself! That stinky aspect of cat care won't be on their to-do list! For more tips on getting ready for a pet sitter, click here.

The holidays are a great time to enjoy friends and family, as long as you take steps to make sure your kitty is cared for too!

Guest post by Kristen Levine Pet Living, the place for stories, science & advice for living happier and healthier with pets. 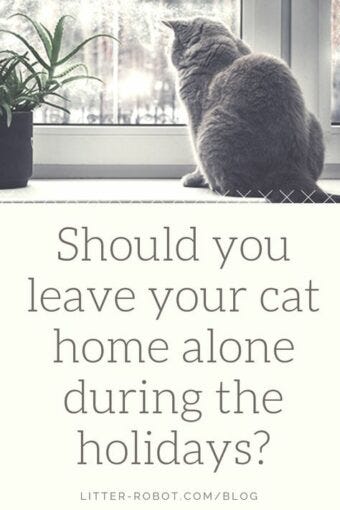 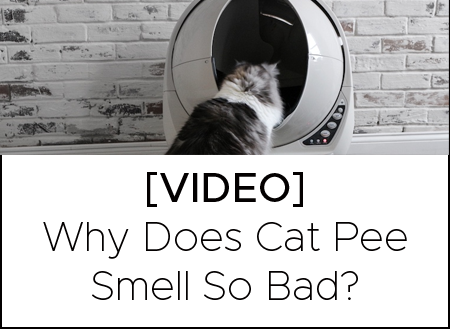