Why Do Cats Have a Third Eyelid?

It happened again: You saw your cat rouse from a deep slumber, gazing at you through eyes that appeared filmy, even translucent. He blinked a few times, and those milky layers retracted horizontally into the corners of his eyes. You breathed a sigh of relief (because it was weird, and you were glad it was over). What, exactly, was that? Turns out, you just observed your cat’s third eyelid.

What is a third eyelid?

The third eyelid is medically referred to as a nictitating membrane. This membrane is essentially an extra layer of protection for the cornea, and also serves to moisten the eye while maintaining vision. The third eyelid is sometimes described as acting much like “a windshield wiper blade” by removing debris and pollen from the surface and redistributing tears over the cornea. It retracts into the inner corner of each eye (making it a somewhat disorienting spectacle for human observers). 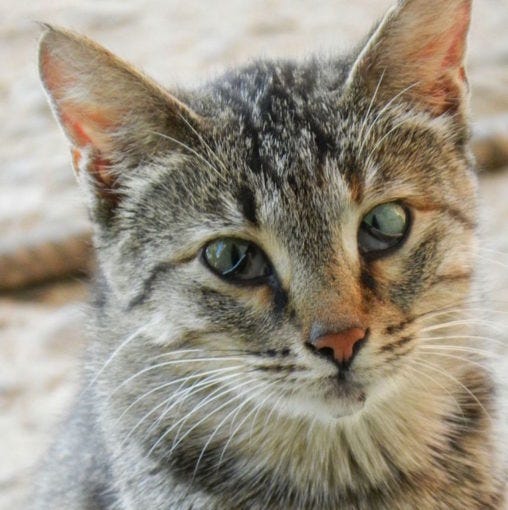 Cats and dogs both possess a third eyelid. So do birds, reptiles, amphibians, fish, and some other mammals. Your cat’s third eyelid functions as a shield for his cornea while moving through tall grass and during skirmishes with neighborhood felines or resistant prey. (Pro tip: Keep him indoors so he’ll never need that protection!)

Why don’t humans have a third eyelid?

Believe it or not, scientists think that humans did have a third eyelid, once upon a time. Through the course of evolution, the nictitating membrane was reduced to the tiny pink fold of tissue in the corner of your eye. This probably happened because, unlike cats, humans didn’t have to capture prey by biting or stalking through vegetation face-first.

Noticing your cat’s third eyelid could be a bad sign

Other than those brief moments when your cat rouses from his sleep, you shouldn’t see the nictitating membrane. If your cat’s third eyelid is present in one or both eyes, take him to your veterinarian to make sure he isn’t suffering from one of the following issues.

A corneal ulcer can occur if there is a scratch on the clear surface of your cat’s eye. The third eyelid may become elevated from this type of trauma.

The third eyelid sometimes presents itself if a cat is severely dehydrated or experiencing weight loss due to another health issue. Cats with glaucoma may be also show the third eyelid.

The nictitating membrane may also appear as a symptom of feline upper respiratory virus or conjunctivitis (pink eye).

Some cat breeds are more prone to issues with the third eyelid. The Burmese, for example, commonly experience “cherry eye,” where the gland of the third eyelid gets inflamed and swollen. In such cases the nictitating membrane should be surgically repositioned.

Your cat’s third eyelid is a perfectly normal part of his anatomy—until it becomes obvious. When in doubt, check with your veterinarian.