Birman Cat Colors: What Colors Can Birmans Be?

The Birman is a beautiful, eye-catching cat. Their colorpoint fur and bright blue eyes are instantly recognizable.

While the Birman cat is very distinct-looking, that doesn’t mean they are all identical. Birmans come in a variety of colors. Most Birmans will have a colorpoint coat accompanied by longer fur, setting them apart from other breeds.

Their coat pattern and colorings tend to resemble a mix between a Siamese and Ragdoll cat. However, this look is partly where the resemblance stops. Unlike the Siamese cat, Birman cats have medium to long coats that are extremely silky and soft to the touch.

Birman cats own their beauty and exude the confidence that you might wish you had for yourself. Yes, we are often inspired by our cats, and they know it!

Where did the Birman cat come from?

The legend behind the sacred Birman cat gives them a mysterious edge. Centuries ago in northern Burma (present-day Myanmar), it is thought that a sapphire blue-eyed goddess called Tsun-Kyan-Kse was worshiped by a temple priest named Mun-Ha.

When Mun-Ha was murdered, his companion—a white cat called Sinh—put his paws on his body and turned to face the goddess. Mun-Ha’s body turned from white to gold, while Sinh’s eyes turned blue and his legs became brown just above where his paws still lay on Mun-Ha. Other temple cats had the same coloring change. Soon after these events, Sinh died by Mun-Ha’s side.

This coloring on cats—white paws, darker legs, and blue eyes—became a symbol of purity and was highly regarded.

Another theory on the Birman’s history

If you’re not interested in legends and old stories, then you might prefer this explanation: It’s very likely that Birman cats originated when Siamese cats and long-haired cats mated. These long-haired Siamese-resembling cats were taken to Europe, and the Birman breed was solidified.

During World War II, the Birman cat’s existence was threatened, but Birman breeders were dedicated to keeping them alive and well. They worked tirelessly to preserve the breed. These cats eventually made their way to the United States, where they were welcomed with loving arms. 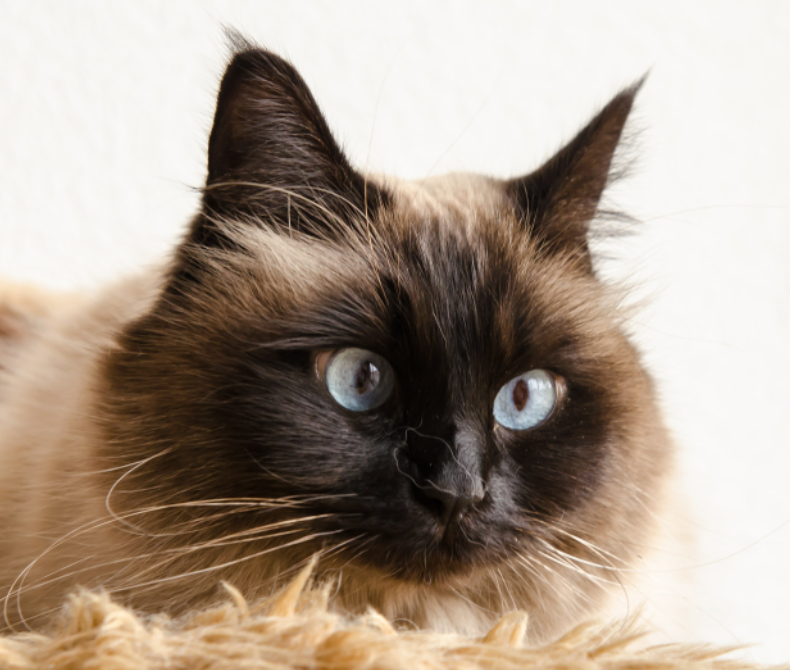 Despite the Birman cat resembling a long-haired Siamese cat, they are technically their own breed. There are a few things that set them apart.

Birman cats are colorpoint cats that have darker faces, ears, tails, and legs. The rest of their body is usually one solid color, but where their darker points are, other patterns might appear. Their coats are very soft and don’t tangle too easily.

These cats are also strong, sturdy, and medium to large in size. They are thick-boned and muscular yet very proportionate, making them feel compact when you pick them up.

Even though they are known for their colorpoint coats, if you were to see a Birman kitten, you might not recognize them at first. Birman kittens are usually born solid white, and their points darken as they age. The ultimate glow-up, if you will.

While you might be able to guess what color your Birman kitten will someday display, you can never be too certain. 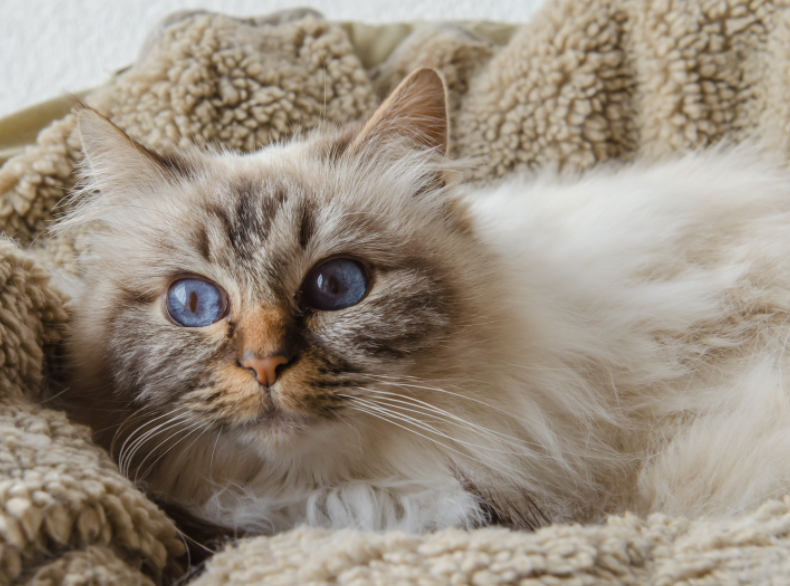 What color points do Birman cats come in?

Birman cats come in a variety of colorpoint variations. There are four main coat colors: seal point, blue, chocolate, and lilac. Your Birman could come in any of these four equally beautiful colors.

Some cat associations and councils will accept other colors, including red, cream, and tortie, but not other shades that occur.

Curious to know what your Birman cat’s coat might be classified as? Read on.

Seal point is probably the most common and popular coloring for a Birman cat. It’s the most similar to a Siamese cat’s coloring, so it’s easy to recognize. Seal point is also the darkest color that typically appears in the Birman breed.

Once a Birman has fully developed their seal point coat, it’s much easier to see the very dark brown, almost black coloring in the points that contrast beautifully against the cream-colored body and bright blue eyes.

After seal point, the next most common coloring for a Birman cat is blue. This comes across as a bit lighter than the seal point coloring. It appears to be a more muted version of seal point, almost nearly grey. Yet when you contrast this color against the light body coloring and blue eyes, the fur can come across as more blue than grey.

The blue Birman is an adorable and stunning-looking cat. Their coloring is considered to be a dilution of the seal point coloring, meaning this coat color is a little more faded.

The chocolate-colored colorpoint Birman is very similar to the seal point, just much lighter. They aren’t as deep brown as seal points, and while the contrast between their points and body is significant, the blending is more fluid than seen on the seal point.

Instead of the cool dark tones that both blue and seal point Birmans have, chocolate Birmans display much warmer tones.

Lilac Birmans are born white and take a bit longer for their color to develop. The lilac color that you see is very light and stays light until adulthood.

Adult Birmans may see their coloring start to deepen, but only slightly. These mature kitties might even out to a pink-grey color. This pink-grey hue is so subtle that it’s hard to differentiate from the rest of the fur.

Red Birmans appear as a dark orange color mixed with a cream base. A red Birman will stay pure white for a while before developing a mask and color around their points. Even then, the color will be very pale, and won’t get much darker as they age.

They both have orange tints mixed with their light base color, but the red is a darker orange, and the cream is a lighter orange. It could be argued that a cream Birman takes longer to come into their color, simply because it’s hard to determine when the color comes in!

Tortie Birmans are special and unique. You can classify a Birman as being a tortie cat when there are two colors mixed into their points. This color is only found in female Birmans (as 99.9% of tortie cats are female).

You can have seal torties, cream torties, blue torties, red torties, chocolate torties, and lilac torties. Each coat will look very different compared to the next, and no two will look the same. 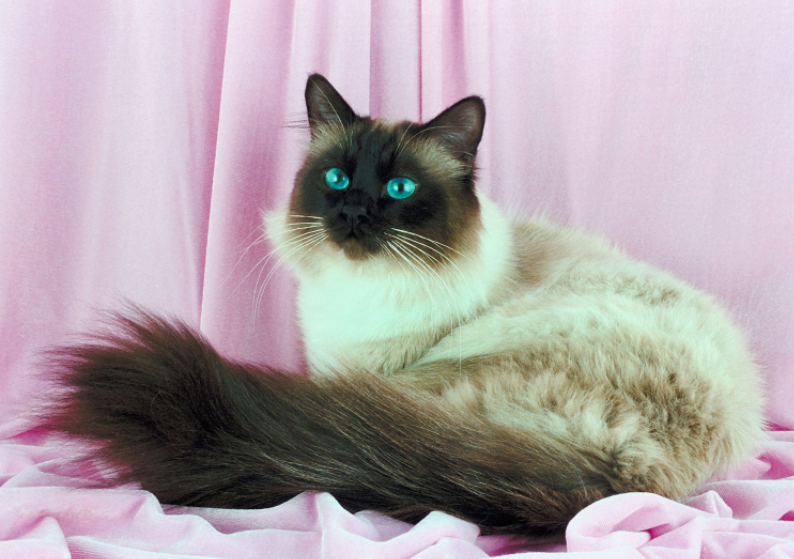 Taking care of a Birman

If you adopt a Birman, it is essential to play with them daily, keep them entertained, and give them plenty of love. As their most distinctive feature, you’ll also want to keep their coat in tip-top shape.

While their coats don’t require a lot of grooming, keep in mind that their fur is long: You don’t want that luscious coat dragging around in dirty litter… and neither does your Birman. In fact, one of the most common reasons for improper elimination is that a cat is displeased with the cleanliness of their litter box.

Their litter box must be up to snuff and out of their fluff, if you will. It’s easy to keep their bathroom clean with the help of a self-cleaning litter box.

Your life with a Birman cat will be filled with fun, cuddles, and companionship. No matter what your Birman looks like, it’ll be easy to love them unconditionally! 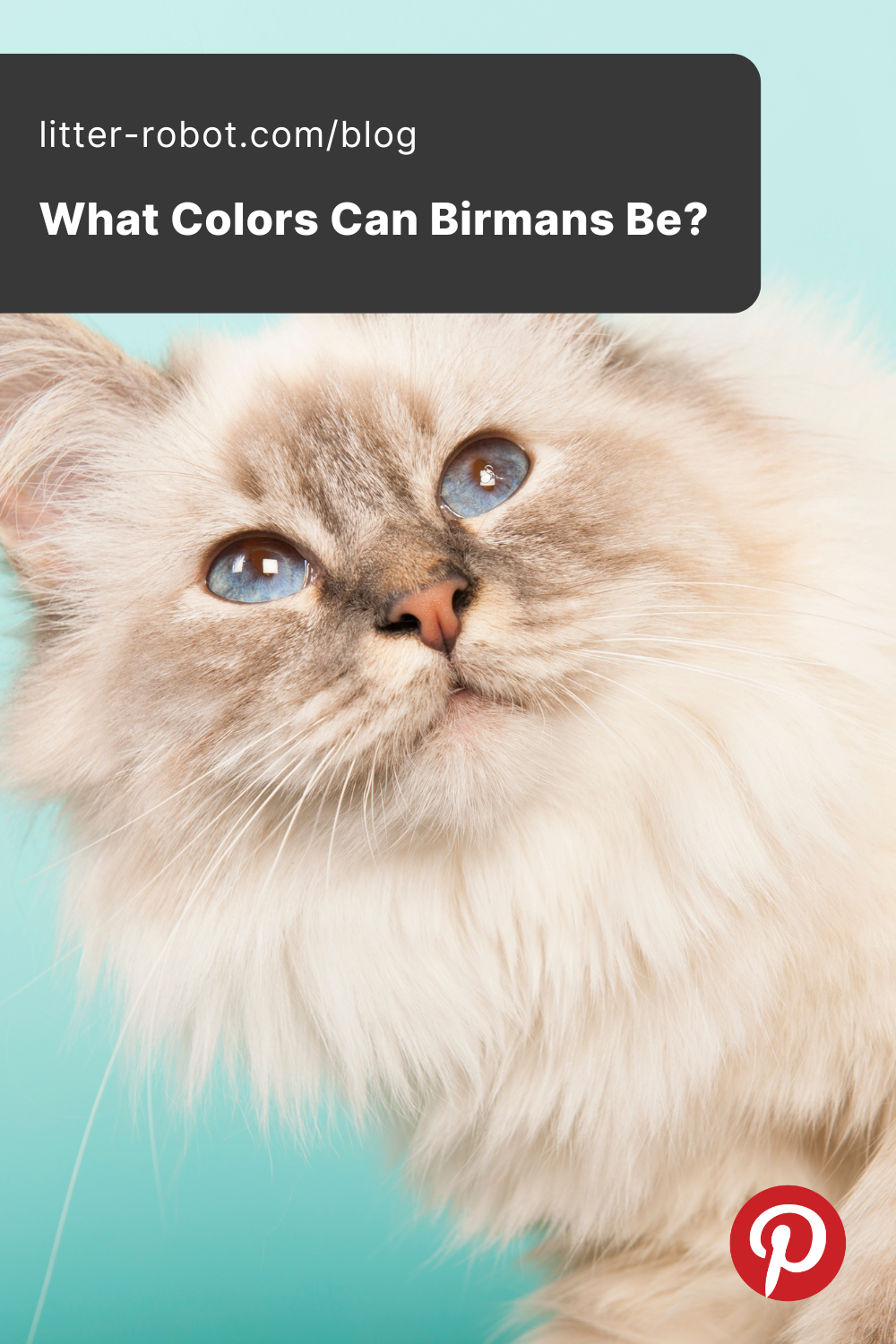