Ragdoll cats are beautiful and powerful felines. This kitty is a highly sought-after companion. Though poised and regal, Ragdoll cats are extremely loving and playful. You'll find your Ragdoll following you around and wanting to spend time anywhere they can keep an eye on you. (A trait we totally love.)

Overview of the Ragdoll cat 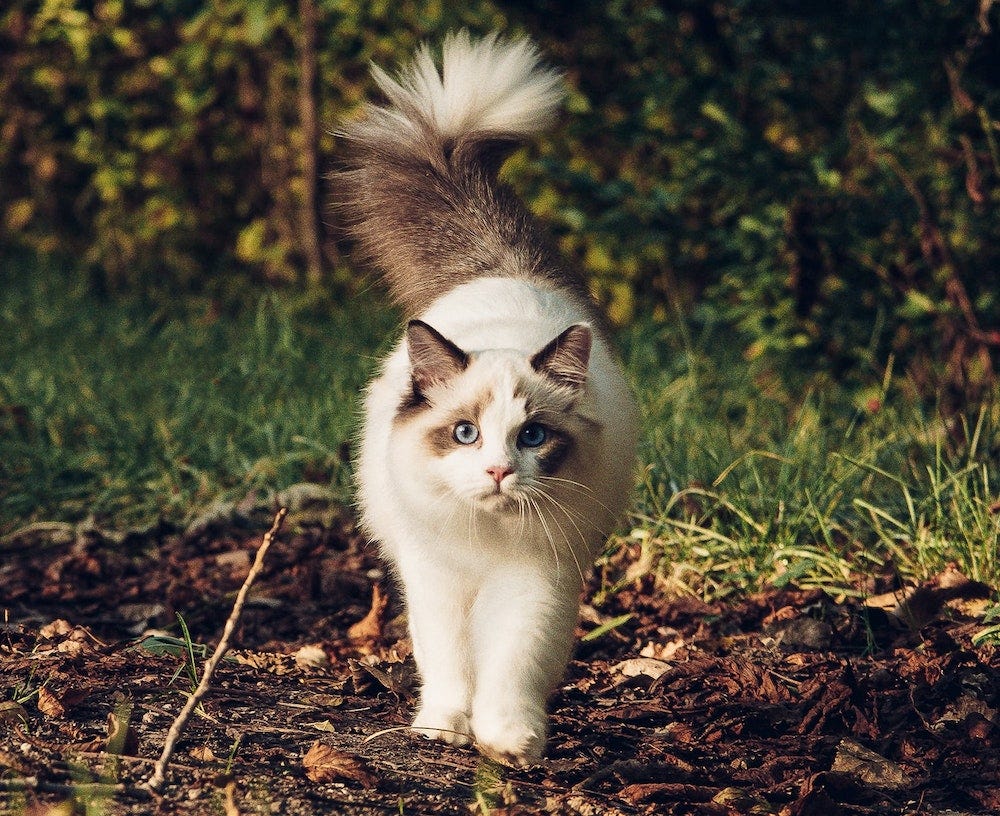 The Ragdoll is one of the largest domestic cat breeds. They have a striking and long colorpoint coat that makes them appear even larger than they are, along with beautiful blue eyes. Their name refers to the floppiness that they exhibit when picked up, similar to that of a ragdoll when you move one around.

This breed is slow-maturing, meaning that they take longer than the average cat to reach their full size. At 3 or 4 years old, a Ragdoll will have grown into their full stature and coat.

Most Ragdoll cats look a lot larger than they actually weigh, and this has a lot to do with their fluffy coat  Still, they can weigh quite a lot for a cat: Both male and female Ragdoll cats weigh up to 20 pounds.

Depending on exercise levels and lifestyle, your Ragdoll’s weight may fluctuate. Keeping them healthy through proper nutrition and making sure they are getting enough activity will help to maintain their body weight.

Ragdolls are muscular and heavy-boned. They have long limbs that are very strong. That, combined with a tail about the same length as their bodies, makes them look even longer. They typically range from 17 to 21 inches long, and their fur gives them a full look.

While they might be most recognizable for their colorpoint coats, a Ragdoll cat could end up with 5 variations for coat patterns: colorpoint, mitted, bicolor, lynx point, and tortie point.

Ragdolls can have a variety of colors in their coats, and many are known to have striking blue eyes, but that is not always the case.

Ragdoll cats live a long time when they are properly taken care of and in good health. Typically they will live for 13 to 17 years. Be ready to spend many days with your Ragdoll by your side!

History of the Ragdoll

The origin story of the Ragdoll cat breed is somewhat shrouded in mystery. We know that they came from Riverside, California, in the 1960s, from a lovely, partially feral cat named Josephine.

The late Ann Baker, a Persian cat breeder, came across the free-roaming Josephine, a long-haired white cat, that possessed exceptional genes passed down to her offspring. Yes, the beautiful ragdoll kittens you see today are descendants from rescues—we can definitely give that our seal of approval.

Josephine had a litter of kittens, three of which helped create the first official Ragdoll cats. Ann Baker then worked to make the features of the Ragdoll permanent.

The male kitten, named Daddy Warbucks, was born with a cream-colored coat, dark points, and white mittens. He’s considered the first Ragdoll and was mated with a second-generation kitten to produce two other offspring.

Daddy Warbucks and his offspring were all accepted as the first registered Ragdoll cats with the National Cat Fanciers' Association (NCFA) in 1966. From there, the breed blossomed and skyrocketed in popularity.

Breeders began taking an interest in the Ragdoll cat. Ann Baker trademarked the name in 1971. She created the International Ragdoll Cat Association (IRCA), which set strict guidelines for breeding practices.

Not everyone agreed with her beliefs, and breeders Laura and Denny Dayton set off on their own to breed Ragdolls so they could be accepted into cat associations. They later formed the Ragdoll Fanciers Club International (RFCI) and helped to introduce the breed to Britain. 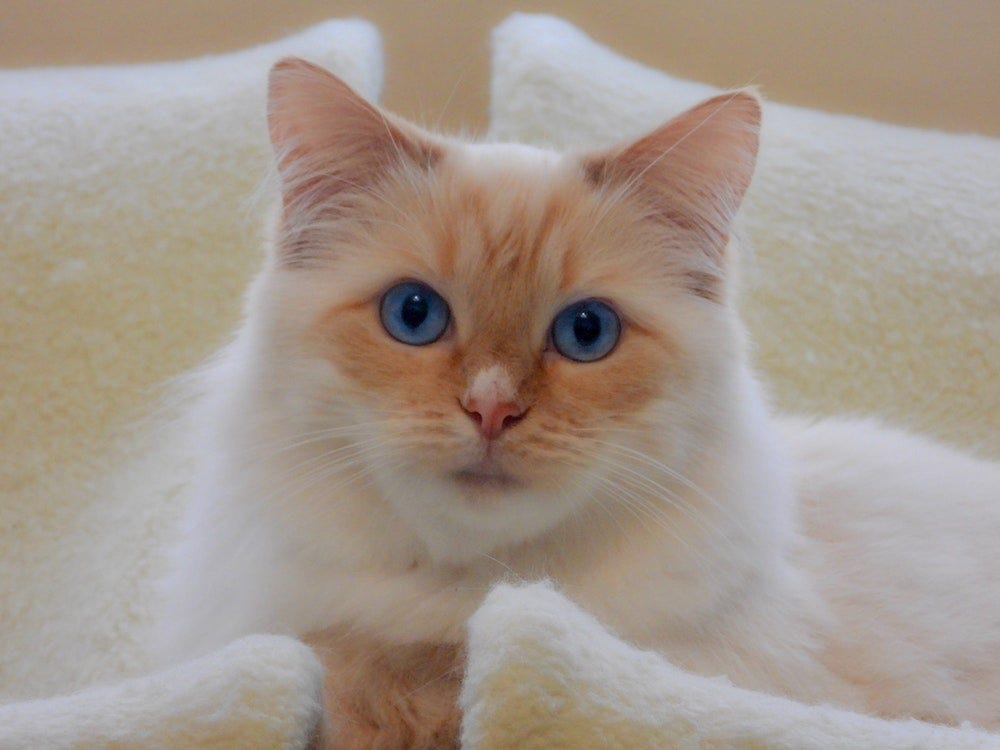 The main features that stand out about the Ragdoll cat are their large size and fluffy coat. They are broad and full-looking, taking up a lot of space as they move around the house. Ragdolls also have strong, thick necks and large heads that are very proportionate to their bodies.

Their bright blue eyes contrast with a usually darker face, and the rest of their features are sharp and angular. They are a beautiful breed with lots of love and dedication to give to their cat parents.

Ragdoll cats are friendly and attentive, with moderate activity levels. Do they like to play? Most definitely. But they are more than happy to snuggle up on the sofa with you after a long day.

These cats are often very friendly towards other animals, both dogs and cats. Yet they will maintain their independence from other pets in the house. Ragdolls are also very tolerant towards children and make great family pets.

Your friends and family will be wondering where your Ragdoll is every time they come over, just to bask in their beauty and touch their incredibly soft coats. These cats are very laid-back and sweet, making them an excellent pet for someone who wants to spend a lot of their time relaxing with their animal. They are typically pretty quiet, both vocally and in their movements.

Caring for a Ragdoll

Even though the Ragdoll’s hair is long, the undercoat is sparse, which means it mats less than other long-haired breeds. Grooming is still essential: Brush your Ragdoll a few times a week to keep up with shedding and to maintain a nice, polished coat free of tangles. If you make this into a gentle game, your Ragdoll will likely begin to enjoy the grooming experience.

These cats should stay indoors because they are likely to roam if allowed outside. They are easily trusting of other people and motivated by food, so they could end up hanging out with your neighbors for an extended stay! 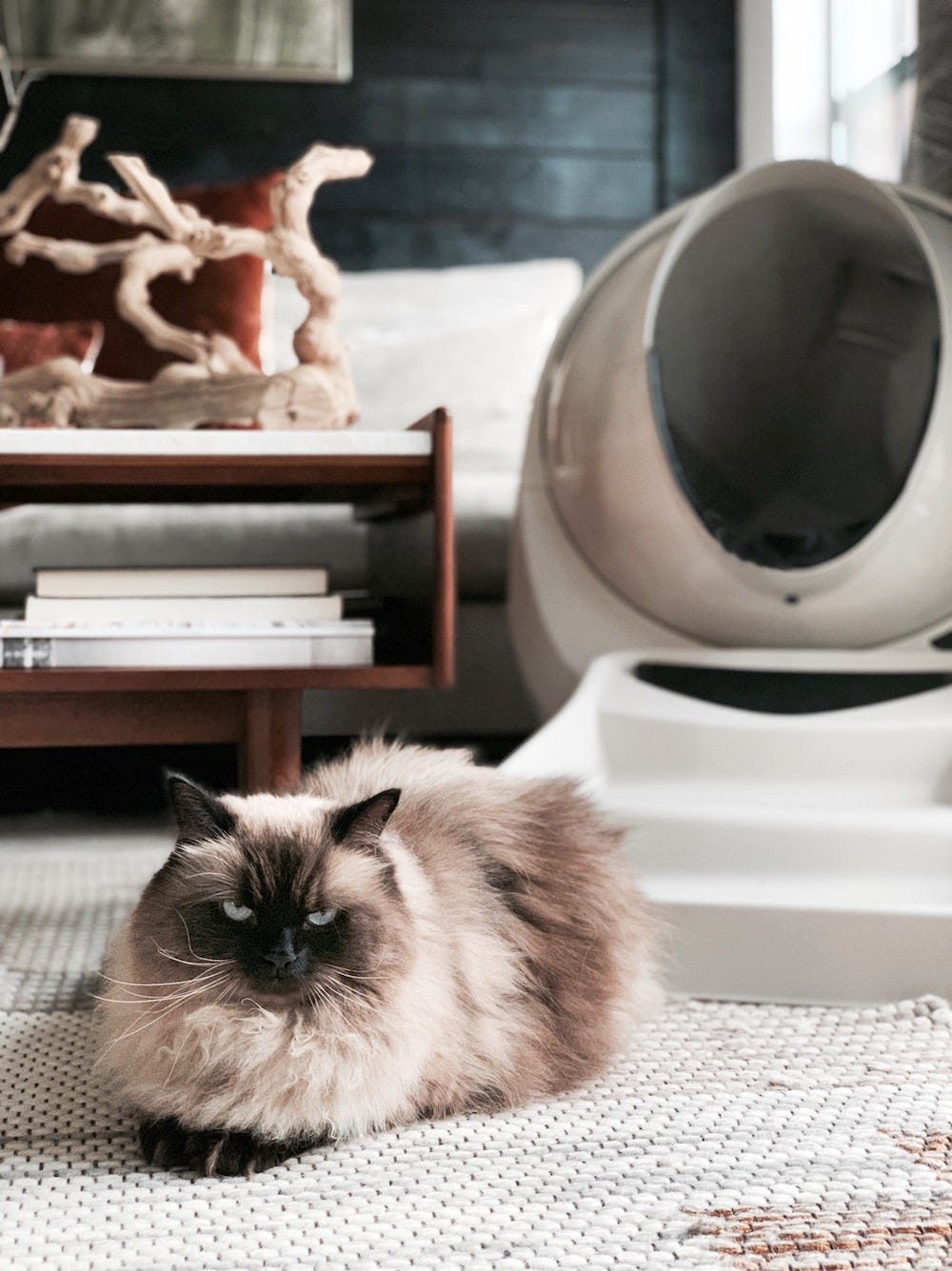 Create a quiet and accessible environment for your Ragdoll to use the litter box; a self-cleaning litter box like Litter-Robot will ensure their paws only step on clean litter. Provide plenty of toys and cat trees for perching, and your cat will thrive.

Keep up with your Ragdoll’s dental hygiene to prevent gum disease and bring them in for check-ups with their veterinarian at least annually. This will help give you peace of mind that your fur baby is healthy.

The Ragdoll cat is a generally healthy breed. The most commonly diagnosed heart disease in this breed is hypertrophic cardiomyopathy. This is when the heart becomes less efficient due to a thickening of the walls around the heart. Genetic tests can be done early on to detect how at-risk your Ragdoll is.

This cat breed is also prone to bladder stones.

Having a Ragdoll cat means your life will be filled with laughs, love, play, and true companionship. These cats do require someone who can give them attention and respect. If you don’t want a cat that will constantly be trying to crawl onto your lap, this might not be the one for you, and that’s okay!

No two Radgolls are exactly alike. They may have their own quirks and habits that aren’t mentioned here. Learning more about your own kitty each day is a joy, and your Ragdoll can’t wait to show you their full personality. 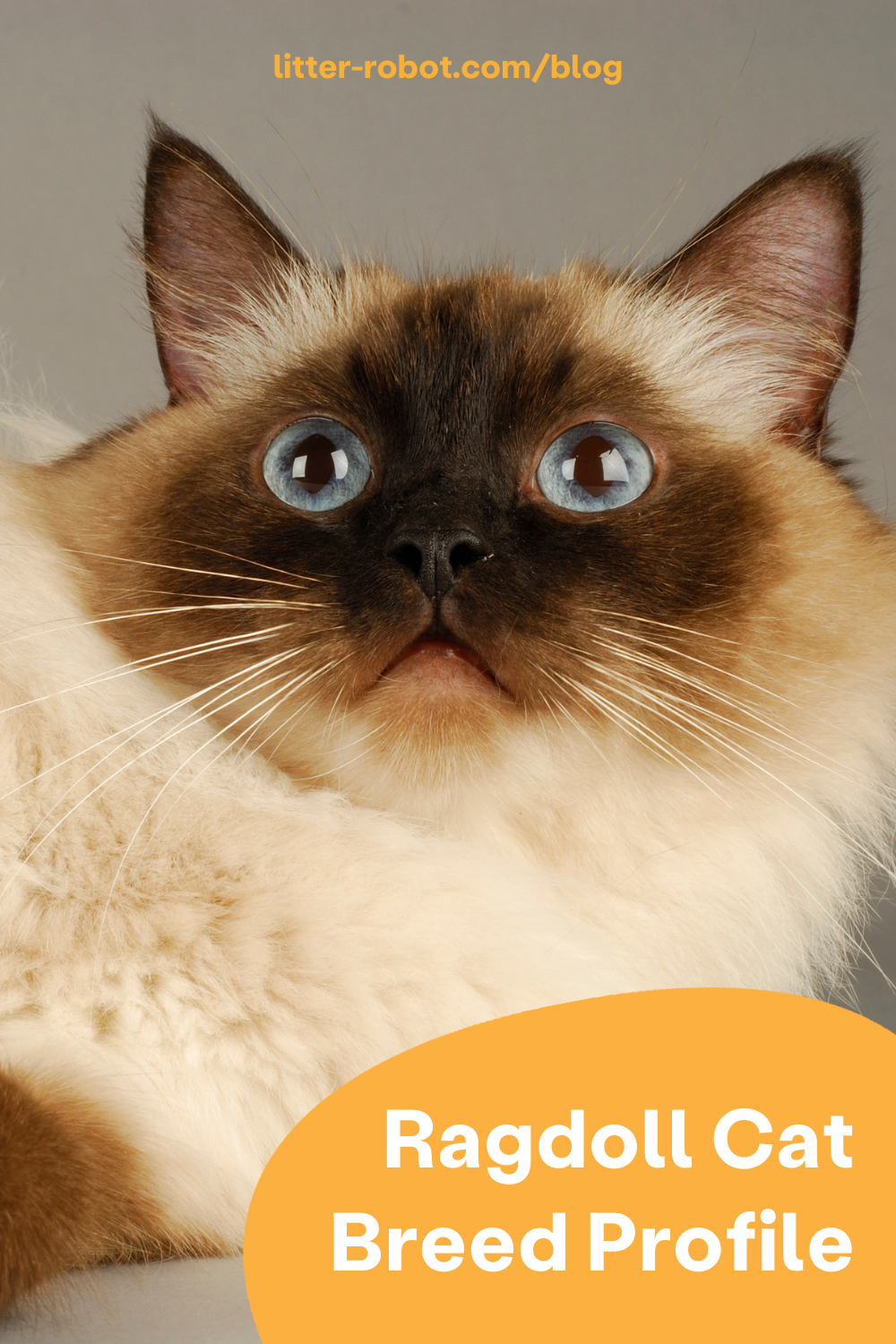