The Birman cat has a very distinct look that stands out from other cat breeds. They have a uniquely long and silky colorpoint coat, as well as cute white feet and striking blue eyes. They exude elegance and royalty, similar to their cousin, the Siamese cat.

Though regal and impressive, these cats are anything but intimidating. They are extremely affectionate and loving toward their families. Birmans are very curious about new people and situations, and don’t get spooked or disinterested easily.

This means Birmans are very active family members that want to contribute and spend time with everyone. They’re likely to stick close by to monitor what’s going on in the house.

If you want to add a sociable and loving companion to your life, the Birman is a great choice. Overall, they are lower maintenance for grooming and play, but still require you to be active in their lives and well-being.

Overview of a Birman Cat 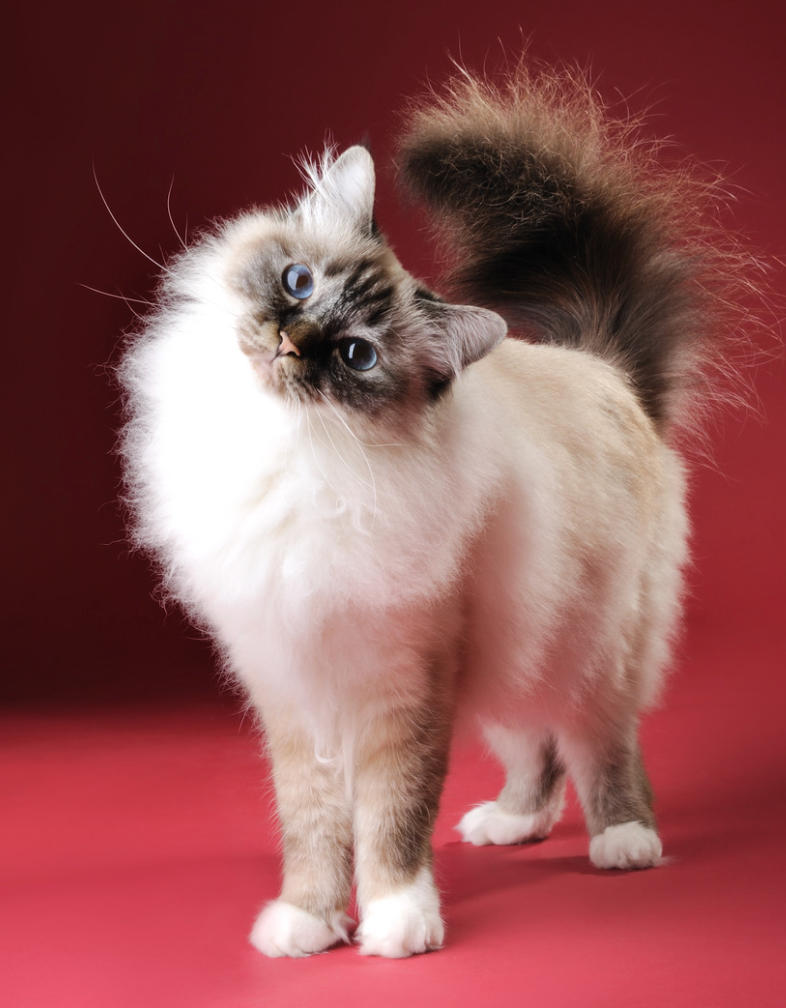 The Birman cat is considered a medium-sized to large cat. These cats take longer to mature, at about 3 whole years.

When Birman cats reach their full maturation, they will weigh between 7 to 15 pounds, with males being slightly larger. These cats are well-proportioned, so their weight is comfortably distributed.

From the tips of their noses to the ends of their tails, the Birman can measure between 15 and 18 inches long. Their bodies are elongated but slightly compact, and their tail is proportionate to their bodies.

The coat of the Birman really makes this cat stand apart from the Siamese cat. The Birman’s coat is medium to long in length, very silky but with rougher fur around their necks. Even though their coat is long, it doesn’t mat easily and doesn’t require daily grooming. Interestingly, they have no undercoat—just the top layer.

However, if you pick up a Birman kitten from a rescue or reputable breeder, you might be surprised to find that these kittens are born all white and “glow up” as they age.

With proper care, the Birman cat is rather healthy and can live 12 to 16 years.

You need to give your Birman plenty of exercise and love them unconditionally (even when they knock over your favorite vase) to see them reach their full potential.

Since they are prone to obesity, watch their meal portions carefully, lest they try for second helpings.

History of the Birman Cat 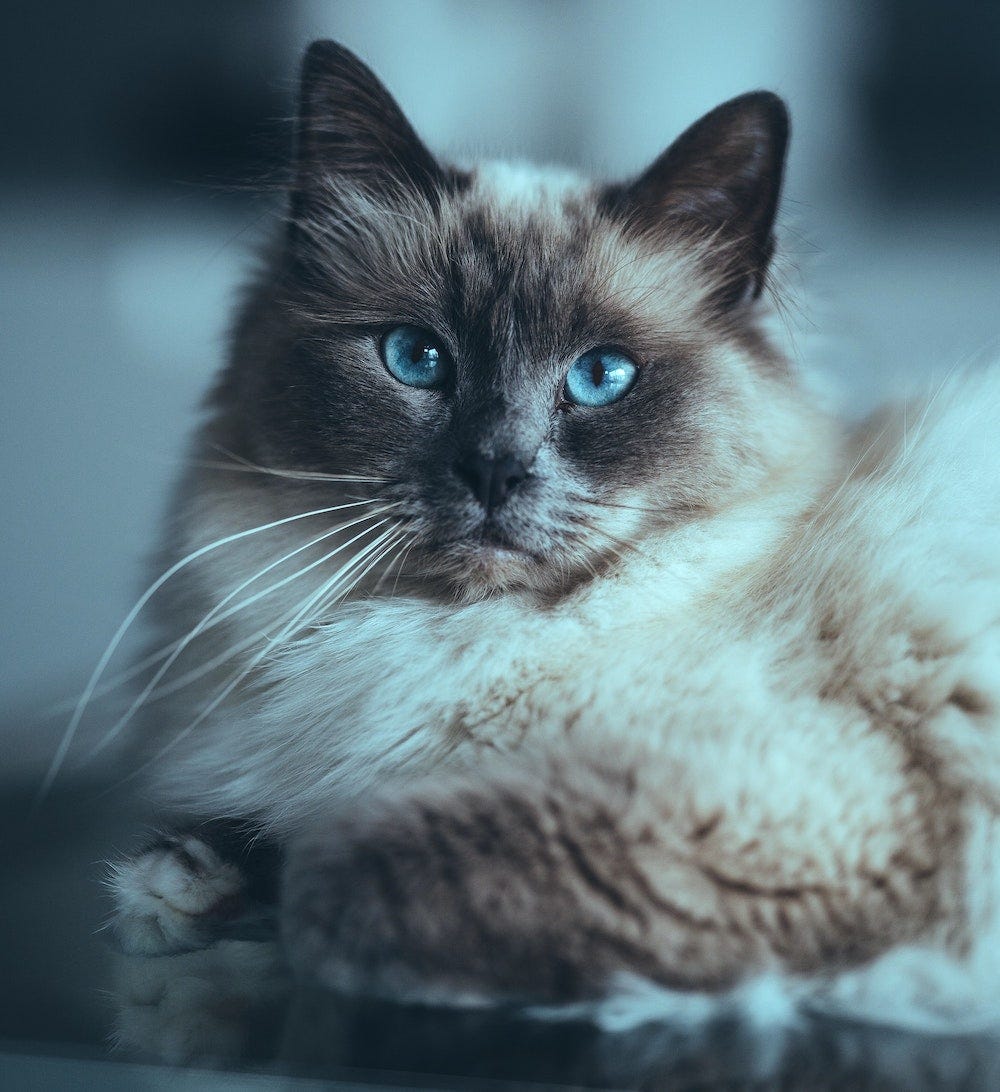 The Birman cat is a breed surrounded by mystery and ancient legends. They are also known as the “Sacred Cat of Burma” due to claims that they were the companions of temple priests in northern Burma (present-day Myanmar) on Mount of Lugh. There are both legends about how this cat originated as well as more substantiated claims about the breed.

Regardless of what you choose to believe, the Birman that we know today is a great companion that their families should worship.

The goddess Tsun-Kyan-Kse with sapphire blue eyes, who was worshiped at the Temple of Lao-Tsun, had something to do with the birth of the Birman.

A priest, Mun-Ha, used to pray daily to the goddess Tsun-Kyan-Kse, accompanied by a white temple cat named Sinh. One night, the priest was murdered, and as he was dying, Sinh put his paws on the priest's body and faced the goddess as if to pray.

When this happened, the priest’s body turned from white to gold, and the Sinh’s eyes turned bright blue like Tsun-Kyan-Kse. Where the cat had been touching the priest, their legs turned brown, while their paws turned white. All of the other white temple cats had the same change of coloring. Afterward, they were regarded as a symbol of purity.

Sinh stayed by Mun-Ha for seven days before dying as well. This was a symbol of Sinh, the cat, carrying the priest's soul to heaven. To this day, when a temple cat dies, people believe it is carrying the soul of a priest to paradise.

Rather than starting hundreds of years in the past, this tale states that the Birman came about when Siamese cats mixed with white long-haired cats. This created a Siamese-looking cat with long, fine hair.

Likely, a few cats were brought from Burma to France, where they were bred to get to the Birman that we know and love today. After World War II, the Birman breed was endangered—some say there was only a single pair of cats left! It took hard work and dedication to get the Birman breed back as strong as ever.

The Birman cat made its way to the United States in the 1950s and is popular from coast to coast. 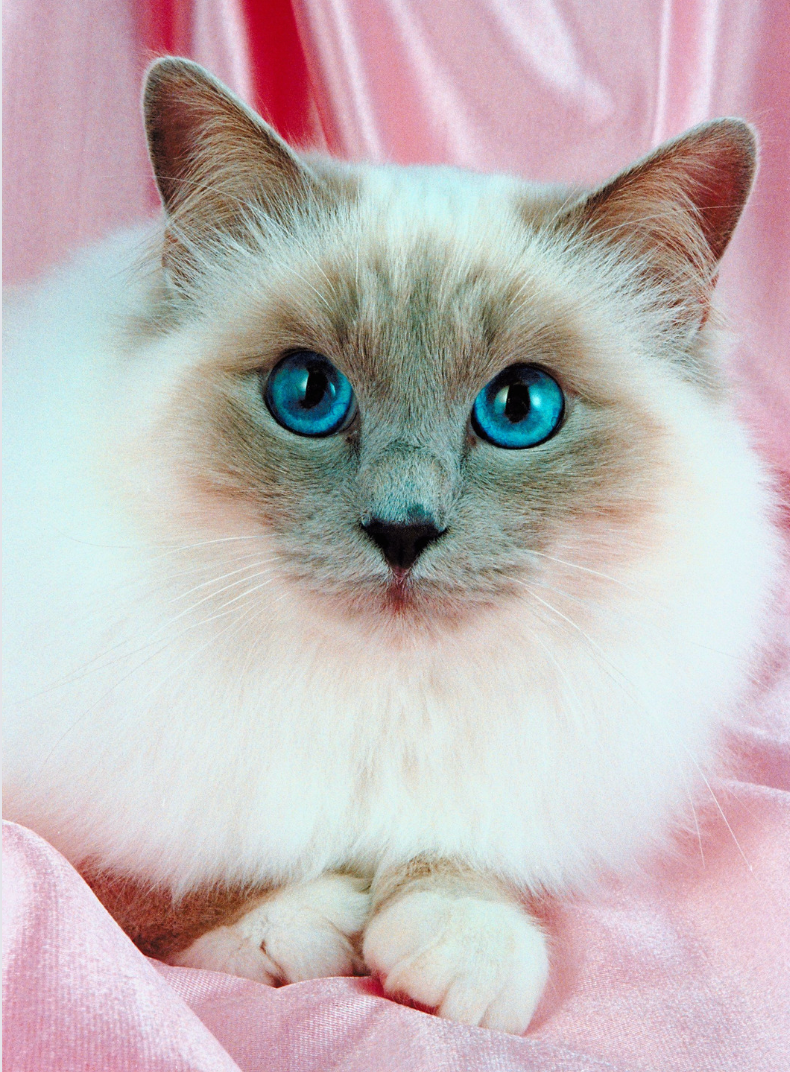 The most obvious characteristic about the Birman is their deep sapphire blue eyes and pure white paws. Not only will these deep blues pierce directly into your soul, but they will also have you understanding why this cat was once worshiped.

Their colorpoint coat gives them the look of a long-haired Siamese cat, which is appealing to many. Their long, fine fur is extremely soft to the touch and surprisingly requires little grooming (especially when compared to the Persian).

They have strong and thick bones and are relatively sturdy, contributing to good balance.

You will fall head over heels for your Birman the first time you see them. They are cats that deserve your time and attention. This breed is used to being adored, so don’t let them down.

The Birman is intelligent and unafraid. They will be happy to greet new people and get a feel for them. They ultimately want love and attention, but they will still investigate each new person to see if they are worth their time.

These cats are pretty easygoing and will allow you to pick them up and hold them. They are typically quiet (unlike their Siamese cousins) and make a great companion looking for a laid-back lifestyle. So while they want your love and affection, they really enjoy lounging around all day. 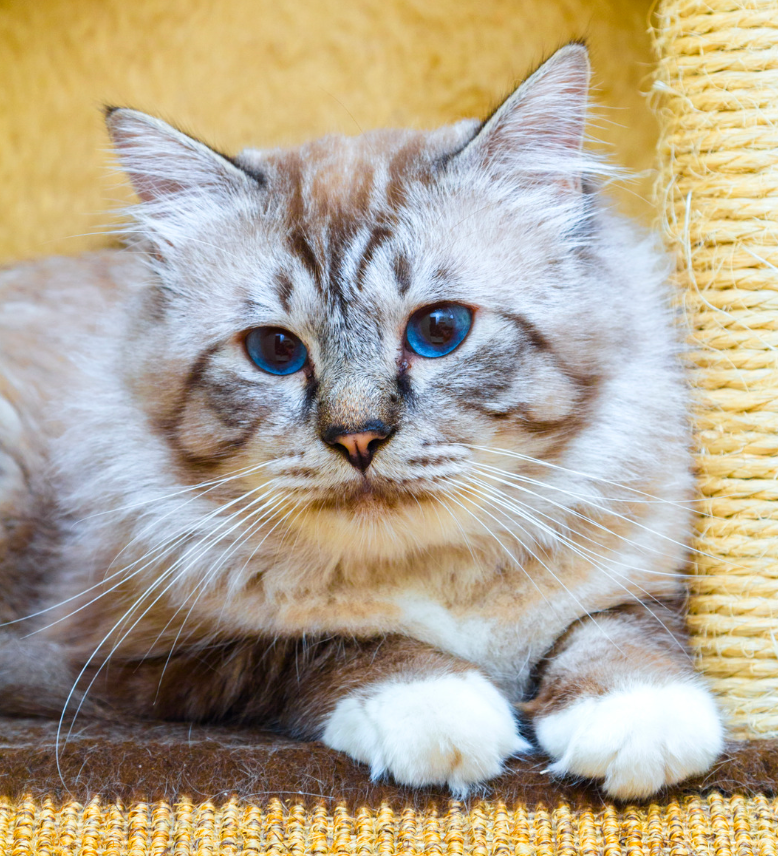 Even though their hair is fine and long, the Birman doesn’t need frequent grooming sessions. Once or twice a week will help to remove loose fur and debris that collects in their fur.

Due to the chill lifestyle the Birman favors, you should watch their weight and activity. You will need to incorporate playtime into your daily routine to ensure your Birman is getting enough exercise as well. They would rather play with you than entertain themselves.

Your Birman will want a clean and tidy space to do their business. To avoid issues that arise from a dirty litter box and to keep your kitty happy, you should consider Litter-Robot 4. This is a self-cleaning litter box that keeps your cat’s litter fresh all day long.

The Birman is typically a very healthy cat, which is great news. However, as with all cats, health problems can arise. In these cases, it is always best to be prepared.

Larger cats can be more prone to hip dysplasia. This is when the ball and socket in the hip are misaligned, causing them to rub each other. This results in pain and discomfort that can impede movement. It can be very uncomfortable and creates more issues for your pet over time.

Additionally, the Birman might develop a condition called hypertrophic cardiomyopathy. This is when the walls around the heart thicken, making it more difficult for blood and oxygen to pass through.

Fun fact: this cat might just be your new best friend.

Consider the Birman cat for a loving, gentle, and inquisitive pal. This cat is overall a great companion that is friendly and affectionate.

If you have big groups over or live in an apartment with neighbors, your Birman won’t mind one bit. Instead, they will be excited and anticipate the next time everyone comes to visit them—they are the life of the party! 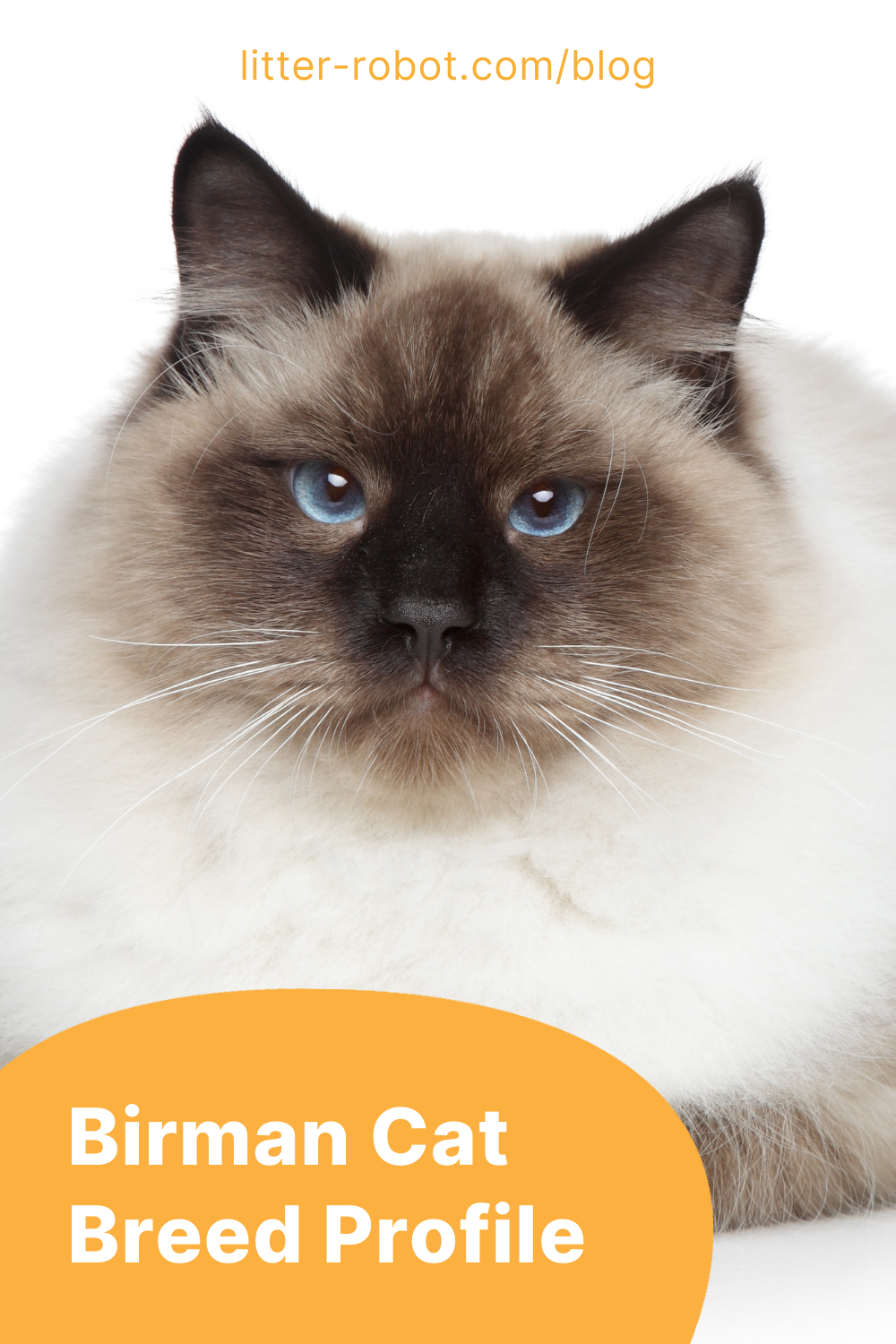