Meet a bonafide star: Often recognized from the animated Disney movie “Lady and the Tramp,” the Siamese is an iconic and elegant cat breed that made its debut long before the silver screen. The Siamese breed is easily distinguished from other cat breeds, with their striking coat pattern of darkened points (ears, feet, face, and tail) and light-colored body. They are long and slender, and seem to slink as they walk.

This breed has a storied history and is very affectionate and playful. Fans of the Siamese call them “Meezers,” and they know just how integrated they can become with their families. Their temperaments are entertaining and inviting—they make a great companion.

Overview of the Siamese cat 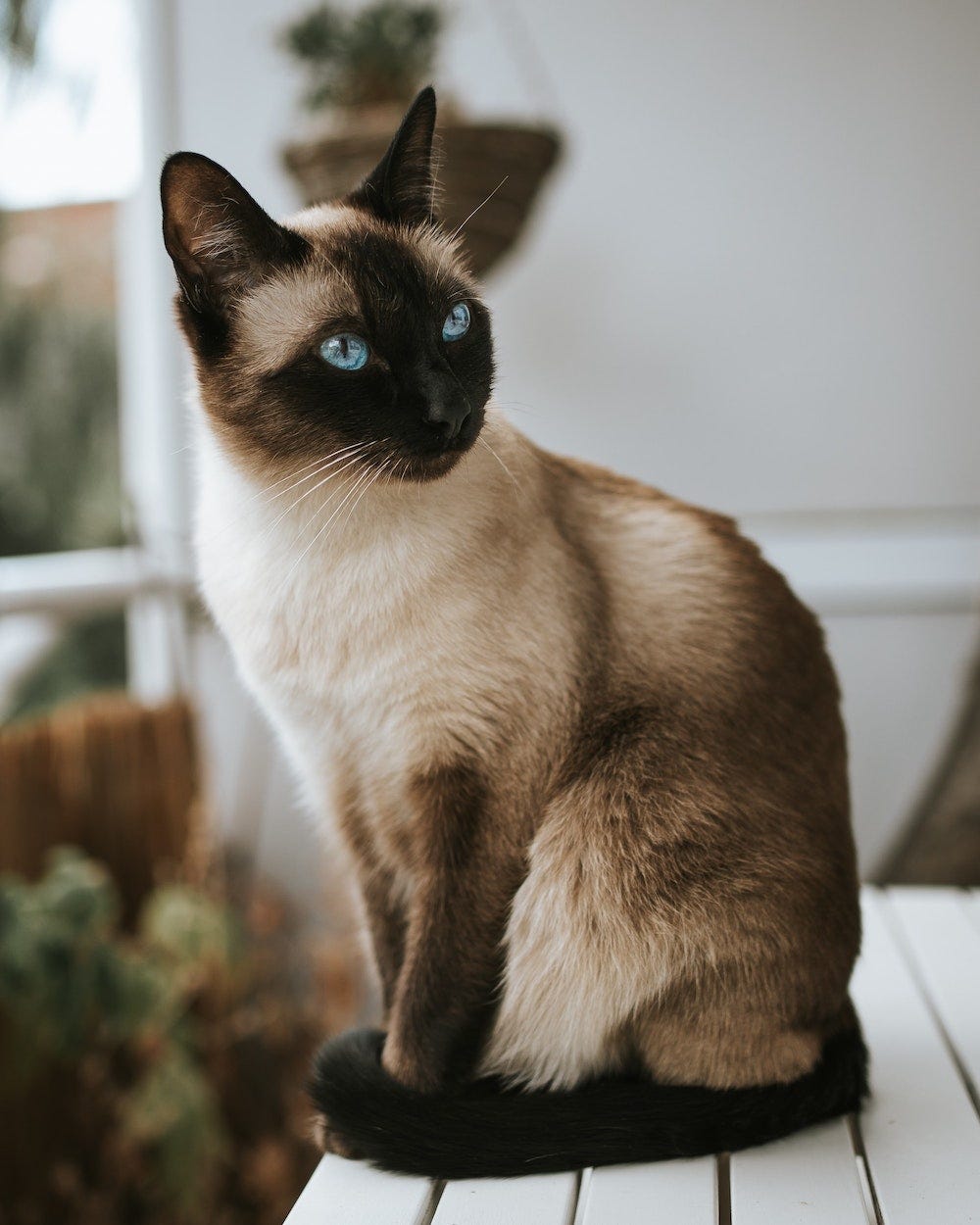 The Siamese cat is considered a medium-sized cat. They are long and slender with big ears and a slim tail.

The Siamese cat typically  weighs between 7 and 13 pounds, with males being slightly larger than females. These cats are fairly active, so maintaining a healthy weight shouldn’t be too difficult. They are typically very slender, and weight gain is quickly noticeable.

The Siamese cat isn’t very large—they’re no Maine Coon or Norwegian Forest Cat, at least. From their noses to the ends of their tails, the Siamese cat is up to 14 inches long.

The quintessential characteristic of the Siamese cat is their colorpointed coat pattern. Their fur is rather short, and they don’t shed all too much. The Cat Fanciers’ Association recognizes the four original Siamese colors for cat show contestants: blue point, lilac point, chocolate point, and seal point.

Siamese cats have light-colored bodies and darkened fur around the points of their body. This means that their faces, paws, tails, and ears will all be darker in contrast to the rest of their fur.

Siamese have a life expectancy of 10 to 15 years. With proper care, your Siamese can live a long and healthy life. Annual veterinarian visits are essential. 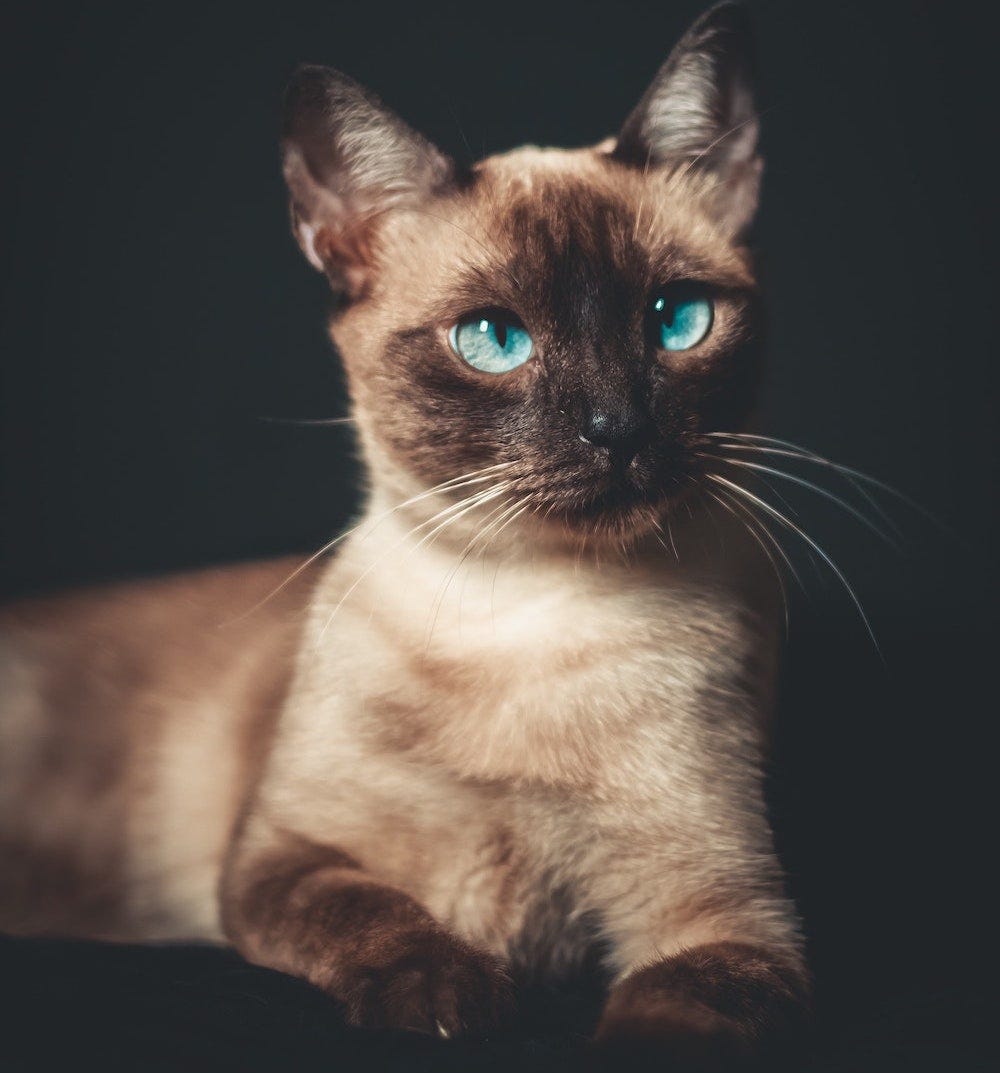 The Siamese cat’s history goes so far back that you could consider them an ancient breed. There are books dating back to the 14th century that show depictions of Siamese cats. This breed was so highly regarded by the people of Siam (modern-day Thailand) that they were rarely given to outsiders. This cat was a favorite of the Thai royal family.

While they lived for hundreds of years in Thailand before spreading further West, they made their way to Europe in 1884. In Bangkok, the English consul-general, Edward Gould, obtained a breeding pair of Siamese cats, Pho and Mia. Gould then brought these two cats back to Europe and gifted them to his sister.

The next year, his sister decided to import two more Siamese cats, and from there the breed began to make its way into the hearts of Europeans. These two cases of Siamese cats being imported from Thailand are the starting point for the breed that is well-loved today. Breeders in Europe became fascinated with this cat and saw their potential.

Appearance in the Western world

Through selective breeding, Siamese cats slimmed down and developed wedge-shaped heads. They started to look more like ancient Egyptian cats as the original Siamese cat characteristics faded. Their first appearance at the London Crystal Palace Cat Show drew concerns. Breeders worried that the physical changes could present health risks, and they began working to preserve the “Old Style” of the breed.

The first Siamese cat to enter the U.S. was a gift to President Rutherford B. Hayes and the First Lady in 1878. This was the first Siamese to touch down on North American soil.

After moving into the White House, Siamese cats became very popular in the U.S. Now, the Siamese is highly sought after in North America and has been placed in many breed shows throughout the world as a top contender.

The traditional Siamese is thought to have come directly from Thailand and had survived there for hundreds of years. This cat is big-boned with a round face, and is extremely vocal (cue the adorable meows) and loyal to their families.

The modern Siamese is also referred to as the “Extreme Wedge Siamese.” This cat was man-made and was created through breeding the two original Siamese types. These cats are much more elongated, willowy, and thin. This makes their features, like blue eyes and large ears, stand out against their slender form. 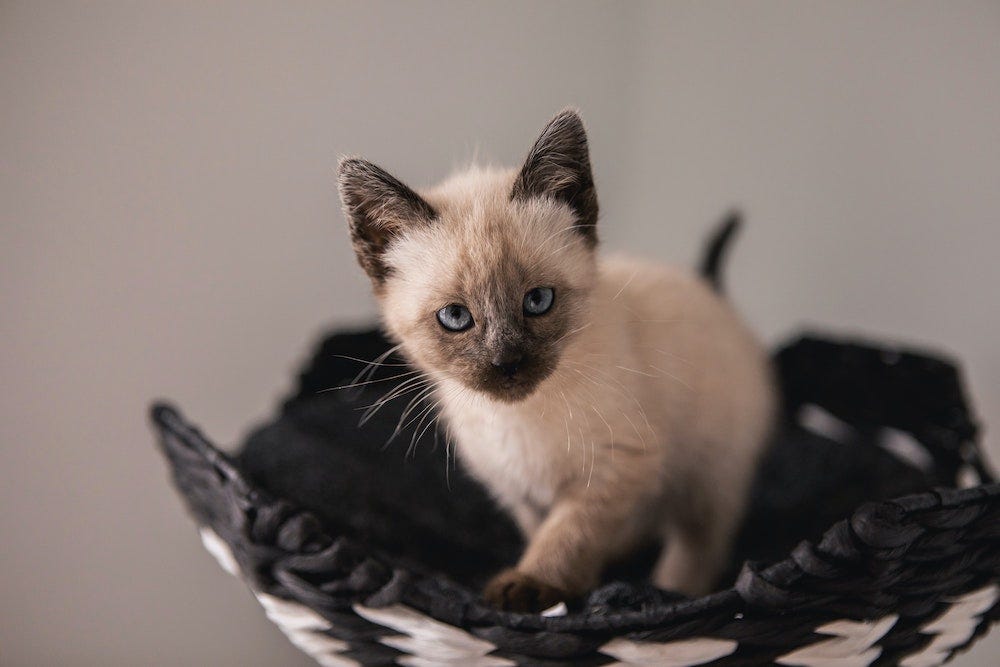 Siamese cats are typically known for their long, thin, and tubular bodies, big eyes and ears, and pointed coat. Some might say that the Siamese cat is the easiest cat to recognize because they are so distinct-looking compared to other breeds. Males might be a bit larger than females, but they aren’t overbearing in size in general. They are balanced, muscular, and agile.

These cats are incredibly vocal. If they want your attention, they are going to let you know! You won’t be prepared for how much the Siamese cat will talk to you. They are also very dependent cats and want to spend time with their families. If they are alone for too long, they are likely to get lonely or bored.

The personality of a Siamese can be described as affectionate, loving, kind, and playful. They need to be entertained and want their families to participate in their games. They get along great with other pets with similar energy levels and children who want to form a bond and interact properly with them.

Siamese cats are very close to their families and depend on them for many things, so forming bonds with multiple people in the family is not unlikely.

These cats thrive on attention, meaning if you are someone who is not home often or doesn’t have another pet, your Siamese might struggle. They can quickly become depressed if they are left alone too frequently. (But remember, two Siamese cats cause a lot more mischief than just one!)

If you want a quiet cat, this is not the one for you. Fans love how vocal and entertaining the Siamese cat can be, but that’s not for everyone. If you want a quiet home, your Siamese will be sure to break the silence almost constantly. These felines want to have conversations with you and let you know how you feel—so you have to be prepared to listen.

Caring for a Siamese

The Siamese is quite active and can get bored quickly if you aren’t fulfilling all their needs. Having plenty of toys and tall cat trees for your Siamese to explore will help to keep them engaged. Spending time with your cat is essential. 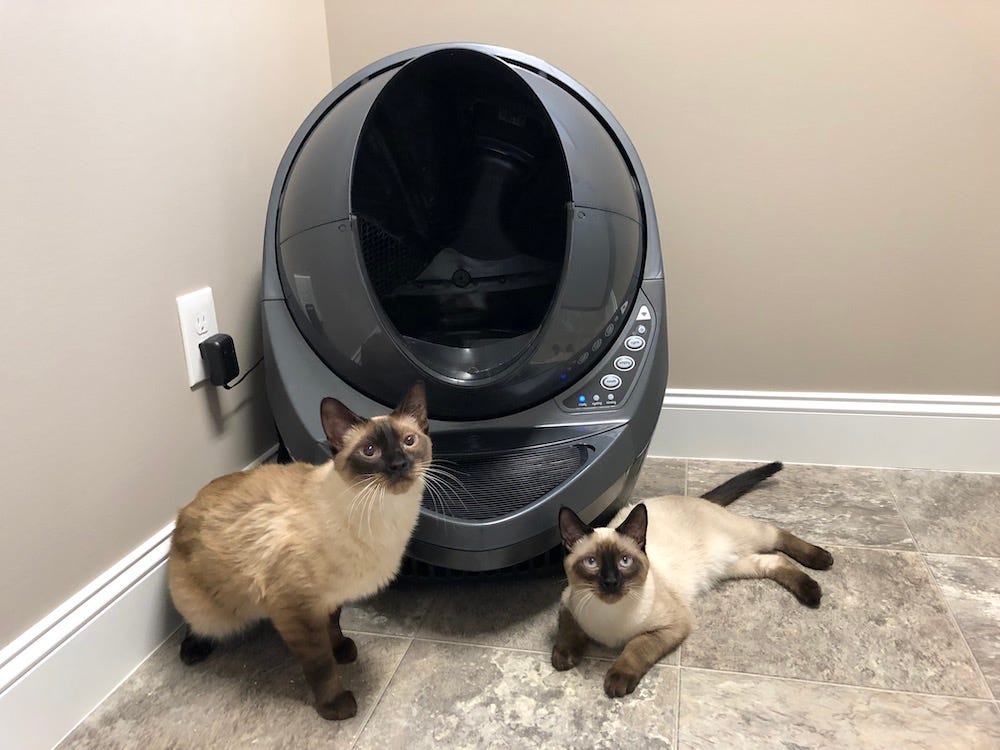 Another must? Keeping your cat’s litter box in clean condition. The Siamese cat is practically descended from royalty, and they should expect nothing less than fastidiousness with their litter box. To maintain the cleanliness of your litter box, consider purchasing Litter-Robot. This automatic, self-cleaning litter box provides a clean bed of litter for every use and helps keep odors at bay. Your house will smell fresher, and your cats will feel fresh as well.

The most common health condition seen in Siamese is less-acute vision. These cats used to be born cross-eyed, but that trait was mostly bred out over a long period. Still, their vision is somewhat lacking, which is an important reason to keep this domestic cat indoors. Siamese cats are also prone to progressive retinal atrophy, which can lead to blindness.

Due to inbreeding, they’re more at risk of having kinked tails. Additionally, Siamese kittens and cats can struggle with:

The Siamese is a famous cat breed, having appeared in classic films such as "That Darn Cat!" and "The Incredible Journey."

Loving a Siamese cat will bring you years of enjoyment. You will develop an unbreakable bond with your Siamese, and, in return, they will show you all the reasons why they are so loved across the world. 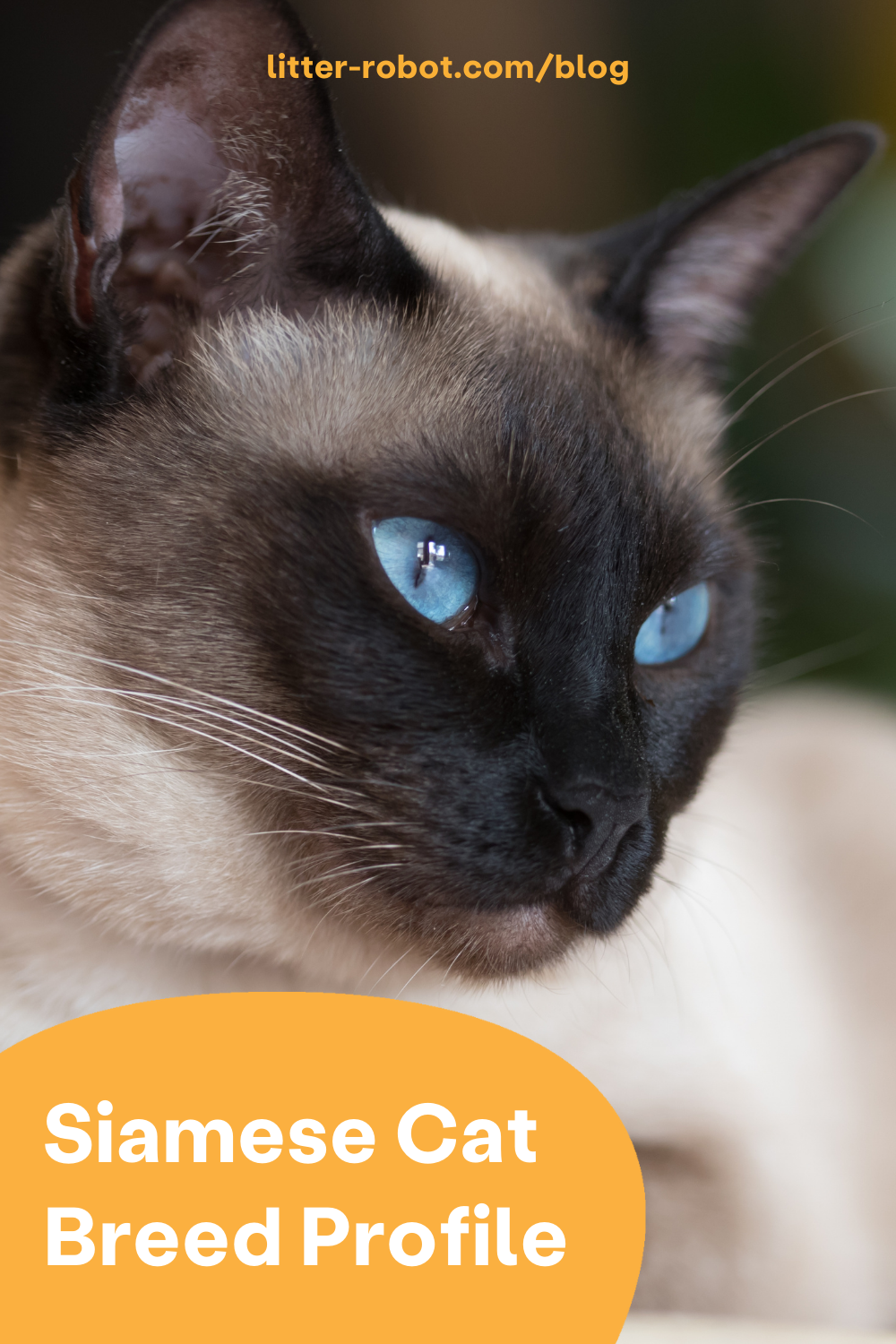