Masks, capes, and saddles: Among their many special qualities and interesting history, you might say tuxedo cats are the only felines that wear costumes all year long! Let’s delve into facts about the adorable bicolor cat, and, more specifically, the tuxedo cat.

There’s no such thing as a tuxedo cat breed

Like tabby, calico, and tortie, “tuxedo” is not a cat breed. Instead, this fur pattern describes a bicolor cat with a black and white coat. Tuxedo cats typically display a solid black coat with white patches on their chest, belly, paws, and sometimes the chin.

Like the men’s formalwear for which it’s named, “tuxedo” coloring on a cat refers to black and white. However, you’ll find instances of orange, silver, grey, and tabby bicolor cats. All equally adorable, in our opinion!

One color constant? White whiskers! Almost all tuxedo cats will have white whiskers, in contrast to their typically black fur. Furthermore, tuxedo cats tend to have green or yellow eyes.

While “bicolor” sounds like a simple, two-color cat coat, there are actually many variations of the bicolor pattern. You’ll most commonly find white patches on a cat’s chest and belly, followed by the front paws.

A “white spotting scale” (named after the white spotting gene responsible for the pattern) measures the amount of white on the coat. This scale ranges from low-grade to high-grade. 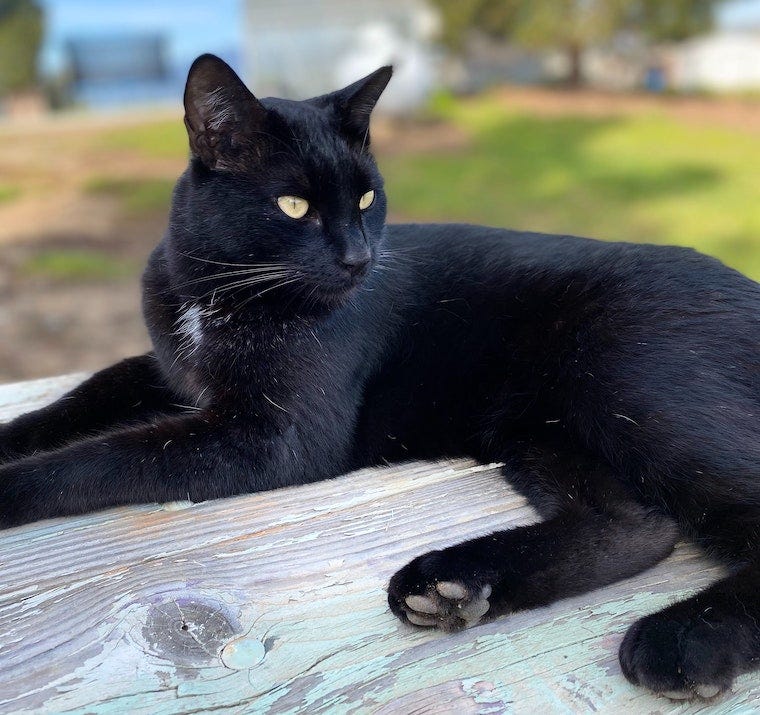 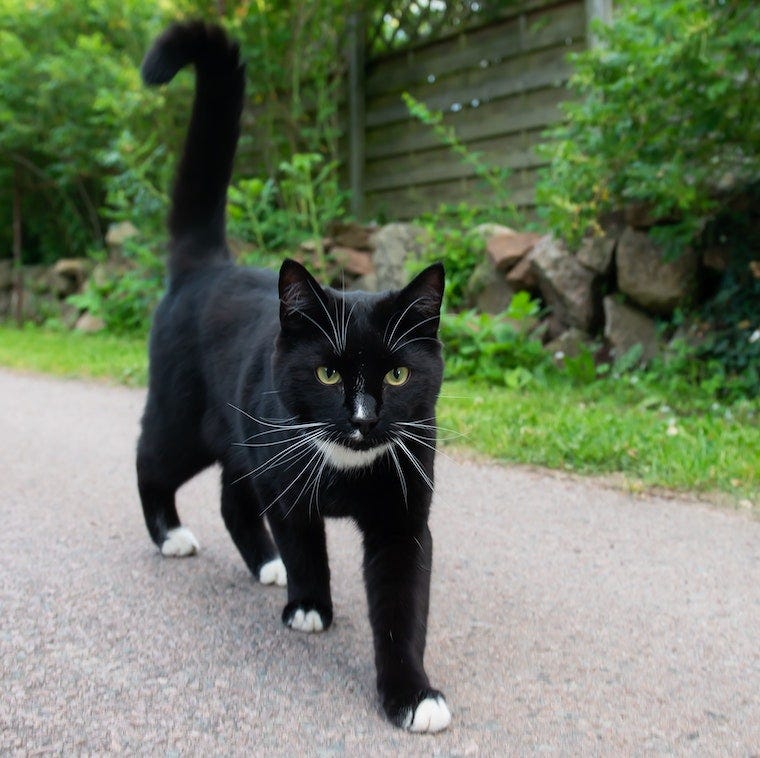 Medium-grade white spotting includes the standard bicolor—equal ratio of white to color—and the “mask-and-mantle” pattern where the cat appears to be wearing a colored “mask” and cape, or “mantle.”

High-grade white spotting includes the “cap-and-saddle,” “harlequin,” and “Van” patterns. Cap-and-saddle cats have a small “cap” of color on the head and small “saddle” of color on the back. Harlequin cats are predominantly white with small, random spots of another color. Finally, Van (as in Turkish Van!) refers to color that is limited to the head (usually between the ears) and the tail only—everywhere else is white. 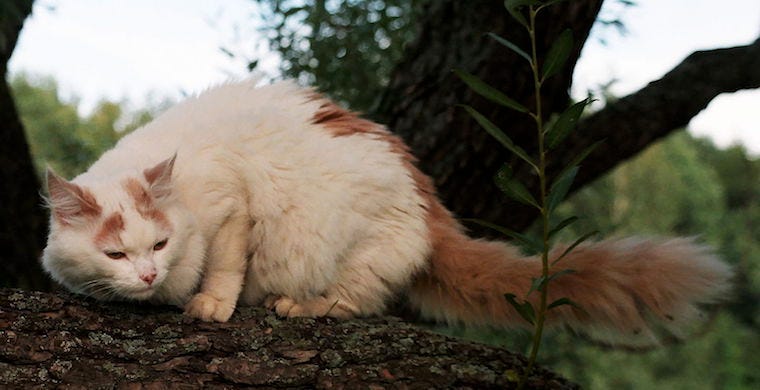 The coat doesn’t affect their gender

Speaking of male-dominated attire, you might be wondering if tuxedo cats tend to be more male or female. As opposed to calico and tortie cats—whose genetic makeup impact both coat pattern and gender (resulting in calicos and torties being 99.9% female)—tuxedo cats are not impacted by the genetic information that decides their coat colors.

In other words, there are an equal number of male and female tuxedo cats out there. A tuxedo cat can be born even if neither parent is tuxedo. He or she simply needs to inherit the black and white genes!

An anecdotal study showed that black-and-white and grey-and-white cats may be more likely to show aggression when handled at home and during vet visits. However, a cat’s personality is much more likely to be shaped by their upbringing and, to a lesser extent, their breed.

For example, the Turkish Van, a well-known bicolor cat, is considered social and affectionate when properly socialized during kittenhood.

When it comes to tuxedo cat names, the possibilities are endless! A few of our favorites include names related to their appearance as well as tuxedo cats from pop culture.

A tuxedo cat is also known as a Felix cat, one of the many signs that these kitties are entrenched in popular culture. Heck, a bunch of our favorite TV cartoon cats are tuxedo—including the aforementioned Felix the Cat, Sylvester of Looney Tunes, and Tom of The Tom and Jerry Show. There’s also the Cat in the Hat of Dr. Seuss, Mr. Mistoffelees of the Cats broadway show, and many others!

Bicolor cats are popular in video games, too. Some of our favorites include:

And they’ve had many famous owners

It is said that William Shakespeare, Ludwig van Beethoven, and Sir Isaac Newton all had tuxedo cats. (Okay, so there’s no proof.)

One famous world leader who conclusively owned a tuxedo cat? President Bill Clinton—or his daughter Chelsea, to be more precise. Chelsea’s tuxedo cat named Socks was an adopted stray kitty. He served as the First Cat of the United States between 1993 and 2001.

And finally: It’s not exactly accurate to call the ancient Egyptians famous “owners” of tuxedo cats, because no one could own cats as far as this group was concerned. In fact, cats were considered deities in ancient Egypt as far back as 3200 BC. And believe it or not, 70% of the cats depicted in Egyptian art were tuxedo cats!

The richest cat in the world… for a little while

A tuxedo cat named Sparky previously held the honor of world’s richest cat. In 1998, Sparky’s owner passed away and left him $6.3 million. Not too shabby! Alas, even wealthier cats came along in recent years. (Tommaso, for instance, is a black cat that lives in Italy and inherited a whopping $13 million.)

Last but not least: magical powers?

We had to have a little fun with this last tuxedo cat “fact.” Apparently during a vernal or autumnal equinox, tuxedo cats become invisible due to the colors of their coats. While this doesn’t make a whole lot of sense, we appreciate the lore!

Tuxedo cats and other bicolor cats are relatively common. The rarest bicolor pattern is cream and white.

What breed of cat is a tuxedo cat?

Although there is no such thing as a tuxedo cat breed, the bicolor pattern arises more often in the following cat breeds: Domestic Shorthair, Turkish Van, American Shorthair, British Shorthair, Maine Coon, and Manx.

A cat’s personality is much more likely to be shaped by their upbringing and breed than their coat pattern. One anecdotal study shows that tuxedo cats may be more aggressive than other cats when handled or at the vet.

You’ll typically find tuxedo coat patterns in common domestic shorthair cats. Domestic shorthairs are non-pedigreed and available for adoption, so they are not considered expensive.