The Maine Coon cat is a natural large cat breed that hails from New England but has won the hearts of many people all over the world.

The origin of this popular cat breed is shrouded in mystery. Many believe the Maine Coon most likely developed after a domestic shorthair cat bred with a long-haired cat from Europe. Others speculate that they originated from the Norwegian Forest cat.

These cats grab your attention with their size. They are already considered a large breed, but their long fur makes them seem even bigger. The Maine Coon cat has a great temperament, and is very sociable and intelligent. This larger-than-life cat makes an awesome family pet.

We’re going to discuss the history, size, and personality of the Maine Coon cat... right meow. 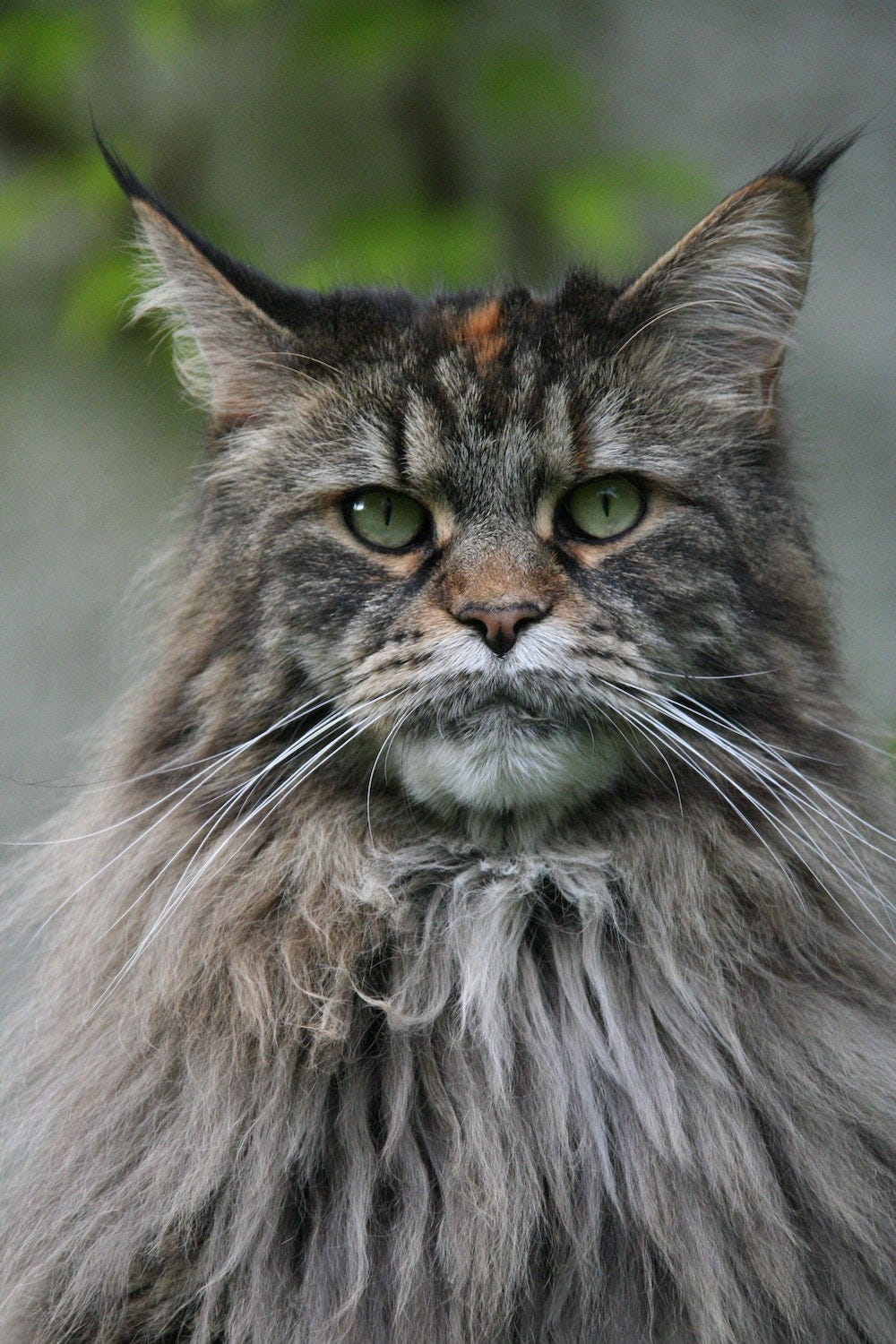 The Maine Coon's size and temperament has gained them the nickname of “gentle giants.” They get compared to dogs more than they do to other cats!

Maine Coons may appear larger than they actually weigh—but their weight is nothing to scoff at. Male Maine Coon cats can weigh up to 25 pounds and females up to 18 pounds. A typical weight range for Maine Coons is 10-18 pounds.

Nutrition and exercise patterns will influence a Maine Coon cat’s weight. The Maine Coon can be very active and loves to play, but they are a big fan of lounging around (aren’t we all?). Too much lounging, and you risk a little too much weight gain.

If you’re looking for a big cat, you certainly will find one in a Maine Coon. They are a force to be reckoned with and will have you doing a double-take: Is that a lynx waltzing through your living room?

The Maine Coon’s coat is luscious and soft, thick and protective, and made to survive the cold winters of New England. While many Maine Coons are brown tabbies, the coloring and patterns of their shaggy coats range widely, including solid, tortoiseshell, bicolor, and more. Most patterns and colors are recognized by cat fanciers, with the exception of pointed patterns or the colors lavender and chocolate.

Their long, shaggy coats keep their bodies warm. A fluffy ruff accents their chests, and their large feet resemble snowshoes (and we mean this as a compliment). And while the coat is thick and heavy, matting is minimal with a regular combing (and cuddle) session.

When the Maine Coon cat is properly cared for and given the best chance to thrive, they can live up to 15 years. This is why nutrition and exercise are essential.

You’ll want to make sure that your Maine Coon is at a healthy weight and getting enough exercise to maintain optimal health. And try not to overdo it on the calories—no matter how many adorable poses they strike in the hopes of treats! 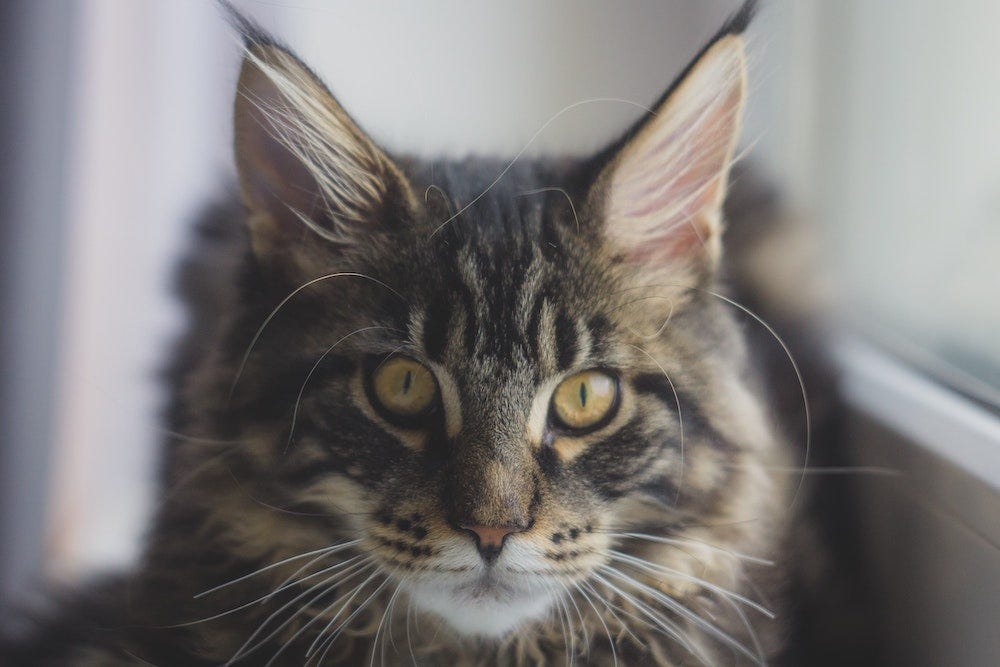 Not all cat breeds are considered a natural breed—today, many of the most popular breeds are man-made. That’s not the case with the Maine Coon cat. The Maine Coon developed more than a century ago (perhaps as early as the 1600s) in the wilderness of Maine; in fact, they are the official state cat of Maine.

The Maine Coon cat probably came from an encounter between a domesticated American Shorthair cat and a long-haired cat from overseas. They adapted to the cold winters and survived to become the lovable cats we know today.

No one is exactly sure where the Maine Coon cat originated from, and it’s likely that you have heard a few different myths about their origins:

As magical and mysterious as all of these stories are, they are unfortunately not true.

When the Maine Coon cat was established in the late 1800s, they soon became useful as working cats that kept rats and mice out of barns. Of course, there was the occasional exception: A tabby Maine Coon named Cosey won “Best Cat” at New York’s Madison Square Garden’s 1895 cat show. (However, for the official record, every cat is the Best Cat Ever!)

These cats were useful yet also loyal and friendly, which would lead to the appeal of keeping them as pets later on. Maine Coons realized just how valuable having humans around could be. What’s better than meals you don't have to work for, clean water, and a comfy couch?

When most people think Maine Coon cat, they think “big.” And they’re not wrong.

The Maine Coon is a large cat with long fur that makes them appear even bigger. They are also affectionate and loyal to their families. You can feel confident having your children or other pets around your Maine Coon, because they are highly adaptable and easygoing.

The Maine Coon has a long bushy tail, long legs, and strong features. They're often polydactyl, meaning they have extra toes on their paws. No wonder they’re considered impressive hunters! 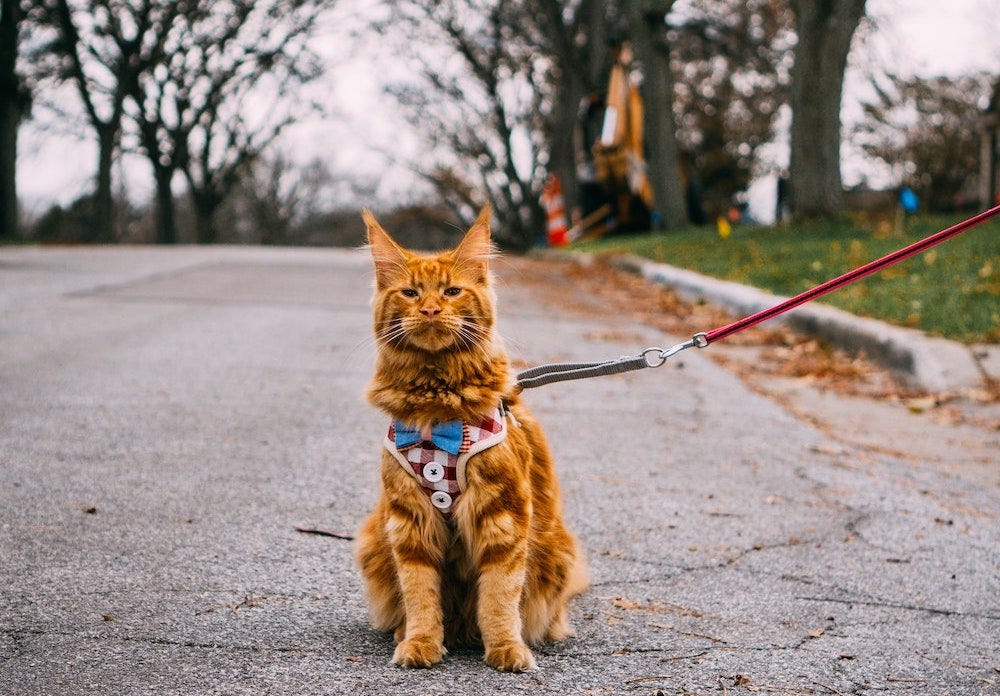 The Maine Coon cat is playful, adaptable, and independent. If they want to cuddle, they will curl up next to you. Otherwise, they’ll want to be in the same room with you without demanding your attention.

However, this cat is known for being vocal. If you hear chirping or a cute trill, it’s not a bird. It’s a cat!

You'll want to keep your Maine Coon cat entertained because they have the energy to burn. Having plenty of cat toys, cat trees, and places to perch will allow your Maine Coon to enjoy their time and spend some energy. If you are looking to spice up how you help your cat exercise, consider walking your Maine Coon on a leash! This is a great way to let your cat explore the outdoor world safely and get proper exercise.

Typically, a male Maine Coon cat will be more outgoing than a female. They are more motivated to impress their humans and like being the center of attention. Female Maine Coons are just as fun and loving, but they take more time to warm up to the people before showing their true selves.

If you have any vermin in your house, the Maine Coon will be sure to sniff them out. They are excellent hunters, which comes from their history of being barn cats, and like to be given tasks or learn new tricks. Overall, the Maine Coon is an exceptionally behaved cat that is friendly, attentive, and accepting.

Caring for a Maine Coon 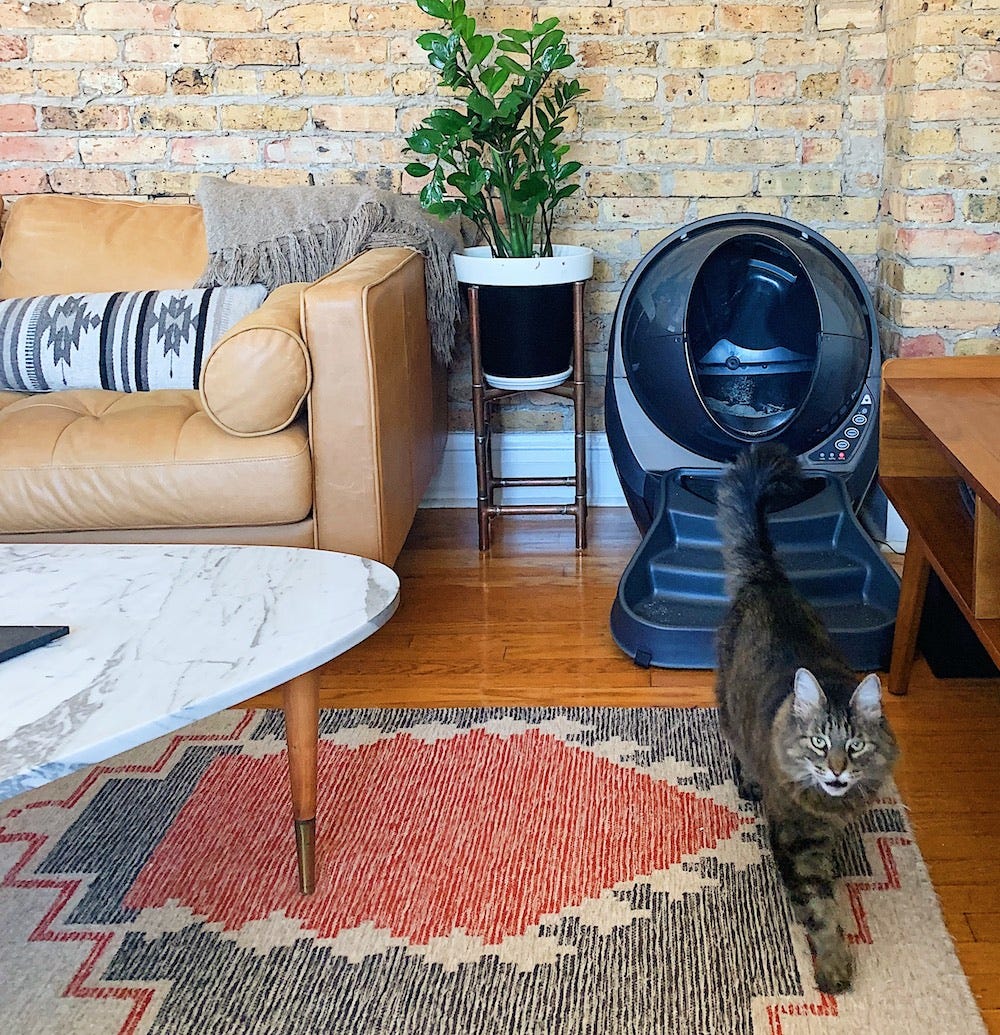 As easygoing as a Maine Coon is, taking care of one still requires some work. Because their fur is long and thick, they need to be groomed regularly. Their fur can become tangled or matted, but overall it is easy to maintain.

Access to a clean litter box is an important part of your cat’s physical and behavioral health. Cat’s don’t like to use a dirty litter box, but we know that pet parents aren’t always around to scoop immediately. This is why the automatic, self-cleaning litter box like Litter-Robot comes in handy. Your cat will feel fresh and clean every time they enter the litter box, and you never have to scoop!

The Maine Coon cat is a generally healthy breed. Yet, due to their large size, they can be prone to particular medical problems. They can develop hip dysplasia (causing pain and lameness) and heart disease like hypertrophic cardiomyopathy (HCM). They may also be prone to spinal muscular atrophy.

With yearly vet check-ups, you can ensure your Maine Coon is healthy and feeling like their best self. Of course, if you notice anything unusual with your pet, you should contact your veterinarian as soon as possible.

If you are looking to bring home a Main Coon kitten or cat, be prepared to share your house with a very large feline. You won’t lose this cat easily, but you will notice the influx of happiness that comes with letting them into your life. 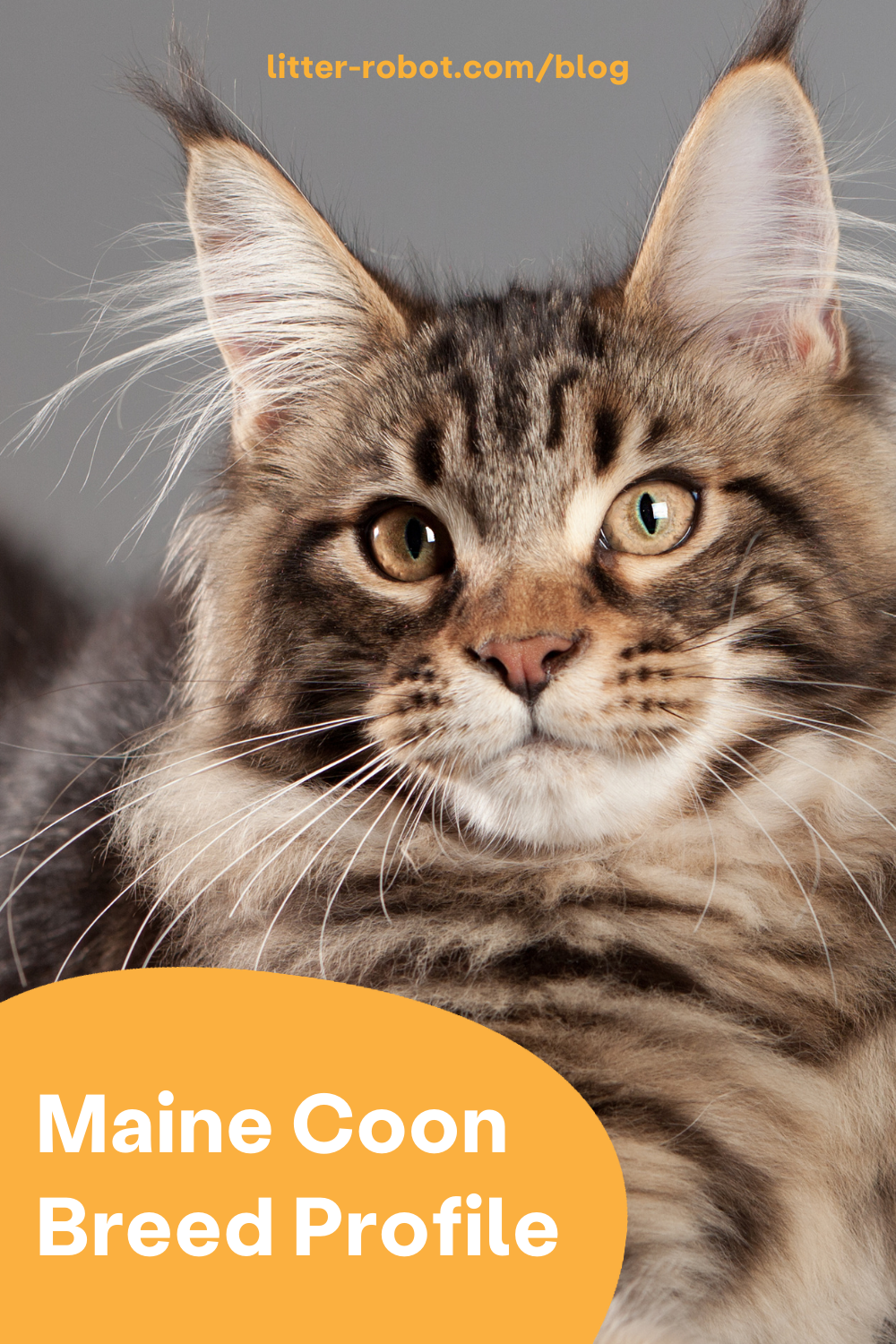