Why Are Black Cats Associated with Halloween?

Every year as summer transitions into autumn, a slew of fun and ghoulish Halloween imagery inevitably pops up in stores, on front porches, and across your newsfeed. Jack-o’-lanterns flash their toothy grins, skeletons greet us with open bones, and black cats hiss from shadowy corners. However, the presence of this latter “decoration” got us wondering: How did black cats become such prevalent Halloween symbols?

Unfortunately, the answer involves a lot of dark history.

Prior to the 4th century, cats were held in positive regard around the world. The ancient Egyptians downright revered cats, worshiping and devoting entire cities to feline deities that protected their people from loathsome creatures like snakes and scorpions. As the Egyptian empire fell to the reign of Christianity, the domestic cat spread rapidly into Europe.

Cats were still heavily associated with goddesses when Roman Emperor Theodosius I banned all pagan worship in 391 CE. For the next few centuries, cats, while no longer allowed to be revered and worshiped, were generally left unscathed.

Samhain: Before Halloween was Halloween

Perhaps the most direct connection between black cats and contemporary Halloween symbols stems from the Celtic festival Samhain. Samhain takes place between sunset on October 31 and sunset on November 1 to mark the end of harvest season. In the 9th century, the Western Christian Church shifted the date of All Saints’ Day to November 1. Over time, Samhain and All Saints’ Day merged to create the modern Halloween.

On Samhain, it was believed that the Cat Sìth—a Celtic fairy creature that was said to resemble a large black cat with a white spot on its chest—would bless any house that left a saucer of milk out for it to drink. Likewise, the Cat Sìth cursed those houses that did not leave out a saucer of milk. The association of cats with Samhain likely also carried over into Halloween. 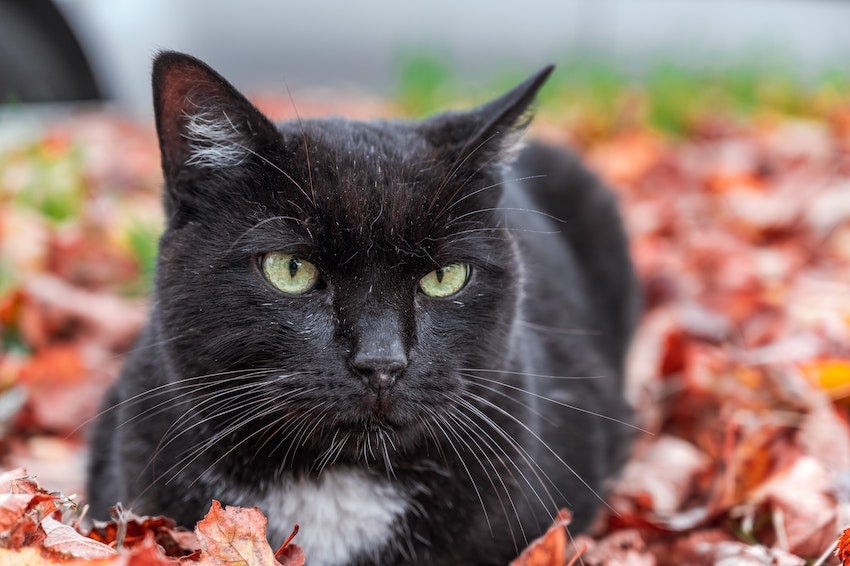 Things really went downhill for cats—and black cats in particular—in the Middle Ages. It isn’t clear if black cats were already well-established bad luck omens in Europe by the 13th century… But after Pope Gregory IX published Vox in Rama on June 13, 1233, black cats were forever stained with superstition.

Vox in Rama was a papal decree condemning a German heresy known as Luciferian, a form of devil worship. One of the “devils” this satanic cult was said to worship took the form of a diabolical black cat. Pope Gregory IX declared cats to be “the devil’s servants.”

As the Cat Connection reports, Vox in Rama was “the beginning of the wholesale persecution of felines in continental Europe, resulting in the deaths of millions of cats over the next 300 years.”

The Church’s official condemnation of black cats led to their association with another one of the most prevalent Halloween symbols: the witch. In 1484, Pope Innocent VIII declared that the cat was the “devil’s favorite animal and idol of all witches.”

All cats seen in the company of women were considered their familiars—or supernatural entities that assisted or acted as a vessel for the witch—and both were to be burned. Ironically, as French feminist author Mona Chollet notes, these cats’ extermination contributed to the growth of the rat population, aggravating subsequent outbreaks of disease (which were blamed on witches).

A cat’s very nature—independent, indifferent, and often nocturnal—lent itself toward the belief that felines were indeed witches’ familiars, among other strange superstitions. Numerous recorded witch trials from the 16th and 17th centuries provide witness statements about cats (quite often black cats) doing the bidding of and “consorting with” the woman who was standing accused of witchcraft. 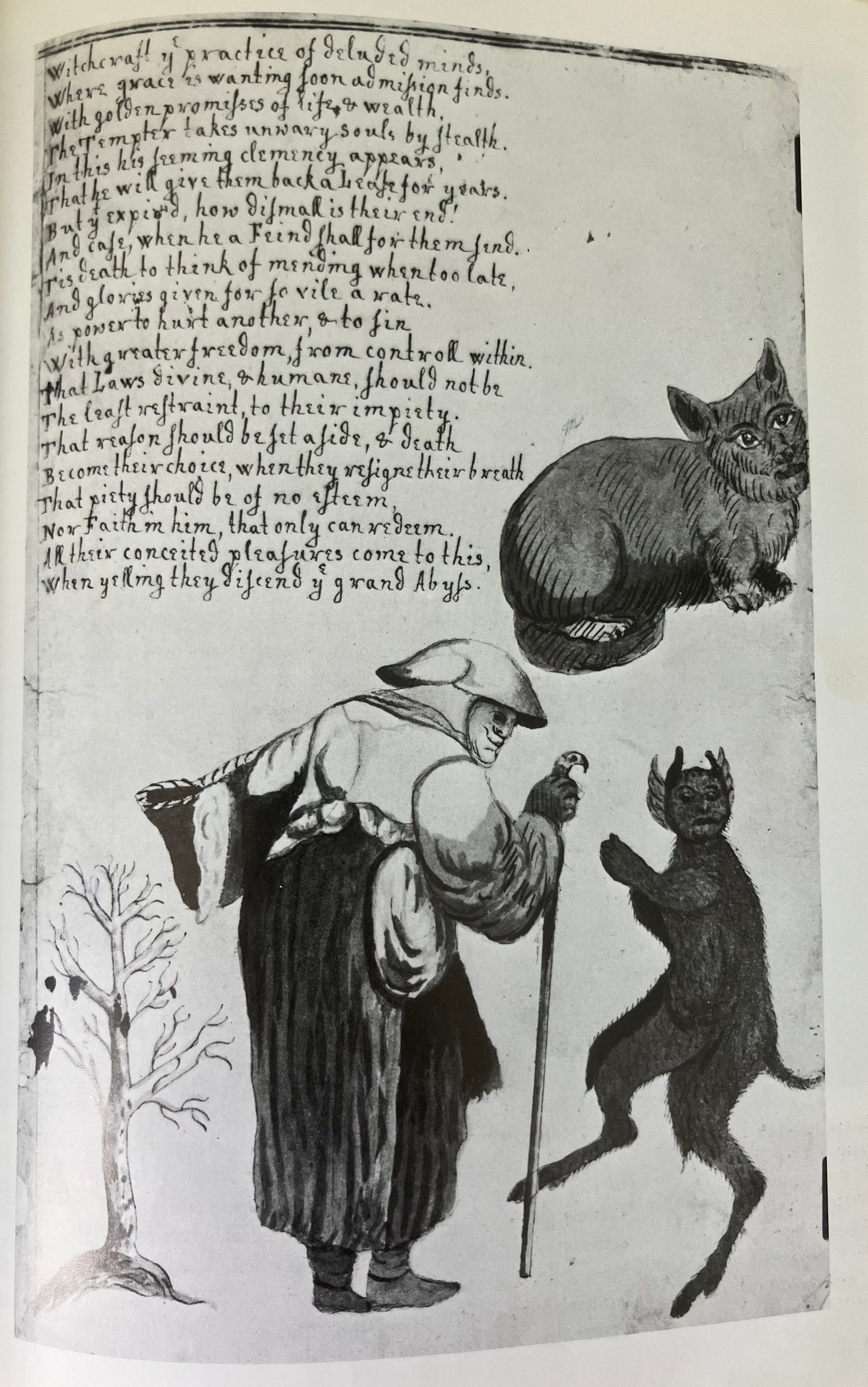 Black cats in America never stood a chance. Their persecution arrived on the shores of New England with the first settlers. S.E. Schlosser at American Folklore says,

In the 1500s, there arose the belief that witches could shape-shift themselves into the form of black cats so they could roam freely about the country [wreaking] havoc and spying on people… The belief that witches could turn themselves into black cats crossed the Atlantic with the first American settlers and was a firmly-held superstition in New England by the time of the Salem witch hunts.

So strong was the belief that felines consorted with witches that Puritans began the practice of burning black cats on the Shrove, or Fat Tuesday, before Lent to protect their homes from fire.

As puritanical zealotry waned and the 18th century progressed, the feline reputation finally saw a turn for the better. By the 19th century, society no longer solely regarded cats as deceitful creatures. They had instead become symbols of mystery in literature and poetry. In 1843, Edgar Allen Poe published his short story “The Black Cat” to immediate acclaim.

In many respects, though, mistrust toward black cats persisted. Sometimes this was to their benefit: In 1893, activist Matilda Joslyn Gage remarked that there was a “substantially lower market value” for black cats’ fur.

The 20th century saw cats as cherished pets, though the arts continued to darkly portray black cats. Beginning in the 1930s, black cats often appeared as integral roles in horror films. Around the time of World War II, black cats became firmly established Halloween symbols—but now as good luck! Trick-or-treating had become a holiday tradition, and the presence of a black cat at your door protected your home from evil spirits that might come knocking. 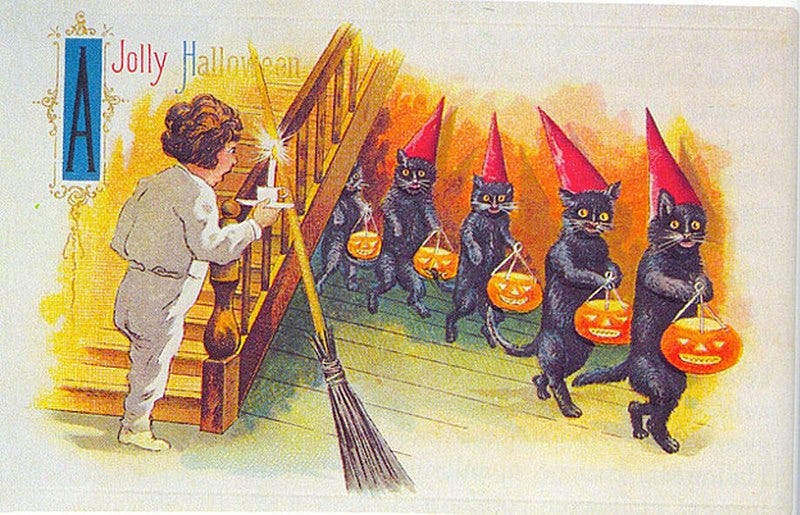 Halloween postcard between circa 1900 and circa 1916

Unfortunately, a stigma against black cats remains to this day. Whether because of or in spite of the prevalence of Halloween symbols, black cats often spend a longer time in shelters waiting for adoption. Cat parents and members of the animal rescue community must continue to advocate for our dark-furred felines (and canines!). These animals have endured centuries of bad reputation, but cat parents who have had the privilege of bringing one into their homes can attest: Black cats bring nothing but good luck!

This Halloween, keep your black cat indoors where they’re safe, warm, and loved. 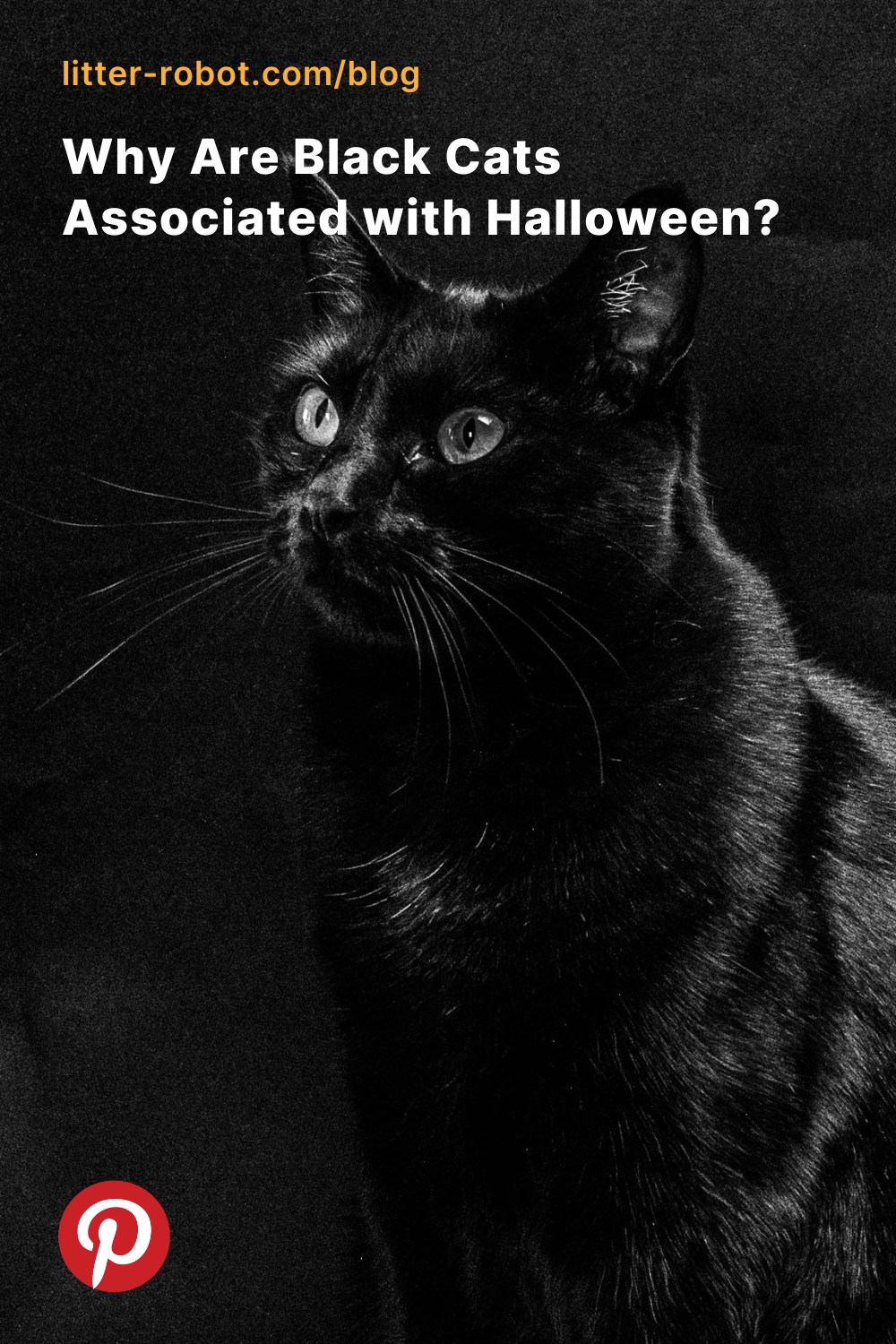