The Turkish Van, also known as the “Swimming Cat”, is one of the rarest and most beautiful cats you could encounter. They are an ancient breed that has been around for centuries, amusing their humans with their love of water and playful antics. Not only are they highly regarded in their home country of Turkey, they are well-loved around the world.

You won’t often come across a Turkish Van cat, but the day you do will be hard to forget. If you’ve already interacted with one, you know full well how magnificent this breed is, and are likely interested in adopting one.

Overview of the Turkish Van 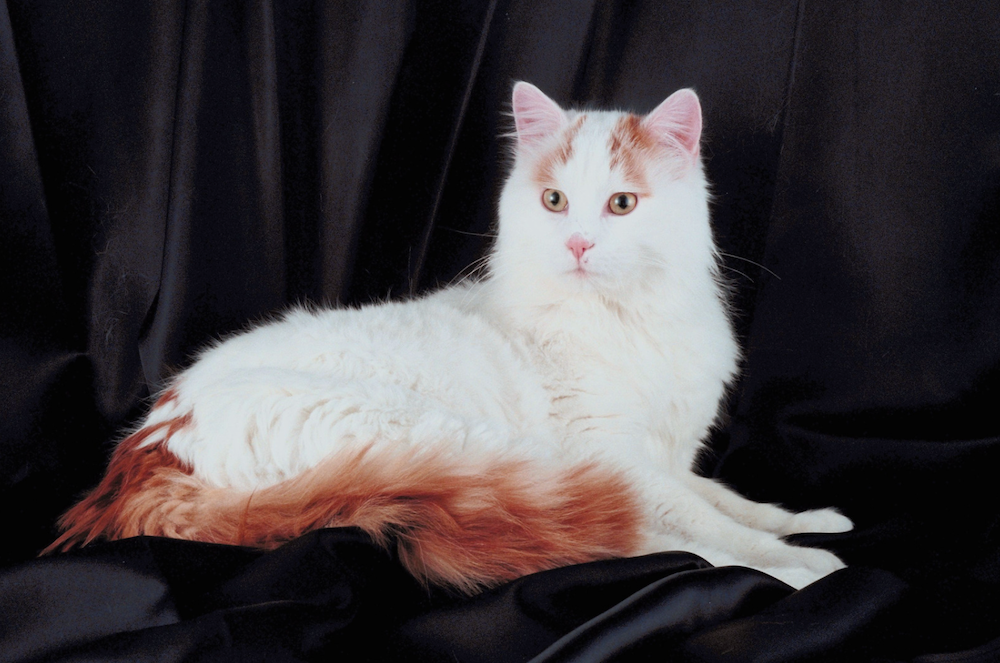 Turkish Vans are known for their distinct coat and colored markings, their strong and sturdy build, and their energetic personalities. These cats will keep you company and entertain you while doing so, but they might want you to be at least partially involved. They are also one of the few cat breeds that have a love of water, so don’t be surprised to find them lingering around bathtubs!

Turkish Vans typically weigh as little as 7 pounds and up to a whopping 20 pounds, with males being slightly larger than females. Most of their weight comes from their athletic build, which sports strong muscles that help propel them forward and upward. Turkish Van cats don’t reach full maturity until 3 to 5 years of age.

These cats are fairly active, which means they know how to maintain their body weight well on their own. Keeping your Turkish Van occupied is an ideal way to aid in their health.

Turkish Vans are heavy and strong; they’re known as one of the longer cat breeds. This semi-longhair cat can reach up to 36 inches (yes—3 feet long!) from the tip of their tail to their adorable little nose. This only adds to their show-stopping presence. 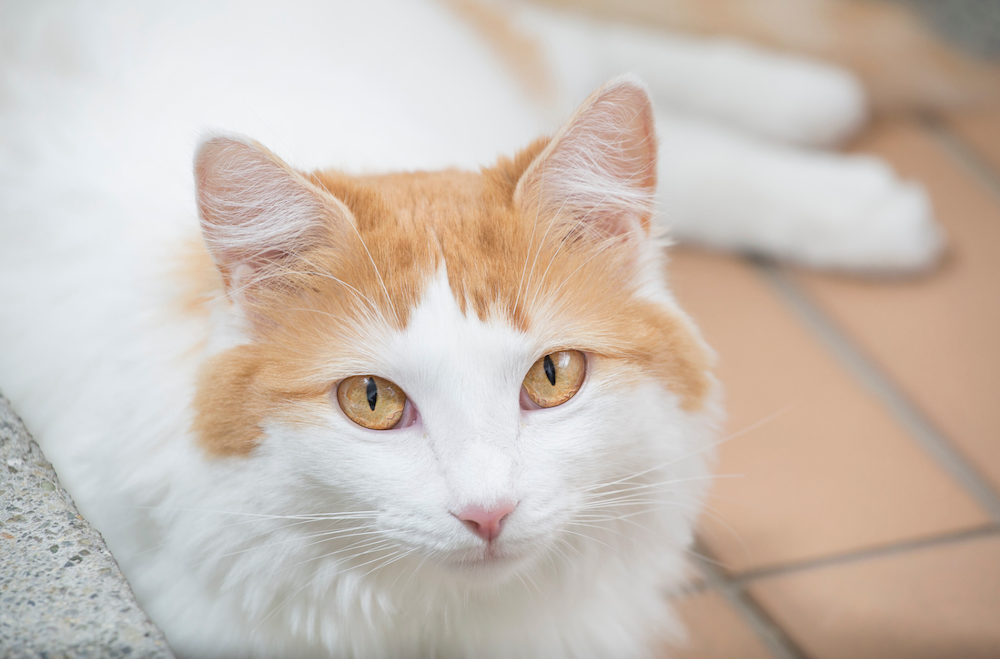 Turkish Van coats are what really sets them apart from other cats. As a result of the piebald gene, the Turkish Van’s coloration can vary from red to black, tortoiseshell, cream, blue, or tabby, with large white spots that cover their body. They are best known for their white and red (orange) or cream appearance.

Many people assume a Turkish Van is all white with spots of color. Rather, they are bicolor, with one color and one large spot of white that covers much of the body. (Even more striking is when this cat has one blue and one amber eye.)

This is called the Van pattern: an all-white body with coloring on the face or tail. This pattern manifests in rings on the tail or a “thumbprint” marking on the shoulder. In folklore it is described as a symbol of God’s approval, which is probably why this cat breed is associated with the story of Noah’s Ark.

Their coat length is semi-long; it is a single coat with no undercoat, making their fur extremely soft and fluffy, which feels like cashmere. Turkish Vans appear silky because of how fine their coats are—the perfect fur to run your fingers through.

Turkish Vans are not prone to specific health conditions, which means they’re typically healthy, enduring cats. Their average lifespan ranges from 12 to 17 years.

If you provide your Turkish Van with a life filled with good food, love, enrichment toys, and exercise, they can be content, long-lasting companions.

History of the Turkish Van 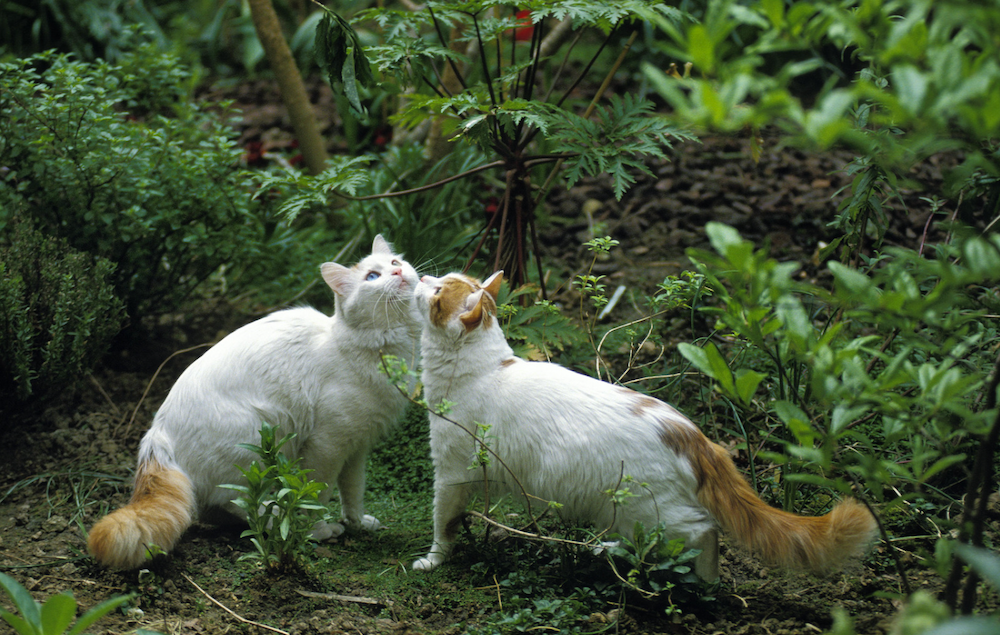 The Turkish Van cat is regarded highly in their home country of Turkey, particularly in the Lake Van area for which they were named. They are a naturally occurring breed that has been around for centuries. Knowing this, it’s understandable that they would be a cherished and well-respected cat breed.

They’ve lived in close proximity to their feline cousin, the Turkish Angora, for centuries. However, they are genetically not the same cat, their main differences being size and coat coloration. Turkish Angora cats are typically smaller, fully white cats, while Turkish Vans are larger bicolor cats.

The first Turkish Vans to leave their home region were brought to Britain in the 1950s, a female and male pair. They arrived with Laura Lushington and Sonia Halliday, two travel writers, who were given these kittens as their trip ended. This is a rare occurrence; Turkish Vans are difficult to export outside of their homeland due to their treasured status.

These two cats were mated by British breeders, and were well received. The breed then made its way to the United States in the late 1970s and began to receive club recognition. The International Cat Association (TICA) and The Cat Fanciers' Association (CFA) recognized this cat in 1979 and 1994, respectively.

To this day, the Turkish Van isn’t a popular breed, but only because their presence is rare. If you are able to meet one of these kitties, consider yourself very lucky.

Turkish Vans are medium- to large-sized cats with semi-long hair and a strong build. They are intelligent and independent, but still enjoy spending time with their humans. They don’t mind being the center of attention.

They can have amber or blue eyes—or sometimes one of each, which stands out against their mainly white bodies. Their cashmere-like coats can range in colors but will usually produce close to fully white cats. They have long, silky fur that only adds to their elegance. 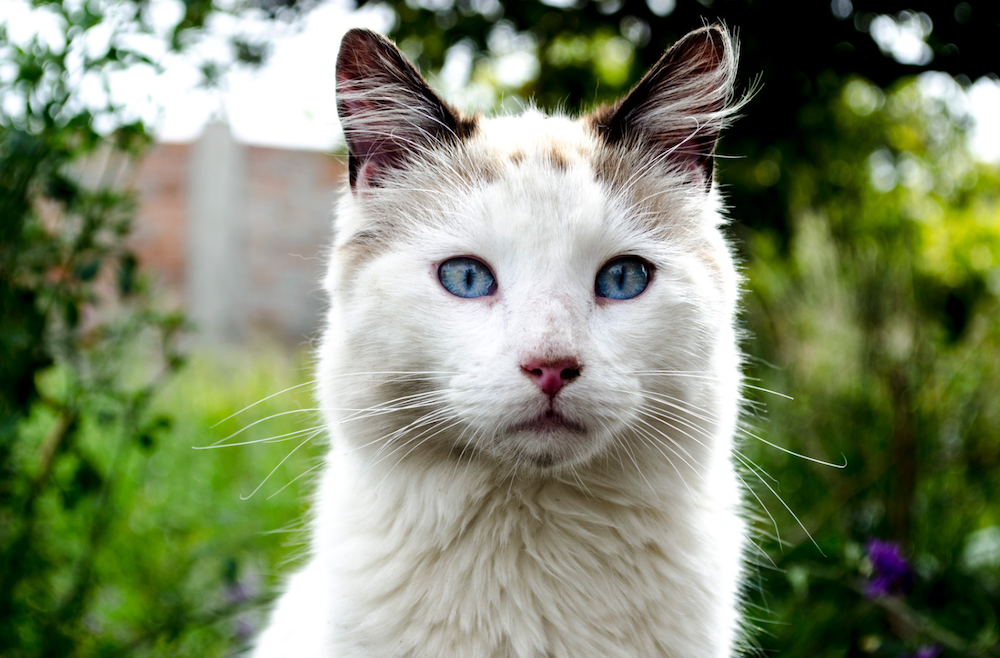 Turkish Vans are known to be friendly and outgoing, which can make for a charming feline companion. They are relatively even-tempered and get along well with most people, older children, and other animals. This means they would be happy to share a home with another cat or even a dog, as long as they are introduced properly.

When living with children, it’s best to keep their interactions well-supervised. Turkish Vans are fun-loving, but they won’t tolerate pulling on their tails or being picked up or jostled constantly. If a child can recognize your cat’s boundaries, there should be no problems with the two of them getting along.

Turkish Vans are highly energetic, so they will need a bit of exercise. They are also somewhat needy cats that will require consistent attention from humans. If you are a busy person who doesn’t spend much time at home, your Turkish Van might get bored and lonely. While another kitty friend might help, you may want to reconsider your cat breed options.

These cats will launch themselves into the air, catching toys mid-flight and bouncing from one surface to the next. (They’re agile but can also be clumsy.) They will initiate play with you, wanting you to be involved. Additionally, they love interactive toys and games that occupy their minds and help with mental enrichment. They are truly a national treasure!

If you are active and playful, the Turkish Van will match your energy effortlessly. And while they don’t love to be picked up, they sometimes see themselves as lap cats and might seek you out for a nice cuddle.

Caring for a Turkish Van 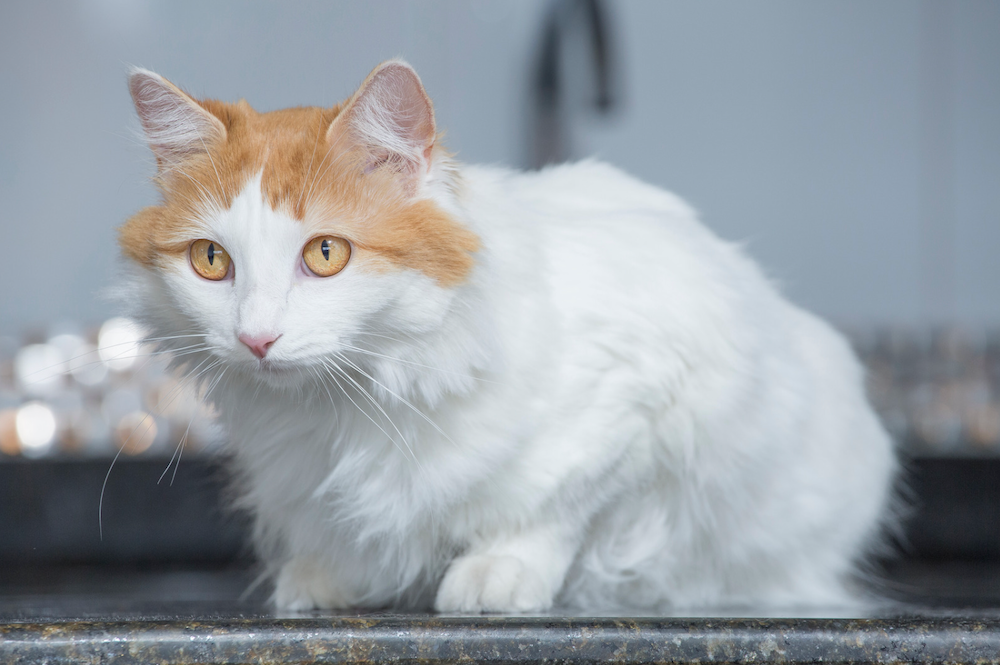 There aren’t too many struggles that come with caring for a Turkish Van. They are healthy, happy, and active cats that are looking for a family to fit into. They might become attached to one specific family member over others, so don’t be surprised when you are the one who needs to fulfill all of your cat’s needs.

Grooming your Turkish Van and keeping them gorgeous won’t be difficult. Because they are single-coated, their fur tends to knot and mat less than other cat breeds. Turkish Vans are seasonal shedders, which means that they usually only shed after the winter months.

During the winter, their coat becomes thicker to retain more warmth. As the weather warms up, their coat will shed. Be prepared in the springtime to vacuum and assist in grooming your Turkish Van.

If you try to give your Turkish Van a bath, don’t be surprised when their coats are difficult to fully wash. Their coats are naturally water-resistant, so bathing this cat might take a bit longer than expected. Couple their water-resistant coat and passion for H₂O, and it’s no surprise that this cat’s nickname is “the Swimming Cat.”

Make sure to trim their nails at least monthly so they don’t become overgrown. Like any cat, Turkish Vans also prefer to live in clean conditions, so having a self-cleaning litter box like Litter-Robot can assist you with the upkeep that your cat might require.

Turkish Vans aren’t known to have genetic issues that plague them in their adult life. Keeping them active, well-fed, and loved can do wonders for their health.

These cats are relatively healthy, but taking them to yearly veterinary check-ups is essential.

If you’re now even more in love with the idea of the Turkish Van, know that adopting one may be tricky. As mentioned earlier, this breed is rarely exported outside their homeland. However, if you are able to adopt this cat, they will bring pure joy to your life.