Why Do Cats Hiss? The Curious Link Between Cats and Snakes

Those of us at Litter-Robot don’t normally pay as much attention to cold-blooded vertebrates as we do four-legged furry mammals. But because October 21 is Reptile Awareness Day, we started thinking about the odd parallels between cats and one quintessential reptile in particular: snakes. Without further ado, let’s take a look at the curious links between cats and snakes, starting with: Why do cats hiss?

Many animals hiss—but chances are, the first two hissy animals you think of are cats and snakes. Snakes have an organ in the throat called the glottis that they breathe through. Normally this is a quiet process, but by forcibly expelling air from the glottis, the telltale hissing sound emerges. Snakes hiss as a defensive tactic—one that is especially useful for small, non-venomous snakes. A hissing snake can give the impression of a larger, more dangerous foe.

So why do cats hiss? Believe it or not, cats are actually imitating snakes when they hiss! Snakes are seen as some of the most fearsome predators in the animal kingdom. Just like snakes, cats hiss to sound intimidating and to try to scare away whatever is threatening them.

Litter-Robot resident veterinarian Dr. Justine Lee explains that by changing the shape of their tongue and pharynx (the tissue right in front of their voice box), cats are able to sharply release a jet of air while spitting some saliva in the process.

Along with hissing, cats may let out a guttural growling sound when feeling especially defensive. Amazingly, certain snake species growl, too—including the King Cobra. (As if they weren’t frightening enough!)

Cats and snakes both bare mesmerizing, if not slightly sinister, vertical-slit pupils. According to research published in the journal Science Advances, vertical pupils are most common among nocturnal predators that ambush their prey. The vertical slits of cats, snakes, crocodiles, and other “ambush specialists” create a greater depth of field and distance judgment than other pupil shapes—which is essential for low-lying predators that kill by pouncing. The slits also allow these animals to see in dim conditions while not being blinded in bright light.

Interestingly, the research also concluded that goats, sheep, and other prey animals bare strange horizontal-shaped pupils to see panoramically on the ground with minimal blind spots, in order to detect approaching predators. Active animal hunters that chase down their prey—such as dogs, wolves, lions, and tigers—have round pupils.

In ancient Egypt, cats were praised and even worshipped for their abilities to kill loathsome creatures—namely snakes. The Egyptian goddesses Bastet and Mafdet were both depicted as feline deities that protected the people against snakes and scorpions. The Egyptian Book of the Dead describes the eternal struggle between the sun god Ra and the Great Serpent Apophis. In the story, Ra journeys across the sky each day, and each evening slips beneath the horizon to enter the underworld. There, embodying the “Great Tomcat” or Mau, Ra confronts and kills the evil snake-demon Apophis, who is darkness and chaos—thereby allowing Ra to return to the world in the morning as the shining sun.

The bubonic plague was often attributed to both cats and snakes—and a great many were destroyed because of it, leaving the real cause of the plague (rats carrying the Oriental flea) able to run rampant.

A Celtic proverb claims that kittens born in May will never catch mice or rats, but will become adult cats that bring snakes indoors.

Finally, it’s been said that to dream of seeing a cat and snake on friendly terms signifies the beginning of an angry struggle. Me-ow!

What if my cat gets bit by a snake?

All superstition aside, what about when cats and snakes meet for real? As we explained earlier when we asked “why do cats hiss?” cats and snakes are generally on the defensive and unlikely to get into a quarrel with each other in the wild.

If, however, you believe your cat may have been bit by a snake, watch out for these symptoms:

Treatment should begin as soon as possible after the bite:

From wondering why do cats hiss to learning about these animals’ ancient history with each other, we’ve discovered that biology and society link cats and snakes in all sorts of curious (and often unfortunate) ways. Please consider that what cats and snakes need most from us humans—truly the most dangerous predator of all—is compassion and care of their natural habitat. 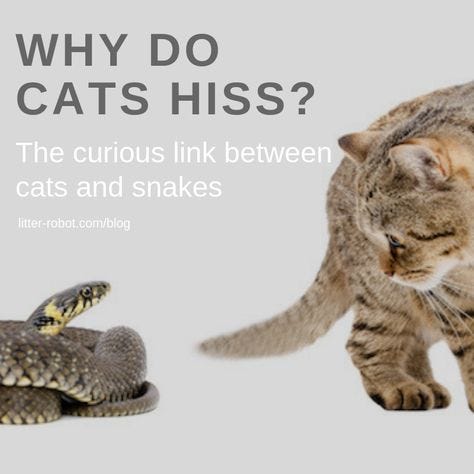