The Devon Rex cat stands out with their physical appearance, including their wavy coat. While you might be drawn to them because of their pixie-like features, you’ll be pleased to learn that they are affectionate and loyal companions. If you are looking for a unique cat that will become your little sidekick, we introduce you to the Devon Rex.

The Devon Rex is a great cat breed to adopt if you aren’t picky about fur color. Obviously, you have chosen a Devon Rex because you are attracted to their look and find them endearing.

Interestingly, coats and patterning vary so much that no Devon Rex looks the same. Of course, you might find a Devon Rex that is similar to your own, but it would be hard for a litter to produce identical kittens.

Keep reading to learn more about the variety of colors and patterns that the Devon Rex can have. 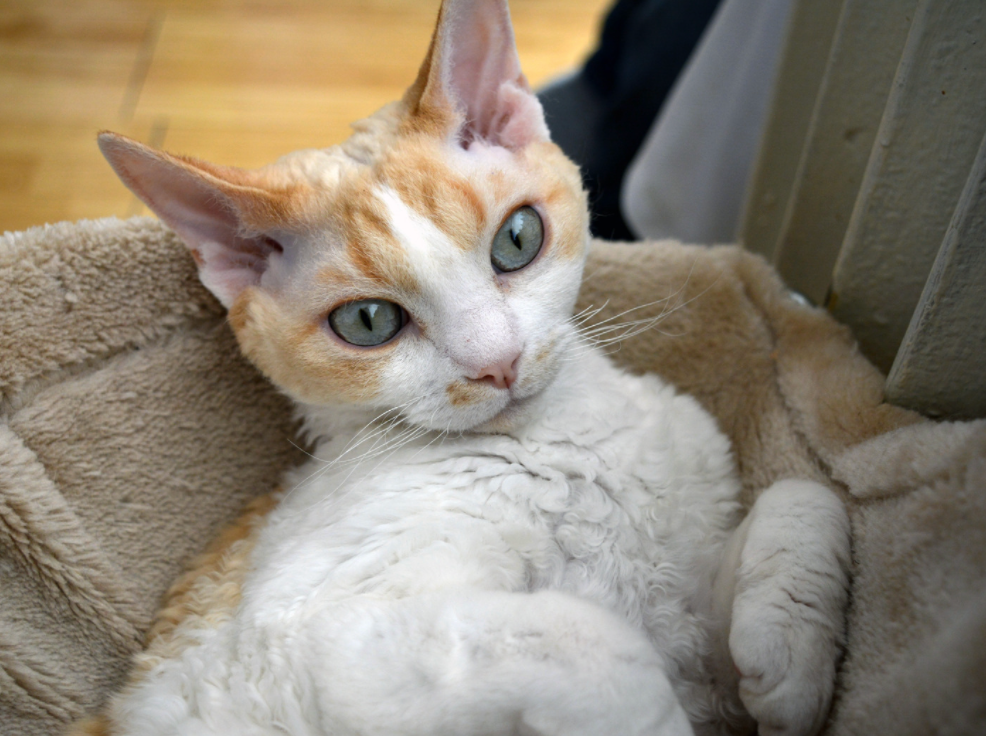 History of the Devon Rex cat

Once the Devon Rex cat was discovered, breeders worked tirelessly to preserve the breed, finding their elfish look adorable and their coats very appealing. There was no cat like the Devon Rex, even though they were first thought to be the Cornish Rex.

In 1960s Devonshire, a woman named Beryl Cox had a calico cat that mated with a wavy-haired feral tomcat. A wavy-haired kitten was created, and Cox was enamored. She realized the curly hair was a recessive gene—both parents needed to have the gene to pass it onto their kittens.

At first, she assumed this litter was a mixed variety of the Cornish Rex, but it quickly became clear that she had, in fact, discovered a whole new breed.

Cox worked with breeders to create the Devon Rex that we love today, which made their introduction into the United States later in the 1960s. There, they were widely accepted and became sought after. Their unique look is bound to draw anyone in.

Devon Rex cats have a remarkably memorable look. From their coat and stature to their facial structure, they are very distinct. They are relatively small, with slender bodies and skinny limbs, but they will surprise you with large ears and alert eyes.

Imagine this: You’re reading a book late at night. You see something move out of the corner of your eye and look up to behold the strange little alien that you have to feed every day. They’ve been watching you for at least 20 minutes with those large, probing eyes. This is a nightly occurrence.

Then when they come crawling up next to you for some evening pets, you are met with wavy fur, unlike that of any other cat you’ve seen. You’re reminded why they are one of the best companions to have—they love their people, cuddling, and making biscuits.

What colors do Devon Rex cats come in?

The colors of a Devon Rex range from solid to patterned, with almost any variation or combination included. There are no colors or patterns that aren’t recognized in the breed, making them as versatile and unique as fingerprints. 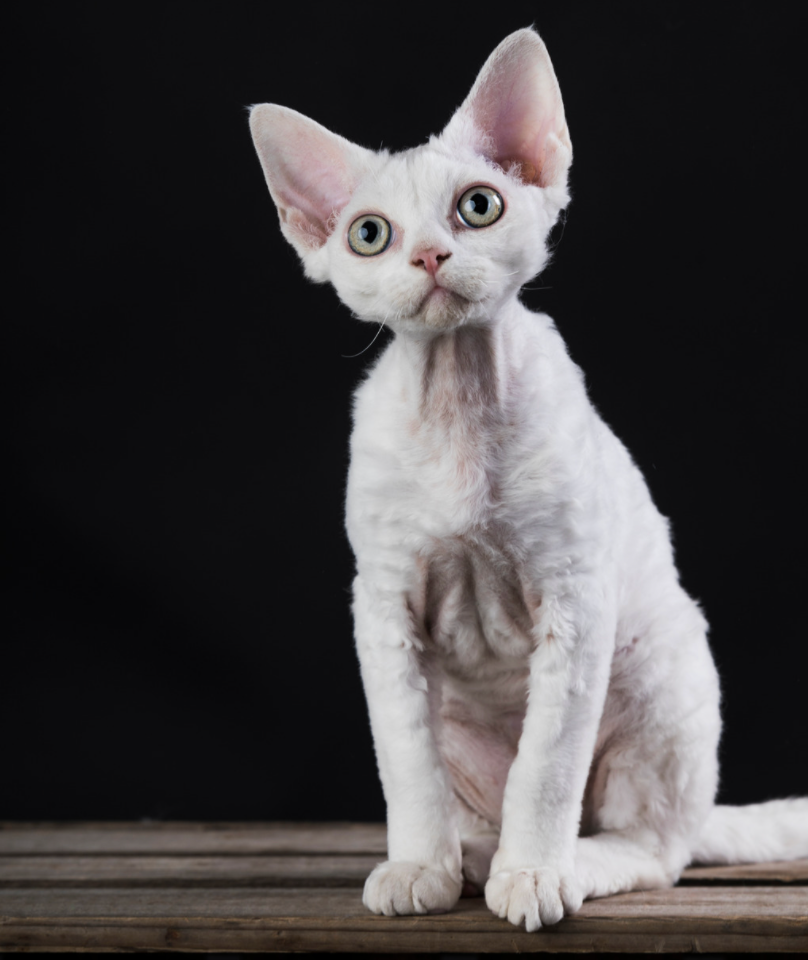 A Devon Rex with a solid coat should be pretty obvious to spot. They will only have one color in their coat, but that color can vary. A Devon Rex could come in solid black, white, grey (blue), or brown.

If your Devon Rex is a cream or reddish color, they probably aren’t fully solid (even though they might appear to be in some lighting). Red and cream Devon Rexes usually have some tabby patterns that can appear as they get older.

Devon Rex cats can also be colors referred to as cinnamon, chocolate, lilac, or lavender. These colors can appear solid but sometimes have markings similar to that of a tabby coat.

Patterned Devon Rex cats are popular and can have stunning differences. You'll never truly guess what a litter will look like, no matter what colors the parents are. 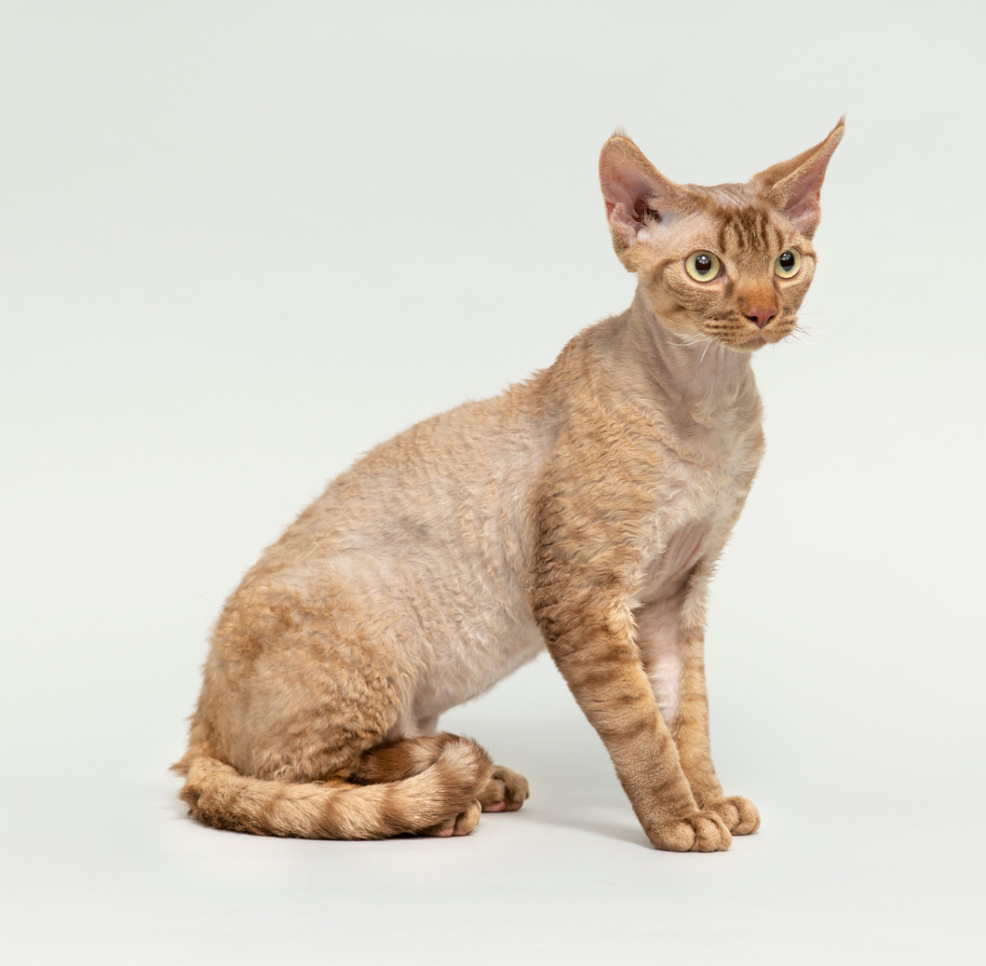 Tabbies can be really any color, so any of the solid hues mentioned above could have a tabby counterpart. Most commonly, you will find brown, red (orange), and cream-colored tabby coats. These can have brown, white, grey, and black mixed into the coloring with different shades.

You might also come across silver tabby Devon Rex cats with a steel-colored base coat with darker black markings.

If you think you have a tabby Devon Rex, go ahead and guess at what pattern they have—curiosity isn’t just for cats! 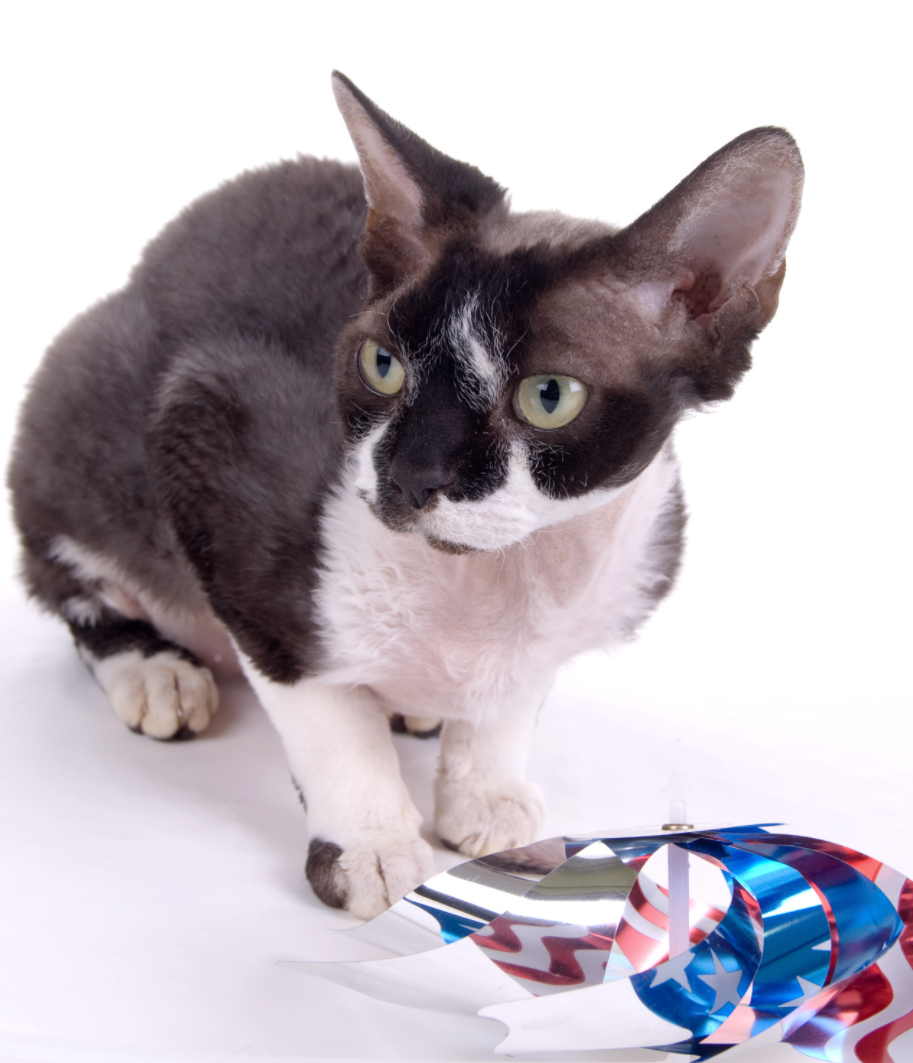 A bicolor Devon Rex will be any color mixed with white and may be distributed evenly so that half of the body is white and half is the other color. You could have a black and white bicolor, grey and white, tabby and white, and more.

Sometimes you even come across a tuxedo Devon Rex, or a solid black coat with white patches on their chest, belly, paws, and sometimes the chin. This cat is always black-tie ready. 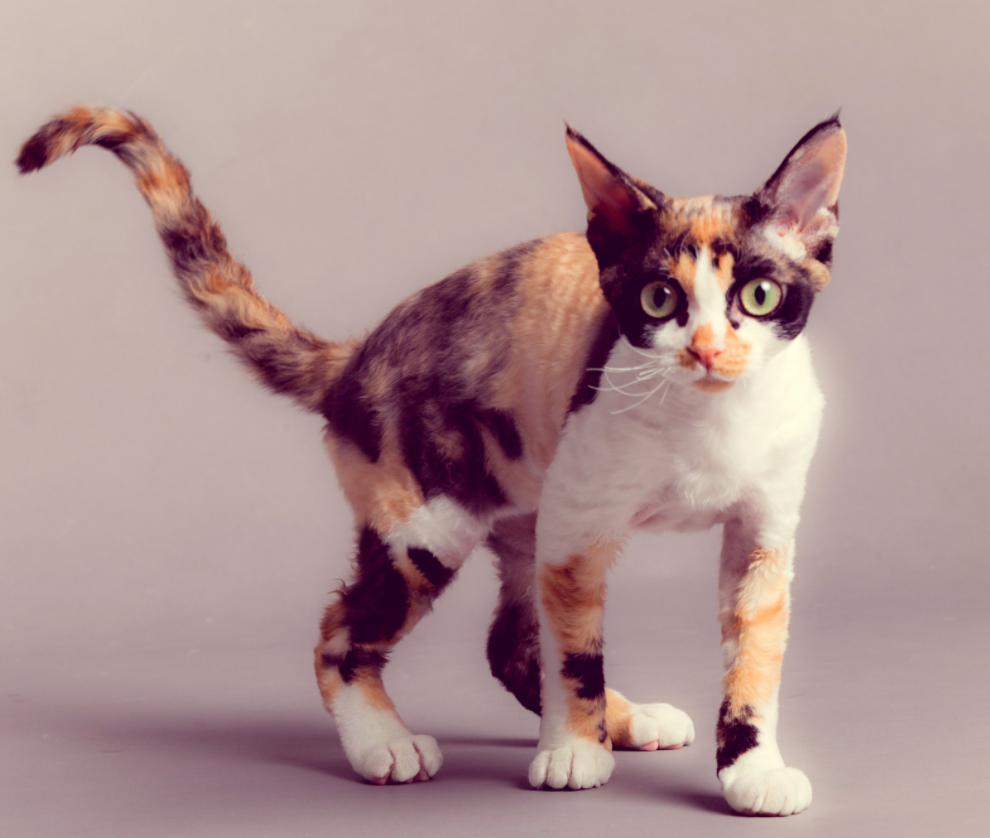 The calico Devon Rex is a tri-color cat that will almost always be a female. The calico gene is only passed through the X chromosome, so it’s very unlikely you’ll find a male calico.

Calicos will usually be white, red (orange), and black. Dilute calicos have slightly duller same base colors so that it looks more like grey, peach, and white. Calicos are easy to spot because the pattern is so distinct and lovely.

A pointed Devon Rex will have a solid-colored body with darker points. This means their face, ears, paws, and ends of tails will be darker than the rest of their body. This coat is adorable on Devon Rex cats and gives them a resemblance to the Siamese cat. Pointed Devon Rexes can be any color.

Tortoiseshell Devon Rex cats are similar to the calico, but instead of having three colors mixed in, they usually display just black and orange. This gives them a pattern that is called “brindle.” Similar to calicos, almost all tortoiseshell Devon Rexes that you come across will be female.

Mink coats are based more on the cat's genetics than a coat pattern type. Mink Devon Rexes will have a variety of different coat features, ranging from solid to pointed to tricolor to tabby. They might have some color on their points, but not always.

Caring for a Devon Rex

As far as grooming, the Devon Rex cat is fairly low maintenance in that their wavy coat (often considered hypoallergenic) hardly sheds. You don’t need to brush your Devon Rex cat, but you may want to gently wipe down their coats weekly.

To aid in their cleanliness, consider using a self-cleaning litter box like Litter-Robot, so that you never have to worry about them using a dirty litter box!

A Devon Rex is a wonderful pet with a one-of-a-kind look. No matter what coat pattern or color combination your cat has, you’ll love them endlessly. 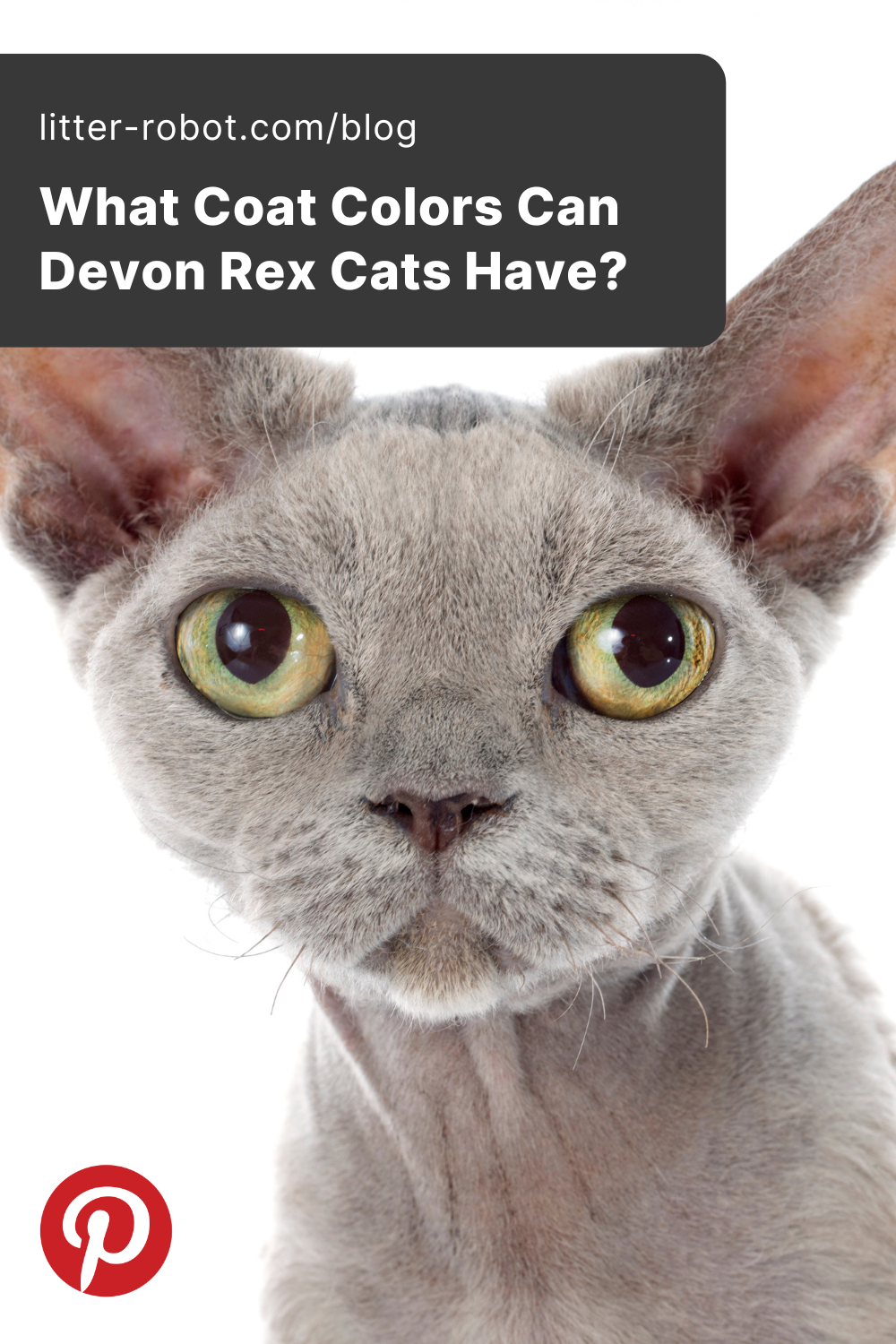