How To Tell If Your Cat Is a Ragamuffin

The Ragamuffin doesn’t just have a memorable name. They are unique cats all around—in fact, you might say they were made to max out the cat cuteness index. Ragamuffins are often mistaken for their next-door neighbor, the Ragdoll cat. While Ragamuffins do owe some of their heritage to the Ragdoll, they are still their own breed.

Your Ragamuffin will have a specific look, but you might not recognize it at first because of their similarity to the Ragdoll. These two breeds are alike in a lot of ways. With similar coats, appearances, and demeanors, there are some things a Ragamuffin is that a Ragdoll is not. Determining if your cat is a Ragamuffin comes down to a few key traits. 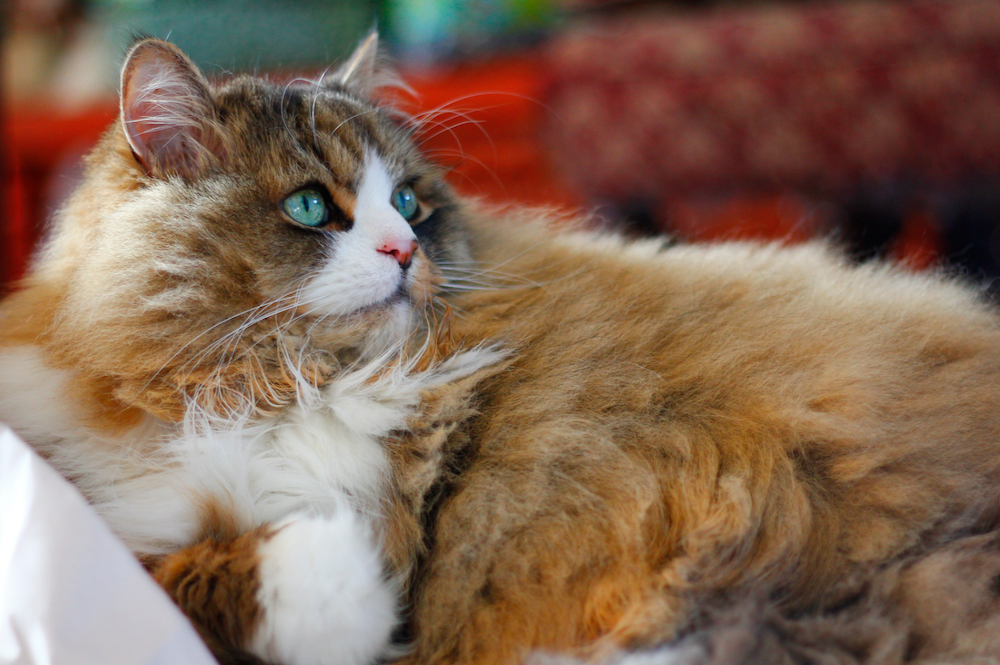 What is a Ragamuffin?

A Ragamuffin is a beautiful cat that you’d be lucky to spend time with. They are a combination of Ragdolls, Himalayans, Persians, and other Domestic Longhairs. So yes, the Ragamuffin breed is a very intentional creation. The breeders of the Ragamuffin wanted to expand on the Ragdoll.

Ragamuffins still share many traits with the Ragdoll cat. Most famously, this includes their iconic floppiness: When you hold them, they seem to flop in the same way that a rag doll would. They are large cats with long bodies that will surprise (and delight) you.

The Ragamuffin is a large-sized cat breed that appears even bigger than they truly are, thanks to their long coats and lengthy bodies. They are solid cats, sometimes weighing up to 20 pounds. Their coats are thick and feel dense when you run your fingers through the floof.

Ragamuffin kittens are born all white. As they age, they grow into their coat color and pattern. If you adopt one as a kitten, it’s fun to make a guess at what your Ragamuffin might end up looking like!

Ragamuffins take a while to fully mature, meaning they grow for several years. It can take upwards of 5 years for a Ragamuffin to reach their full size.

You might not know what they will look like for a few years, but you’ll enjoy those ever-changing days as they come. By then, you’ll love that huggable giant so much that their size and color won’t even phase you. 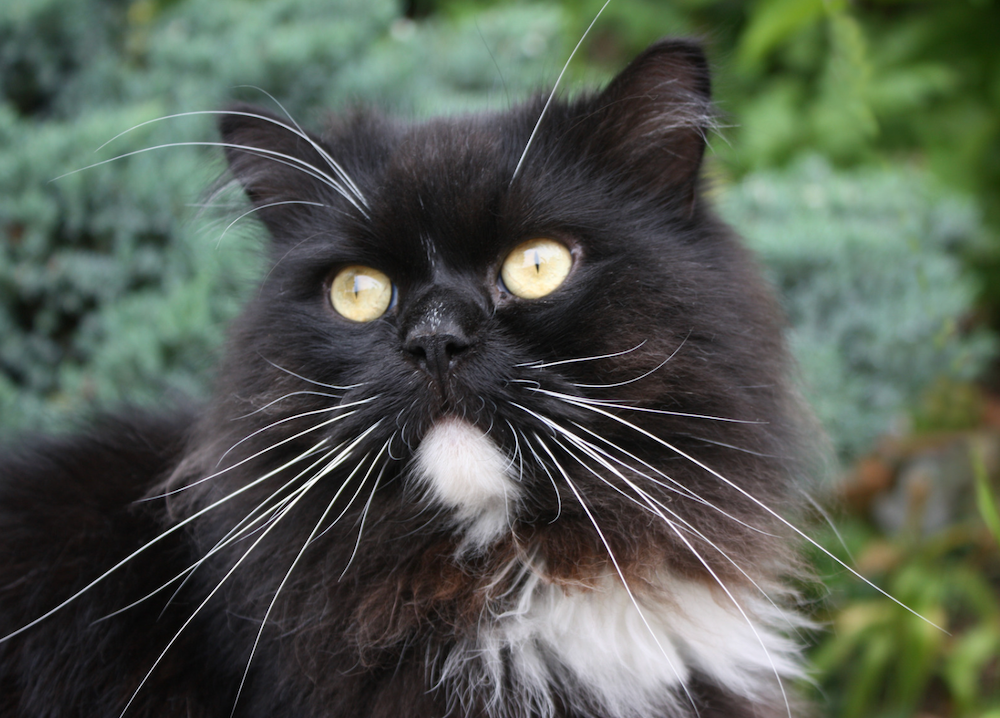 What is the history of the Ragamuffin?

The Ragamuffin is an intentional breed that originated due to selective breeding.

Ragdoll cats are a very popular breed, but their breed guidelines are strict. There are very specific requirements that must be met in order for a cat to be considered a Ragdoll. This meant that cats that didn’t portray exact traits but still came from Ragdolls were left out of the breed.

Breeders who loved the Ragdoll but wanted to see more accepted colors and patterns set out on a journey to create a breed that could be like the Ragdoll but with more variation. Thus, the Ragdoll was bred with other long-haired cat breeds like the Himalayan, Persian, and more.

Cats that came from these litters were accepted into the Ragamuffin breed. Originally, the breed’s name came about as something of a joke. Eventually Ragamuffin stuck as the official name. So, if you thought that Ragamuffin sounded like a nickname for a cat, you’re not wrong.

The Ragamuffin is a cat that is notably friendly and loving. They are affectionate kitties that want to be in your arms, on your lap, and by your side—wherever you’ll have them. They are people-oriented and love a good cuddle session.

They will warm up to new people and other members of your family, not really finding just one person to attach to. If someone gives your Ragamuffin attention, they will happily take it (or demand it).

They are gentle and relaxed but benefit greatly from daily mental stimulation. They also like a good game or learning a new trick, which keeps their minds agile and their bodies busy.

Additionally, Ragamuffins make fantastic companions to other pets because they are so tolerant. They can get along with cats, dogs, and other animals. Not to exclude anyone, these cats also love small children and all sorts of people.

If you want a cat that will pay attention to you in the form of cuddling after a long day, the Ragamuffin is a lovely choice. 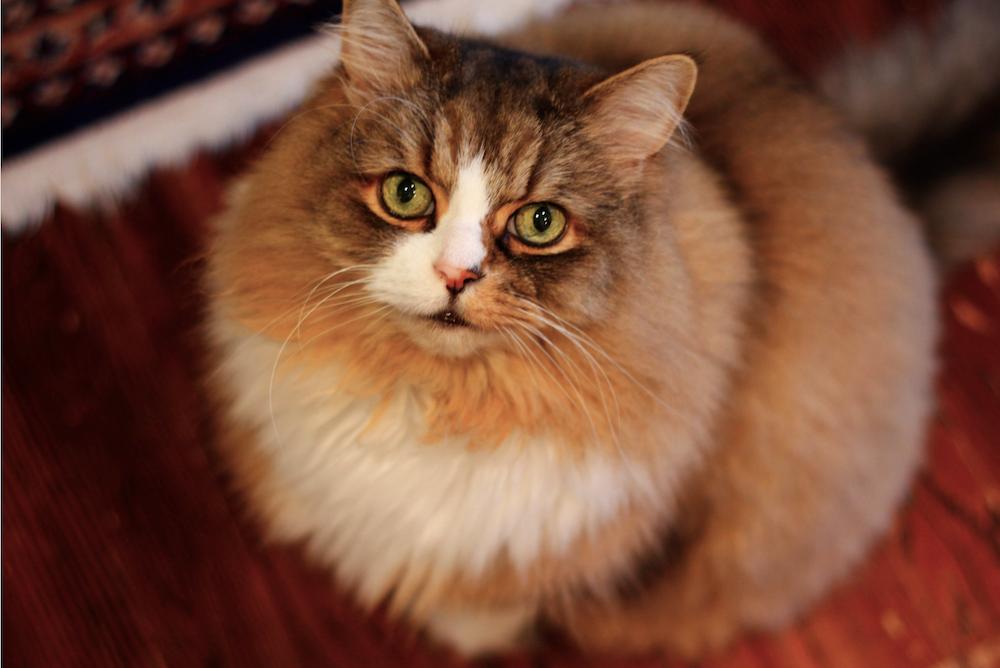 So, how do you tell if your cat is a Ragamuffin?

Since the Ragamuffin seems so similar to the Ragdoll cat, it can be tricky to distinguish between the two. Coat pattern, color, and eyes are the main distinctions between a Ragamuffin cat and a Ragdoll cat.

Their behaviors are very similar—both are friendly and adaptable. Ragamuffins especially have been noted to be great with kids because of their gentle nature.

The main difference between a Ragamuffin and a Ragdoll’s coat is the number of variations that cat associations allow. Almost any variation of coat pattern would be considered a Ragamuffin. Ragamuffins can be tabby, tortoiseshell, calico, solid coloring, tuxedo (or bicolor), and even shaded or smoky.

On the other hand, Ragdolls typically only come in a pointed coat. These points will be significantly darker than the base of their bodies.

Interestingly, the Ragamuffin’s coat doesn’t mat as quickly as a Ragdoll’s might, but keeping up with grooming is essential. For either a Ragamuffin or a Ragdoll, providing a clean litter box space also helps. Long hair can drag in the cat litter as they find their spot, but it’s less of a mess when the litter box cleans up for you.

A self-cleaning litter box like Litter-Robot makes it easier to keep your Ragamuffin’s coat clean (and easier to clean your litter box, with no scooping required—a win-win).

Another difference between the Ragamuffin and Ragdoll breeds is their eyes. Both cats have large eyes that are often wide and alert, but the shape is somewhat different. Ragamuffin cats have very round and walnut-shaped eyes, while Ragdoll cats display more of an oval shape.

Ragamuffins have a bit more versatile eye color variation. They can have any eye color, a luxury not granted to the Ragdoll. Ragdoll cats must have blue eyes, and if they don’t, it’s likely that you are looking into the eyes of a Ragamuffin.

This is probably the easiest way to determine if your cat is a Ragamuffin because their eye color is hard to misjudge. Add that to whether or not they’re pointed, and you’ll probably be able to make a guess yourself.

A cat of many colors

If you are trying to tell if a cat is a Ragamuffin or a Ragdoll, you can follow these two statements to give you a better idea of what breed it is you are dealing with:

Caring for a Ragamuffin

With a Ragamuffin, you get so many outstanding cat characteristics that you are bound to fall in love. They are affectionate and gentle cats that often get compared to dogs because of their friendly and people-oriented behavior.

These cats can be a bit lazy, so it’s vital to engage them in play whenever you can. They might not want to exercise all the time, but they will be happy when you give them a treat for good behavior. These cats really like to please—giving them games to play will enforce this good behavior.

A Ragamuffin can live a very happy life as long as you are keeping up with their grooming requirements, feeding them nutritional meals, and giving them plenty of love. (And of course regular vet visits are a must.) You’ll never want to adopt another breed again! 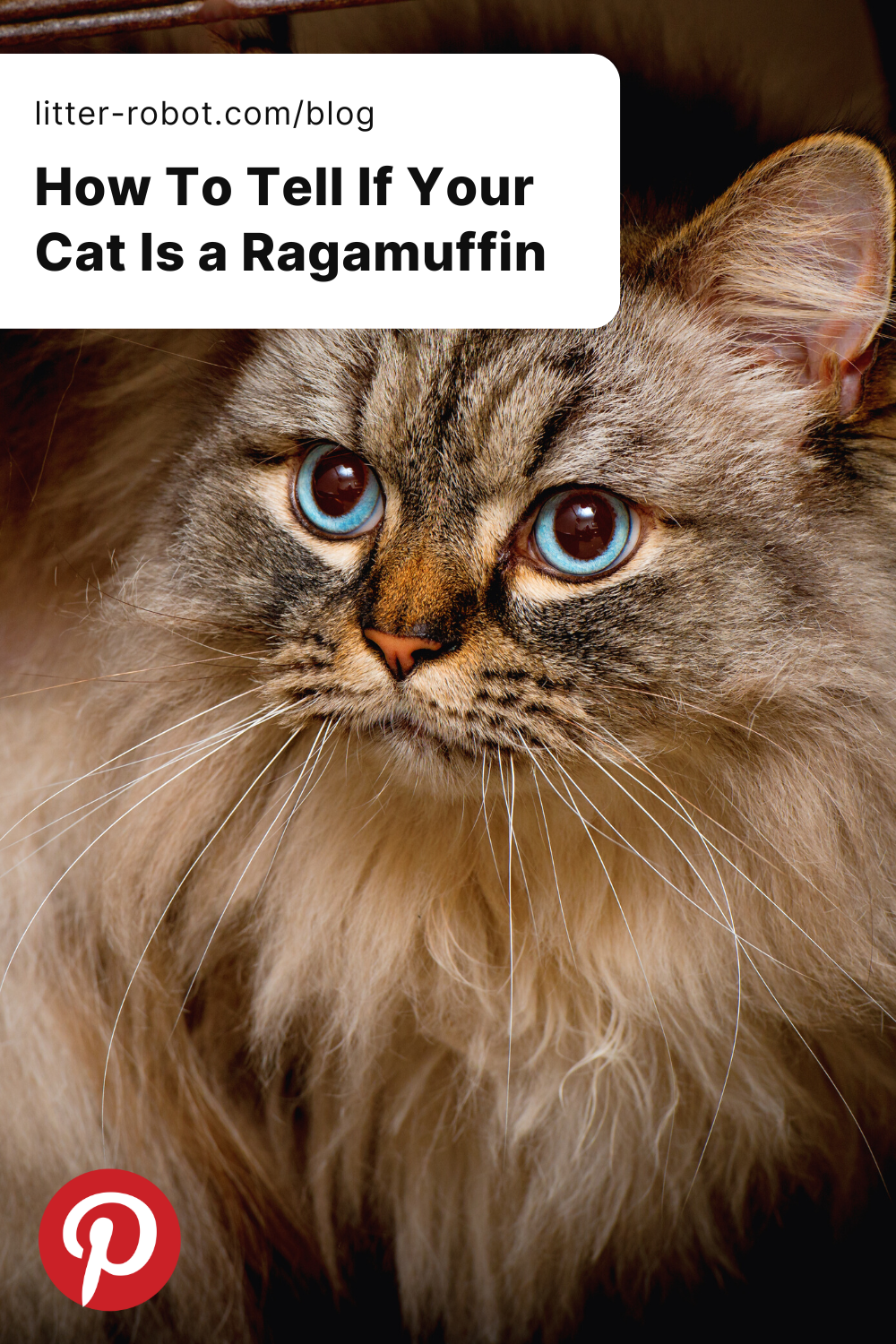