Burmese cats, once worshiped in Burmese temples as an embodiment of gods and goddesses, expects nothing short of royal treatment from their humans in their modern world. With an outgoing and playful personality, the Burmese cat is a loyal companion that loves to spend time with their families.

When you adopt a kitten or cat, you never truly know what you're in for. Every cat has their own personality, and personalities can change over time, especially as you get to know your furry friend better. Some cats will be playful and personable from the start, and others need a little more time to warm up to you.

Knowing what you want out of companionship with a cat can help you find the perfect fit for you. If you’re looking for a devoted kitty that knows how to have a fun time, let us introduce you to the Burmese cat.

Origin of the Burmese cat

The origins of the Burmese cat are recorded as far back as 1350 (and likely even earlier) when they were depicted in The Cat-Book Poems, estimated to have been written by Siamese monks between the 14th and 18th centuries. This breed was thought to have been worshiped in the Burmese temples as embodiments of the gods. At the very least, they were highly regarded and seen as sacred animals.

These kitties were known to the locals as “copper cats” because of the color of their coats. Today, the Burmese that we all know and love is traced back to one copper cat named Wong Mau, who ended up in San Francisco with Dr. Joseph G. Thompson. Wong Mau was a beautiful walnut color and captured the heart of Dr. Thompson.

The kittens displayed several colors and are considered the first true Burmese cats born. Now, the Burmese is one of the most recognizable and lovable cat breeds, and their amazing personalities only add to their magnificence. 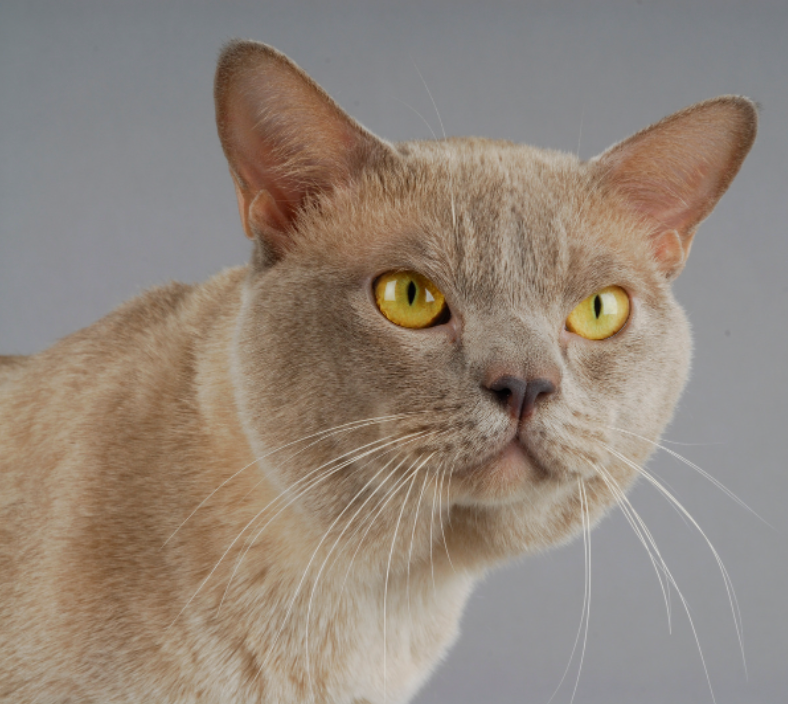 Burmese cats look like they are always alert and aware of what’s going on. They seem to be in tune with their surroundings because they have such wide, bright eyes and tall, forward-facing  ears.

Their bodies are compact and medium in size. Burmese cats are not overly large, but they are muscular and strong, which can add to their overall weight. They have sleek coats that help them appear smaller. So, you might be caught off guard when you pick up your Burmese and feel their dense weight.

Their coats are short and straight, and come in four colors: sable, platinum, blue, and champagne. They might have slightly darker faces, ears, paws, and tails, but most Burmese cats are one solid color. Their eyes are typically golden, sometimes tinting green in the sun. 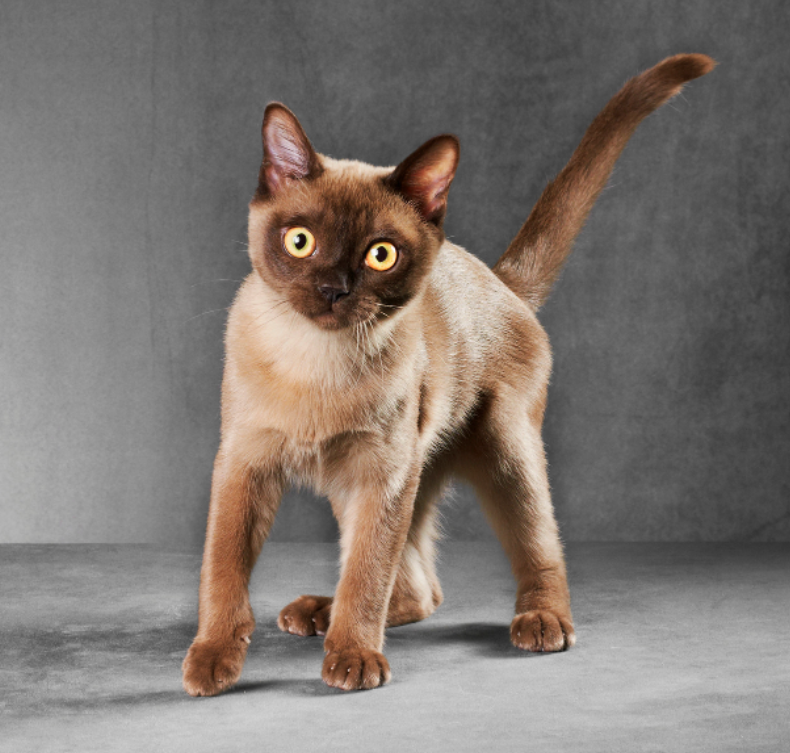 Not only are Burmese cats beautiful, elegant, and sacred, but they are also one of the most personable and loving breeds out there. Perhaps due to their hundreds of years of being worshiped, they love people and are deeply devoted to their humans.

If you are looking for a cat that will proudly stand by your side, the Burmese cat is for you. They are outgoing and smart while also enjoying a good cuddle session.

Yes, they’ll want to learn tricks, but only to impress you! If they think their humans are happy, they’ll do their best to maintain those positive emotions. For this reason, Burmese cats integrate well with families.

The Burmese has the lifelong personality of a kitten. Regardless of age, they will be just as playful and rambunctious into adulthood. This means that there is no exact moment when the breed is known to “settle down.” They will go-go-go until it’s time to sleep, wake up, and go-go-go again.

Because the Burmese cat is so energetic and playful, you’ll need to commit to more time spent engaging in mentally stimulating puzzles and physical activity. You won’t just be lounging around with a Burmese; you’ll need to help entertain them and give them play options. With cat trees, scratching posts, and plenty of toys, your Burmese will easily fill their downtime (that they would otherwise devote to mischief-making).

Devoted to their humans

The Burmese cat loves their humans and wants to spend every second by their side. Whether they are following you around the house, watching you as you fall asleep on the couch, or sniffing around while you prepare dinner, they are interested in what you’re doing and wondering if they could be of assistance.

The Burmese is a cat that will be by your side when you wake up and waiting for you at your door when you get home. However, if you don’t reciprocate the same love and devotion, you might hurt their feelings! Burmese cats can develop separation anxiety when they don’t feel they are getting enough love and attention from their humans.

The Burmese cat doesn’t just pick one human to bond with and ignore the rest—they actually thrive in family settings. When more than one person is around to give them attention, the Burmese cat is truly in their glory. This makes them a great cat to bring into a family with children because they are tolerant and love to make new friends.

You might notice that your Burmese is always hanging around you when you have guests over, and that’s only because they think everyone is there for them. They take very well to strangers.

Once they’ve opened up, they become the center of attention: You’ll have to warn your guests about the show your Burmese will likely put on—they’ll do anything for some “oohs” and “aahs.”

Burmese cats are smart cats that like to be involved. They like to learn new tricks and impress their people. They will watch you while you work on a task, open cupboards in high places, and use anything and everything as a toy.

To make sure they are mentally stimulated, have toys scattered around the house. This way, as your Burmese moves from one room to the next, there is something that will keep them occupied.

You should have plenty of toys and cat furniture, including scratching posts, cat shelves, and cat trees, to satisfy your cat’s curious nature. If you’re able to entertain them by being involved and active, you’ll see that they are much more content! Burmese cats love when their humans participate in playtime with them.

Female Burmese cats are known to run the house and be overly involved, as they are naturally more curious than their male counterparts. Female Burmese might want you to spend more time focusing on them and will be a bit more demanding.

While devoted and loving towards their humans, males have a more mellow personality and enjoy lounging around for a good chunk of their day. It’s good to consider these factors before adopting a cat. You can determine your needs and wants before committing to an animal that needs you! 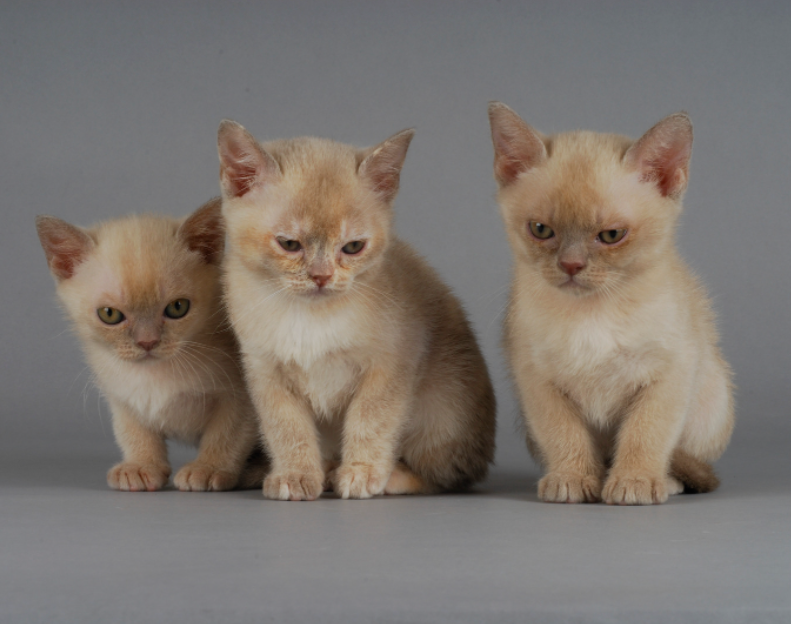 Caring for a Burmese cat

Burmese cats deserve lots of love and won’t settle for anything short of adoration. They like to have everything they need with them: their food, their toys, their humans, and their treats. Remember, these cats were once thought of as embodiments of gods and goddesses, so don’t be surprised when they want to be treated as such.

Burmese cats like clean and comfortable spaces, so investing in a self-cleaning litter box like Litter-Robot makes life with a cat much easier. You never have to scoop the litter box, and your Burmese will have the fresh bathroom space they deserve.

Researching breeds and understanding your needs helps to place the right people with the best pets. The Burmese cat is a special and loving kitty that can’t wait to make themselves right at home with you. Can you?