The Persian cat is one of the highest-regarded cat breeds in North America and has roots that go back hundreds and hundreds of years. If they could talk, we’d sure love to ask them about their long, unique history. (But they probably wouldn’t answer, anyway—cats do their own thing, and we’re just lucky to be along for the ride!)

Persians’ long, silky coats, wide round eyes, and sweet temperaments help these cats stand out as loyal and loving pets. The Persian cat will give all their love to their families, but can sometimes seem reserved.

This means they need more commitment from you. It takes time to build up their trust, but it’s completely worth it when you reach BFF status with a Persian.

Overview of the Persian cat 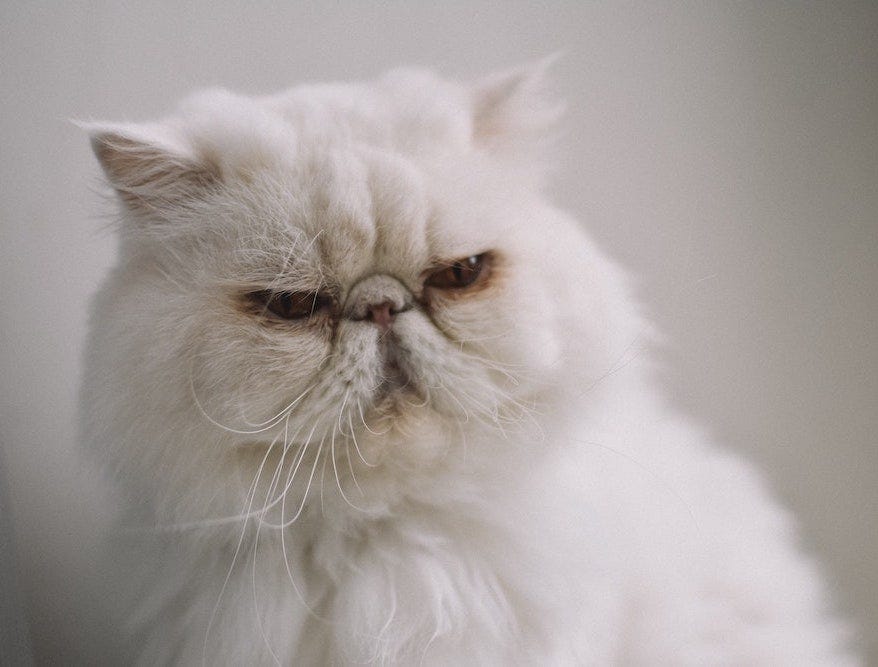 The Persian cat is considered a medium to large cat, with luscious fur, a rather round face, and a short muzzle with wide-set eyes. They are considered heavy-boned and are typically well-balanced with their body’s proportions. They have short thick legs, large paws, a thick neck, and a broad chest.

Persians will weigh anywhere from 7-14 pounds, and the males are typically known to be a little bit bigger than the females.

The Persian is a cat that enjoys a good lounge, and because of their lower activity levels, weight gain is possible. Feeding your Persian a proper diet and giving them plenty of opportunities to play can ensure that they keep their weight under control.

The Persian is a relatively long cat, though they’re no Maine Coon! They typically range from 14-18 inches in length, from their nose to the tip of their tails. You'd best be able to tell their length when they are laid out on your favorite sofa, sunbathing.

A coat of many colors

The Persians' coat is truly iconic in the cat world. It is long, thick, and silky—as beautiful to look at as it is lovely to pet. They are best known for their solid white-cream coat, but their patterns and coloring range widely, including calico, tabby, bicolor, or pointed, and blue, black, red (orange), and beyond.

Persian cats can live for a long time if they are properly cared for. Their typical lifespan is between 10 and 17 years.

To maintain your Persian’s health care needs, make sure you’re visiting the vet at least every year—and any time something seems amiss with their physical condition or behavior. 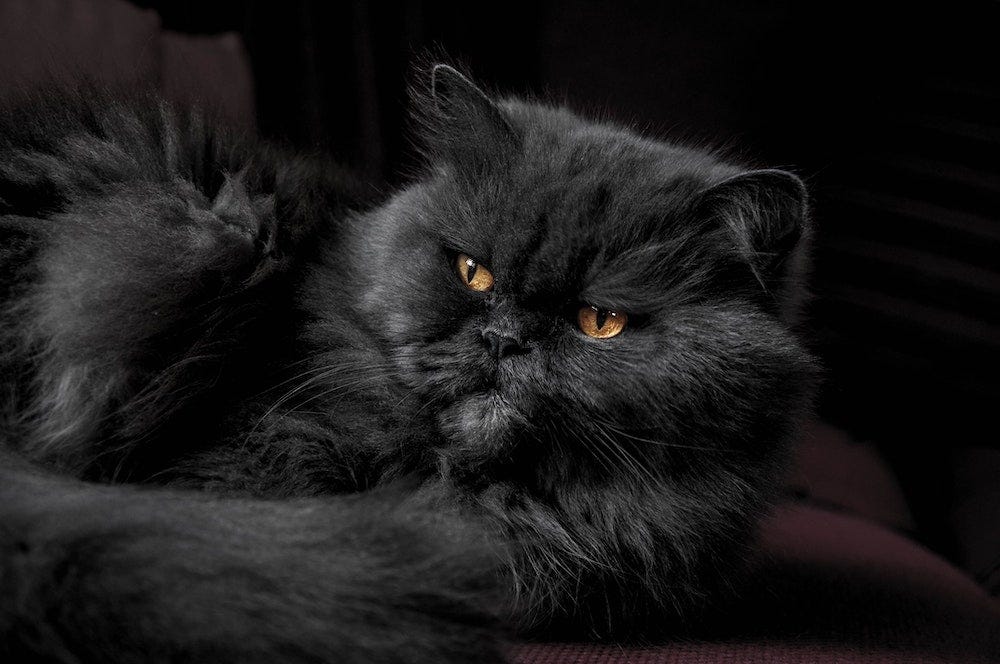 The only known fact about the Persian cat’s history is that they’ve been around for a very long time. It is thought that the Persian cat originated in Persia (modern-day Iran) and Turkey, having potentially developed from Turkish Angora cats crossed with other Asian longhair cats.

The long hair on Persians is also thought to be a random mutation that became the dominant trait, passing along in the genes to each new litter born. The Persian cats we know and love today are thought to have taken (their oh-so-cute) shape around the 1600s in Mesopotamia—they don’t call it the Cradle of Civilization (also known as the Fertile Crescent) for nothing!

Travels to the Middle East

An Italian traveler named Pietro Della Valle (1586–1652) is thought to have come across these cats in Persia and taken them back to Europe. He brought them first to Italy in 1620, and then they made their way throughout Europe.

Some documents included descriptions of both Persian and Angora cat breeds traveling with Europeans on their ships, describing them as having long, silky fur.

Other travelers brought these cats from Italy to France and then to England. In France, these fluffy kitties gained immense popularity. As a result, they were known as “French cats” for quite some time. In Britain, they climbed up the social cat tree, and soon this Iranian cat was more sought after in Britain than the Angora cat.

What likely assisted this uprise in popularity occurred in the early 1900s, when Queen Victoria adopted two of her own pet Persians. This boosted the desire for these pets and gave them the status of royalty in many people’s eyes. Who wouldn’t want to have the same cat as a Queen?

In Britain, all long-haired cats (Persian, Angora, Russian) were known as Longhairs, and each color was its own separate breed.

The United States didn’t meet Persian cats until the late 1800s—but when they did, there was no stopping that love story. Unlike in Britain, the Persian was recognized as its own breed, with colors and patterns as their own divisions.

Characteristics of the modern Persian cat 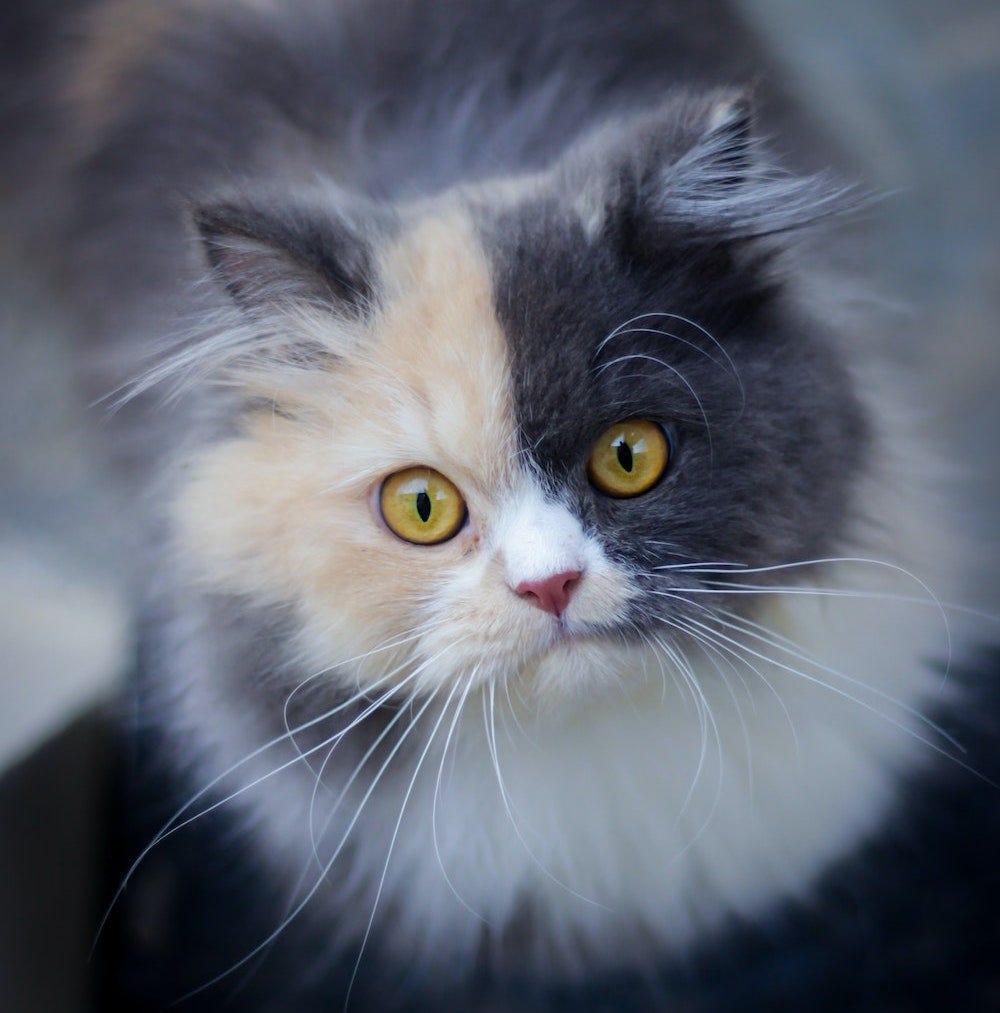 The main characteristic of the Persian might be their short and slightly snubbed noses and wide-set eyes. This gives the Persian a very one-of-kind look that’s hard to miss. This roundness makes them extremely appealing as companions because they give off friendly and soft vibes.

These cats are quite solid, even a bit heavier than you might expect. Most Persians have long coats that need frequent grooming.

The Persian cat is known for their charming temperament, laid-back personality, and lower activity needs. This cat won’t be jumping around all day causing a ruckus, but instead will find a nice place to lounge and watch what everyone is doing.

Don’t worry, though. The Persian still likes to play and benefits from having plenty of access to cat trees and toys. They might need a little bit of a push, but once they start goofing off, they will be glad to continue on.

The Persian cat is friendly and easygoing, but that doesn’t mean they bond with everyone who walks in the door. You have to earn your Persian's trust.

It takes a commitment to form trust with your Persian, but it’s always worth it in the end. These cats love attention once they’ve figured you out, but they won’t harass you for it. You’ll know when your cat wants some more attention!

Caring for a Persian cat

You need to commit to taking care of a Persian cat. The long, luscious fur that probably drew you in will require daily grooming to ensure it doesn’t become matted or tangled. You should be brushing your Persian once a day, and bathing them monthly.

Persians’ fur does not naturally clean itself of debris and dirt, so they rely on their humans to help groom them. This will help keep the fur in good condition and avoid having to painfully detangle your fur baby’s hair.

Persian cats are also known to have eyes that tear more frequently than other cats. These tears can cause staining on their fur near their eyes, so it’s best to wipe their eyes daily. 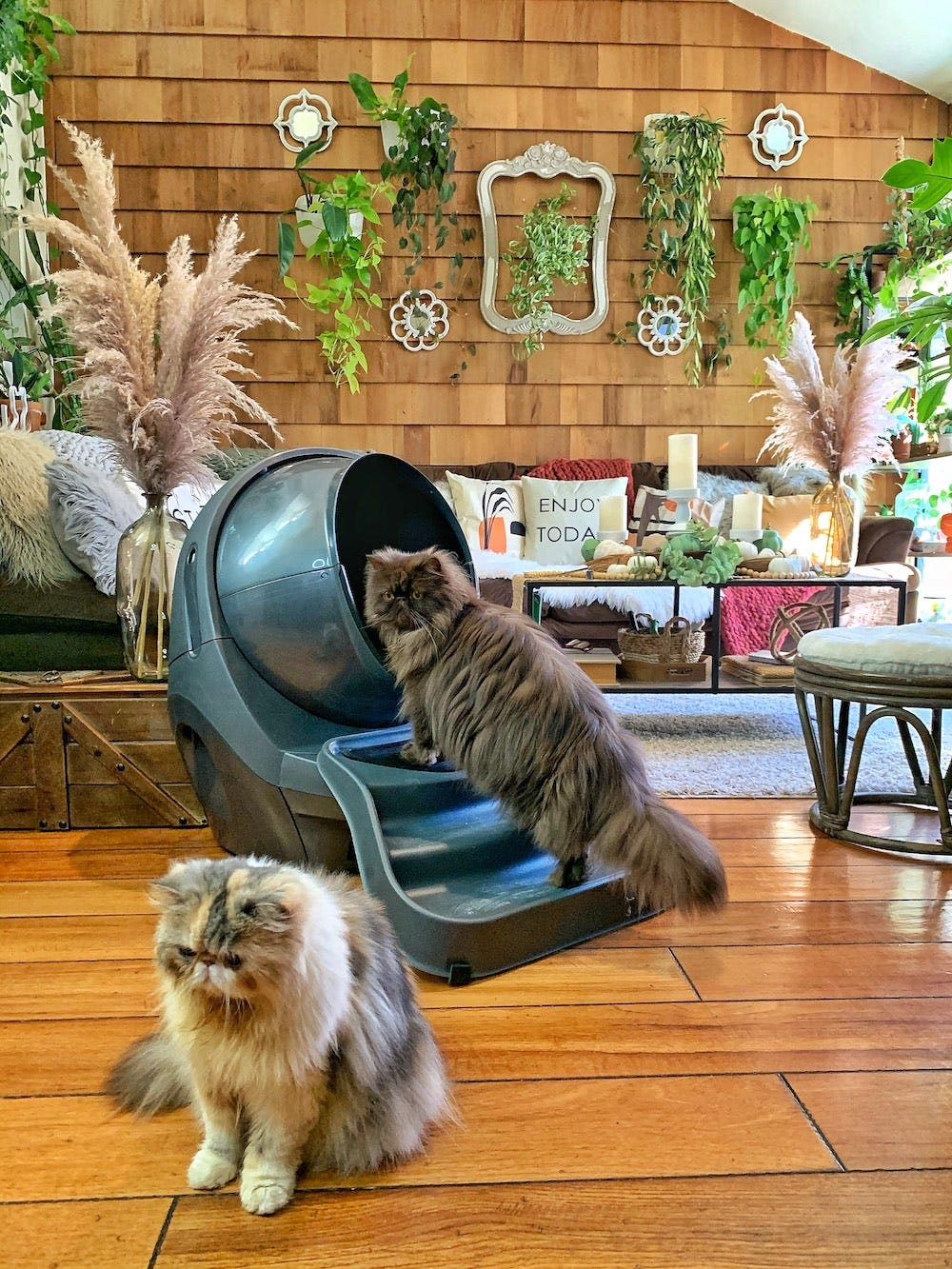 Persians are very specific about their litter box. Pet parents know their Persians demand clean environments: a dirty litter box will not fly. Maybe you are super busy and can’t scoop the litter box after every use (or you just don’t love the idea of cleaning a litter box). We get it.

In this case, it will be beneficial to invest in Litter-Robot. This is a self-cleaning litter box that provides your Persian a clean bed of litter for every use, so they’ll feel comfortable using their bathroom at any point of the day.

Like many other purebred cats, the Persian is more prone to certain health risks established through selective breeding in the name of creating aesthetically popular traits.

Some common health issues that Persians have are:

Because we know that Persians might be more susceptible to certain risks, it’s important to keep an eye on their health at all times. When in doubt, talk to your vet.

The Persian cat is a beautiful and majestic breed that you’d be lucky to have in your home. People who enjoy a quiet, laid-back lifestyle, sunbathing, reading on the couch, and relaxation will find a great companion in the Persian cat. 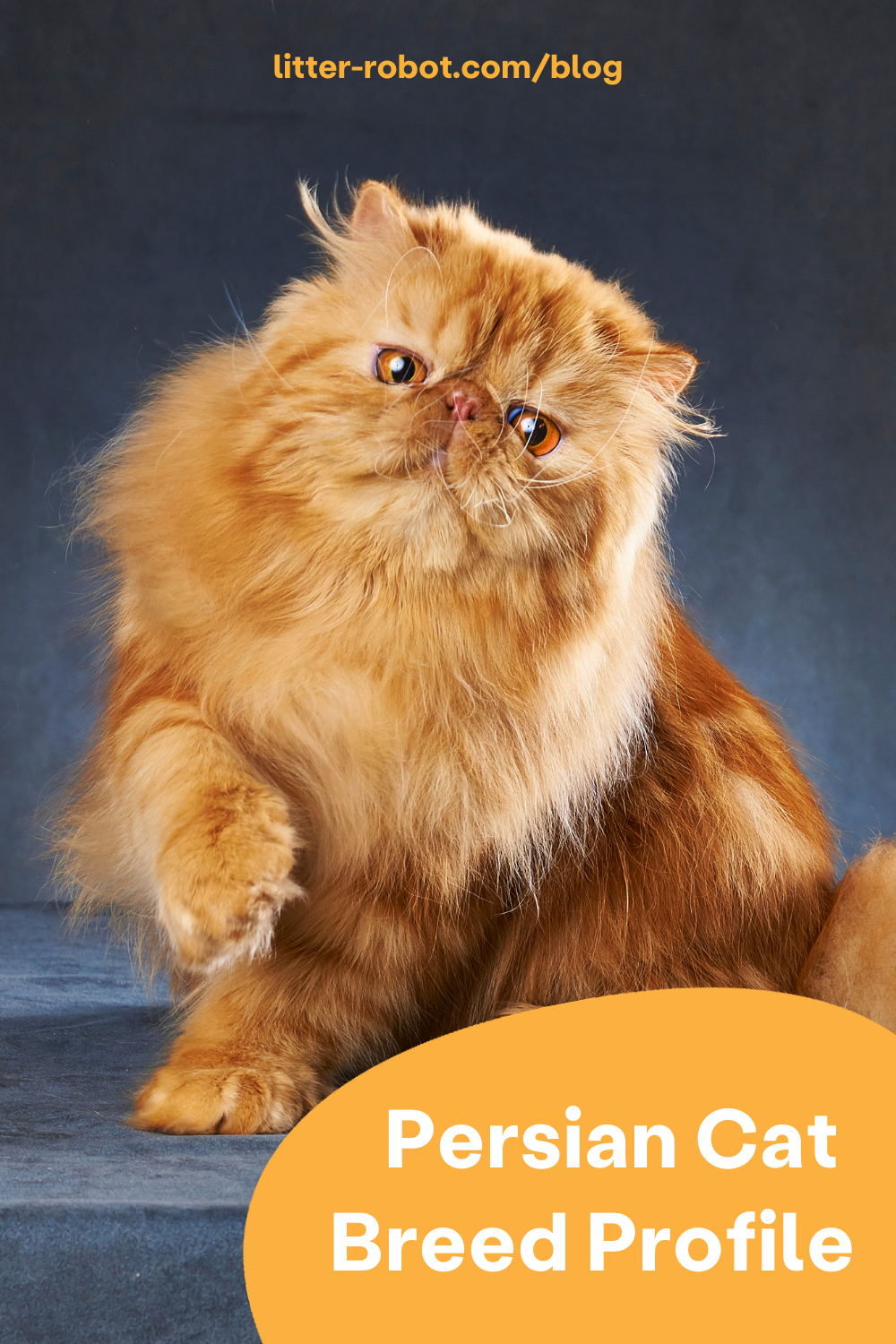