9 Facts About the Storied Siamese Cat

As one of the oldest natural cat breeds, the Siamese has a colorful past: She’s been companion to ancient temple priests, revered patron of royal families, and contributor to countless modern feline pedigrees. She has ventured across continents and made notable appearances in popular culture. It’s time to learn about the unequivocal Siamese cat!

What is modern-day Thailand was for many centuries known as the Kingdom of Siam. Particularly during the Ayutthaya Kingdom (1351-1767 AD), Siamese Buddhist monks welcomed cats in their temples. In fact, it was believed that the Siamese cat would receive a royal family member’s soul after death. The cat was then moved to a temple, where she lived the rest of her life in luxury.

They’re in a 14th-century book of cat poems. 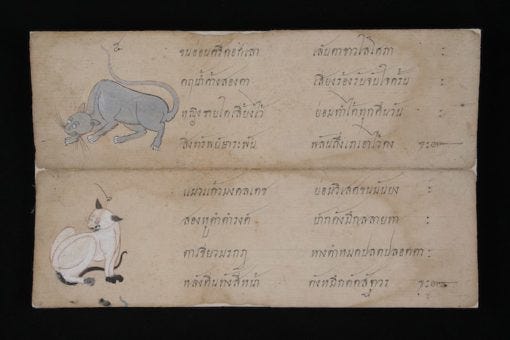 The Siamese monks loved the temple cats (who wouldn’t?). They even went so far as to write and illustrate manuscripts (estimated to have been written between the 14th and 18th centuries) called Tamra Maew, translated as The Cat-Book Poems. The Siamese cat makes several appearances in the Tamra Maew as a pale-coated feline with a black mask, tail, feet, and ears.

The Siamese cat is distinctively “pointed.”

The Siamese earned the nicknamed “Meezer” for her overly vocal tendencies. She has a loud, low-pitched voice that could be compared to the cries of a human baby. She is demanding of both conversation and attention—and always has to have the last word.

The first Siamese cat to enter the U.S. was a gift to President Hayes’ wife.

A Siamese cat was part of a king’s coronation in 1926. 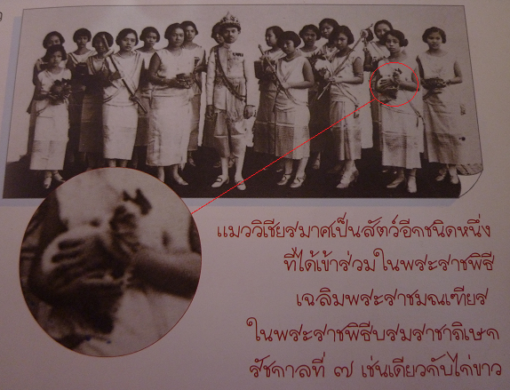 They are known for their intelligence.

The Siamese cat is active and clever. She can even learn to play fetch and walk on a leash. When she’s not getting attention, she’ll keep herself entertained by “turning on faucets, opening cabinets, seeking out new hideaways to frustrate anyone who might be searching for her, and watching television with clear interest.”

They’ve contributed to the creation of at least a dozen other cat breeds.

The Siamese cat has been a “parent breed” of many other feline pedigrees. They’ve contributed to the creation of the Balinese, Oriental Shorthair and Longhair, Himalayan, Tonkinese, Havana Brown, Snowshoe, Burmese, Colorpoint Shorthair, Javanese, Kashmir, Ocicat, Owyhee Bob, and more!

The Siamese cat often shows up in pop culture.

Who can forget “We are Siame-ese if you ple-ease?” The Siamese cat has made some rather infamous appearances in Disney movies, from the animated Lady and the Tramp and The Aristocats to the action-packed The Incredible Journey and That Darn Cat! The breed has also made appearances in long-running TV shows like Bewitched and Charmed. (Noticing a witchy theme, anyone? On the bright side, it gave stigmatized black cats a break!) The Siamese cat finally broke the mold by appearing on the cover art for the Blink-182 album Cheshire Cat (who was not, in fact, Siamese). 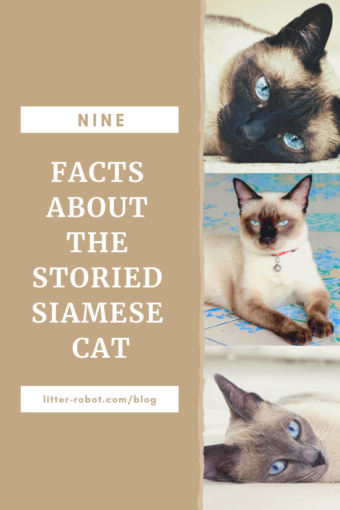