Society would have us believe that there’s a great divide between cats and dogs. (Not to mention cat people and dog people.) We’re taught that cats are refined, dignified creatures that have no interest in being trained or going for a romp in the water. In reality, it’s surprisingly common to come across cats that play fetch, learn tricks, and love to swim! If you’re looking for cats that act like dogs, look no further than these 25 breeds. 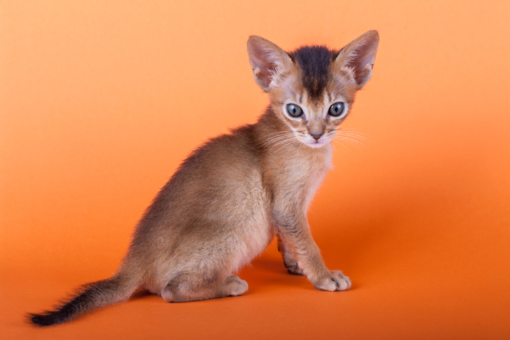 The Abyssinian cat, which looks like a small mountain lion, jumps higher and plays harder than your average feline. She’s one of the most energetic cat breeds, and loves to interact with her humans and environment. 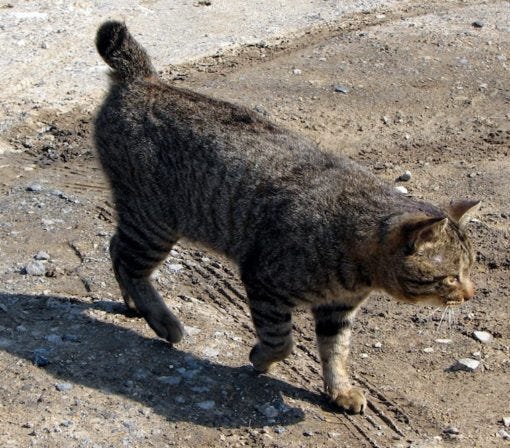 The American Bobtail has been called the Golden Retriever of the cat world. He is devoted to his people, adaptable, and can easily be taught to walk on a leash and play fetch. 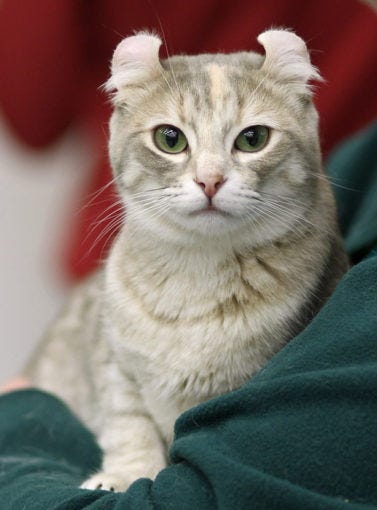 The American Curl, with his distinct ears, is known as the “Peter Pan” of cats due to retaining a kitten-like personality throughout his life. He is exceedingly people-oriented and wants to be included in all your activities. 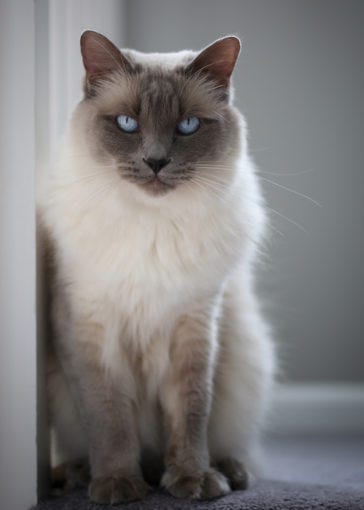 The Balinese cat is the long-haired version of the Siamese. She loves to walk on leashes and play fetch. She is a demanding and social cat that will follow you around wherever you go. 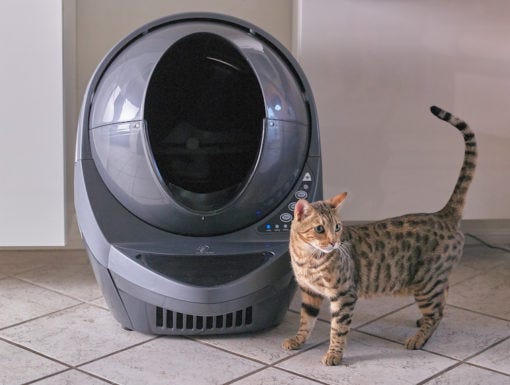 Many Bengals enjoy water—they may even join you while you’re taking a shower! The leopard-like Bengal cat also excels at learning tricks and playing fetch. Cats that act like dogs, indeed! 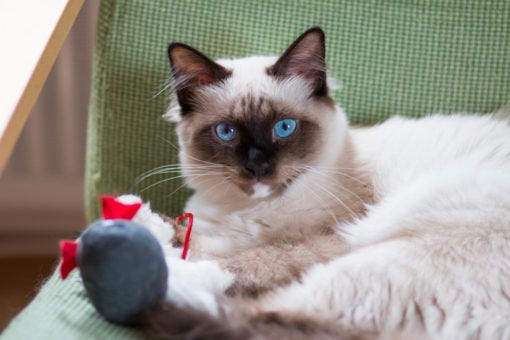 Dogs are said to be man’s best friend, but Birman cats were sacred companions to the temple priests in ancient Burma. Their docile behavior makes them a great low-maintenance cat, albeit playful and loving. 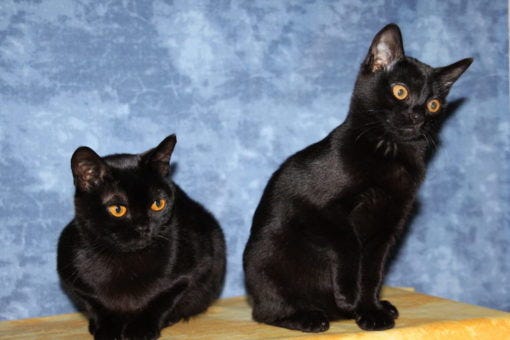 The little house panther, also known as the Bombay, will thrive with a family who wants to teach him tricks and play with him. He loves to be in your company, and will greet both you and visitors joyously at the door. 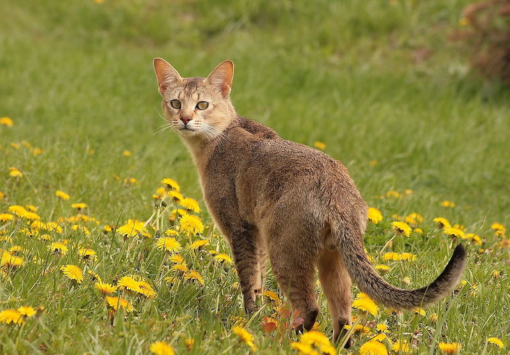 The Chausie, bred from the Jungle Cat, is ready to play at a moment’s notice. She is a long-legged, tall, statuesque cat that it is built for running and jumping. She loves to play fetch and walk on a leash. 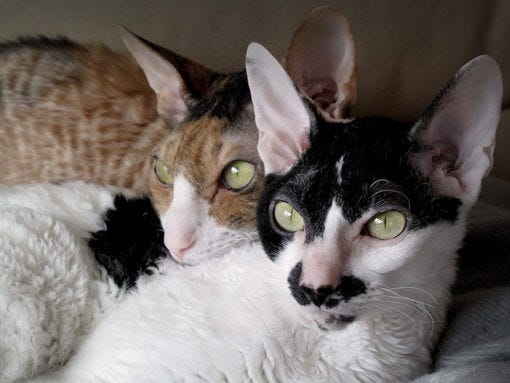 The curly-coated Cornish Rex are dog-like cats in personality. They love to play fetch and be the center of attention. Their long toes enable them to manipulate objects, likely aiding in their antics. 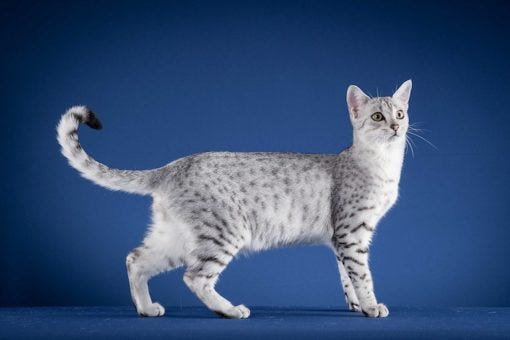 Speaking of cats that act like dogs—the Egyptian Mau could outrace the average canine! He is the fastest domestic house cat, and can run up to 30 mph. He is fiercely devoted to his family and also loves playing in water. 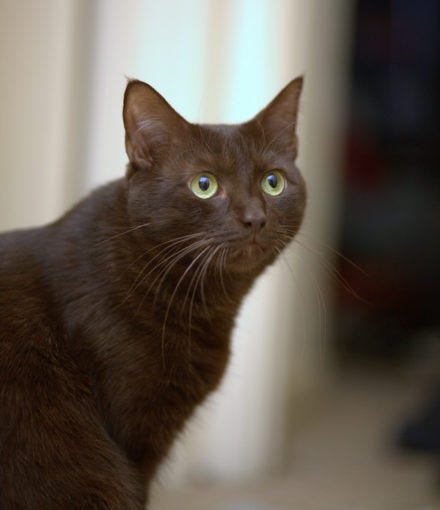 The striking brown Havana is often compared to a puppy, as she loves to follow her family around. Outgoing, playful, and intelligent, “Brownies” are easily trained to fetch. 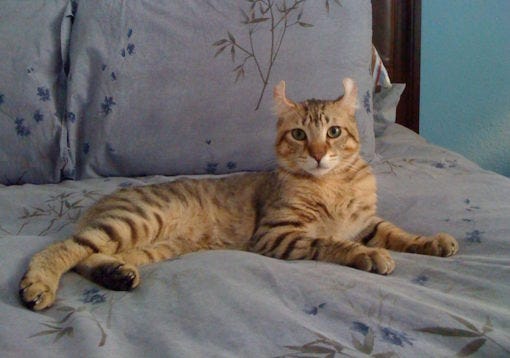 Highlanders, a cross between a Desert Lynx and the Jungle Curl, are dog-like cats in disposition and are easily trained. They love playing, love water, and love to expend energy! 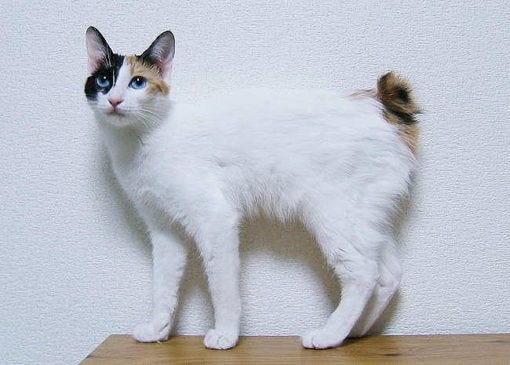 Written records and paintings document the existence of the Japanese Bobtail in Japan for at least 1,000 years. She is known for her short “bunny” tail, as well as learning tricks and walking on a leash. 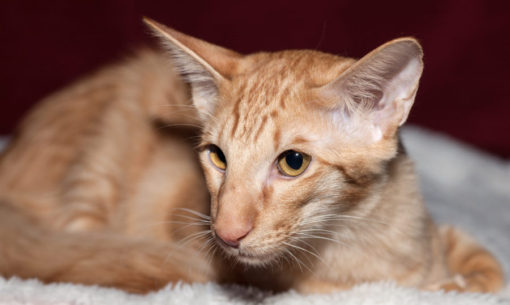 The Javanese love to be helpful. They are highly intelligent, athletic, and love to play. These dog-like cats also learn tricks easily and always need some form of entertainment. 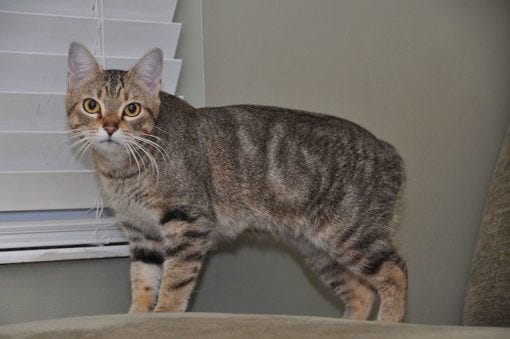 The tail-free Manx is said to be a “watchcat” that reacts rapidly and will growl and even sometimes attack if in a situation out of the ordinary. Otherwise, he is highly people-oriented and loves to learn tricks. 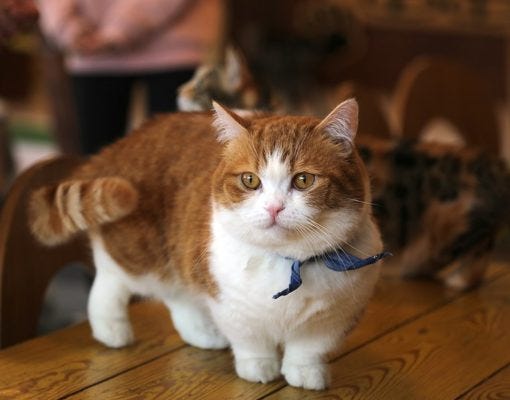 Munchkin cats are happy-go-lucky cats that are also known for some odd dog behavior of their own, often borrowing small, shiny objects and stashing them away for later play. 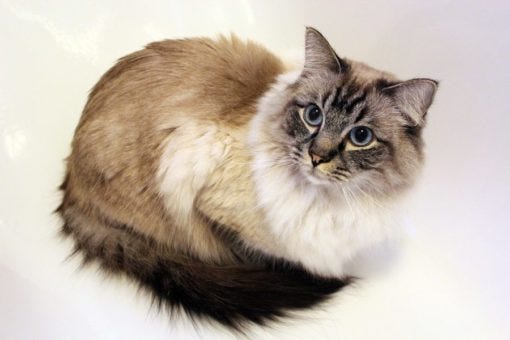 Ragdoll cats are literally called “puppycats” because they’re known to collapse into the arms of anyone who holds them. They often learn to come when called and can easily pick up tricks. 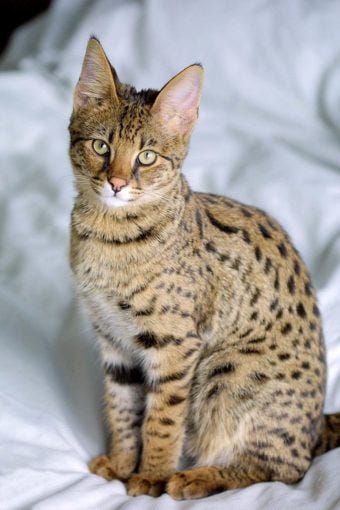 The exotic-looking Savannah cat is a clever cat that will play jokes on you. He can jump to very high places, and takes well to walking on a leash and playing in water. You must have plenty of time to spend with your Savannah. 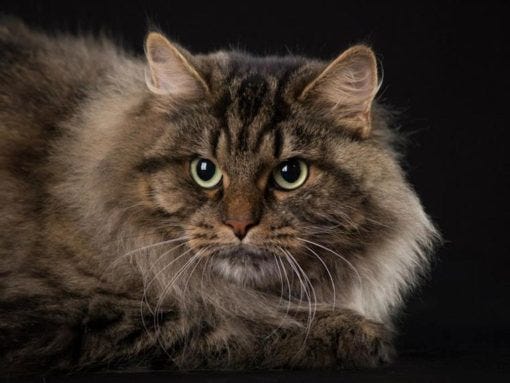 The thick-haired Siberian cat has lots of personality and playfulness. She is amenable to handling, and has a fascination with water. She’s also very intelligent and a good problem solver. 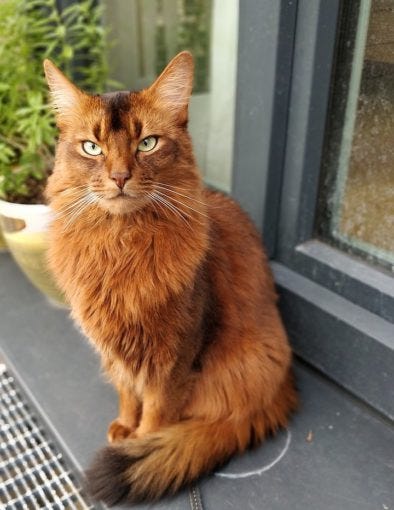 This fox-like cat will investigate what you are doing, no matter what it is. The Somali cat is always in motion and adores being the center of attention. He also learns tricks easily, and may even enjoy running a feline agility course. 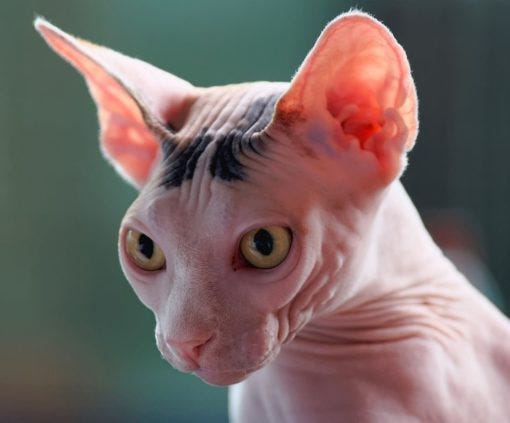 The Sphynx cat will do anything for a laugh, as cats that act like dogs often do. This hairless cat always wants to be the center of attention, and may get into trouble otherwise. Don’t worry, she also has a sweet side—she loves to be held and sleep with you. 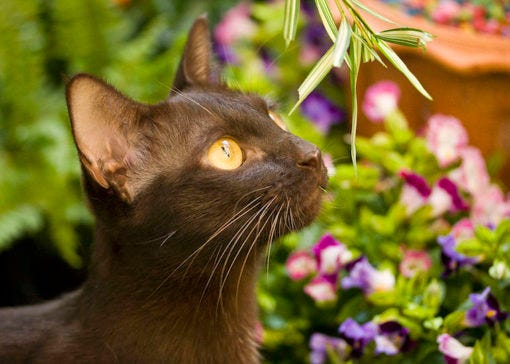 Originating in Thailand, this rare, natural breed is communicative and people-oriented. She is active, playful, and does not like to be left alone or ignored. 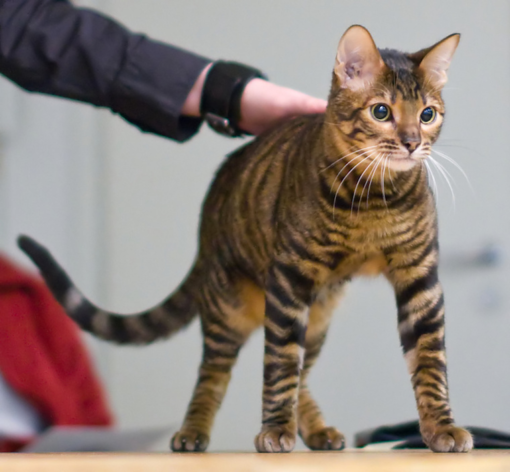 Bred to look like a small tiger, the Toyger likes playing fetch and playing with toys. He is active enough to learn tricks, but not energetic enough to wear you out. He’s the best of both worlds! 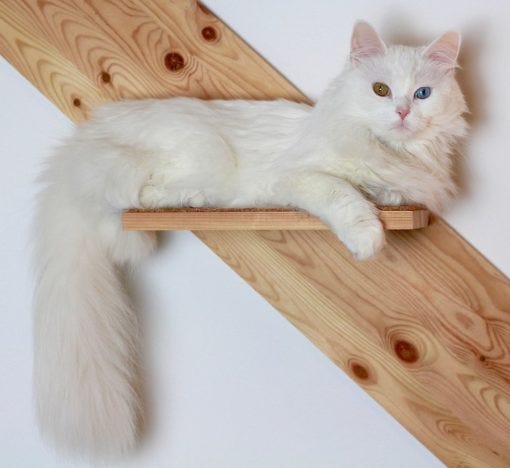 The lovely Turkish Angora cat tends to be an excellent swimmer. She keeps her kitten-like playfulness well into old age. She is, however, a demanding cat with a constant need for play and a short attention span. 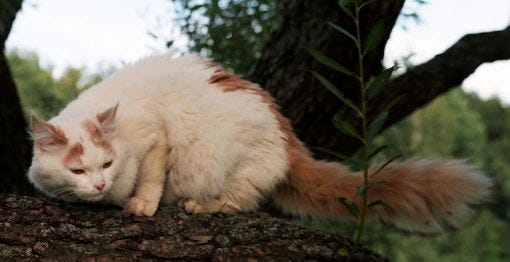 Of all the cats that act like dogs, the large Turkish Van is best known for his love of water. He’s even referred to as the “Swimming Cat” in his homeland of Turkey. His love of water may get him into trouble around the house! 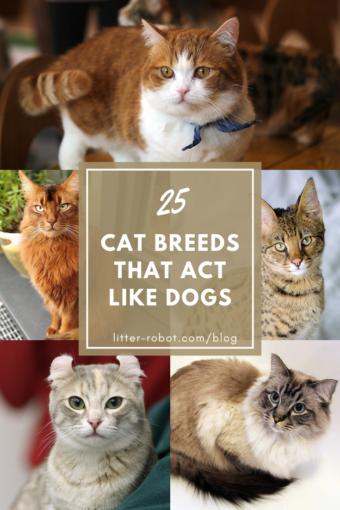