Why Is My Cat Going to the Litter Box Every Few Minutes?

Why is my cat going to the litter box every few minutes?

First off, if you use a traditional litter box and don’t scoop every day, your cat may be making frequent “unsatisfactory” trips to the litter box because the box isn’t as clean as your cat would prefer.

Yet, say you keep a tidy litter box or own a self-cleaning litter box—if your cat keeps going to the litter box but nothing happens, there are a few medical issues that may be occuring.

The majority of the time, your cat’s urinary symptoms are the result of feline idiopathic cystitis (sometimes called feline lower urinary tract disease or feline urologic syndrome), or a sterile inflammation of the bladder. Signs of FIC include, but are not limited to:

More rarely, your cat may be experiencing a UTI. UTIs are more often seen in older cats (greater than 10 years of age). With a UTI, you’re more likely to notice small amounts of foul-smelling, blood-tinged urine on the fur or in the cat carrier.

The symptoms of a cat UTI are very similar to FIC. Veterinarians can discern which infection your cat has by performing a medical work-up that includes a physical exam, a urine sample, and a urine culture.

The symptoms of feline urethral obstruction are also similar to FIC and UTIs—but an FUO can be a life-threatening emergency. With an FUO, the poisons from your cat’s kidneys build up in the bloodstream from the inability to urinate, resulting in temporary kidney failure, salt balance abnormalities, and, rarely, death.

Your vet will note that with an FUO, a large, distended, non-expressible bladder is present (as compared to a small, painful bladder with a UTI).

If your cat keeps going to the litter box but nothing happens, you could be dealing with something other than a urinary issue. Instead, your cat could have chronic constipation. Constipation is more often seen in middle-aged to geriatric cats (around 8+ years of age). Untreated, cat constipation can result in abnormal enlargement of the colon (called megacolon), which can be chronically difficult—and costly—to manage.

On the other hand, your cat going to the litter box every few minutes with diarrhea could be a sign of inflammatory bowel disease. IBD in cats is similar to irritable bowel syndrome (IBS) or Crohn’s disease in humans. Another prominent sign of IBD in cats is vomiting.

Learn more about what’s normal and what isn’t when it comes to cat poop.

Cat going in and out of the litter box? There’s an app for that 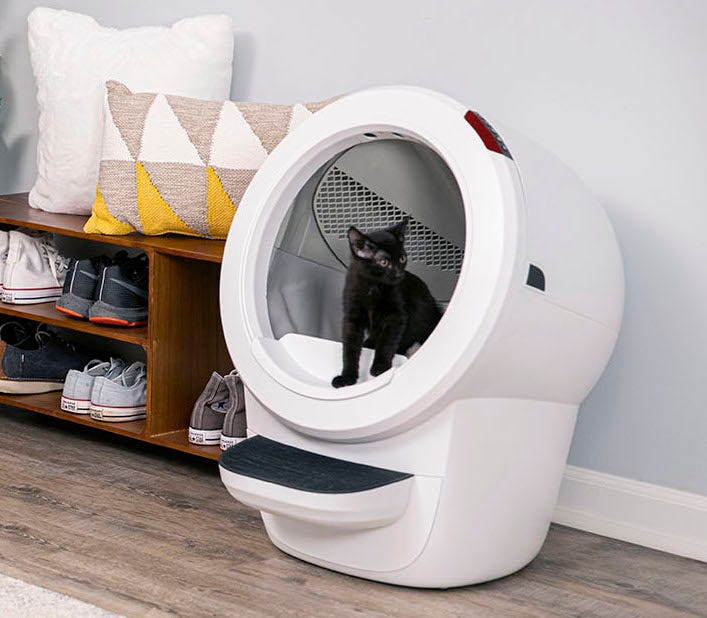 If you’re reading this and you’re unsure about your cat’s litter box habits, then it’s time to change that! With a WiFi-enabled litter box like Litter-Robot 4, the Whisker app will notify you every time your kitty uses the litter box. If you notice a major spike in activity, you can act fast by taking your cat to the vet or the emergency clinic.

In addition to app notifications that provide recent insights into your cat’s health, Litter-Robot is self-cleaning—meaning you never have to scoop again. However, it’s a good idea to keep an eye on your cat’s litter box habits, regardless of whether you’re the one cleaning the box.

Is your cat going to the litter box every few minutes? Now you know that if the answer is yes, you had better get to your veterinarian as soon as possible.