Do you belong to the majority of the population who thinks “cat scratch fever” is nothing more than a 1977 rock song with a signature riff and questionable lyrics? In fact, cat scratch fever is a real disease that people can contract from cats! Let’s take a look at the causes, symptoms, and treatment of what is medically known as cat scratch disease.

Rocking Out GIF from Cat GIFs

What is cat scratch disease and how is it spread?

Cat scratch disease is an infection caused by a bacterium called Bartonella henselae. It spreads when an infected feline scratches or bites a person hard enough to break the skin, or licks a person’s open wound. An infected person can’t spread the disease to another person.

The Centers for Disease Control and Prevention (CDC) estimates that 12,000 people will be diagnosed with cat scratch fever, and 500 people will be hospitalized each year in the U.S. Cases surge both in January—possibly due to increased adoptions of kittens—and in the period between August and November.

How do cats contract the disease in the first place?

According to the CDC, about 40% of cats carry B. henselae at some point in their lives, although most cats with this infection show no signs of illness. It’s usually contracted in one of two ways:

Which cats are more likely to spread the disease?

Kittens younger than 1 year are more likely to carry this bacterial infection; kittens are also more likely to spread the disease, since they tend to scratch and bite more while they play with people. Feral and stray cats that fight with others may also be at increased risk of contracting and spreading the infection.

What happens if a human gets infected?

Typically, cat scratch fever only causes a mild reaction in people. Anywhere from three days to two weeks after someone gets bitten or scratched by an infected cat, the following symptoms may occur:

These symptoms usually clear up on their own. However, some people do need antibiotic treatment—if any symptoms present as severe or seem prolonged, contact your doctor.

Is cat scratch disease ever a serious concern?

Rarely, the disease can cause serious complications to the brain, eyes, heart, or other internal organs. This is more likely to occur in children younger than 5 years and people with weakened immune systems.

Can the disease be prevented?

Avoid petting or touching stray or feral cats, as well as roughhousing with your own cat. If you’ve been bitten or scratched hard enough by a cat to break the skin, wash the wounded area well with soap and running water. Don’t let cats lick any of your open wounds or scabs.

Because cats younger than 1 year are more likely to carry cat scratch fever, people with weakened immune systems should adopt an older cat.

The best way to prevent the disease in your cat includes keeping him indoors so he doesn’t come in contact with strays or ferals that may be carriers. Trim his nails regularly and control fleas by applying a flea product approved by your veterinarian, inspecting your cat regularly with a flea comb, and vacuuming your home often.

Catch scratch fever isn’t a big cause for concern—but it is real. When in doubt, wash your hands after playing with your kitty and keep his claws trimmed. (P.S. We apologize if you find that Ted Nugent is stuck in your head for the rest of the day!) 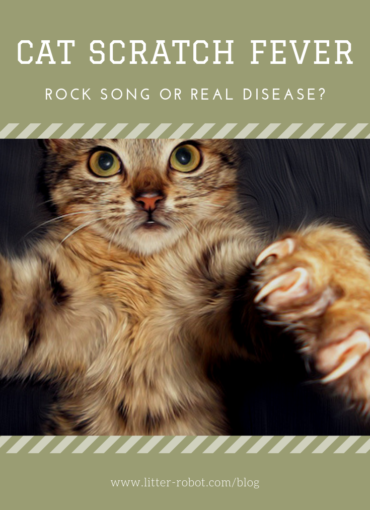