The Cornish Rex cat is striking to behold, largely due to their crimped hairstyle (right out of a 90s magazine). This cat is a delightful companion to share your life with. Known for their curly coats, large elvish ears, and wide, alert eyes, Cornish Rex cats might as well belong in a fairy tale.

Aside from their looks, the Cornish Rex is a playful and loving cat that appreciates a nice cuddle. Their coats help them stand out, but not necessarily in coloring. This is because the Cornish Rex comes in all variations of colors and patterns. Some might argue that this very aspect of their coat makes them unique: every Cornish Rex you see will look different from the next.

Keep reading to learn more about the variety of coat colors the Cornish Rex cat can have. 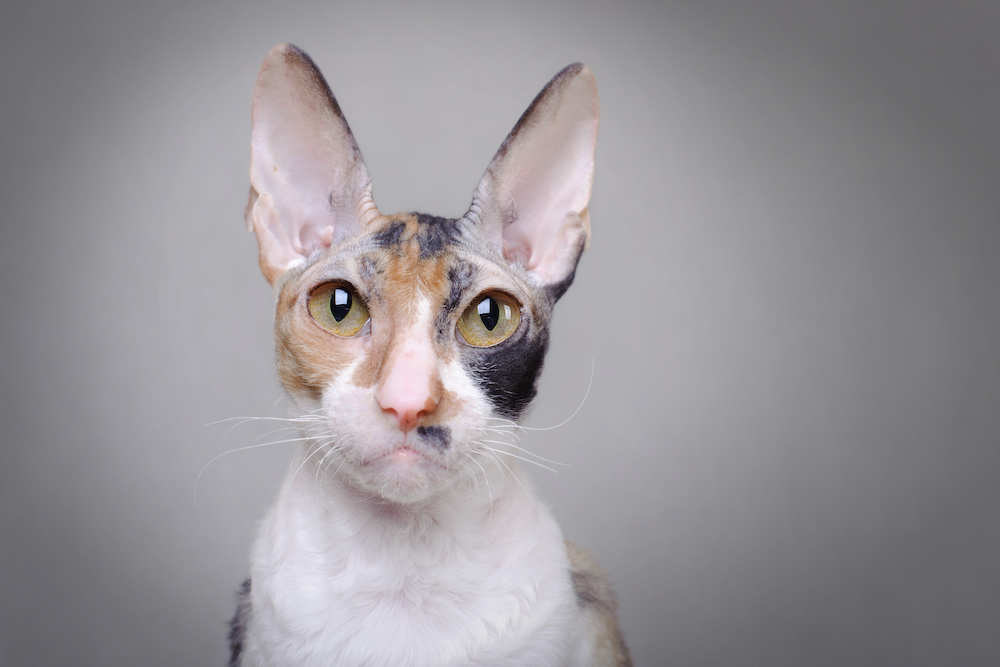 History of the Cornish Rex cat

The Cornish Rex cat originated in Cornwall, England, in the 1950s from a unique genetic mutation that caused one orange and white kitten named Kallibunker to be born with curly fur. Kallibunker also had a longer and more lithe body compared to his littermates.

Nina Ennismore looked over the litter of barn kittens and immediately noticed Kallibunker and his remarkable coat. Nina contacted a geneticist who advised her to breed Kallibunker back to his mother. Two curly-haired cats were born; from there, these cats were selectively bred to produce the curly-haired gene more consistently until it became the staple of this new breed.

Cornish Rex cats were different from other breeds because of their curly hair, long, lean bodies, and large facial features. Now, these cats are very popular and intriguing pets, beloved by many.

The Cornish Rex is a small-sized cat that doesn’t usually grow heavier than 10 pounds (6 to 8 pounds being more likely). They resemble alien-like creatures with curly coats, large eyes, large pointed ears, and a very slender body.

A Cornish Rex has these base features to help distinguish them from other breeds, but their coloring can come in various styles, making every Cornish Rex cat one of a kind. In just one litter, you’ll have no idea what to expect.

What colors do Cornish Rex cats come in?

The answer to this question is simple: every color combination out there! Cornish Rexes come in a wide variety of colors and patterns. Some classifications that a Cornish Rex might fit into are solid, bicolor, calico, tabby, smoke, pointed, and tortoiseshell.

No matter what your Cornish Rex looks like, they will always maintain their unique appearance. Their large eyes, large ears, and curly coat aren’t going anywhere. 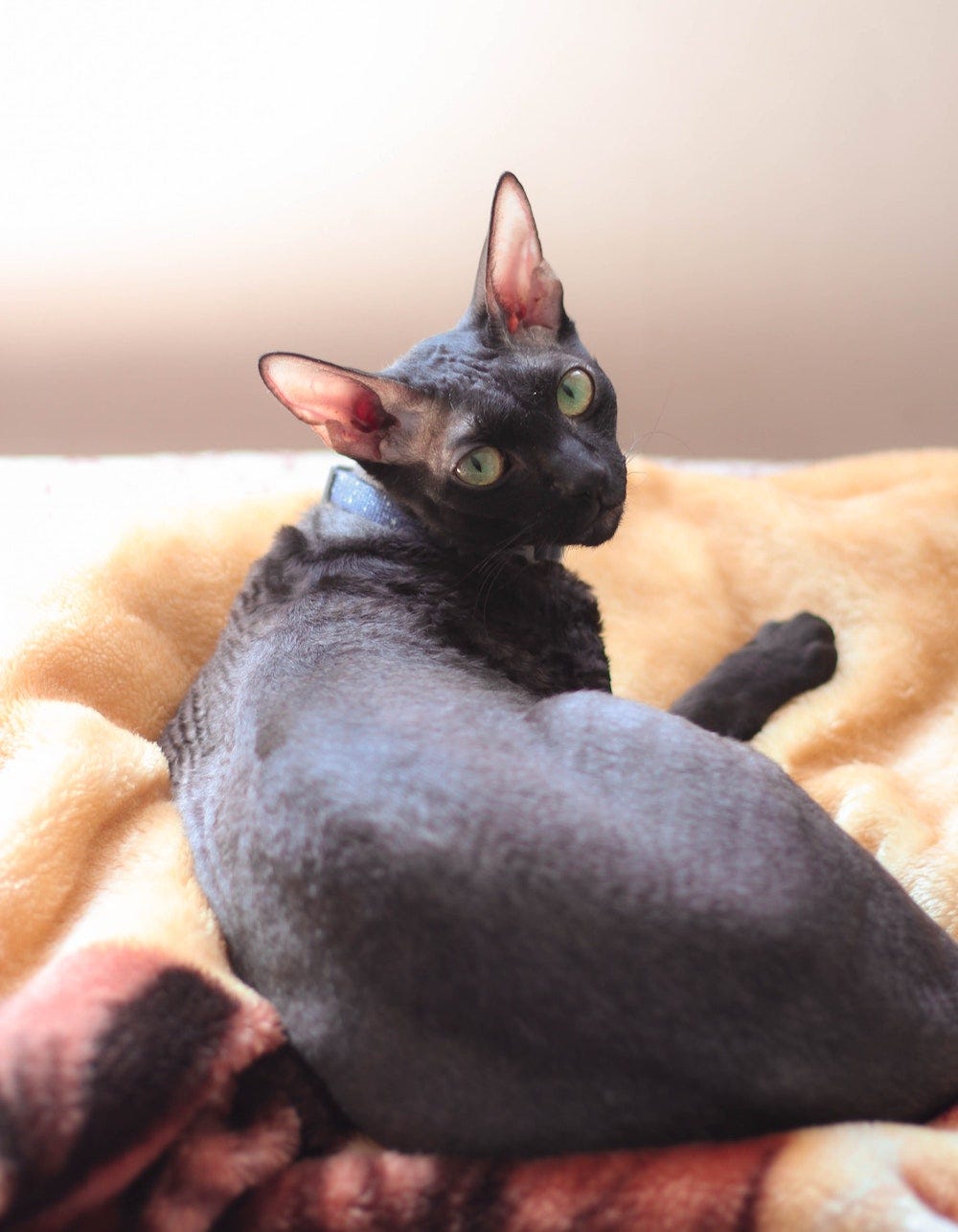 A solid-colored Cornish Rex is a beautiful creature. The most common solid colors you might find are the following: Some versions of tabby coloring are the following:

Usually, a tabby Cornish Rex will have beautiful golden eyes. 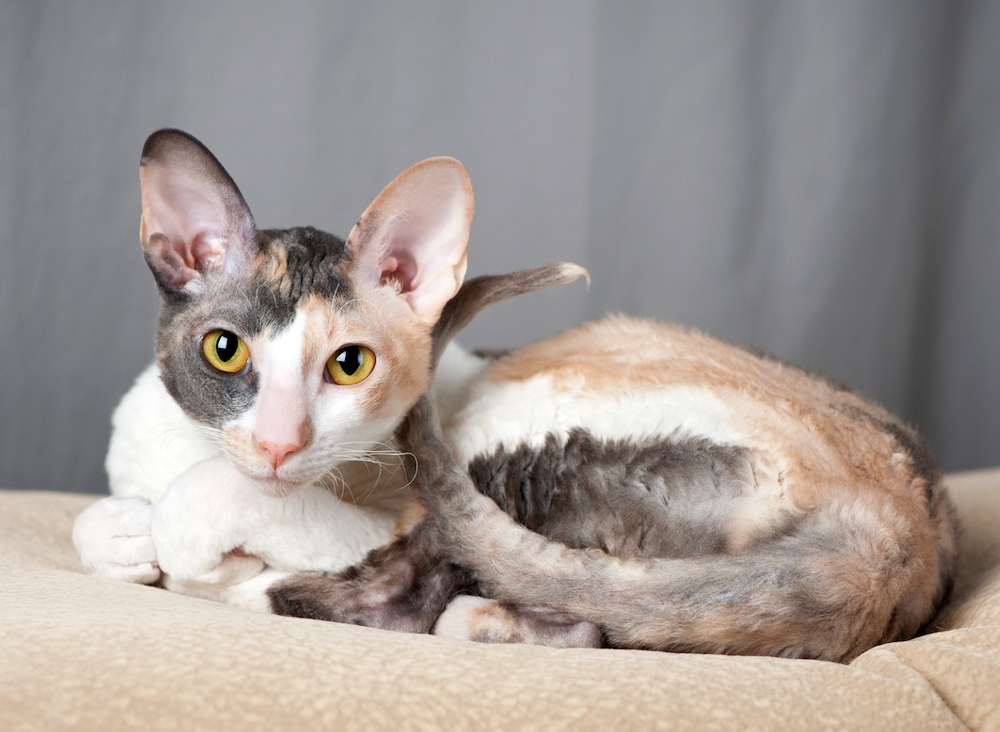 Calico Cornish Rex cats have two defined patches of colors, usually black and red (orange), against a white base color. They will be anywhere between 25-75% white, with their underbellies and legs usually pure white. Their patches might also come in chocolate, lavender, and smokey colors.

Interestingly, calico cats are predominantly female, meaning that if you were to come across a male calico, it’d be quite a rare occurrence. 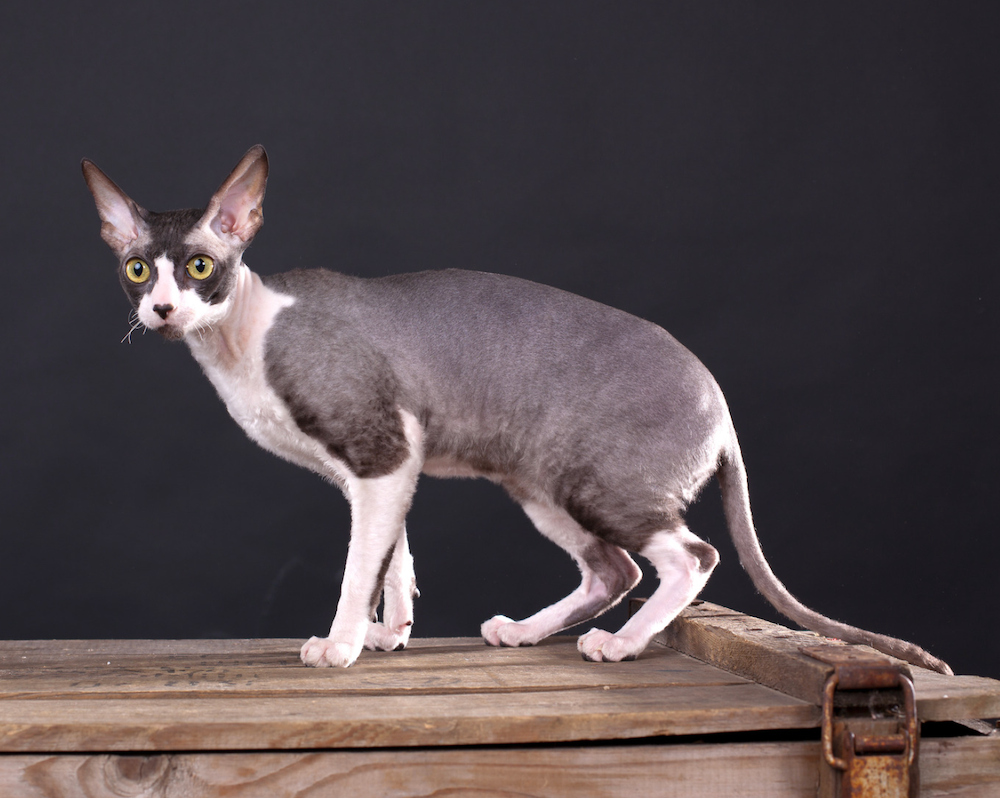 Bicolor cats will likely have white underbellies, legs, and chests, with a different color on top of their backs, heads, and tails. Bicolor cats will either have gold, blue, or odd-colored eyes.

There might be a few tortoiseshell shades, though black and red are most common. You could also see chocolate, blue-cream, and lavender-cream combinations. This patterning is gorgeous and only adds to their allure. On top of these adorable combinations, all tortoiseshell Cornish Rexes will have brilliant golden eyes.

The pointed pattern is when the points of a cat (the face, ears, paws, and tail) are much darker than the body color. Pointed Cornish Rexes are predominantly seal point—a cream-colored body with dark brown, almost black, point coloring.

There is a long list of potential color variations for a pointed Cornish Rex. They could be combined with a solid color, such as chocolate, blue, lavender, red, or cream. Pointed Cornish Rexes could also have tortoiseshell patterning in their points, otherwise known as tortie point. These include all the color combinations as well.

Caring for a Cornish Rex

All of these Cornish Rex coat colors have one thing in common: They are soft, curly, and oh-so-cute. Luckily, grooming requirements for this breed are relatively simple. Their short coat doesn’t shed much; light brushing and occasional baths should do the trick. However, since their coat is so short, they might need a little help staying warm in the winter months.

Your Cornish Rex is going to be playful and fun, so make sure you have plenty of toys around the house for them to interact with. Cat trees and scratching posts are a must—they keep your cat and your furniture happy.

Another way to keep your kitty happy? Provide a self-cleaning litter box like Litter-Robot so they always have a clean place to go to the bathroom. (And you’ll never have to scoop again!)

So, have you inspected your Cornish Rex’s coat yet? Take your best guess at what your furry friend would be classified as and brag to your friends!