How Long Do Cats Live? A Tale of Two Kitties

The factors for determining the average cat’s lifespan are wide and varied: Health, genetics, diet, breed, and whether they’re spayed or neutered are just a few of these considerations. However, the single most important factor that helps us answer the question “how long do cats live?” is the environment.

This is a tale of two average felines—one that lives indoors, one that lives outside. Through the stories of these two particular kitties, we can see just how critical environment is in determining how long cats typically live. (Curious how to convert your cat’s age to human years? Check out our calculator.)

Jones is a domestic shorthair tabby that was adopted from his local shelter as a kitten. For all his nature-gazing and chittering at the backyard squirrels, his family keeps him strictly indoors.

Jones will likely live to be at least 12 years old, and may even pass 20 years of age. Here's why:

Vaccinating your cat is one of the easiest ways to help him live a long, healthy life. Jones was administered all of the core vaccines, which are considered vital to all cats and protect against panleukopenia (feline distemper), feline leukemia virus (FeLV), feline calici virus, feline herpes virus type I (rhinotracheitis), feline immunodeficiency virus, and rabies. Feline distemper was a leading cause of death in cats before the vaccination became standard. Currently, FeLV is second only to trauma as the leading cause of death, killing 85 percent of persistently infected felines within three years of diagnosis.

According to the 2013 State of Pet Health Report, neutered male cats live 62 percent longer than unneutered ones. Spaying and neutering greatly reduces the risk of developing diseases like ovarian, testicular, and prostate cancer. And although Jones stays inside, if he were ever to escape outdoors he would still be safer: Since testosterone triggers strong territorial instinct, by removing it, he will be less likely to fight, roam, spray, or display other hostile behaviors.

He has a healthy diet.

Jones receives a measured amount of both wet and dry food every day. His food is moisture-rich and meat-filled, plus high in nutrients like animal-based protein and fat. He has plenty of access to fresh water (standing in bowls and running from a fountain), so he is rarely dehydrated—a common ailment among cats.

He knows care and maintenance.

With his relatively stress-free environment, Jones is always able to groom himself, avoiding hairball buildups that can have nasty consequences. His nails are regularly trimmed. Jones also has access to a clean litter box like the Litter-Robot. A clean litter box is essential to good cat health in order to help minimize two medical problems: feline lower urinary tract disease or the more life-threatening urinary blockage called feline urethral obstruction.

He regularly visits the vet.

As much as Jones detests going to the vet, his humans know how important an annual visit is. That’s because veterinarians can pick up on medical problems that his humans can’t—and the sooner those problems are treated, the better the prognosis. As Jones ages, his vet will want to do a complete physical examination, paying special attention to weight loss, increased vomiting, bigger urine clumps, and increased thirst; these are all signs of common diseases in older cats such as diabetes mellitus, hyperthyroidism, and chronic kidney failure.

How long do cats live outside? Meet June

June is a domestic shorthair tabby that began to show up as a kitten in a suburban neighborhood during the early summer—a few of the locals affectionately coined her as “June.” To most, she is simply known as a “stray” in the neighborhood.

The first time June got pregnant, she was only six months old. She has since given birth to dozens of kittens. (A fertile cat can produce three litters per year on average, and the average number of kittens in a feline litter is four to six.) As a young cat mother who has spent most of her life carrying, birthing, then providing milk to her litters, she suffers from her own malnutrition and an array of health issues. June wasn’t spayed before she came into heat, so the risk of getting breast tumors, which are nearly always malignant, is greater.

She lacks regular access to clean water and food.

June must rely on the erratic kindness of a neighbor to put out some dry kibble, hunt local wildlife, or raid a garbage can in order to feed herself. Worse, her access to clean water is very limited. She is often forced to drink out of puddles or other stagnant pools of water, which can be filled with bacteria, parasites, and contaminants like motor oil.

She isn’t vaccinated (and there are predators).

Cats—including strays and ferals—are very territorial creatures. Fighting is common and one of the quickest ways to spread disease. Consider some of these scary facts: FeLV is passed from one cat to another through saliva, blood, and to some extent, urine and feces. Kittens can contract the disease in utero or through an infected mother’s milk. The disease can also live in food and water bowls for some time. What’s more, in 2015, the CDC reported that there were 244 cases of rabid felines in the U.S. Rabies in cats is always fatal.

She is exposed to traffic and the elements.

The deadliest predator of all—humans—accounts for hundreds of thousands of feline deaths each year just by getting behind the wheel. Although there are no official statistics for the U.S., trauma remains the leading cause of death in cats. And if it’s not the traffic June is dodging, it’s the weather. She faces long, cold winters, flooded springs, and searing summers—all while trying to protect her kittens from those same elements. The “wear and tear” of being an outdoor cat is intense, to say the least.

She may end up at a high-intake shelter.

One of the neighbors may finally take pity on June, trap her, and deliver her to a shelter. Unfortunately, the number of high-intake shelters across the U.S. far outweighs the number of no-kill shelters. This means a stray like June will likely be euthanized. According to ASPCA, 860,000 shelter cats are euthanized in the U.S. every year.

What about cats that live indoors and outside?

Some people wistfully proclaim that cats that live indoors and outside have the best of both worlds. While this may be true in a philosophical sense, the statistics still point toward an indoor-only lifestyle as being the surest way to longevity. It’s simple math: Merging the average lifespans of Jones and June gives us a range of 7 to 16 years. The long end of this is good… the short end of it is disheartening.

Perhaps now you understand that “how long do cats live?” usually becomes a question of environment. If you’re thinking about adopting a kitty, do everyone a favor and keep him indoors. Not only will he likely live a longer life, he will undoubtedly live a happier one.

Regardless of how long your cat lives, prioritize their care with an automatic litter box. 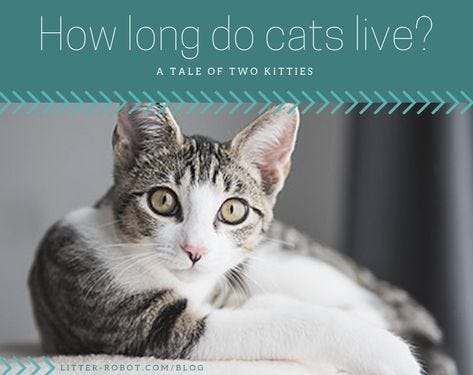