The beautiful Burmese cat is unlike any other. With their expressive eyes and distinct ears, you can often recognize a Burmese cat when you see them. They always seem to be alert and attentive to your every move (because they are).

The Burmese is a lively and loving cat that looks to make every day a good day. They will stay playful and energetic through the years while also remaining a devoted companion. These cats are searching for true friendship and love. If you can offer them your time, you will be amazed by the Burmese cat!

If you want to learn more about how great the Burmese is, keep reading to get a full breed profile on these lovable kitties.

Overview of a Burmese cat 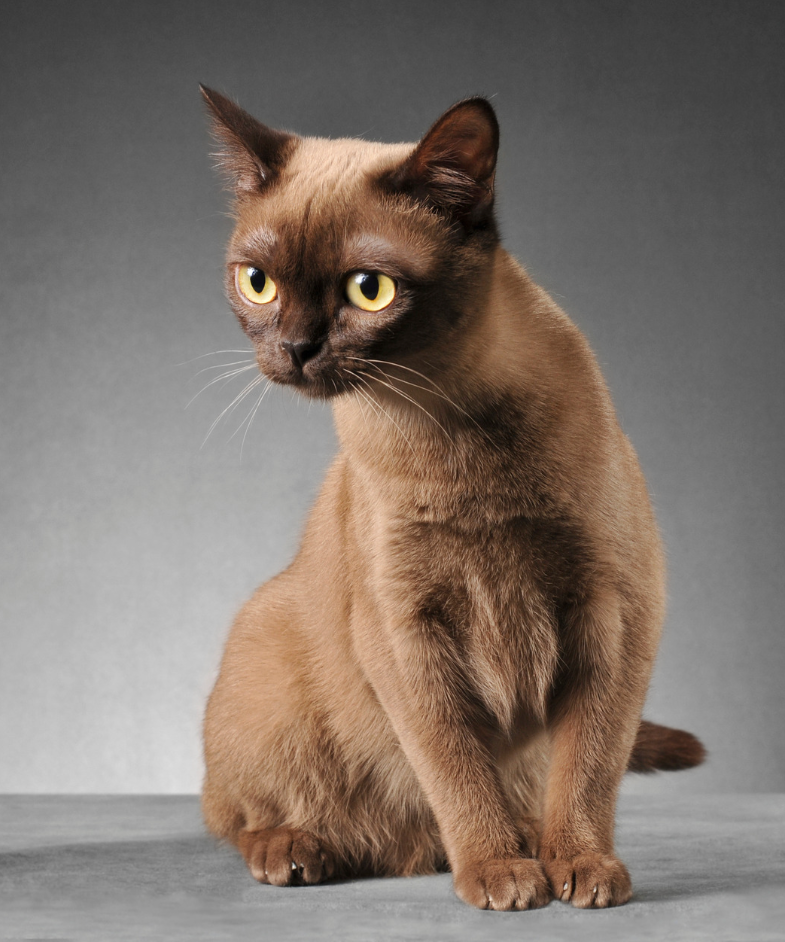 Though medium in size, the Burmese cat is compact and well-proportioned. They typically are heavier than they look, and you’ll be surprised the first time you try to pick up your Burmese (if they allow it). Their bodies are solid and muscular with a large, round head and thick, straight tail.

As mentioned above, Burmese cats are medium-sized. These furry friends can weigh anywhere between 6 and 14 pounds. Males tend to be on the larger side, but your cat’s weight will vary depending on activity levels, genetics, and nutrition. Burmese cats are very muscular, which adds to their weight. Their sleek, short coat gives them a smaller appearance.

Due to their compact nature, Burmese cats don’t have any exaggerated features, like a long slender body or tail. Instead, they are very proportionate. In this case, that makes them average in size. Most Burmese cats can reach up to 18 inches in length, from their heads to their tails.

A Burmese cat’s coat is sleek, shiny, and smooth—almost satin-like in texture. It’s a shorthair coat that you will find yourself aimlessly petting while curled up reading a book on the couch. Burmese coats are very straight.

A Burmese cat’s four common coat colors are sable (dark brown), platinum, blue, and champagne. These cats will have golden eyes to accompany their elegant coats, only adding to their expressive features.

Burmese cats are generally healthy cats that can stay by your side for almost two decades. Their life expectancy is typically between 12 and 18 years when properly cared for. These cats are playful, so they love to be active. The Burmese really does enjoy a good meal, so proper nutrition is essential.

History of the Burmese cat 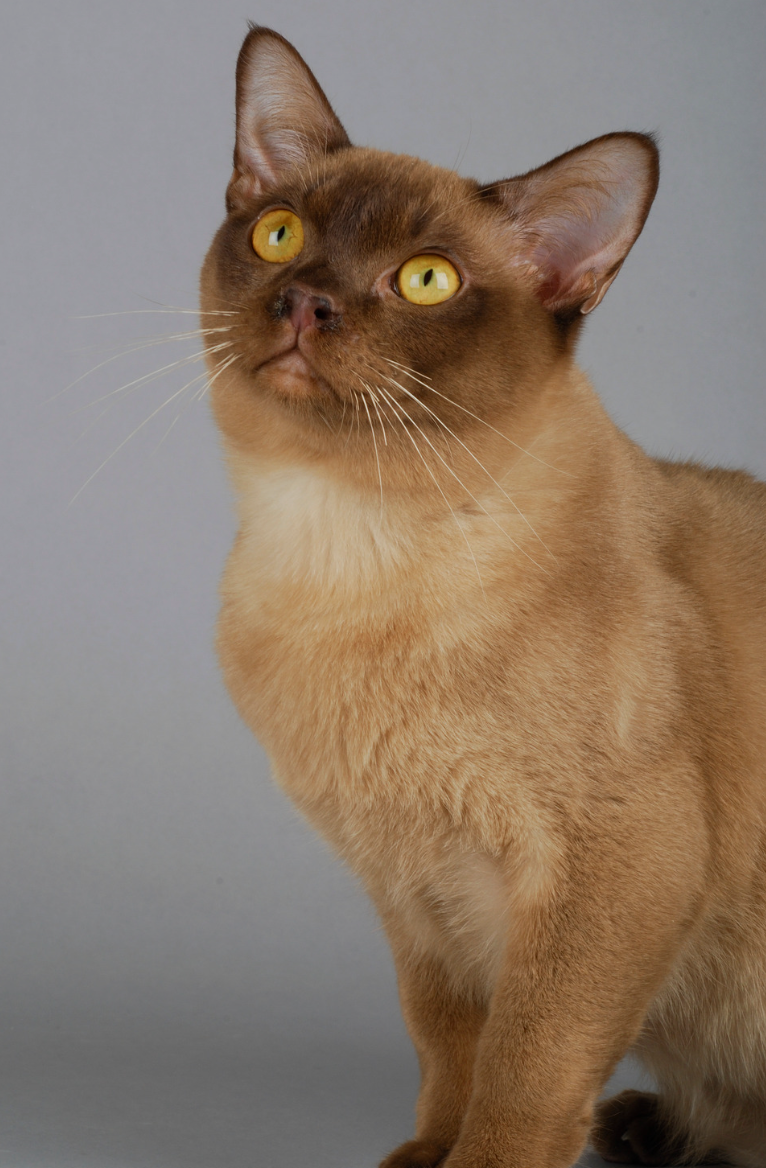 This breed of cat was considered sacred and worshiped for centuries in temples across Burma (modern-day Myanmar) as embodiments of gods and goddesses. The Cat-Book Poems (estimated to have been written by Siamese monks between the 14th and 18th centuries) depicted these “copper” cats, which only solidifies their distinction from the Siamese breed and helps them stand apart.

The Burmese cats of today can be traced back to 1930. A cat from Burma was brought to America by a sailor. This cat was given to Dr. Joseph Thompson of San Francisco and named Wong Mau.

Wong Mau was a walnut-brown cat with darker points, similar to a Siamese with a shorter and more compact body. Dr. Thompson was taken by her beauty and uniqueness, so he set off to help establish this brown female cat’s breed with geneticists and breeders. Wong Mau was bred with a seal point Siamese cat named Tai Mau.

The kittens that were born were split. Half looked more closely like Siamese cats, and the other half resembled Burmese cats. Wong Mau was mated with her son, who looked like a Burmese. The kittens that resulted from this were born in various colors. These Burmese kittens became the foundation for the breed.

The Burmese breed itself became the foundation for many other breeds, such as the Burmilla and Bombay.

The International Cat Association acknowledges many additional colors, including:

All associations agree that the head should be round with full, round, wideset golden eyes. They also agree that Burmese cats’ bodies should be compact and round with good proportions. 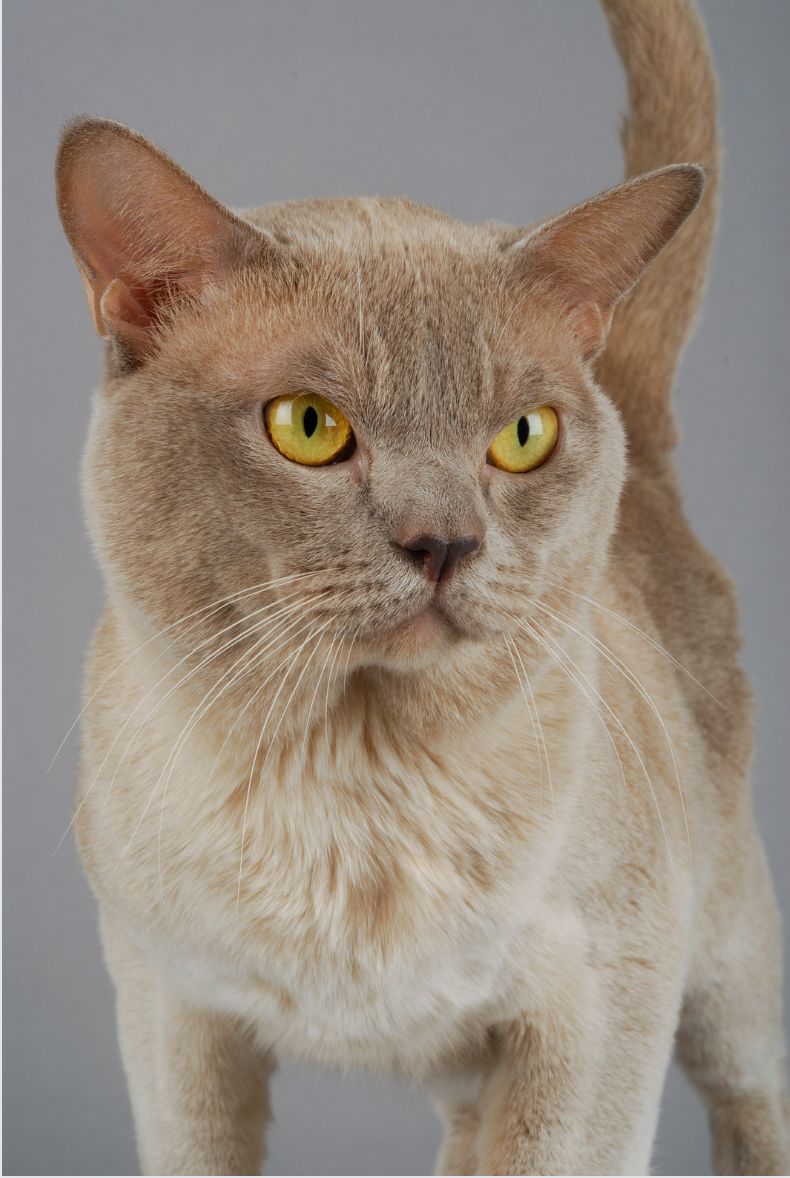 The appearance of a Burmese cat stands out, regardless of color or size. They have alert and wide ears and eyes that are very attentive. Their ears stand straight up and point forward, ready to hold on to your every word.

The eyes of a Burmese are typically golden, yellow, or sometimes green, but they are always round and watchful. Their striking eyes always seem to complement their coats perfectly. This sleek and elegant match makes these friendly cats all the more appealing.

The Burmese is a silly, sociable, and loving lap cat, despite their stark appearance. Yes, these cats might always seem like they are spying you, but it’s with a loving gaze! (We promise.)

They really just want to know what you’re up to and if they can be involved. They are all about interactivity, so you should be prepared to spend lots of your time hanging out with your Burmese. They love to play and learn tricks, but they want you to be part of the fun.

These cats are determined and intelligent, so you’ll be highly entertained. If it ever gets too quiet in the house, it might mean trouble is lurking. Burmese cats like to show off, too. If they’re getting into something, they want you to find them and give them attention. They often make daring leaps and pull tricks on their humans to get a good laugh out of everyone else.

Despite being playful and energetic, the Burmese cat is loving and devoted. Female Burmese are curious, active, and thought to be overly emotionally involved with their humans. Male Burmese cats are devoted but more moderate in their temperament. They might get some pets from their people and then curl up in the sun or a nice cat tree.

Caring for the Burmese 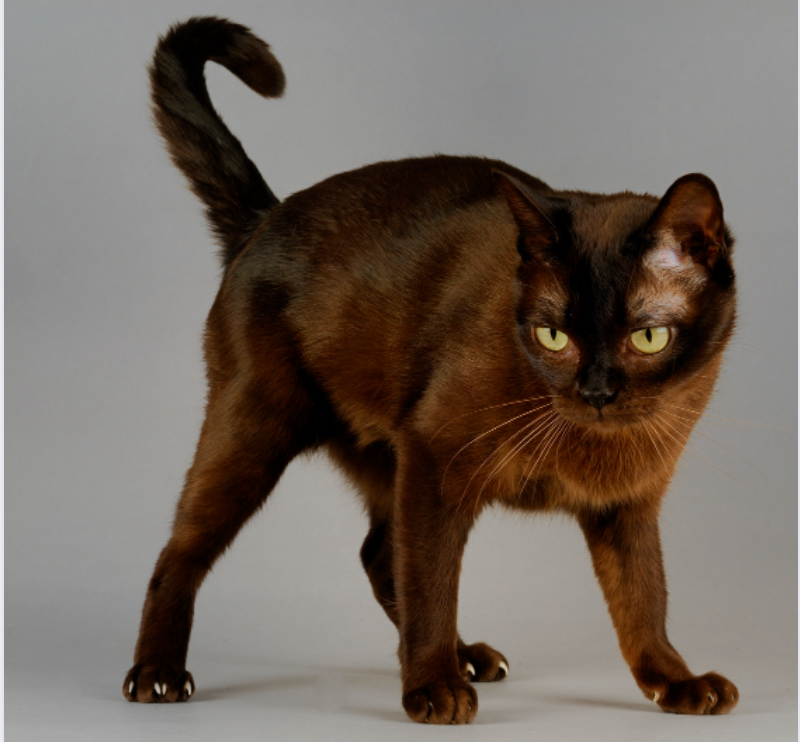 Grooming a Burmese cat is not all too difficult or time-consuming. They have short, silky fur that maintains itself pretty well. Weekly grooming will help to keep it neat and clean and should save your furniture and clothing from becoming overloaded with fur.

These cats are often considered “dog-like” because of their playful energy. They will need lots of exercise and proper nutrition to stay healthy, maintain their weight, and fulfill their mental stimulation needs.

Burmese cats are used to being worshiped, so don’t forget that they have expectations. They want a nice and tidy litter box area that is well-kept so that they don’t have to step on any old clumps. To make this easier, you can try a self-cleaning litter box like Litter-Robot 4. You won’t be rushing around to make sure it’s clean after every use. You can sit back and relax!

Additionally, Burmese cats can develop separation anxiety if they aren’t spending enough time with you. They yearn for your attention, so make sure you have plenty of love to give.

By taking your Burmese cat to the vet for regular check-ups, you can help ensure that your cat stays healthy and happy. The Burmese cat is susceptible to developing health conditions such as orofacial pain syndrome or an inherited disease called hypokalemia, which causes skeletal muscles to weaken. Cats affected by hypokalemia can have difficulty walking or holding their heads up.

European Burmese cats are predisposed to diabetes mellitus, but American Burmese cats don’t tend to share this risk. Both cats are also at a heightened risk of obesity if they aren’t kept active.

Additionally, Burmese cats might develop glaucoma, which is painful pressure in their eyes that can lead to vision difficulty or blindness. They may also be born with cranial deformities. If you are getting a Burmese from a breeder, you can ask for genetic testing to see if some of these health problems are present.

The Burmese cat is not only highly regarded by breeders all over the world, but they also make for great family pets that will stay playful and devoted to you. When you take in a Burmese cat, you will get to experience what it means to have the “best cat ever.” You’ll never be bored, and you’ll always have someone waiting for you when you come home.

If you think you can handle giving all your love and attention to this lovable cat, then we say go for it. Be prepared to run out of phone storage with all the adorable cat photos, though!