Paired with a colorful coat, a lean muscular body, and high levels of intelligence, the Abyssinian cat will keep you on your toes. This breed of cat is extremely inquisitive and performative, so you will find yourself laughing often and closing many cupboard doors. If you’re looking for a low-key and docile cat, you won’t find that in the Abyssinian.

The Abyssinian is not an overly large cat, which makes climbing and mischief-making a lot easier (as well as a lot sneakier). These cats need stimulation throughout the day and enjoy entertaining their family members, awarding them the reputation of class clown.

If you want a lively, intelligent, elegant, and affectionate kitten, the Abyssinian has likely crossed your mind. Can you handle this high-spirited feline? Keep reading to find out if the Abyssinian cat is right for you.

Overview of an Abyssinian cat 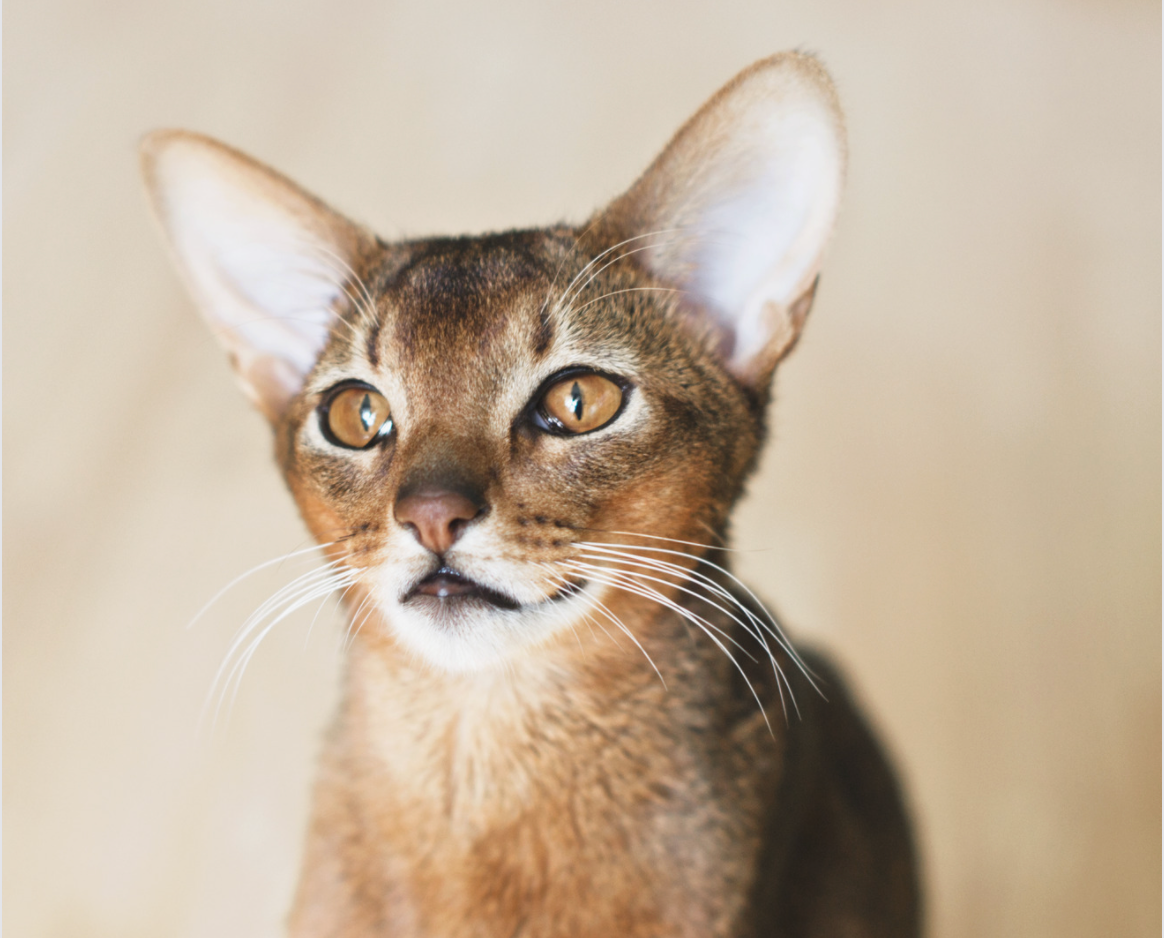 The Abyssinian cat is considered a small to a medium-sized cat. They have long, slender, and muscular bodies, but their light weight makes them agile and quick.

Though small, their personalities are very large; they’re the center of attention in their households. This cat might look like a mini-mountain lion slinking around your house, but fret not! It's just your Abyssinian.

The lightweight Abyssinian cat has high activity levels and doesn't spend too much time lying around. A female Abyssinian cat will typically weigh between 6 and 8 pounds, while a male is 7 to 10 pounds.

The Abyssinian is quite long and slender, appearing larger than they actually are. Most Abyssinian cats will range from 12 to 16 inches long from the tip of their nose to the end of their tails.

The Abyssinian coat is medium-short in length and dense to touch. It is very soft and fine and comes in a few different coat colors. Their ticked tabby coat is known for its ruddy or red coloring, but they can also be chocolate, cinnamon, blue, lilac and fawn.

The eye color of an Abyssinian will usually be gold or green, a beautiful contrast from their coats.

The Abyssinian cat is generally a healthy breed and easy to care for. They stay active and have a hearty appetite, which helps to maintain their weight. With proper care and nutrition, they can live between 9 and 15 years.

History of the Abyssinian Cat 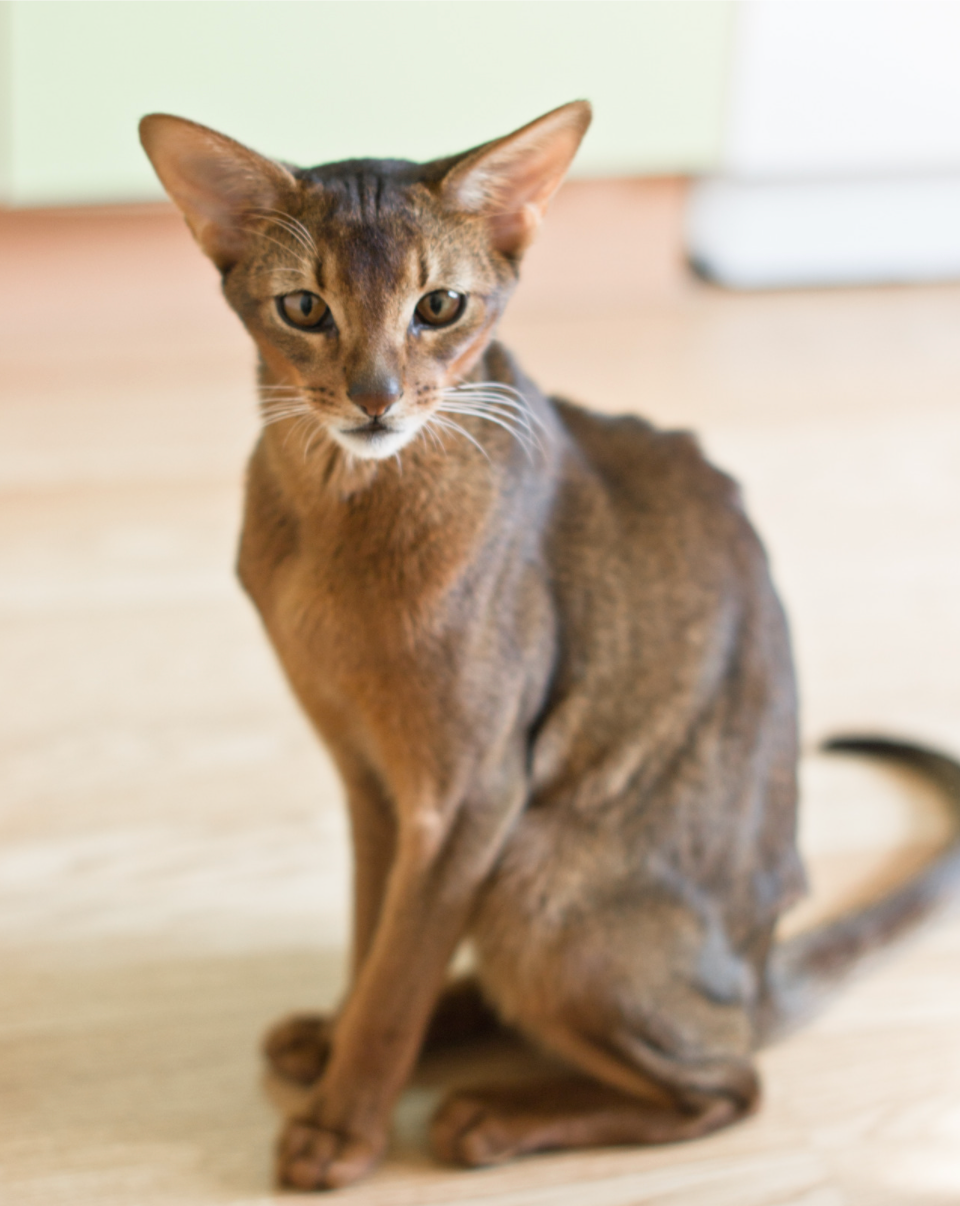 Like many ancient cat breeds, it’s difficult to pinpoint when the Abyssinian cat that we know and love today originated. There are several legends and lores around this breed, so it’s up in the air.

Based solely on their names, it’s possible that they originated in the country Abyssinia (now Ethiopia) and were the cats depicted in ancient Egyptian hieroglyphics. These cats were thought to be the manifestations of gods and goddesses and were favored by the pharaohs.

While they look similar, there is no written documentation showing further similarities between the cats depicted in hieroglyphics and the current-day Abyssinian. Other people believe that the cat was created in England by breeding silver and brown tabbies.

Some genetic testing has reasoned that the Abyssinian cat breed’s ancestors likely came from the coastal regions of the Indian Ocean, brought over by British and Dutch traders. Other accounts say that British soldiers in the 19th century brought them back from North Africa in the Abyssinian War.

Like many other cats, the Abyssinian breed was almost decimated during World War II, and British breeders worked to save the breed. When the cat was transported to the United States, they flourished and gained popularity.

Today the Abyssinian breed is very popular and well-loved by families all over the world. If you’re up for a lively and fearless cat taking over your home, this might just be the kitty for you.

The Abyssinian cat appears relatively slender, with thin-boned legs and a short coat. They have long tails that are the same length as their bodies, which adds to their long and lean wildcat look.

Abyssinian cats have wedge-shaped faces with bright green or gold almond-shaped eyes. They have semi-large ears that are pointed and alert at all times. This adds to the illusion that they are constantly listening to your every move, and well, they might be.

Looking for a family friend for your cat? The Somali cat has the same genetic stock but sports long hair. 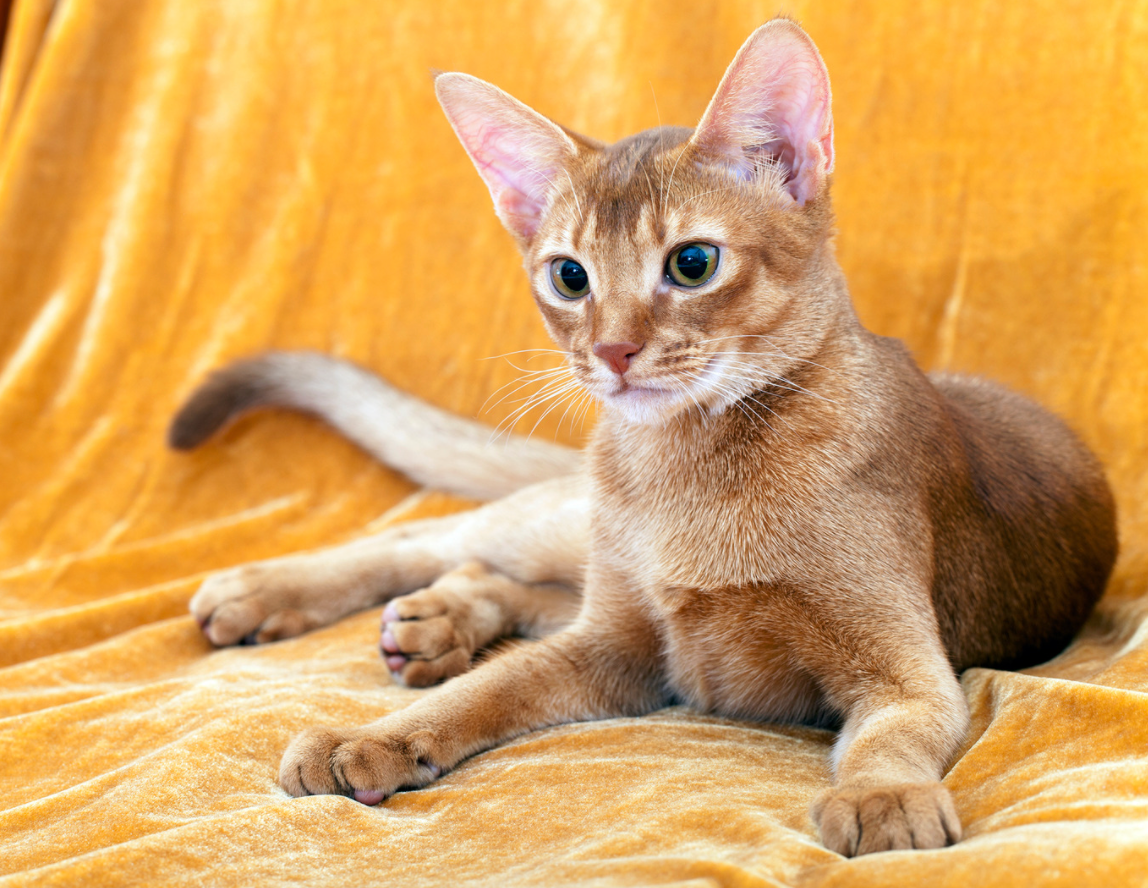 The Abyssinian is a curious breed that relishes their independence. They are friendly and affectionate (when they want to be) but find ways to entertain themselves throughout the day. They can get into trouble, driven to look in every nook and cranny in your space.

These cats can get along well with other animals and prefer to have another cat or cat-friendly dog in the house. They want to play and interact with those in their space, so finding a friend that matches your Abyssinian’s energy is ideal.

These adorable felines will find the time to slow down long enough to cuddle up next to you on the couch. They might not climb onto your lap or enjoy being picked up, but they will gladly accept pets and scratches.

The Abyssinian cat wants your attention and will do anything for it. They will play games with you, get into your cabinets, and climb to the tallest points in your rooms.

Owning a cat tree or having dedicated perching spots will make your Abyssinian very happy. If you’re looking for a chill and laid-back cat, you will not find that in the Abyssinian.

Though not typically vocal, they will exude a deep purr while receiving pets from a loved one. Similarly, while you are trying to enjoy a meal, your Abyssinian will be very engaged, purring and demanding more of their favorite cat food.

When playtime comes around, they can usually find ways to entertain themselves, but they love when their family gets involved. Pulling a toy on a string, playing fetch, or even just tossing crumpled balls of paper at your Abyssinian will satisfy their activity and attention requirements from you. Puzzle toys are great for the highly intelligent “Abys”. 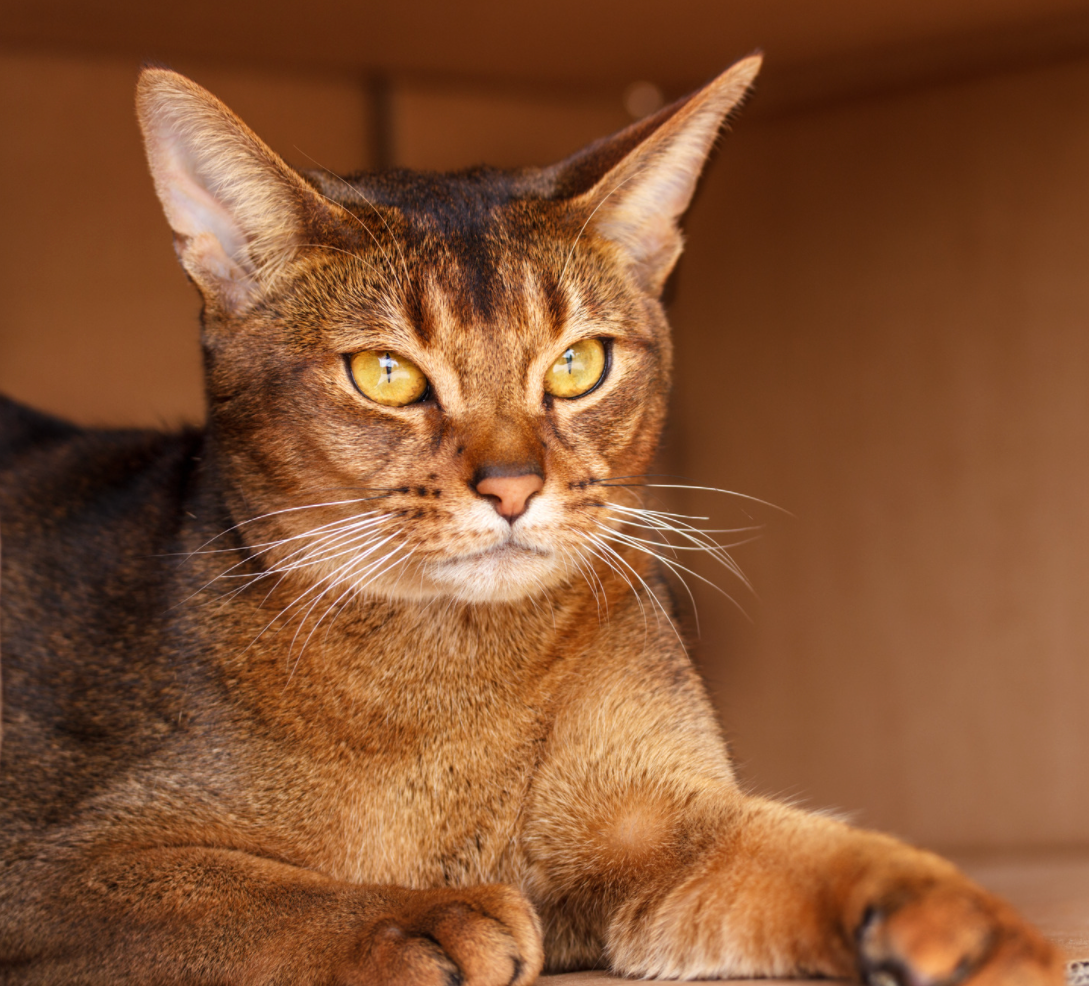 Even though they need a lot of attention and playtime, the Abyssinian is otherwise a low-maintenance cat. They don’t require intense grooming, as their short, glossy coats don’t shed a lot.

The Abyssinian’s ears are pointed, making it easier for dirt and debris to build up and risk infection. You should monitor their ears for signs of infection, including odors and red or inflamed ears. If you see signs of build-up, whether wax or dirt, you can clean their ears with a soft cotton cloth. Avoid using a cotton swab, as this could damage their ear structure.

While the Abyssinian is not as picky as other cats might be, they still prefer a clean litter box. If you can keep up with an Abyssinian, you’re probably a naturally busy or energetic person who can’t be home 24/7.

That’s where a self-cleaning litter box like Litter-Robot 4 comes in handy. Your Abyssinian’s litter box will always be clean for them, and you won’t spend time scooping.

The Abyssinian is generally healthy. They may have endured thousands of years on this planet and can easily adapt to new feats. Still, like any other cat, health problems may arise, so it’s important to know what to look for.

Periodontal disease is very common among cats, but can be treated with brushing at home or dental cleanings at your vet.

Additionally, your Abyssinian cat could face patellar luxation, a condition that dislocates the kneecap. This condition can be genetically inherited or caused by physical trauma, but it effectively weakens the ligaments and muscles around the kneecap. Surgery can be performed to help strengthen the ligaments, but it’s a long recovery process, and keeping your Abyssinian still for that long can be quite the task. A lap cat they are not.

Abyssinians are also prone to anemia from pyruvate kinase deficiency. Additionally, you'll want your vet to keep an eye out for amyloidosis and progressive retinal atrophy.

This domestic kitty has been a cat show favorite since taking third at the First Crystal Palace Cat Show in 1871. They are a winner in the show ring and a winner in our hearts.

Adopting an Abyssinian will bring you lots of fun, playtime, and laughter. If you want a companion that will be loyal and loving to you while also bringing energy and joy to your life, the Abyssinian cat might be the one for you.

When given proper care, love, and attention, the Abyssinian will become a family favorite. Just a heads up: You might need to buy some extra storage for your phone because your camera roll will soon be flooded with adorable videos and pictures of all your Abyssinian cat’s antics! 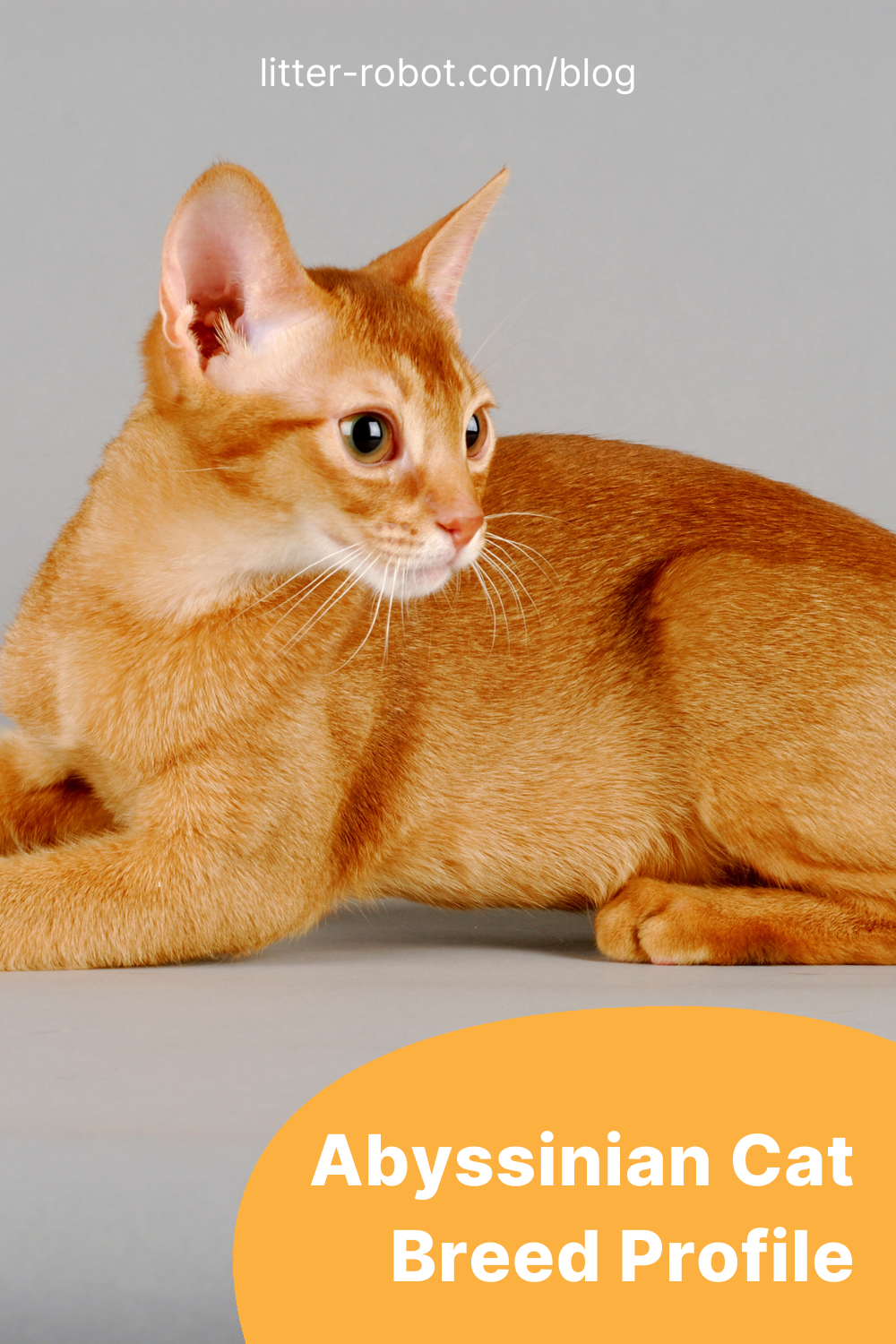