15 Exotic Cat Breeds You Can Adopt

We’ll take any excuse to ogle at cats that look like tigers, leopards, lions, and bobcats. Say you want every day to feel like a visit to the zoo—one where you can cuddle the animals without worrying for your safety. Adopt from one of these exotic cat breeds, and you’ll have just that! 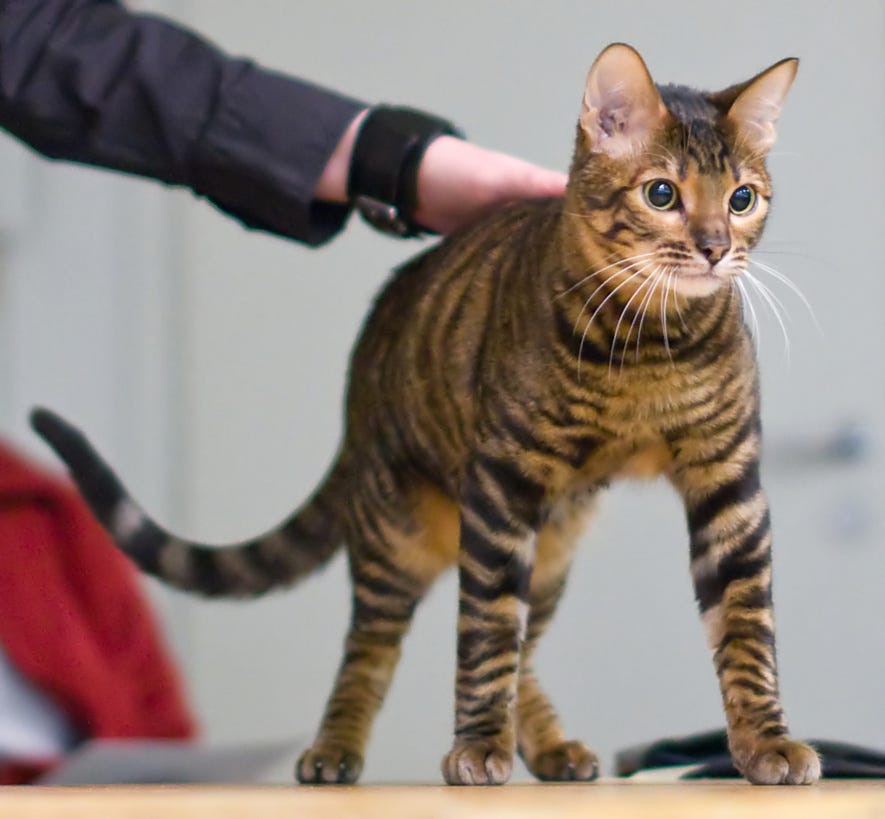 The Toyger may not approve of their punny name, but they sure look dapper with their orange and black stripes. Rest assured, there’s no wild blood running through those veins: The Toyger came about in the 1980s when breeders crossed a Bengal with a striped domestic shorthair.

The Toyger is truly a miniature version of the world’s largest feline, weighing up to 15 pounds. Unlike their ferocious namesake, the Toyger is as friendly and lovable a pet as they come. This high-energy breed can even be taught to do tricks. 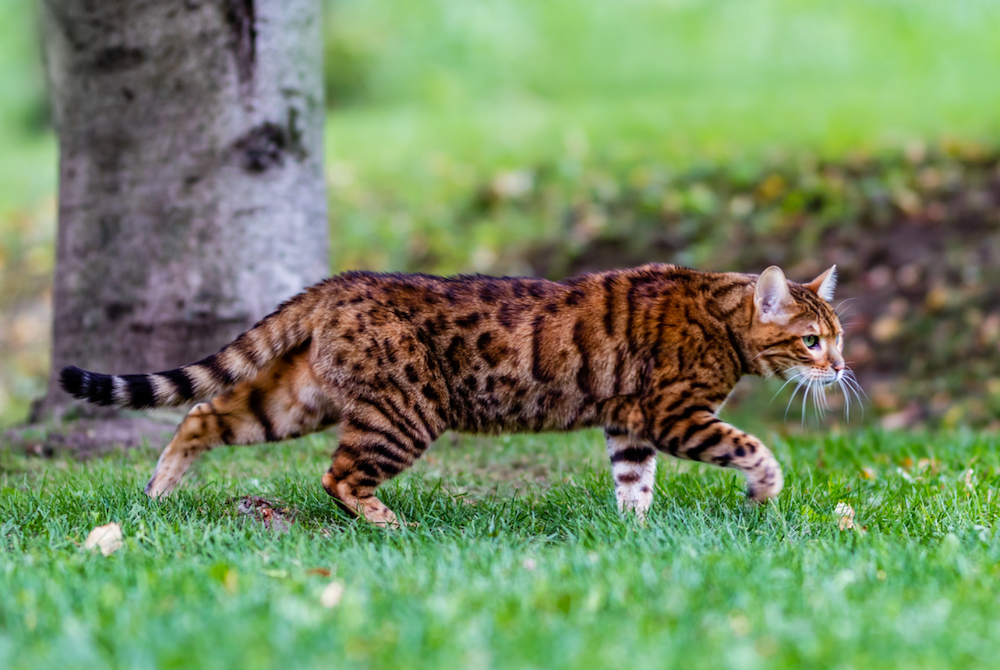 Unlike the Toyger, the Bengal cat has some wild parentage. As a cross between an Asian Leopard cat and a domestic shorthair, the Bengal is impressive in many ways: They are highly intelligent, love to play in water, can learn tricks and walk on leashes, and, best of all, adore their humans.

Bengals are muscular cats and can weigh up to 18 pounds. Their adventurousness and need for attention mean that if you’ve got time on your hands and are looking for a pet that will keep you active and entertained, then the Bengal cat is a great option for you. 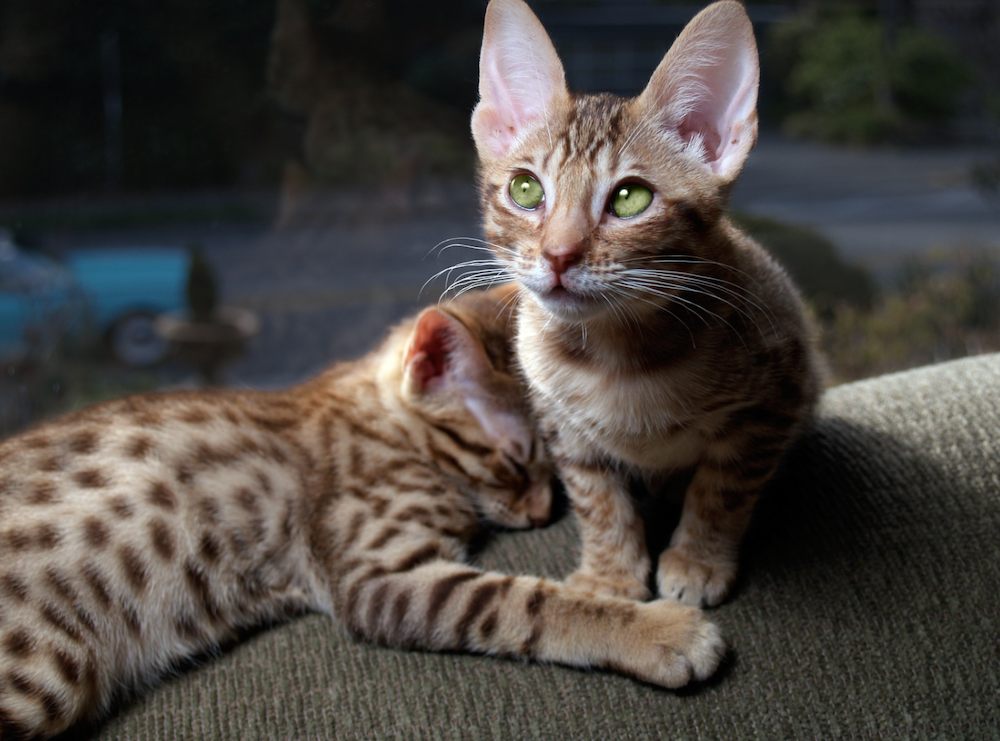 The devoted, energetic Ocicat was created by accident in the 1960s when breeders were trying to develop a Siamese with points the same color as an Abyssinian. They continued to breed the Ocicat after a geneticist noticed their intriguing looks and crossed them with an American Shorthair to introduce more coat colors.

The Ocicat can weigh up to 15 pounds and display a variety of spotted coat colors: Tawny spotted is perhaps the closest in appearance to a leopard. Despite their wild looks, Ocicats are friendly and outgoing. They love to be involved in their humans’ daily lives. 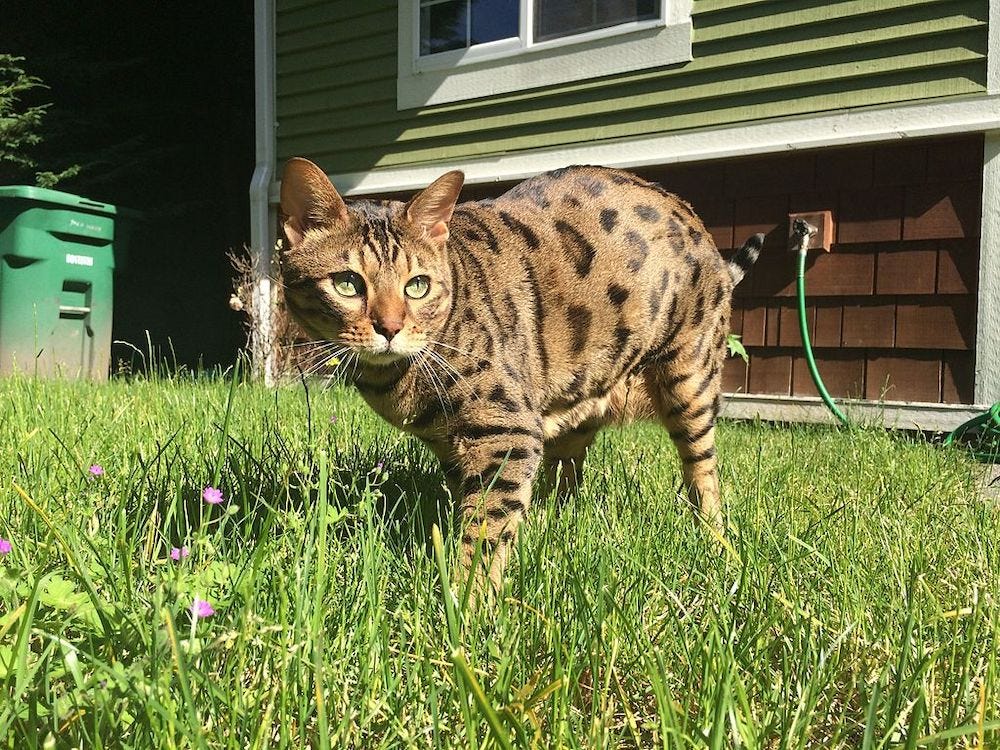 Chester, is that you? The Cheetoh’s parent breeds are the Ocicat and the Bengal. This is a muscular, large cat that walks as though they were stalking prey while on the hunt. Luckily they’re also fun-loving, playful, and full of snuggles.

The Cheetoh is one of the newest cat breeds in existence and not yet recognized by cat associations and breed registries. This uncommon kitty can weigh up to 20+ pounds, one of the largest exotic cat breeds on our list. They are highly trainable and enjoy walking on a leash outdoors. 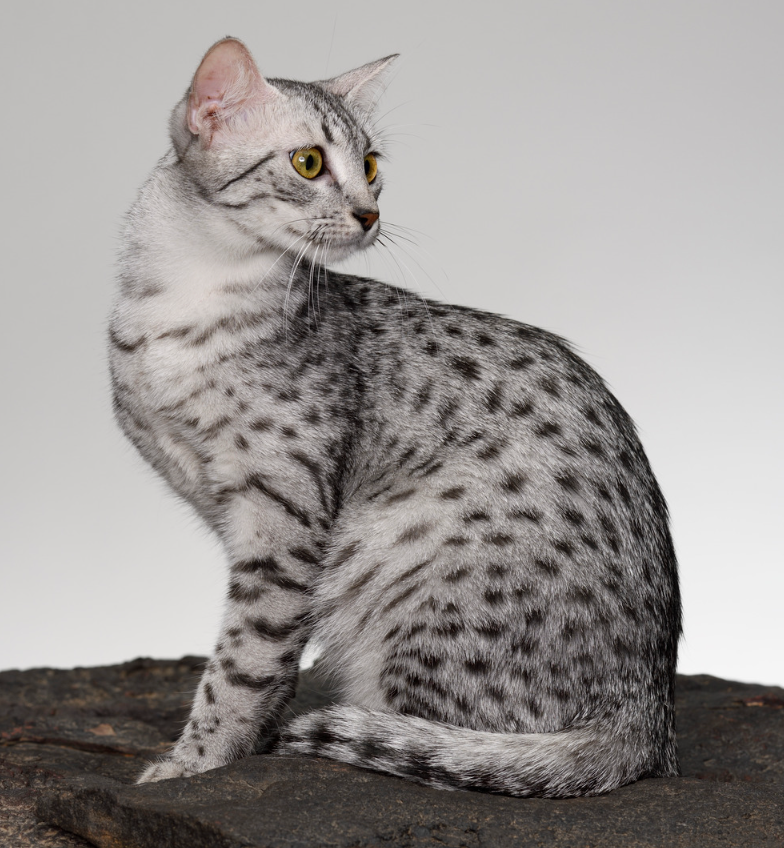 Of all the cats that look like leopards, the Egyptian Mau may be closest to the snow leopard. These exotic cats are the only naturally spotted breed of domestic cat, and can run up to 30 mph! Their ancestors are also highly visible in ancient Egyptian artwork. 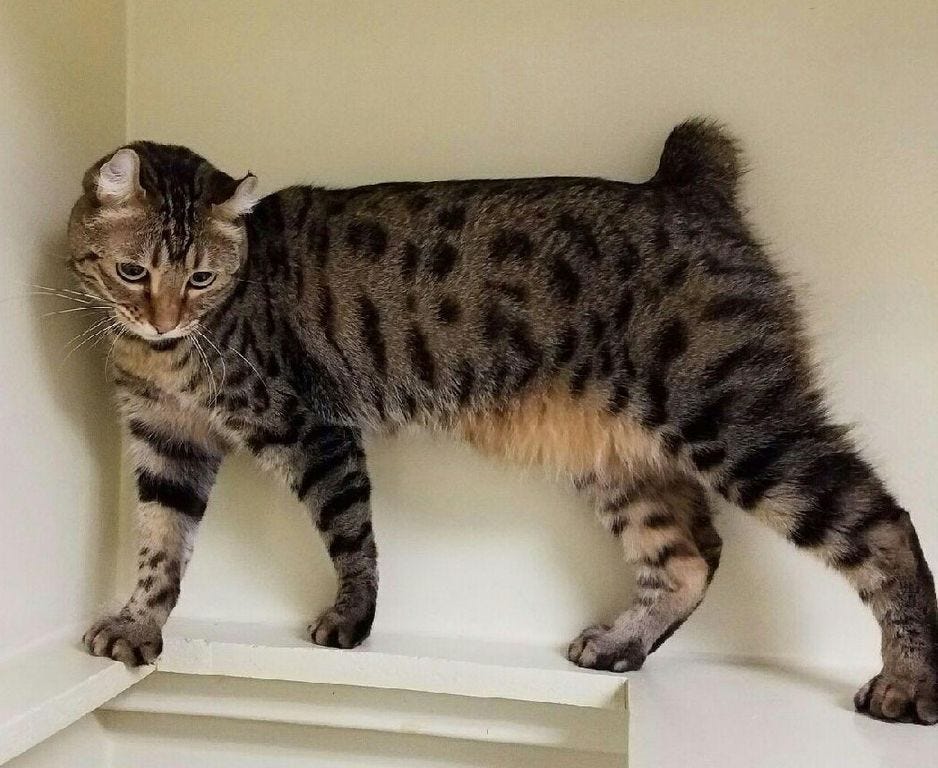 With the Highlander, you get two exotic cats for the price of one. Their spotted or marbled markings bring out the leopard in them, while their bobtail calls to mind a lynx or bobcat. They also have the curled ears of one of their parent breeds, the Jungle Curl.

The Highlander is a playful, energetic cat that can weigh up to 20 pounds. This breed is man-made, having originated as a cross between the experimental Desert Lynx breed and the Jungle Curl. 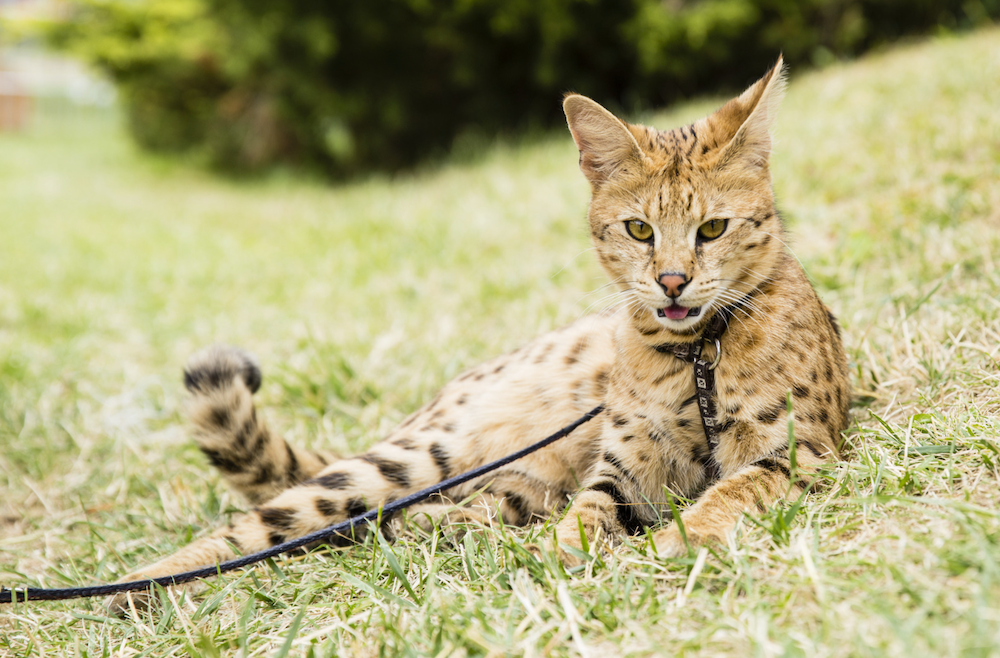 The Savannah cat may be the truest representation of exotic cat breeds. This breed is active, adventurous, and can grow to be 25 pounds. Their hunting instincts are so strong that they may not be suitable for households with pets like fish, hamsters, and birds.

That said, Savannah cats are clever and known for their dog-like loyalty to their humans. This breed resulted from crossing a female Siamese cat with a male African serval—a small wildcat weighing between 20 and 40 pounds. Many U.S. states require that Savannahs be at least four generations removed from their African serval parentage in order to be owned as pets. 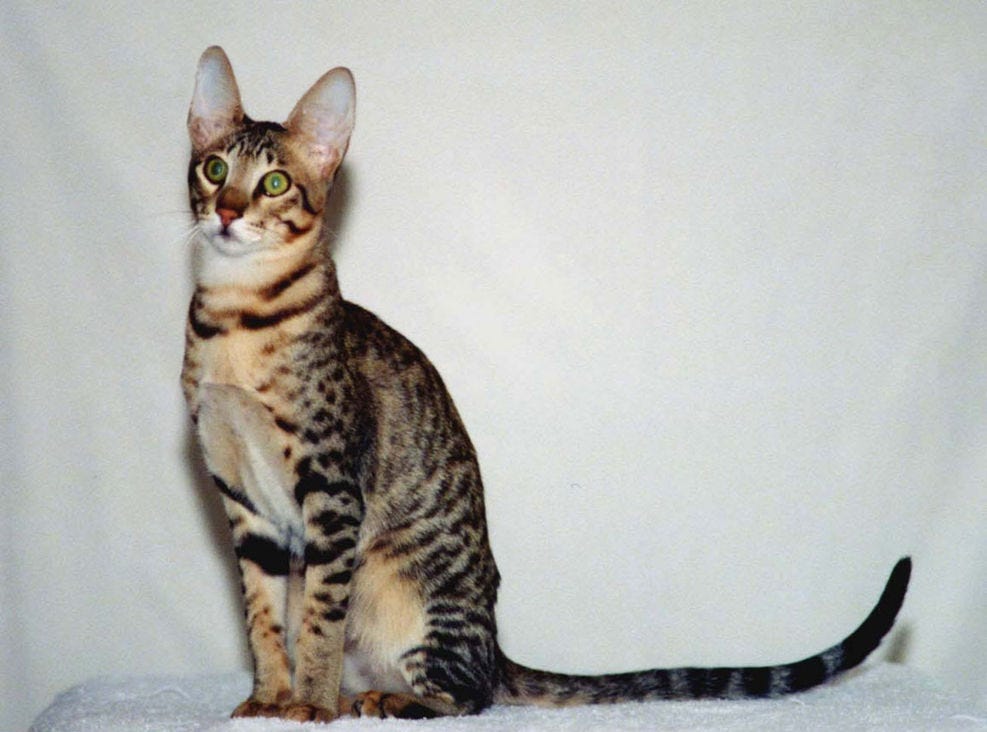 Speaking of African servals, the Serengeti may actually look more like the Sub-Saharan wildcat than the Savannah does. However, the Sergeneti does not have serval blood. This breed was developed by crossing a Bengal and an Oriental Shorthair.

The Serengeti can jump an incredible 7 feet into the air! They may start out as a shy cat, but will quickly adapt as a lovable, extremely playful pet. This breed can weigh up to 15 pounds and is recognized as a preliminary breed by The International Cat Association. 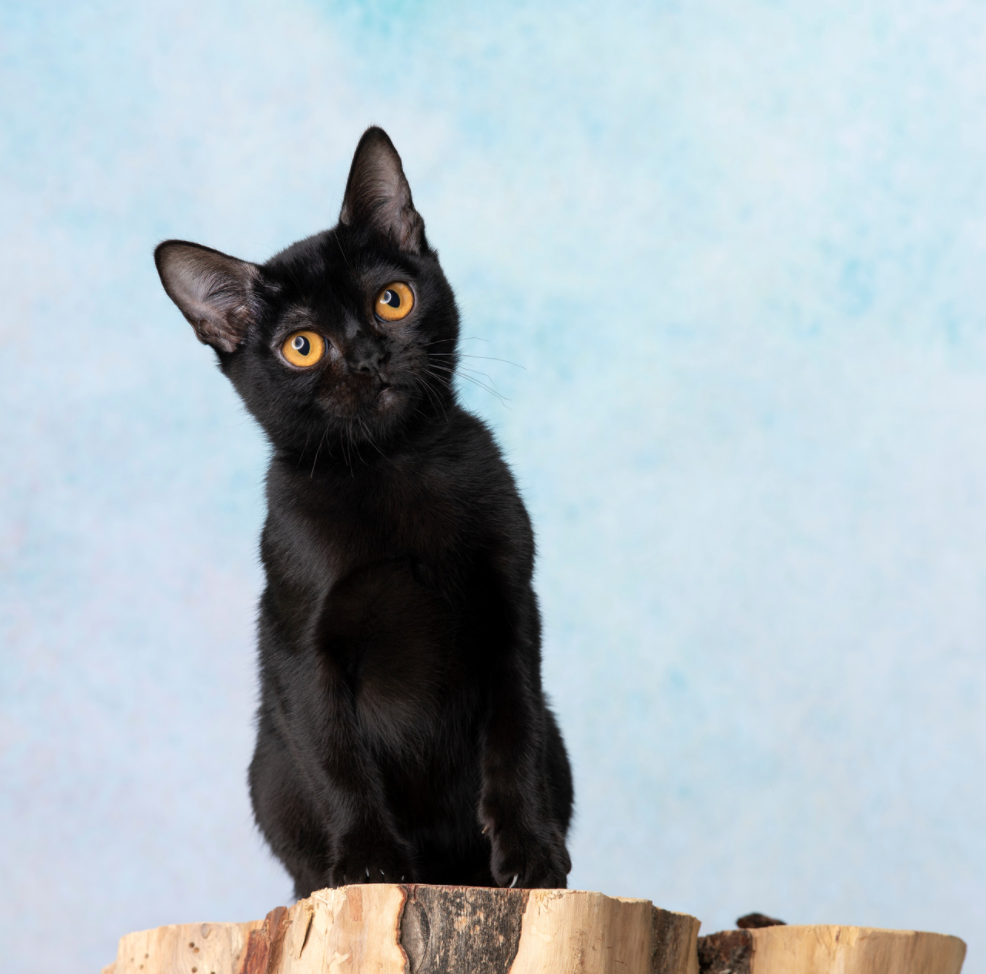 The Bombay cat pays homage to the Indian black leopard. With a shiny, jet-black coat and big copper eyes, they are the epitome of a house panther. The Bombay loves to play and learn tricks, and greets their family and visitors alike at the door.

The Bombay was created to look like a Burmese cat, but with a sleek black coat. Although developed in the U.S., this breed was named after the “land of the black leopard”—Bombay, India. They can weigh up to 15 pounds. These cats are incredibly people-oriented, so if you don’t want a little shadow, the Bombay cat might not be for you. 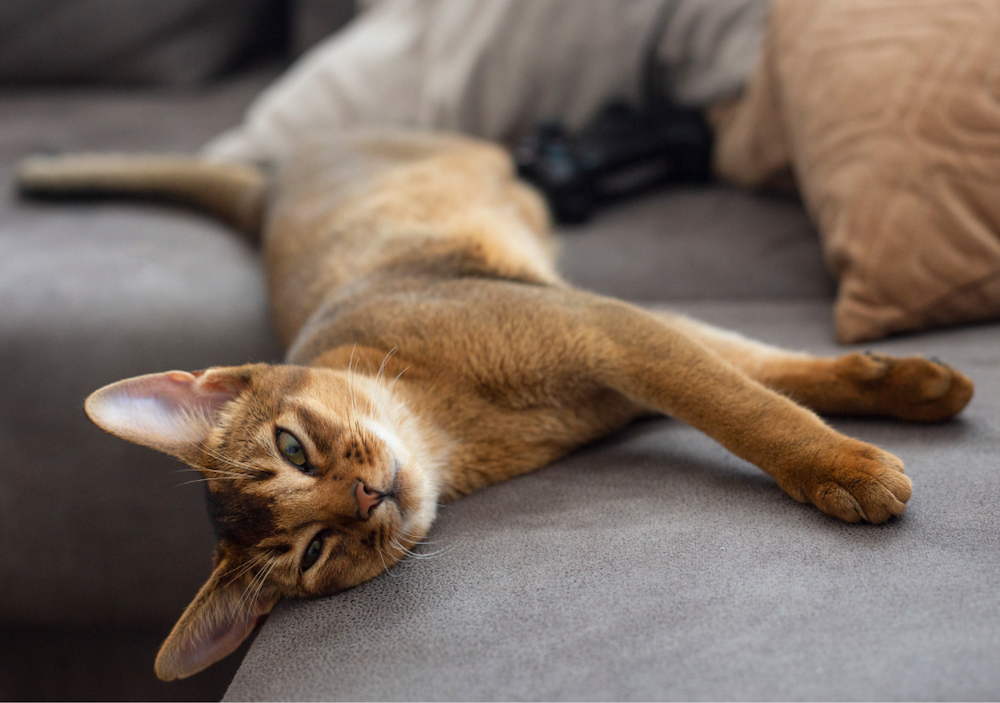 The Abyssinian cat is thought to be one of the oldest breeds of domesticated cats, having possibly originated in old Abyssinia (now Ethiopia) around the time of the ancient Egyptians. And if you saw one slinking through your yard, you’d probably think they were a mini mountain lion! This is thanks to their ticked tabby pattern. They’re very energetic and affectionate, but not a lap cat.

This is a relatively small cat breed, weighing between 7 and 10 pounds. Abyssinians are a curious breed that relishes their independence, while also thriving on attention. They are intelligent and will play games with their humans; they need fun puzzle toys and lots of places to climb. 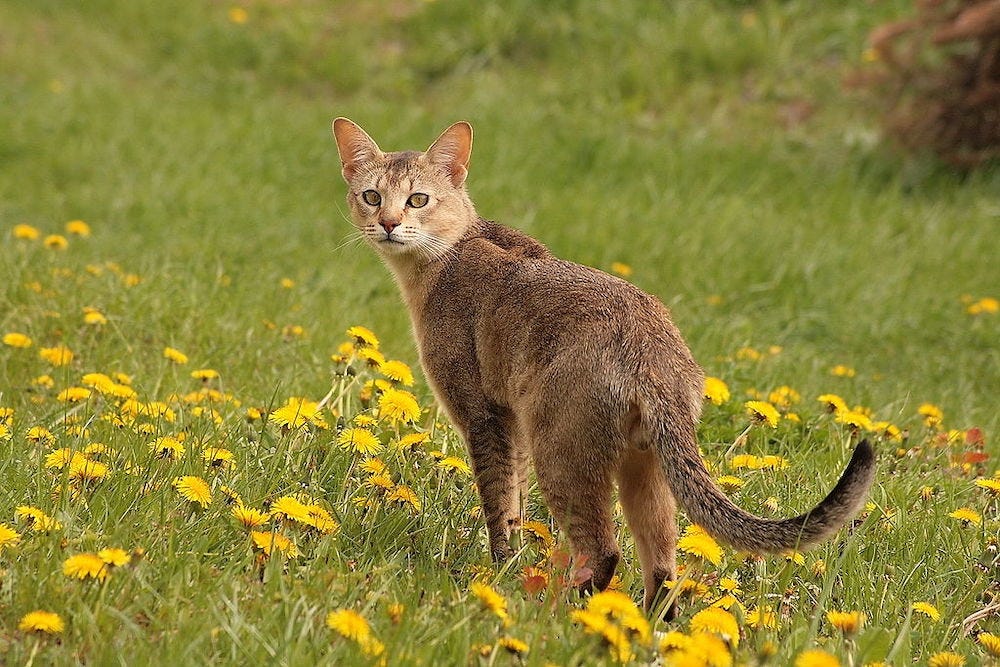 Among cats that look like lions, the Chausie has a strong boast: They were bred from the Jungle Cat. This ancient parent breed is thought to have been domesticated by the Egyptians, and has even been found mummified in Egyptian tombs. In fact, “Chausie” is actually derived from the Latin name for Jungle Cat, felis chaus.

The Chausie cat can grow large, up to 25 pounds. Small for a lion, sure, but big enough for a domestic housecat to make you blink. This breed loves to meet new people, walk on a leash, and even learn to play fetch. Lion, dog, or some combination thereof? You decide. 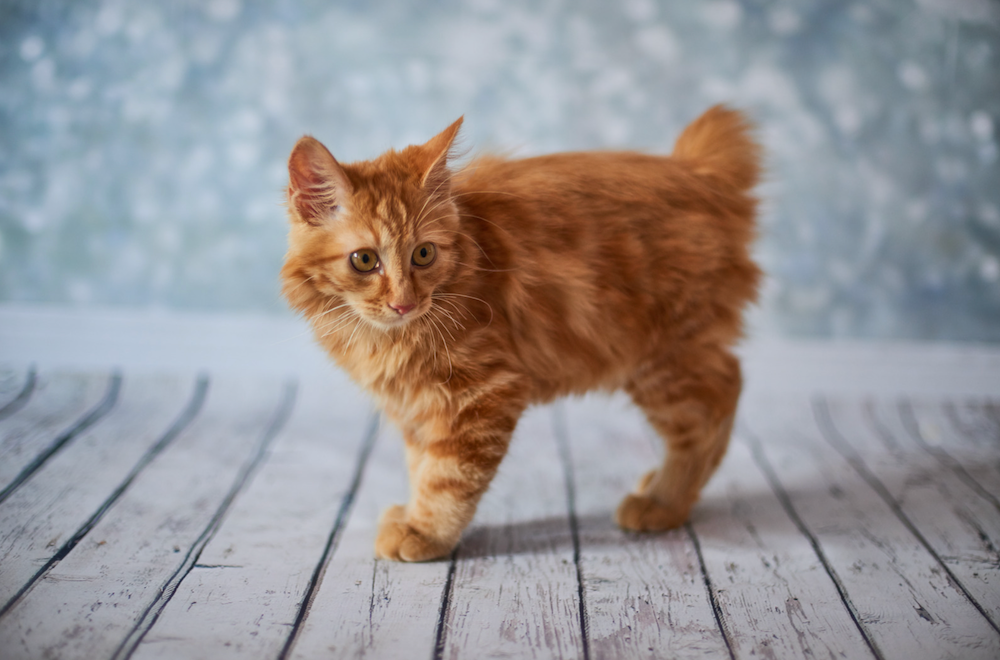 The short tail of the American Bobtail developed naturally as a means to improve survival in their native environment of the American Southwest. Although they look similar to a bobcat, they’re very domestic: This is a devoted family pet that even plays fetch.

This breed takes a while to fully mature (up to 3 years), and can weigh up to 16 pounds. As their origin suggests, they are adaptable cats and do well in a variety of environments. Their bobtail doesn’t hinder them in any way (but gives them a leg-up in the cuteness department, in our opinion!). 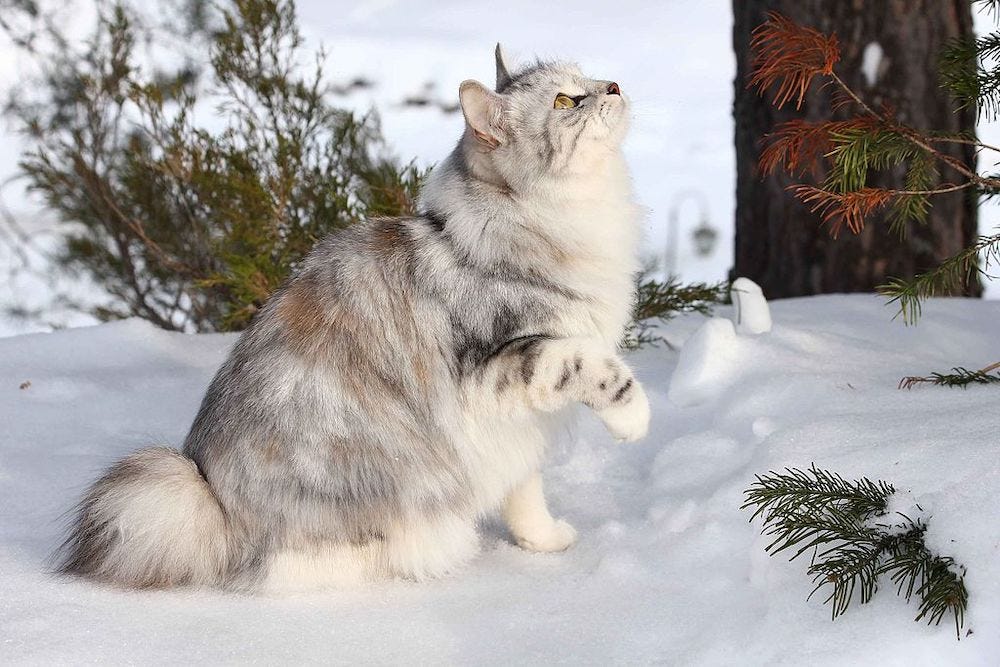 The Kurilian Bobtail is a natural breed that was found on Russia’s Sakhalin island and Kuril archipelago. They were brought to central Russia in the mid 1900s. The Kurilian Bobtail looks similar to a lynx and are known for their adorable “pom-pom” tails.

This breed loves playing in water. They’re good mousers and cuddly lap cats. Sociable and gentle, there’s an unstoppable combination of traits you could use to describe the Kurilian Bobtail.

The tail-free Manx was born and bred on the Isle of Man, for which the island is known. Because they began life as a mouser, they have retained these top-notch hunting skills. However, when they’re not on guard they are affectionate, people-oriented cats.

Unfortunately this tail-free mutation in the Manx breed can cause severe developmental abnormalities and even death in kittens and cats. If you are looking to have a Manx as a pet, be sure to adopt from a rescue group rather than perpetuate inhumane breeding practices. 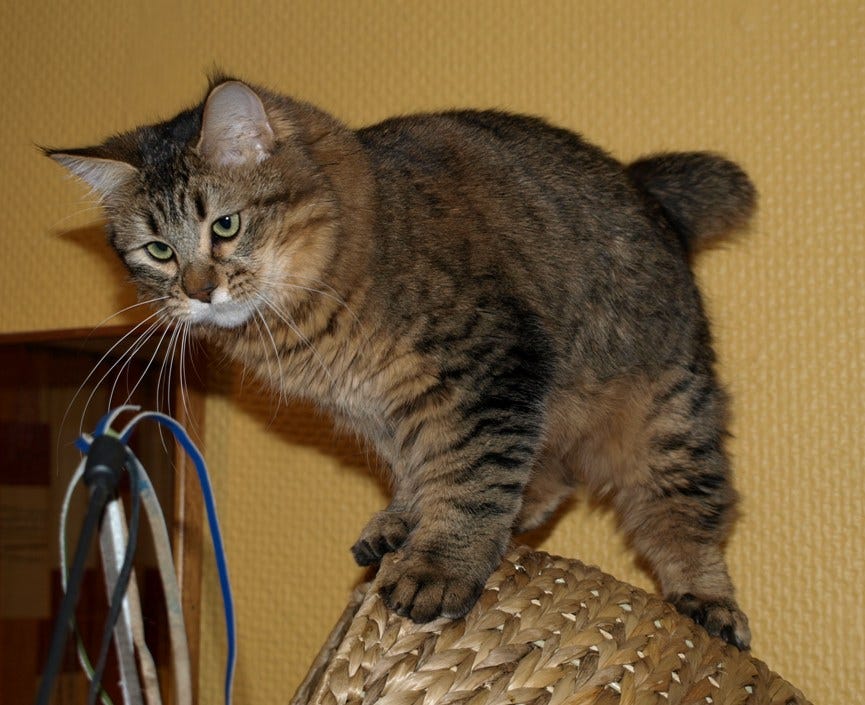 Of all the cats that look like bobcats, the Pixiebob has the most conflicting origin stories. One legend says that they can trace their roots to American bobcats. In actuality, the breed is simply a domestic cat with a tail mutation.

This breed was further bred to resemble the wild Coastal Red Bobcat found in the coastal mountains of the state of Washington. It is the only breed that accepts polydactyly (cats with extra toes) and comes in two coat lengths.

Haven’t had your fill of exotic cats? Visit your local shelter, zoo, or animal sanctuary!