The American Shorthair cat is a beloved and popular breed with many fond followers. This cat is treasured for their adaptable and friendly nature. They get along with just about any animal or person they come across.

These cats are athletic, natural-born hunters whose love language is gift-giving, so don’t be surprised if a little mouse shows up on your doorstep. And make sure to thank your American Shorthair for all the hard work they put into the catch. (We kid—please keep your kitties indoors!)

The American Shorthair is the breed you might think of when you think of the perfect family cat. While their coats come in various colors and patterns, their personality holds up across the breed, making them easy to fall in love with. 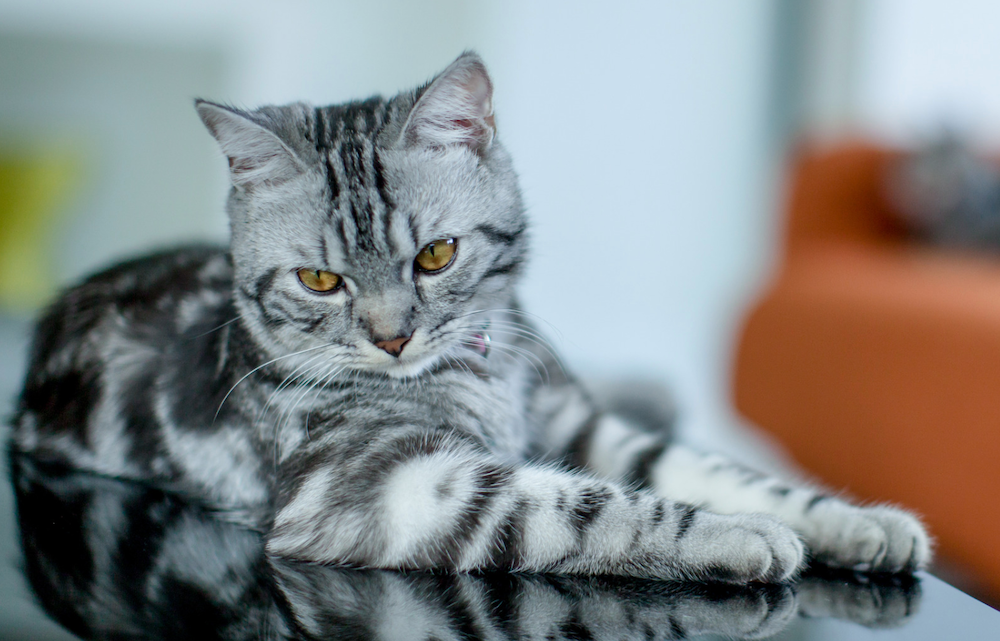 What are the origins of the American Shorthair?

American Shorthairs are often compared to Domestic Shorthairs—AKA mixed breed short-haired cats—but are, in fact, their own distinct breed. The American Shorthair can trace their lineage back to the Mayflower. Records show their ancestors were cats that came over on boats with European settlers and then helped to maintain vermin control in the colonies.

Over the next few hundred years, these cats survived the harsh New England weather with their thick coats and hunting instincts. Those that were able to adapt resulted in today’s American Shorthair.

This breed went from barn cats that kept the original American colonies clean and rat-free to well-respected house cats. Instead of keeping the barn in check, they took to the homes, transitioning to a more relaxed lifestyle.

Were they still catching rodents from time to time in the house? Likely. But did they ever have to fend for themselves to eat? Not once: They made themselves comfortable indoors! 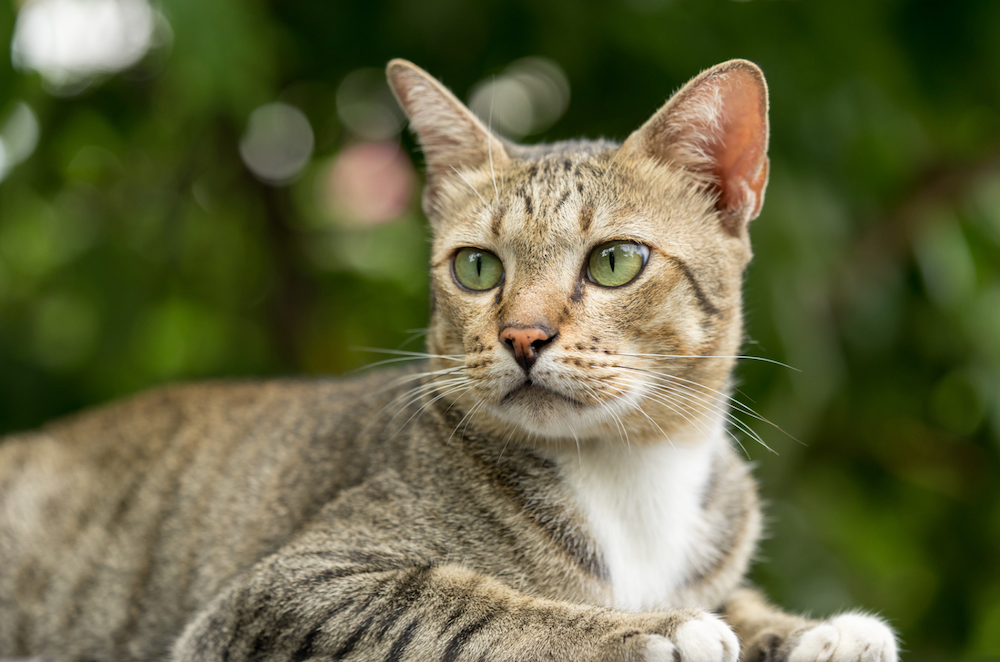 The American Shorthair cat has an athletic build with proportionate body parts, a large head, and large, wide-set eyes. They look very compact due to their strong legs and muscular body. These features helped them become extremely skilled hunters, which preserved their breed.

Their coats are short, thick, and dense, and has helped protect them from New England weather both centuries ago and today. Their fur is plushy to the touch, and comforting to pet.

American Shorthairs are medium-sized cats, and without proper exercise, they can become overweight. Though they might have been fierce hunters in their past lives, the American Shorthair cat has become well-accustomed to a lavish lifestyle of canned food, scratching posts, and catnip.

What colors do American Shorthairs come in?

American Shorthair cats can come in a range of coat colors and patterns, though you might recognize some more than others. That doesn’t mean that if your American Shorthair isn’t one of the most common, they aren’t part of the breed. They absolutely are! They’re simply more unique, which to some might be even more appealing. 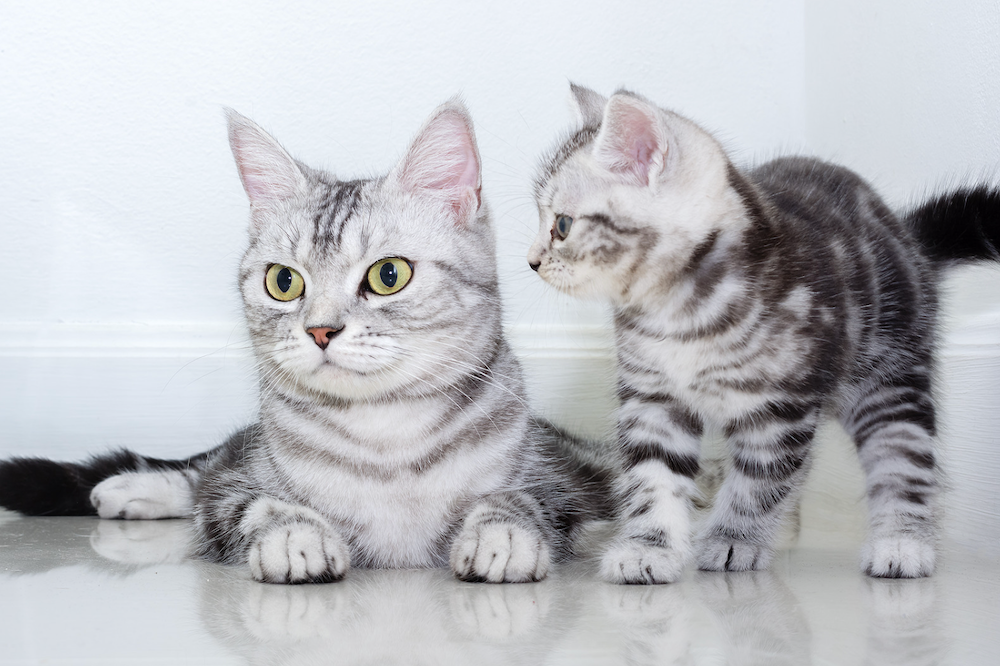 American Shorthair cats are best known for their black and silver classic tabby (swirl) markings. This pattern showcases intense markings that are darker than the base coat. They have rings stretching down around their legs, and the “necklaces” are broken, highlighting their strong chests.

The tabby pattern is often recognizable by the “M” mark on their forehead. This should be clearly defined and rather easy to see, and helps determine a tabby American Shorthair from other patterns. Tabby cats can display many colors, like brown, red (orange), blue (grey), and cream. You might come across any of these colors in the American Shorthair.

Some of the colors that a solid American Shorthair can come in are:

The bicolor American Shorthair has two distinct colors on their coat, one usually white, and the other brown, cream, black, or blue. These colors should not appear to be brindled but instead solid. Bicolor cats have enchanting golden eyes.

The bicolor American Shorthair’s coat is distinct and distinguished. The colors won’t bleed into each other and will be easy to differentiate. You’ll know it when you see it.

Tortoiseshell American Shorthairs showcase a mottled pattern of three colors. A tortoiseshell coat is far more prevalent in female cats, so this pattern is a bit rarer to come across.

There are different variations of color that a tortoiseshell American Shorthair might come in:

This kind of coat can be recognized by the darker ticks on the end of the fur tips on top of a white base coat. The color of the ticks can vary from red to black. This gives the cat a very sheer look that really catches the sunlight (especially when lying oh-so-cutely in a puddle of sunlight on your floor).

Different shaded versions of the American Shorthair fall into the following colors:

Caring for an American Shorthair 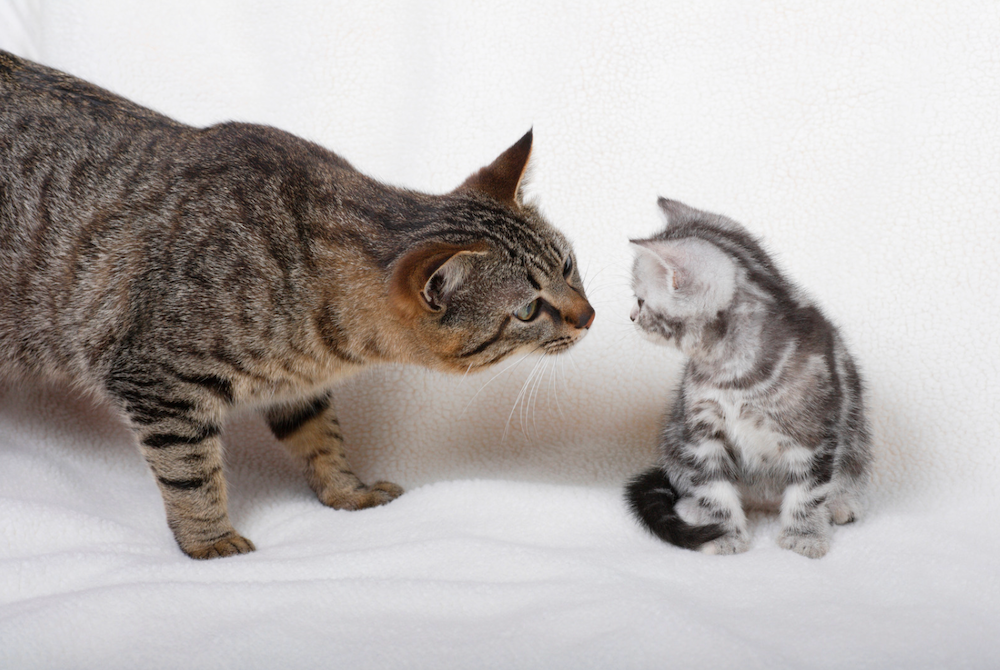 No matter what kind of American Shorthair ends up at your home, you’re bound to fall in love. The American Shorthair is a great cat that is family-oriented, playful, funny, and gentle. They make for a superb companion and are often considered lower maintenance than other cat breeds.

While they used to live outside in barns, hunting and fending off rodents, they much prefer their life of luxury now. This means they want a soft bed to sleep in, plenty of toys to keep them busy, and a clean space to use the bathroom (made easier with a self-cleaning litter box, of course).

Your American Shorthair cat will become your best friend. They are always there to greet you and give you love because they wait around all day for you to get home. These cats will bring you immense joy and comfort. 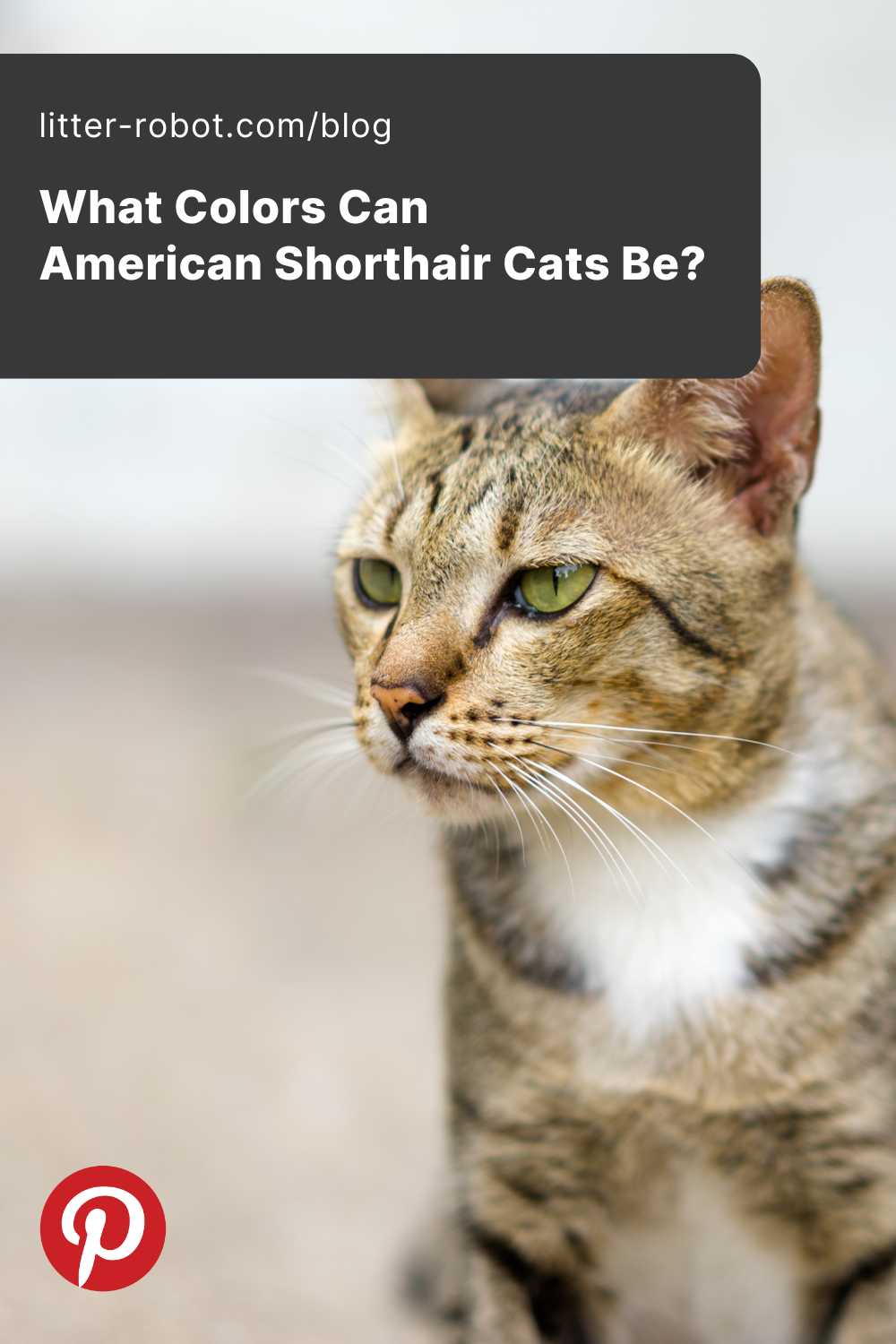