None of us wants to dwell on the ailments that come with old age—including those that arise in our pets. Most pet parents aren’t aware that older dogs and cats can develop dementia, just as people can. While little research has been done on the subject, it’s important to understand the signs of cat dementia, as well as the potential treatment options.

What is cat dementia?

Feline cognitive dysfunction syndrome (CDS) is comparable to dementia or Alzheimer’s disease in humans. It is unknown how many cats develop CDS, but the risk increases once cats are 10 years of age or older. Veterinary specialists also aren’t sure why dementia arises in some cats and not others—but genetic factors likely play a role.

Signs of dementia in cats generally start out mild, gradually worsening over time. This is known as cognitive decline. Symptoms of cat dementia may include any of the following:

Increased or excessive vocalizations have been observed in cats with CDS. This may be related to general confusion or disorientation of their surroundings, especially in the dark.

Jackson Galaxy, AKA Cat Daddy, offers a related anecdote about one of his previous senior cats: “When the lights went off at night before bedtime, [he] would start bellowing like an injured seal… I felt that his ‘seal bellow’ was a reflection of primal fear bordering on mortification. It was his very connection with territory that was threatened. And that’s when I realized for sure it was more than just ‘loss of vision’ going on. In any prey animal in general—and cats in particular—loss of that territorial mojo turns into panic in a heartbeat.”

Urinating or defecating outside of the litter box

Litter box habits may go by the wayside with cat dementia. Because cats are so fastidious about using a clean litter box, first make sure the issue doesn’t stem from a dirty litter box. If your cat is urinating or defecating in odd places around the house, this may be a sign of illness.

You may find that a senior cat is anxious at night, especially if he’s losing his vision. He may become agitated or disoriented when everyone goes to bed. And in general, he may seem cranky or irritable. This could be due to not recognizing family members or feeling stressed in even the most normal conditions.

Excessive licking or lack of grooming

Cats are more or less meticulous about grooming themselves. Take note if you see your cat excessively licking himself or other objects (even you!). At the opposite end of the spectrum, it’s usually cause for concern if he has stopped or greatly reduced grooming himself.

Sadly, cats with CDS may simply forget to eat. If you notice your cat’s food is often untouched or your cat is losing weight, this is a sure sign that he needs to see the vet.

Finally, pay attention to whether your senior cat is sleeping more than usual, seems sluggish, or exhibits changes in his sleep cycle.

Diagnosis and treatment of cat dementia

If you notice any of the above symptoms in your cat, regardless of his age, make an appointment with your veterinarian. All of the signs of cat dementia could be attributed to other diseases or conditions, particularly urinating or defecating outside of the litter box. Your vet will likely perform a physical examination, run blood tests, and take ultrasounds and X-rays. Once he or she rules out illnesses associated with the exhibited symptoms, they may determine that your cat has CDS.

As with dementia and Alzheimer’s disease in humans, there is no cure for cat dementia. However, you can improve your cat’s quality of life in many ways:

Can you prevent cat dementia?

You may be able to ward off cat dementia by taking the necessary steps to enrich his cognitive health. When your cat turns 10, talk to your vet about a balanced diet and introducing supplements. If you haven’t already established a daily interactive play routine, start now.

If your cat was diagnosed with CDS, you’re entitled to feel sad or distressed. Just remember that with the right care and attention, cats with dementia can still have happy, fulfilling lives. 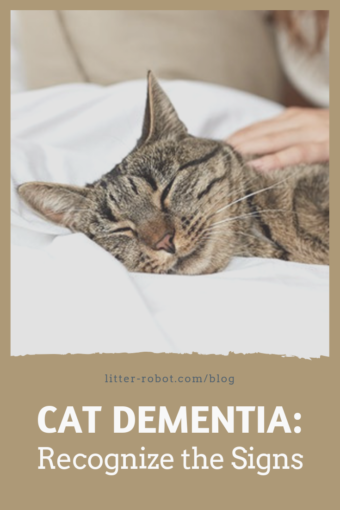