Why Does Cat Pee Smell So Bad?

There’s perhaps no smell more distinct—or distinctly nose-wrinkling—than that of cat urine. But why does cat pee smell so bad? And why does it smell so much worse than dog urine? Litter-Robot’s resident veterinarian Dr. Justine Lee weighs in on this pungent mystery in the video below.

As Dr. Lee explains, cat pee smells so bad because cats have very concentrated urine. Cats originated from the desert and evolved to absorb a large amount of water from their urine to maintain their hydration. This is also why you hardly ever see cats drink—they’re so effective at concentrating!

In her book It’s a Cat’s World… You Just Live In It, Dr. Lee writes that a cat’s loop of Henle (the part of the kidney that results in filtration and concentration) is so good at squeezing out every last drop of absorbable water that this concentration makes the urine smell very foul.

Cats also have much stronger concentrated urine than dogs. Dogs’ urine is much more diluted, meaning it is less foul and less yellow in color than cats’. The good news for cat parents is this means cats urinate less frequently than dogs.

How to get rid of cat pee smell

Getting hit with a whiff of cat pee smell anywhere other than the litter box is mildly terrifying, because every cat parent knows how difficult it is to eviscerate this particular odor.

If your cat is urinating outside the litter box, there are a few ways to get to the root of the problem: 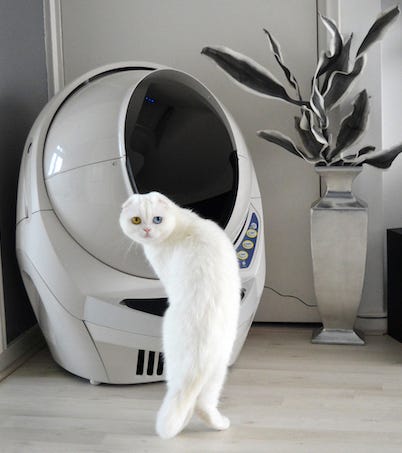 Cats are fastidious about a clean litter box, especially if they’re sharing with a feline sibling or two. Keep in mind that you should have one more litter box than the number of cats in the house—so if you own one cat, you should have two litter boxes and be scooping them once a day.

Another option is to invest in the Litter-Robot, whose patented self-cleaning cycle ensures a clean bed of litter after every use. The Litter-Robot sifts waste within minutes, and the carbon-filtered, fully enclosed waste drawer is designed to greatly reduce unpleasant odors. Plus, three to four cats can use one Litter-Robot!

Pay attention to changes in their environment

Your cat may be peeing outside the litter box because of a sudden change in his environment. In other words, your cat may be taking his anxiety out on you by making where he is not supposed to make! Consider whether there are any new stressors in his life, and how you can minimize his exposure to these possible factors.

Male cats that have not been fixed have the added effect of testosterone, making their urine smell even more foul. Neuter your cat before eight to nine months of age to combat this extra stinkiness and to minimize behavioral problems like marking or spraying around the house.

Take your cat to the vet

Urinating outside the litter box may also be a symptom of a medical issue. Take your cat in for a quick examination and a few routine tests so your vet can rule out a urinary tract infection, urinary crystals, kidney disease, and diabetes.

Get friendly with enzyme cleaners

The most effective way to get rid of cat pee smell is with enzyme cleaners (found in pet stores or online), which actually break down the acid in cat urine, helping to get rid of the smell at the same time. These cleaners contain natural enzymes and helpful bacteria to get rid of the bad bacteria causing the unpleasant odors. Make sure to liberally douse the affected area with enzyme cleaner (rather than lightly spraying it as the bottle might say) and let it sit for 10-15 minutes before blotting.

Some people have found that a mixture of household ingredients like vinegar, hydrogen peroxide, and baking soda are effective at removing a urine stain, but often times this trick will only temporarily neutralize cat pee smell. When it doubt, try both types of cleaners!