Munchkin Cat Colors: What Colors Can Munchkins Be?

Although they’re 3 inches shorter than an average-sized cat, you could argue that the Munchkin has double the spunk and character of other breeds. They are beloved for their kitten-like energy that lasts throughout their lifetime, along with their miniature appearance.

If you didn’t notice their legs at first, you might think that you’re dealing with an average-sized cat. They look and act just like any other cat, but from the legs down, it’s clear there is a difference.

Munchkin cats are their own breed, but have been crossbred with other breeds to create many variations of short-legged cats. Therefore, a Munchkin’s coat color and patterning can vary greatly, but you’ll always be able to tell their breed by their shortened legs. 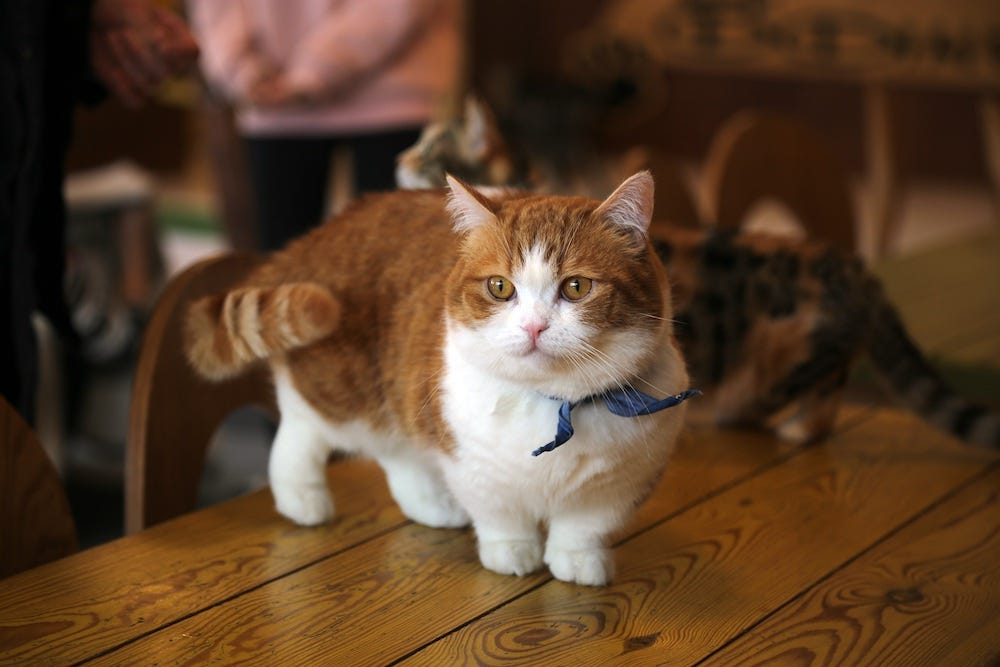 History of the Munchkin cat

Short-legged cats have likely existed for centuries, as the genetic mutation responsible can occur in any litter. Today's Munchkin cats can be traced back to two cats from 1980s Louisiana, called Blackberry and Toulouse.

When a pregnant Blackberry was found scared and ready to give birth at any moment, she was taken in by a music teacher and cared for. When she gave birth, she had a mixed litter of kittens with long legs and short legs. One kitten stood out, Toulouse, who was then bred to Blackberry to create more short-legged cats.

To get a litter of Munchkin cats, you must mate a Munchkin with another breed of domestic cat. This is because the gene for short legs is an autosomal dominant gene and will express if passed down. There is a 50% chance that kittens with one Munchkin parent will have the same mutation. These cats are considered to be Munchkins while the others aren’t.

If you breed two Munchkin cats together, it’s unfortunately lethal. The embryo will not survive inside the womb.

A Munchkin cat looks just like any other cat, but with legs that are 3 inches shorter. They are often referred to as “sausage cats” because, despite their short legs, all other parts of their body are proportioned to a regular-sized cat.

They have very long bodies and tails that make them the size of other small breeds. Some even reach up to 18 inches long.

How different are Munchkin cats from other cats?

The only difference between a Munchkin cat and other cat breeds is their shortened legs.

Munchkins are just as energetic and lively as other cats, and they don’t seem to recognize that they are much shorter than just about anyone—cats, dogs, kids, and adults. What matters to them is that they have someone to play with.

Munchkin cats use their little legs to their advantage. They are extremely quick and nimble because they have a better center of gravity. They can whip around corners and hide from you more easily, and then BAM—tag, you’re it!

Munchkin cats can have either long or short coats, which gives them various looks. Their versatility adds to their appeal: Not only do their legs make them unique, but so do their coat colors and patterns. Every litter of Munchkin kittens will be different from the next.

Even their eye color can vary, including gold, blue, green, or even copper. The only consistent thing about Munchkin cats? Each will have their own amazing personality.

What colors do Munchkin cats come in?

There is no wrong coloring or pattern in a Munchkin. They can display any color or pattern, including any combination thereof. This includes white, black, red, brown, blue, cream, lavender, as well as tabby, bicolor, calico, pointed, mink, tuxedo, or tortoiseshell. These combinations are endless, which means no matter what Munchkin cat you end up with, they will be easy to distinguish as yours.

Some cat breeds look so similar you might need to double-check that you didn’t bring home the wrong one from the vet. On the other hand, the Munchkin cat is very easy to tell apart because they will have their own distinct coloring, coat length, and eye color. 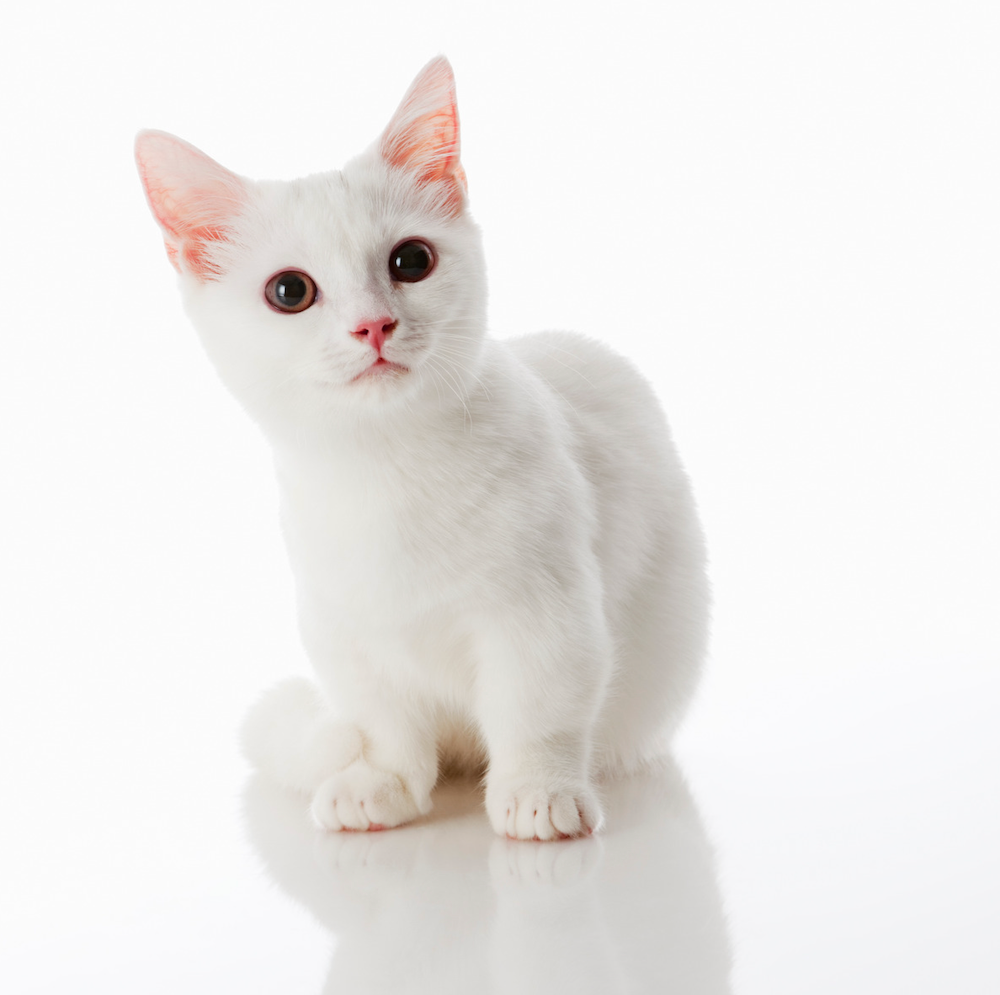 Solid-colored Munchkins can be produced in any litter of Munchkin cats. Whether your Munchkin is black, brown, white, or any other solid coloring, they will be an adorable addition to the family.

Solid colors are common in Munchkin cats, but you might find that when you begin selectively breeding Munchkin cats to different breeds, the coloring and pattern will vary.

For instance, if you breed a Munchkin and Persian cat, you get the Napoleon cat breed, a long-haired, short-legged Munchkin cat with the Persian features of a snubbed nose and round face. The Napolean can come in a variety of colors but will likely be solid, especially if the parents are both solid.

What are the patterned Munchkin variations?

Patterned Munchkins are where you see the most variety in appearance, but selective cross-breeding between other breeds of cats has influenced distinct looks. 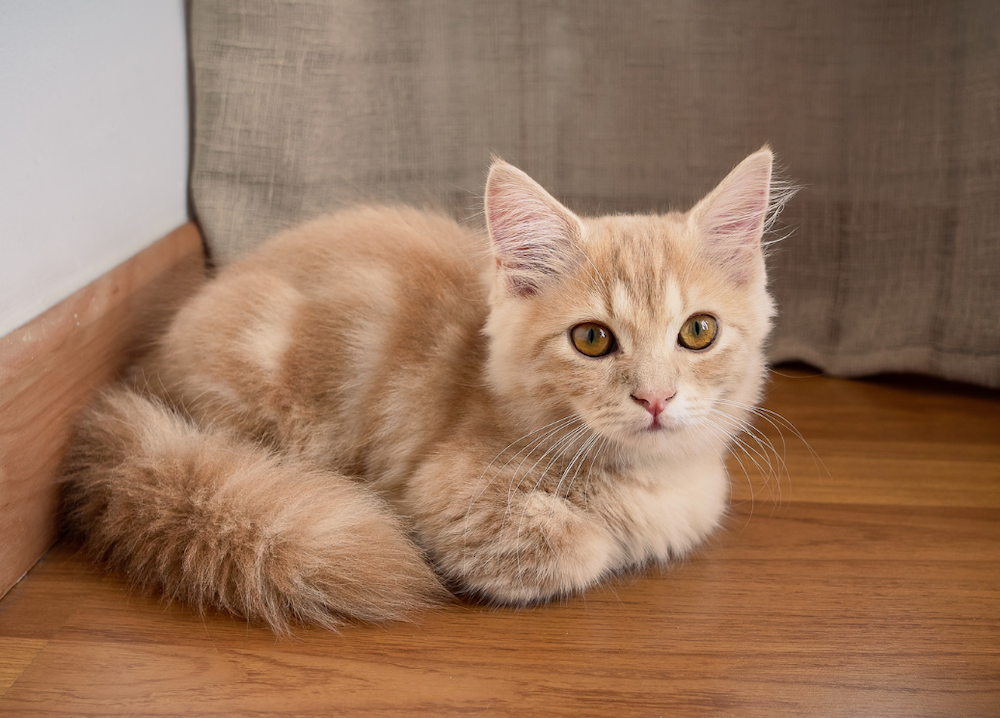 Munchkin cats with tabby coats are both unique and adorable. A tabby coat is a very popular and well-known pattern because of its stripes and blotches, pencil lines around the face, and the distinctive “M” on top of the forehead. Tabby cats come in all colors and can have several variations of markings on their bodies. 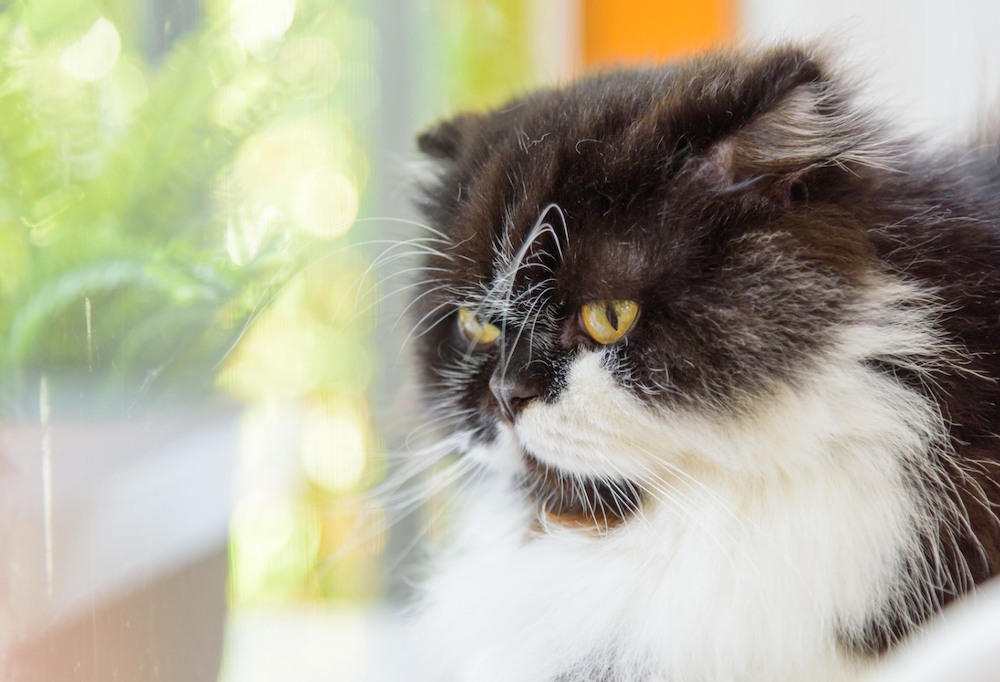 Bicolor cats will have a combination of two different coat colors, usually white combined with something else.

Bicolor cats might have white chests, feet, and tips of tails, along with black or tabby spots and markings across their face and backs, which (when black and white) wins them the dapper name “tuxedo cats”. The pattern of a bicolor cat really varies, but it can be easy to tell a bicolor coat from other coats. 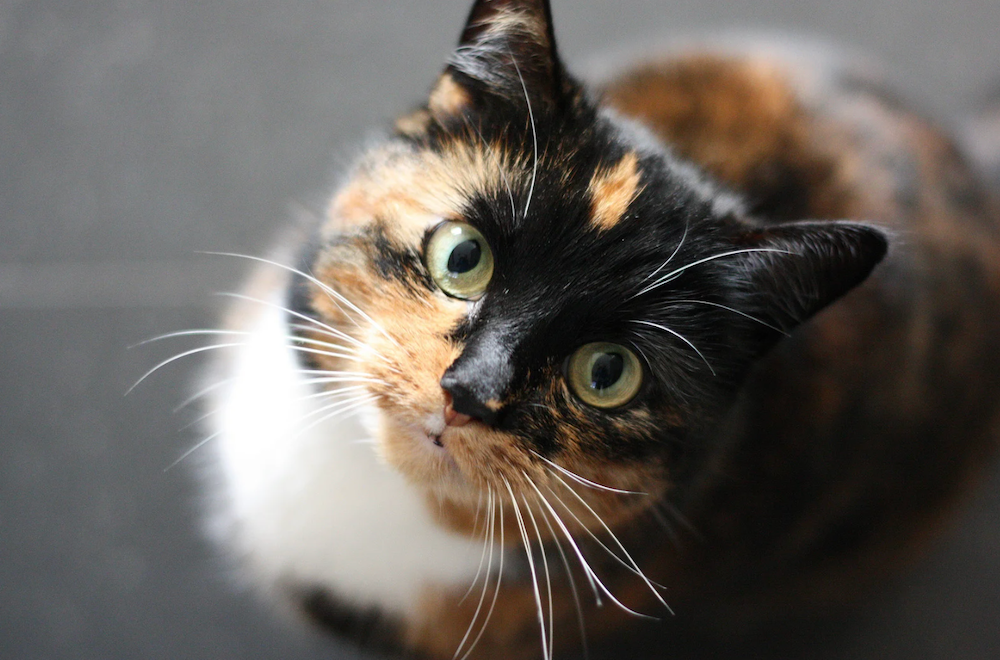 The calico coat is one of the more common Munchkin cat coat colors. This happens when a Munchkin cat has three colors combined on the coat, usually in a very distinct pattern. Typical colors include red (orange), black, and white.

Interestingly, 99.9% of calico cats are female—so if you see a calico Munchkin, you won’t even need to ask if she should be spayed (yes) vs. neutered! 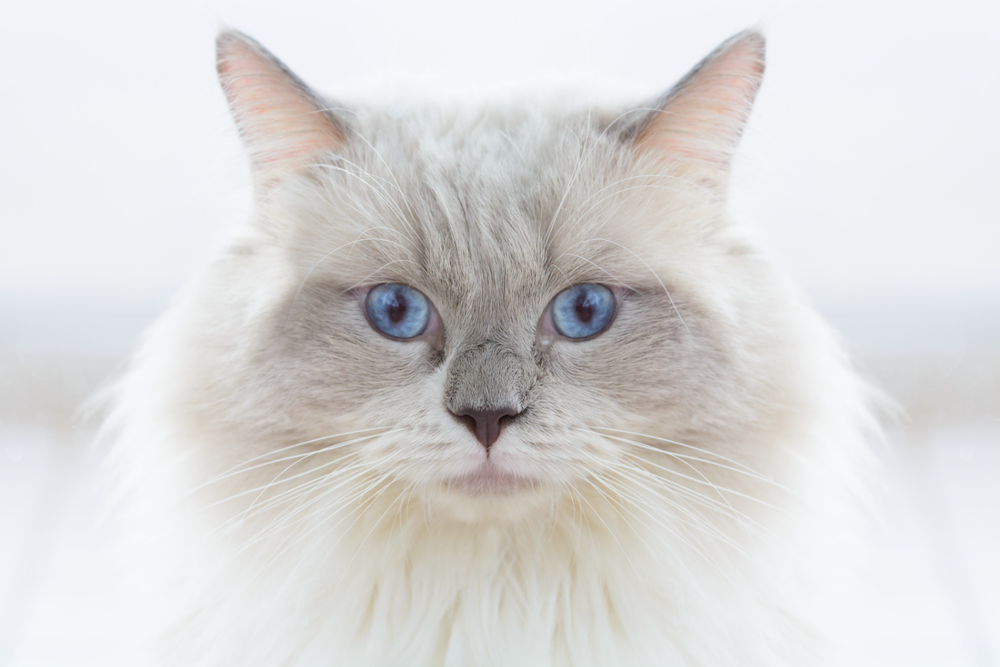 You might come across a pointed Munchkin and find that they look very similar to other pointed cats. If you were to breed a Siamese cat and Munchkin, you would get a cat with short legs, wide eyes, and a pointed coat. Their faces, ears, tails, and paws would be significantly darker than their bodies but might turn the same color as they age.

It’s fun to imagine what any kind of cat mixed with a Munchkin would look like because it can feel a lot like having a “forever kitten.”

Tortoiseshell coats are another very distinctive coat pattern that Munchkin cats can have. This occurs when two colors other than white combine and give the appearance of a tortoise’s shell. Usually, the colors are black and red (orange) but can range in their shades.

Most tortoiseshell markings will have little to no white, which helps distinguish them from calico cats. Like calicos, tortoiseshell cats are 99.9% female.

The best thing you can do for your Munchkin’s coat is brush it regularly to minimize shedding and, if your Munchkin is long-haired, keep it from tangling. This can be made easier by regular grooming sessions, using a self-cleaning litter box that keeps their litter bed fresh (these kitties are low to the ground, after all), and providing baths when necessary.

If you’re planning to adopt a Munchkin cat, be prepared for anything: You could make one hundred suggestions before correctly guessing what your Munchkin will look like, and how cool is that? These little guys have so many looks to serve and so much love to give—what more could a pet parent want? 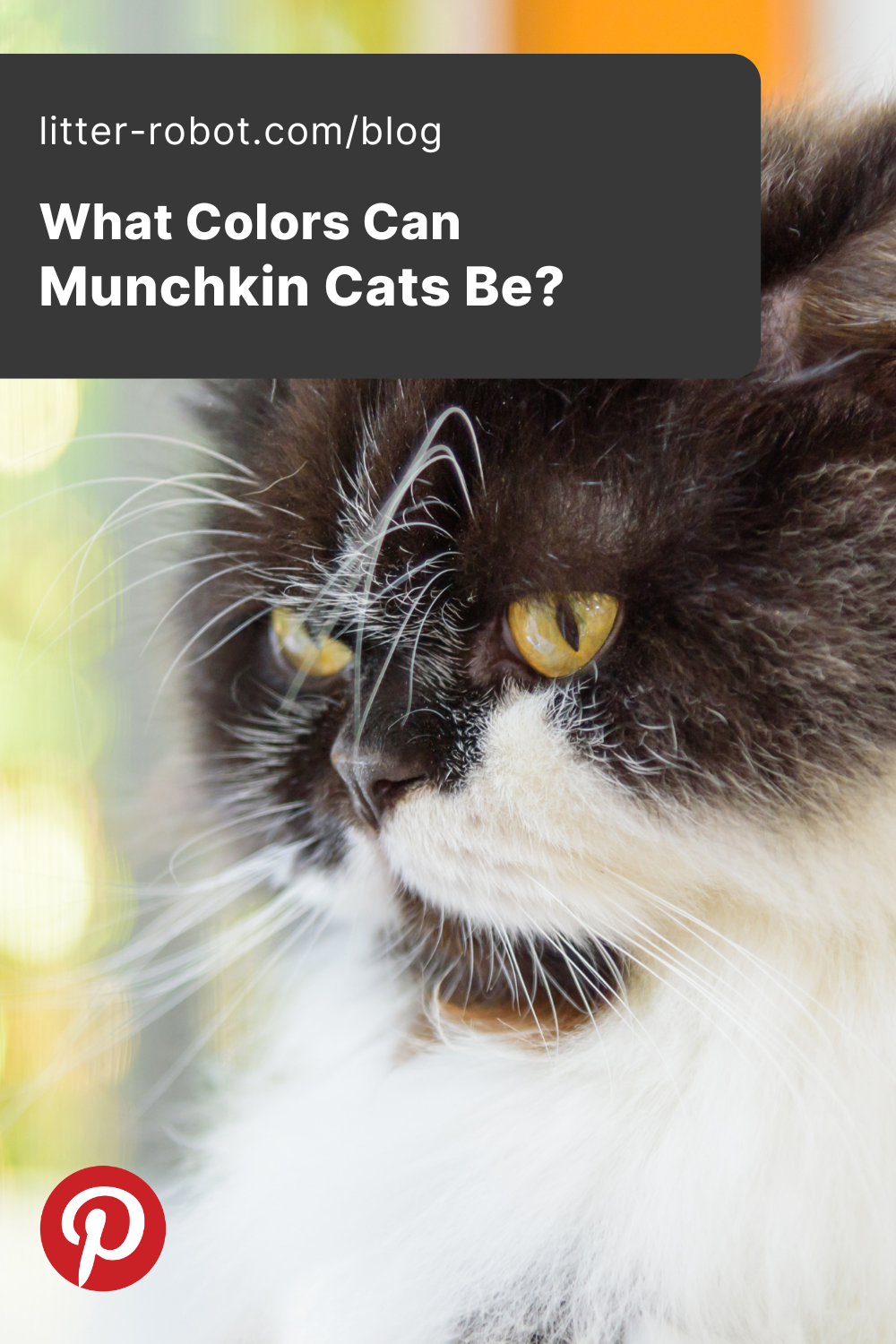