As a culture, we love “chonky” cats. So how do you know if an adorably chubby appearance is actually problematic for your cat’s health? Studies continue to reaffirm what most of us already know: Pet obesity is on the rise—and so is the average cat weight. But what is considered a healthy cat weight? Find out where your cat falls on the spectrum, and what you can do if your cat is overweight.

It’s confirmed: Cats are getting fatter

What do 19 million cats tell us about the average cat weight? That it’s going up.

In July 2019, the Journal of the American Veterinary Medical Association published the results of a 35-year study that looked at the weight of 19 million cats in the U.S. and Canada. The study confirmed that most cats continue to put on weight as they age, and that average cat weight is on the rise.

Findings from the study include these interesting tidbits:

One thing the study did not explicitly state? The average cat weight. This is likely because it’s difficult to measure a cat’s health by weight alone. We’ll explain more in the next section.

What is a healthy cat weight?

So, what does a healthy cat weigh? It’s tempting to reduce all cats to the same standards—saying, for instance, that a healthy cat weight is around 10 pounds. Yet this isn’t an entirely effective way to determine health, owing to the fact that breed, age, and gender all play a factor. For instance, a 10-pound Maine Coon may be considered healthy (even petite for his breed!), while a 10-pound Bambino cat would be considered obese.

Instead, many veterinarians follow the Purina Body Condition Score (BCS), which basically boils down to using your eyes and your hands. The BCS describes three factors you’ll find in a cat with an ideal body condition:

With 60% of cats in the United States considered overweight to obese, it’s safe to say that the average cat weight is too high.

Why is a healthy cat weight so important?

Litter-Robot resident veterinarian Dr. Justine Lee sees a diabetic cat at least once a day in the ER. Why so often? Because there is a growing prevalence of insulin resistance secondary to obesity.

It’s so important to work toward a healthy cat weight because overweight cats are at increased risk of the following serious medical conditions:

How to help your cat lose weight

Dr. Lee wrote a great post about how to exercise an obese cat. Of course, lack of exercise isn’t the only factor likely contributing to your cat’s extra pounds. Often you will need to begin by tweaking your cat’s diet.

Cut back on portion size

Dr. Lee emphasizes that you should be feeding for what your cat should weigh, not what he does weigh. Consider cutting back on the amount of kibble by at least 25%. Many pet food packages include charts for how much to feed your cat per day. If you have a 12-pound cat that could stand to lose a couple pounds, follow the chart’s recommendation for a 10-pound cat, and so on.

Talk to your veterinarian about a lower-calorie cat food. Also make sure you are not feeding your adult cat kitten food, which contains more calories.

You might also consider switching to a wet food diet. Dry kibble usually contains carbs and starches that are unnecessary for carnivorous cats. These carbs may lead to weight gain or digestive issues. A wet food diet contains the moisture your cat requires, and should lack the grains and refined carbs he doesn’t need.

Use an automatic feeder

Free-feeding (or giving your cat his daily portion of food all at once) can be problematic for certain cats. While some cats may graze throughout the day, others will gobble the food in one sitting—then beg for more. With an automatic cat feeder, you can schedule smaller feedings throughout the day and resist the urge to keep filling up the bowl. 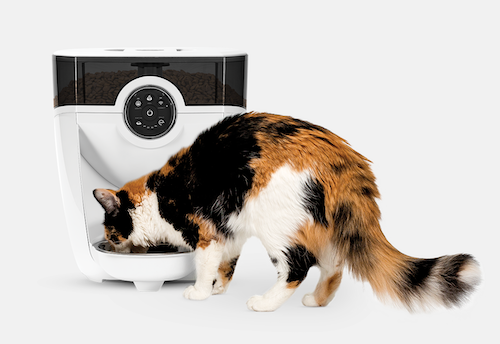 An automatic, WiFi-enabled pet feeder like the Feeder-Robot allows you to deliver portion-controlled meals even when you’re not home. Set customizable feeding schedules from the app or the control panel, and rest easy knowing your kitty will be fed the right amount on time, every time.

Food puzzles force your cat to slow down to eat and “play,” or work to earn his kibble. Dr. Lee suggests that, at the least, you can use something as simple as a clean muffin pan so your cat doesn’t gorge and eat all at once; instead, he is forced to “forage” for his food and eat more slowly.

Finally, you’ll want to find ways to get your cat more active! Try these tips:

What is a healthy weight for a domestic shorthair cat?

What is a healthy weight for a Maine Coon?

Maine Coons are considered one of the largest domestic cat breeds. Males can weigh up to 25 pounds and females up to 18 pounds. A healthy weight for Maine Coons depends on gender, but typically ranges between 8-20 pounds.

What is a healthy weight for a Persian?

Lazy, fluffy Persians aren’t called “furniture with fur” for no reason. This breed weighs 7-14 pounds on average, but you’ll want to ensure there’s not too much flub going on underneath all that fur.

What is a healthy weight for a Ragdoll?

Ragdolls are another large cat breed, with males and females both weighing up to 20 pounds. Like the Persian, you’ll want to keep a close eye on your Ragdoll’s body condition underneath their luxurious mane.

What is a healthy weight for a Sphynx?

What is a healthy weight for a British Shorthair?

British Shorthair cats tend to be sturdy, often appearing on the pudgy side. Indeed, this breed usually weighs between 9 and 18 pounds. Use the Purina Body Condition Score to see if your British Shorthair is perhaps a bit too “sturdy.”

What is a healthy weight for an Exotic Shorthair?

Exotic Shorthair cats have a cobby build similar to British Shorthairs. They’re typically smaller than their cousins “across the pond,”  however, weighing 8-13 pounds.

What is a healthy weight for an American Shorthair?

Known for their classic tabby pattern, American Shorthair cats are typically muscular, medium-build cats that weigh between 7 and 12 pounds.

What is a healthy weight for a Devon Rex?

The curly-haired Devon Rex cat is considered a small cat breed, usually weighing between 6 and 9 pounds. No wonder they’re known for their “elfin” face and mischievous “impish” expression!

Don’t become too preoccupied with the average cat weight. Instead, focus on helping your feline family member get to a healthy cat weight!

Is 12 pounds overweight for a cat?

Depending on breed and gender, 12 pounds is not necessarily overweight for a cat. 12 pounds is perfectly healthy (and even on the smaller side) for large cat breeds like Maine Coons, Ragdolls, and Bengals.

How do I know my cat is overweight?

If you cannot feel your cat’s ribs, view a clear waistline from above, or view a tummy tuck from the side, your cat may be overweight.

Is 7 pounds small for a cat?

7 pounds is not necessarily small for a cat, depending on breed and gender. Female cats tend to weigh less than males. One sign a cat is underweight is if their ribs are highly visible.

Is my cat fat or fluffy?